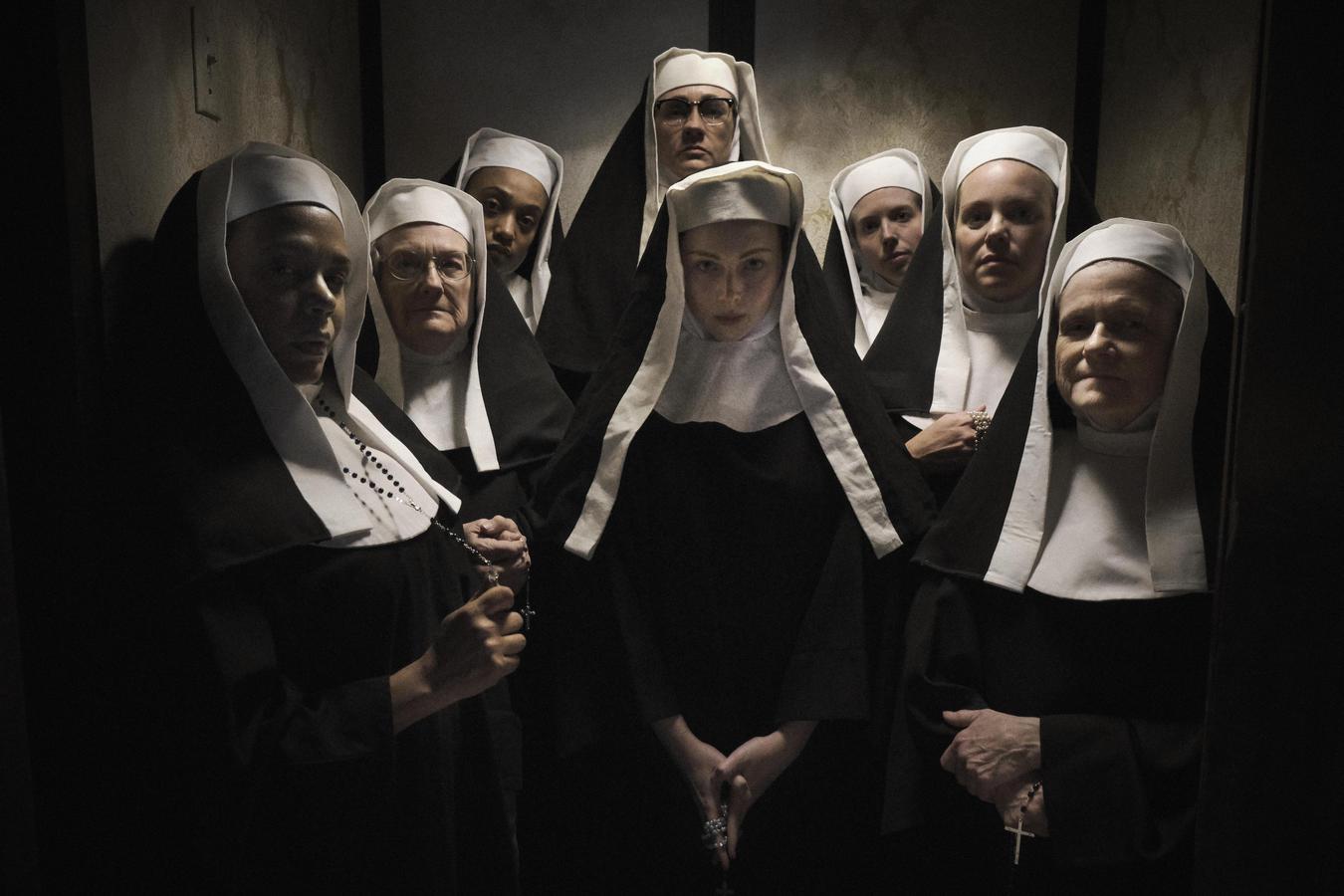 The setup of writer-director Mickey Reece’s Agnes sounds like the typical starting point for a gauntlet of spiritual horror. At the start of the film, the eponymous nun (Hayley McFarland) is seen having a profane and apparently telekinetic outburst over dinner with her fellow sisters, after which two priests are dispatched to perform an exorcism on her. They’re a typically mismatched pair, the fresh-faced Benjamin (Jake Horowitz), who’s just about to take his vows, and Father Donaghue (Ben Hall), an older and jaded mentor of sorts who has no illusions about the religious politicking that’s led to their marching orders.

Having privately admitted to molesting children, Donaghue is set to be marooned in some far-off parish, treated as more of a nuisance than anything else. When Benjamin raises concerns about the church’s coverup, the other priests joke that he’s not nearly young enough to be at risk. There’s a sense in this scene that Benjamin and Donaghue are being set up to fail. Donaghue, for one, isn’t a typical advocate for exorcisms, believing the practice to be less spiritual than therapeutic (he dismisses it as “medieval woo-woo”). To him, the role of exorcist is more a position of authority that he generally seems more comfortable with than any strict belief in scripture, and his general disregard of custom suggests that perhaps he feels similarly about priesthood in general. For his part, Benjamin is still young enough to be a true believer.

Throughout the film, Reece is most interested in such differing representations of faith rather than traditional horror. Indeed, beyond a couple of floating dishes, some echoing voice filters, and the bloody results of gnashing teeth, the terror quotient in Agnes is rather low. That, though, is never to the film’s detriment, since its rich tapestry of characters quickly takes precedence. People like the oily celebrity priest Father Black (Chris Browning) and Mary (Molly Quinn), a young nun who took her vows after losing a child, further complicate the film’s idiosyncratic perspective and deepen its relationships. As Agnes’s closest confidant, Mary has much of the Mother Superior’s (Mary Buss) displeasure projected onto her, while Donaghue plainly enjoys the attention from a group of women unaccustomed to communing with men.

In weirdly and memorably seriocomic fashion, Agnes intentionally muddies the apparent demonic presence at its center. Its main characters’ behavior is bizarre but possibly tied to the strict, fervent devotion demanded from someone of her station, and the film’s true believers, like Father Black and the Mother Superior, tend to be unreliable, clearly savoring the authority that they’ve been ascribed. Here, possession (or whatever it may truly be) is portrayed as something that may be lived with and acclimated to, as Mary remarks that her most honest, fulfilling conversation with Agnes happens while the woman is said to be in some demon’s thrall. As in The Witch, zealotry may instead push people to the closest alternative.

Midway through, Agnes abandons its exorcism conceit and switches to Mary’s perspective some time after she leaves the convent. She struggles to make rent while doing cashier work for a low wage under harassment from a scuzzy boss (Chris Sullivan), finding herself in exactly the sort of position that, well, might lead someone to take their vows in the first place. Throughout this extensive stretch of the film, Reece’s script homes in on the young woman’s search for something new to be devoted to and live by, which she finds briefly in the company of a stand-up comedian (Sean Gunn) who was once a lover and teacher to Agnes.

As such, Anges files religion alongside other power structures that can provide comfort and stability but also create space for abuse of the power dynamic. The film is neither an explicit condemnation or celebration of earnest belief, but rather a thoughtful examination of the human desire for it and the accompanying hope that it may exorcise the emptiness we feel.