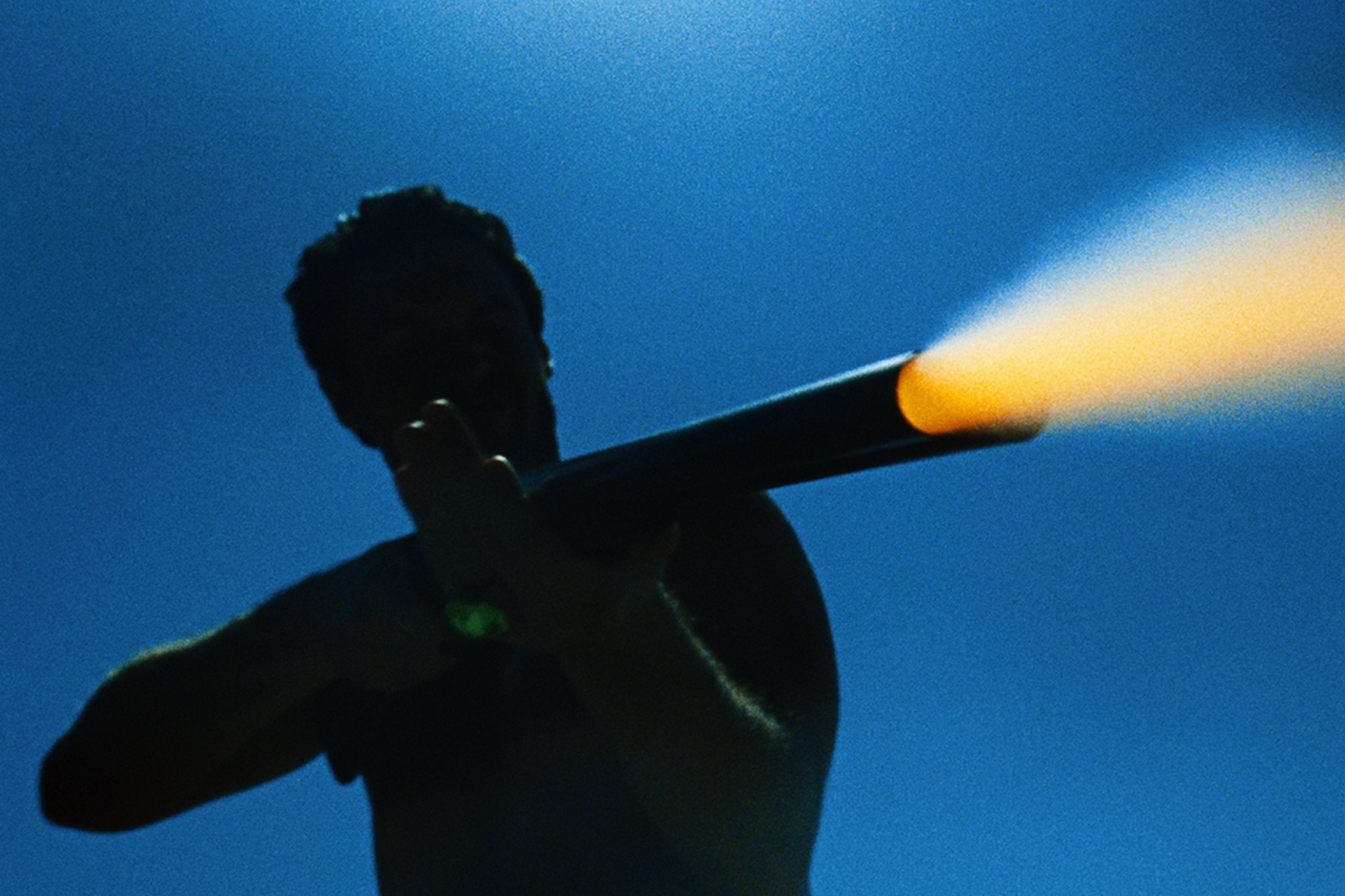 For Let the Corpses Tan, Hélène Cattet and Bruno Forzani trade the giallo stylings of Amer and The Strange Color of Your Body’s Tears for a wild heaping of spaghetti-western psychedelia. The married French filmmakers may be fixating on a new genre, but their deliriously abstract and meta approach to their craft remains intact. In fact, the shift in genre focus only gives them new objects and landscapes with which to play their formalist games.

Beginning with the sound of gunshots as paint splatters on a canvas, Cattet and Forzani announce their intent to elevate style above all else. What follows is a deliriously gleeful, rapid-fire montage of sound and image: extreme close-ups of burning cigars that threaten to set fire to the very image of the film, landscapes refracted through sunglasses or the flames of a lighter, the crackling of meat roasting over a fire, and enough creaking leather to make Kenneth Anger blush. Let the Corpses Tan is driven by sensory overload—its formal elements pieced together in rhythmic crescendos designed to titillate not with sex or violence, but through sheer cinematic inventiveness.

The 250 kg of gold at the film’s center is a McGuffin designed merely to jump-start the relentlessly vicious battle between a group of crooks, a couple of cops, innocent townspeople, and Luce (Elina Löwensohn), a mysterious painter who may or may not have started a sex cult decades earlier in a radiant coastal town in the south of France. The logic of this most dangerous game, all shifting allegiances and backstabbing, matters less than the thrill of Cattet and Forzani’s artistry. Lust is rendered in close-ups of flesh and sounds of orgasmic pleasure, while greed is conveyed by glimpses through fire, or in reflections on the elusive gold bars, which eventually explode into clouds of glitter and paint. Every part of Let the Corpses Tan, from its actors and setting to the objects on screen, is broken down to its elemental function as a conductor of the filmmakers’ carefully orchestrated style.

With repeated shots of ants crawling over a god’s-eye view picture of the town, the film toys with the notion of everything on screen being part of a grander scheme of manipulation, possibly from behind the camera. These shots are blunt in their suggestion of greater forces at work upon the on-screen action, but this idea is amusingly complicated by inserts of a goddess, possibly a younger Luce, engaged in fetish games involving ropes and skulls. In one extreme low-angle shot, the woman is smeared with gold paint before she urinates onto the town below her. Ultimately, whether the film’s gold bars are actually made of gold or are simply paint or piss is irrelevant. Let the Corpses Tan is determined to transform everything it touches into the purest of formalist fodder: a seemingly endless rush of color and sound.

After opening on a serene sequence of two deer wandering around a snowy forest, Ildikó Enyedi’s On Body and Soul cuts to the Budapest slaughterhouse where Endre (Géza Morcsányi) works as a manager. The graphic brutality of the slaughterhouse’s daily grind is a stark contrast to the film’s initially idyllic imagery—a fitting juxtaposition for an offbeat film that is at heart an opposites-attract story. After the beautiful but extremely awkward Maria (Alexandra Borbély) shows up as the site’s new quality control inspector, she and Endre coincidentally come to realize that they recently shared the same dream, each embodying one of the deer in the prologue.

The collision of unfettered nature with the unfeeling harshness of the slaughterhouse produces a palpable tension. But as the film proceeds, Enyedi incessantly explicates the subtext of the characters’ developing connection, whether through Endre and Maria discussing their own interpretations of their shared dreams or Maria using salt-and-pepper shakers or Legos to reenact their often clumsy encounters at work. This constant connecting of the dots drains all the power from On Body and Soul’s central metaphor, transforming what is at first an intriguing enigma into a bluntly symbolic mating ritual between two lonely hearts. Although Enyedi’s contrasting of brutality and tenderness is at times beautiful and engaging, it’s not enough to mask the oppressive quirkiness of the film’s trifling central love story.

Andrea Pallaoro’s Hannah is certainly nowhere near as expository. Dominated by a stunning, often silent turn by Charlotte Rampling, the film gradually doles out narrative details, and with great discretion. After packing a bag for her husband (André Wilms), who’s later revealed to be starting a lengthy prison sentence, Hannah (Rampling) is left to sort through the rubble of her life, not only because of the fresh wound left by her husband’s sudden absence, but from the guilt that slowly consumes her. As Hannah attends acting classes, which appear to be her only genuine outlet for her pent-up frustrations, she’s forced to come to terms with her own culpability in her husband’s wrongdoing. The man’s crime is never explicitly identified, though his victims are revealed to be children, and Hannah’s son’s (Simon Bisschop) decision to break off all contact with both of his parents suggests that Hannah was to some degree, whether through negligence or denial, complicit.

Pallaoro doesn’t focus so much on the social and familial fallout that comes from Hannah’s association with a deeply disturbed and predatory man so much as on her confrontation with the reality that she’s long pretended was simply not there. The film is acutely observant of the woman’s expressions and movements, from a hand clasped into a fist as she sleeps to the subtle shifting of her eyes when, while visiting him in jail, her husband attempts to elicit sympathy from her by saying that the other prisoners think he’s guilty. The film approaches Hannah’s suffering on an almost physiological level, with the use of tight close-ups on her face and off-kilter shots with only a fragment of her body in the frame heightening our perception of her vulnerability. Whether through her breathing patterns, her variety of nervous ticks, or the guttural yawps and screams she belts out in acting class, Hannah’s existential crisis plays out in her movements and gestures, with non-verbal cues conveying more than any remorseful monologue could.

Pallaoro also employs an intricately woven sound design that helps to stress the extent to which Hannah’s disorientation has left her feeling even more isolated. Off-screen sound, whether of children playing or a couple arguing on the subway, plays a critical role in the film’s portrayal of a woman so consumed with regret that the outside world feels like a distant echo. Although Hannah will inevitably draw comparisons to Andrew Haigh’s 45 Years, because of Rampling’s presence in both films and their similar portrayals of marriages destroyed by secrecy, Pallaoro’s film is more explicitly concerned with the aftermath following the dissolution of such a deeply troubled relationship. Hannah plays out in long wordless takes often stripped of context—a keenly observant, austere style that’s been justly compared to that of Chantal Akerman—and attains a discomfiting intimacy in its chilly examination of a woman coming undone.