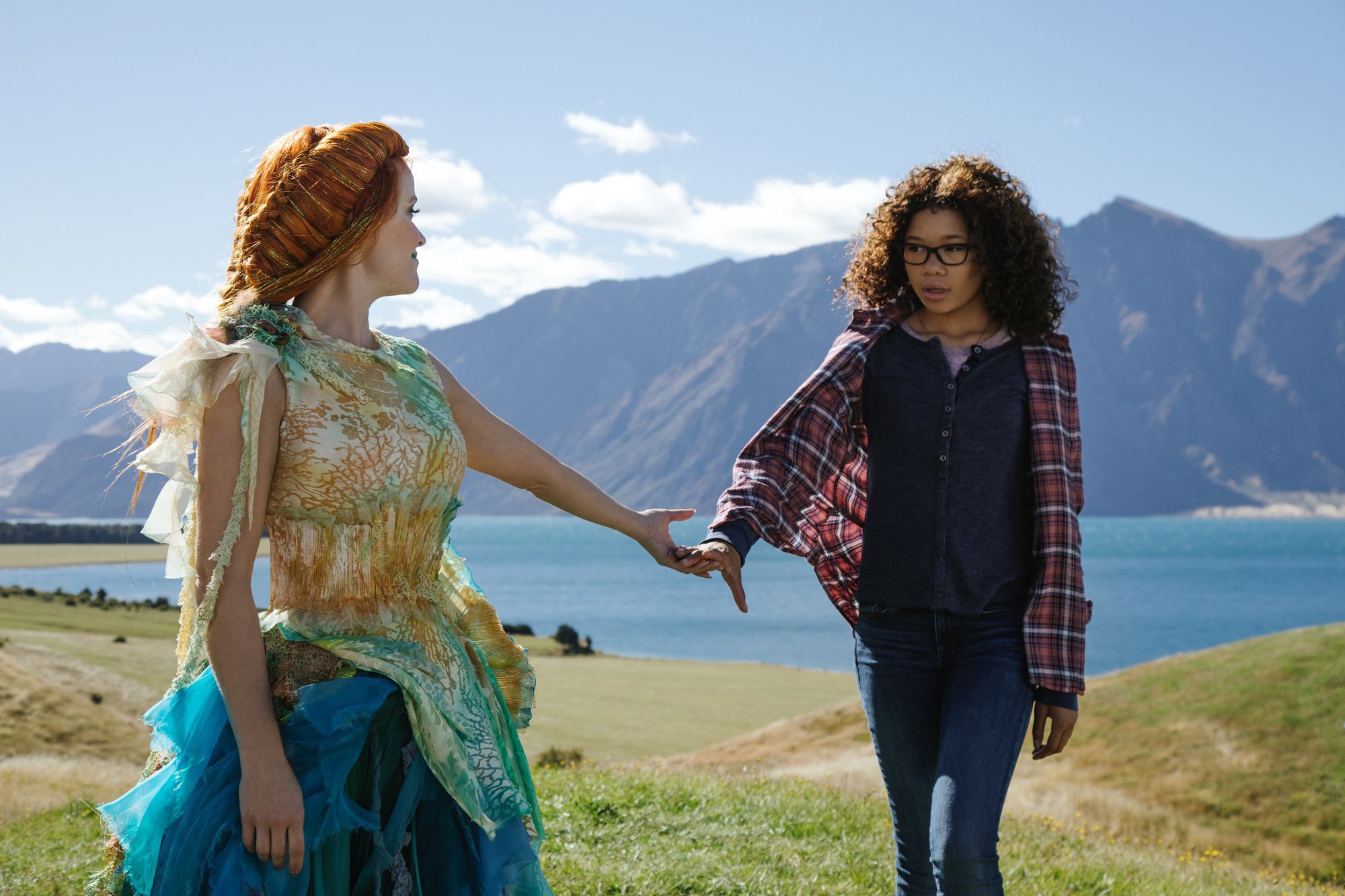 Ava DuVernay’s adaptation of Madeleine L’Engle’s 1962 sci-fi novel A Wrinkle in Time immediately establishes a wonky pace. The film sets up the strong bond between a NASA-employed theoretical physicist, Alex Murry (Chris Pine), and his inquisitive daughter, Meg (Storm Reid), before giving a cursory view of Alex’s dreams of traveling light years using only the power of the mind’s connection with the universe. Then, the story lurches ahead four years after Alex’s sudden disappearance to find Meg floundering in hostility, and the film bogs itself down in repetitive scenes of teenage alienation.

Meg is only shaken out of her inertia by the arrival of three mysterious and powerful beings—Mrs. Which (Oprah Winfrey), Mrs. Whatsit (Reese Witherspoon), and Mrs. Who (Mindy Kaling)—who bring news of Alex’s success at galactic travel and a plan to find and recruit him for a battle against an all-powerful evil entity known as It. Soon, the beings are guiding Meg, her preternaturally intelligent kid brother, Charles Wallace (Deric McCabe), and her friendly classmate, Calvin (Levi Miller), through space using a process called tessering, flinging them across galaxies and worlds in search of Alex.

Throughout her films, DuVernay’s rare visual flourishes tend to contrast sharply and often awkwardly with her generally modest, utilitarian style. That’s especially true of A Wrinkle in Time, where sweeping views of far-flung worlds feel curiously inert. On the lush, colorful planet where the kids first travel, for example, the wide vistas of verdant hills and curving, distant spires seem flattened out by the functional compositions. Other realms filled with drab grays and earth tones are meant to demonstrate It’s corrosive influence on the universe, but DuVernay doesn’t give these spaces the vital sense of scale that might have induced fear in her audience. These by and large cramped worlds never look like anything other than animated projections, unflatteringly recalling the cartoonishness of Tim Burton’s Alice in Wonderland films, but even the slapdash, garish flair of those productions suggested a distinct and determined visual sensibility.

DuVernay, however, remains a gifted and intuitive director of faces, deepening her characters by scanning the subtleties of their expressions. Some of this film’s scenes flirt strikingly with horror, namely a sequence set on It’s home planet during which the evil entity populates a fake suburban cul-de-sac with children bouncing balls in scary unison. DuVernay’s close-ups make clear the menace of these blank-faced children and their Stepford wife-like mothers, who try to lure the film’s heroes into an otherwise generic trap.

DuVernay reserves some of that sequence’s creepy-kid vibes for Charles, shrewdly attuning to the uncomfortable formality of his speech as it’s filtered through the dissonant “vocal fry” of prepubescence, even homing in on the boy genius’s slight haughtiness. And because Mrs. Whatsit and Mrs. Who are two-dimensionally whimsical figures, DuVernay focuses mainly on the wisdom that radiates off of Mrs. Which, playing on Winfrey’s iconic presence. Mrs. Which projects a combination of benevolence, empathy, and magisterial power, and Winfrey’s casting may be the most blatant use of celebrity image to typecast an alien figure since David Bowie played an aloof, disintegrating media addict in Nicolas Roeg’s The Man Who Fell to Earth.

A Wrinkle in Time is fundamentally a story of youth overcoming the self-doubt that comes with inexperience, and its strongest moments are largely played out in the myriad complexities of Reid’s performance as Meg. Where the film’s plot stumbles and jerks along, Meg is laser-focused. DuVernay captures the irrepressible curiosity and hope buried beneath the many layers of Meg’s anxiety and self-loathing from the moment the guides arrive in the girl’s yard, and close-ups regularly push in on the conflict between doubt and conviction that plays out on Meg’s face. The film may involve the instant movement among unfathomable distances and the shattered limits of space and time, but it’s only Meg who feels multidimensional, her emotional journey more mesmerizing than any of the film’s special effects.