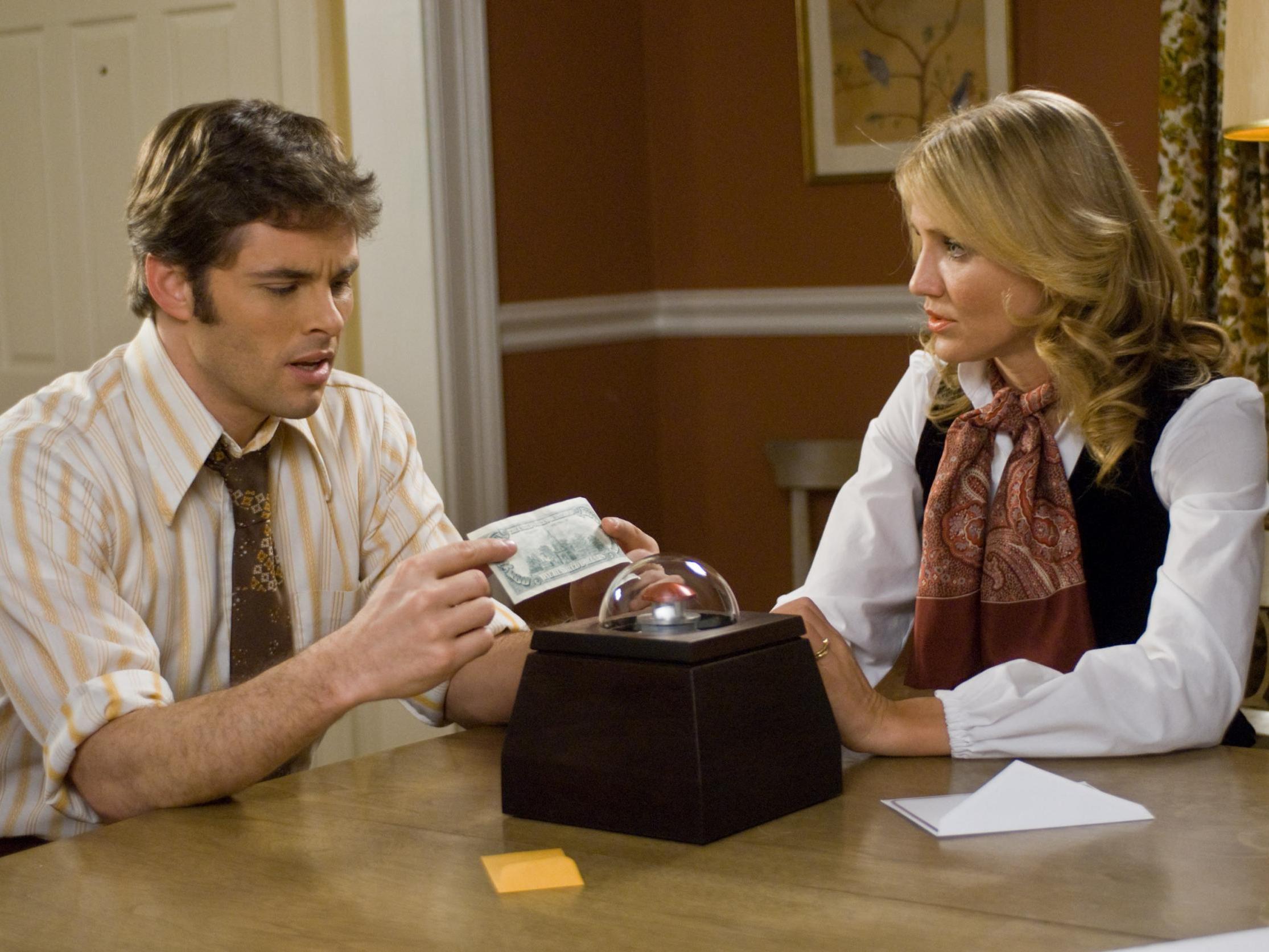 Bruce Springsteen’s song about 57 channels and nothing to watch was playing in my head last night as I rounded through my favorites on the remote control. Not that there wasn’t anything good to watch—the season premiere of Mad Men and the latest episode of True Blood, my favorite soap, were waiting in the DVR queue, and when they were done I stumbled on the second half of the always awesome Clueless. But when I searched for a movie to watch from the start, the best I came up with was The Box, a long shot that didn’t pay off.

I’ve avoided The Box since it came out last year because the blurbs on the home page of Rotten Tomatoes (which, I now think, summed it up nicely) didn’t make it sound like something I’d like. I’m not even a Richard Kelly fan, though I know there are a lot of them out there (or there used to be, anyhow): I haven’t yet seen Donnie Darko and I found Southland Tales inchoate, choppy, and ultimately forgettable. But the premise to this one had promise, in a comfortingly hokey kind of way. Norma and Arthur get a chance to transform their lives, but at what price? A mysterious stranger shows up with a box that contains a big button. Push the button, they’re told, and they’ll get a millions dollars—but someone they don’t know will die. It’s a classic Twilight Zone dilemma—in fact, the short story it was based on was made into a Twilight Zone episode in the mid-‘80s.

The faint hope of seeing a new spin on an old-fashioned moral allegory kept me interested enough for the first half hour or so, though there were warning signs from the start. Cameron Diaz’s Southern accent is patently false. Her acting, as usual, isn’t much better, and this film doesn’t make much use of the charm she usually ladles on instead. Meanwhile, director Richard Kelly and his crew keep trying to whip up drama in otherwise undramatic situations with cheap tricks like zooming in on Norma’s (Diaz) and Arthur’s (James Marsden) young son as he stands behind a railing at the top of their stairway.

Looking for meaning in those early scenes kept me going for the first half hour or so, until one lead after another wound up in a blind alley. What was all the fuss about Norma’s bad leg or Arthur’s psychological state? How is the strange stuff that happens related, if at all, to Arthur’s job at NASA? And why all that drama with the camera when we first see the kid, who all but disappears from the story after that until he pops up in the climax as a melodramatic plot device?

I didn’t even get that moral exploration I was hoping for, since the issues the box might have opened up are left unexamined. Norma and Arthur, who we are apparently meant to empathize with and admire, keep talking about how they need to talk about whether to hit the button, but they make their decision impulsively and for the weakest of reasons, apparently sacrificing someone’s life for the joys of unlimited shopping. A better film might have turned that blithe decision into an indictment of how thoughtlessly we blinkered first-world types can sacrifice the lives of strangers for our creature comforts. For all I know, that may even be what Kelly was getting at, but rather than lead me to that conclusion, he left me to spin my own theories as I retreated further and further from the flat characters, pretentious references and increasingly muddy narrative. During a clunky Q&A toward the end, as one of the mysterious stranger’s minions tries to figure out what he’s doing and why, the minion tells the stranger: “Your employers remain a mystery to us all.” Exactly.

Even The Box was better than the movie I watch most of afterward, an old Eddie Murphy vehicle called Boomerang. How bad was it? Well, Halle Berry plays the second-banana girl next door while Robin Givens prances around as the object of every man’s desire. Eddie Murphy is supposed to be a sexist pig getting his comeuppance, but the star-flattering script makes him pretty sympathetic from the start. Grace Jones gets the same star treatment for playing the self-parody of a diva she always played, only with a French accent, while the smoldering Eartha Kitt plays a woman who’s humiliated for having the nerve to want a sex life at her age. Best of all, Murphy’s character scoffs loudly and long, outdoing all of his equally grossed-out boys, when one of his friends tells a story about having been fooled by a chick with a dick. (In case you’re wondering, Boomerang came out five years before Murphy was arrested for soliciting sex from a cross-dressing prostitute, thus clearing up any doubt as to why he’d protested so much all those years.)

That’s the thing about TV: It’s always there, even when you’re too tired to work at being entertained. Movies that bad have a pretty strong gravitational pull, and sometimes all I want to do is surrender to it.