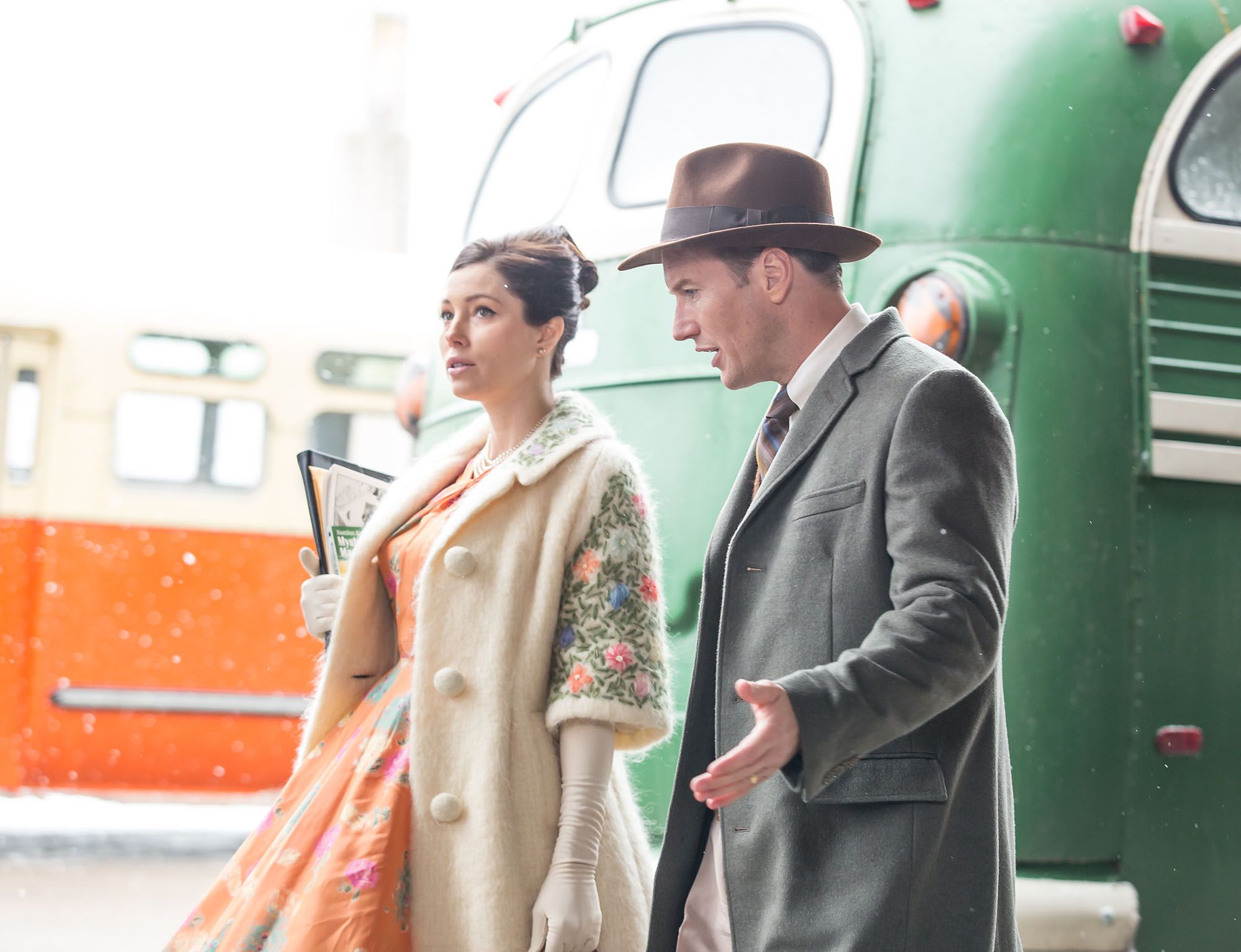 Adapted by screenwriter Susan Boyd from Patricia Highsmith’s 1954 novel The Blunderer, Andy Goddard’s A Kind of Murder aspires to be a feminist detective thriller. But the film, set in 1960s New York, seems far more interested in its art design then in fully developing the story’s underlying sexual ethics. Even the casting suggests that its producers hope to benefit from the nostalgia generated for that time and place by Mad Men: One of that show’s principal actors, Vincent Kartheiser, plays the film’s sleuth, Detective Lawrence Corby, who tries to unravel the mystery surrounding two women found dead at the same suburban bus station several weeks apart.

The film opens with the first murder, that of the wife of an unprepossessing bookstore owner, Mr. Kimmel (Eddie Marsan), whom Corby suspects of committing the crime. The murder also captures the attention of Walter Stackhouse (Patrick Wilson), a successful architect and amateur writer of detective mysteries. Stackhouse does some investigation of Kimmel on his own, and in the process implicates himself in the second murder. Stackhouse works in the city and lives in the suburbs with his paranoid and depressive wife, Clara (Jessica Biel). Sexually frustrated as a result of her various neuroses, Stackhouse meets a seductive young jazz singer, Ellie (Haley Bennett), thus setting into motion the film’s noirish romantic subplot.

The central murder mystery is handled without much aplomb or ingenuity. Corby is a clumsy dick, and his investigation plays out like a humorless parody of a detective film. Albeit exquisitely packaged, A Kind of Murder is mostly a paint-by-numbers genre piece that only flares into life when exploring issues of sin, guilt, and punishment in relation to masculine sexual urges. As in many film noirs, murder here is explicitly linked to thwarted lust. The film takes the standard Christian condemnation of adultery that leads fornicators to the jailhouse or the grave in most noirs and endows it with a feminist twist. The biblical exhortation against lusting after another woman becomes here a critique of male sexual license in America on the eve of the sexual revolution.

This appropriation of Christian morality for feminist ends is illustrated by Stackhouse’s relationship with Ellie. She’s the Eve to his Adam, tempting him away from his well-lighted, idyllic suburban home to a dimly lit underground jazz club in Greenwich Village. But the film emphasizes her neutrality in this process, pointing out that it’s Stackhouse’s prerogative that sets the affair in motion. While Ellie is a willing participant in the drama, she’s far from the sexually assertive she-devil that Clara makes her out to be. This emphasis on Stackhouse’s culpability and refusal to judge Ellie captures America’s evolving morality during that period, when Eisenhower-era family values were giving way to a greater emphasis on sexual liberation and gender equality.

From the jazz club where Ellie performs to the basement where the final showdown between the three principal male characters occurs, the film’s muted cinematography coincides with the ethical murkiness of Stackhouse’s behavior as he journeys from the paradise of sacred matrimony to the hell of infidelity. His symbolic castration by Clara causes him to stray in his heart before he does so with his body, and the film’s dénouement reveals this to be a tale of feminist revenge from beyond the grave masquerading as a Christian parable about the dangers of carnal desire outside of marriage. As Stackhouse sits in his firm’s office beneath an abstract expressionist painting, perplexedly trying to rationalize his immoral behavior to his business partner, the art’s wild, swirling colors hint at the moral revolution soon to be unleashed upon the nation and the confusion it would sow in its wake.