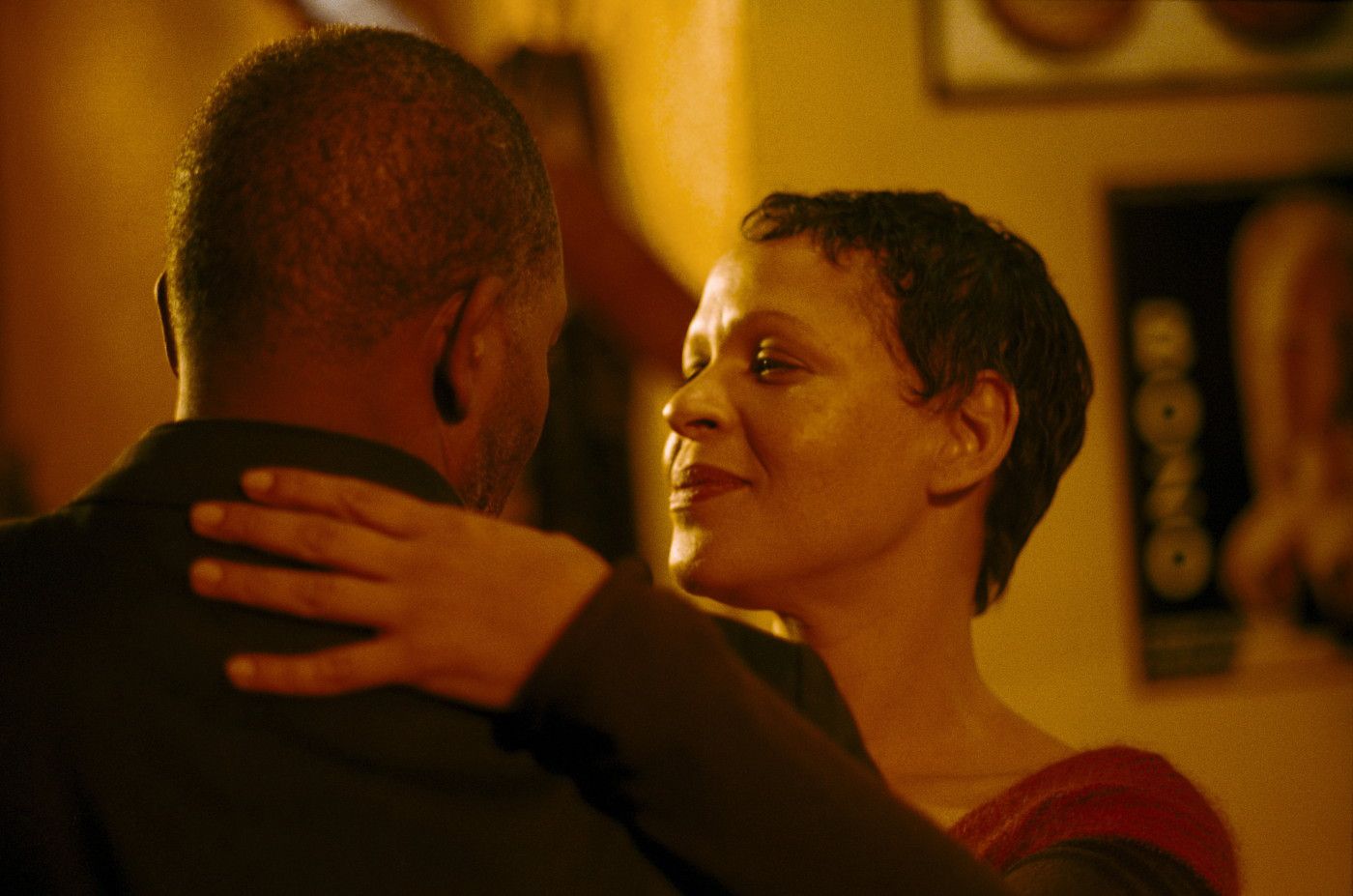 Approximately an hour into 35 Shots of Rum, Claire Denis’s ninth narrative feature in one of the more vibrant filmmaking careers in contemporary Europe, comes a scene that startles with the immediacy of its emotional pulse. The quartet of principal characters, an extended family of pan-racial tenants in a suburban Paris apartment building, plead their way into a café after closing time; their trip to a concert has been thwarted by a broken-down car, and as a driving rain lets up they’re desperate to salvage their evening together. Middle-aged, widowed train driver Lionel (Alex Descas, whose striking, gray-bearded face carries the eminence of an Easter Island statue’s) and his student daughter Joséphine (Mati Diop) have been somewhat tensely preparing themselves for her likely-not-distant departure from home; cabbie Gabrielle (Nicole Dogué) shares an intimate history with Lionel and is discombobulated after her vehicle has sabotaged the outing; brooding, scruffy neighbor Noé (Grégoire Colin, a Denis regular like Descas) pines for Jo but hesitates to act. As a hostess brings them food and towels off the women, the companions’ simmering feelings edge to the surface. Jo and Noé sway amorously to a Commodores song on the jukebox; Lionel, under Gaby’s gaze of concern, responds by pulling the young server close to dance with him. It’s a sequence that could be bloodlessly described as “textbook” for its exposure of character through action, but it’s an organic, impeccably staged high point in what might be Denis’s finest work of the decade.

Intended by the director as an homage to Yasujirô Ozu, particularly his father-daughter drama Late Spring, 35 Shots of Rum never apes the Japanese master’s style, even if Lionel’s profession makes for convenient use of the common visual trope of passing trains. (Denis’s indispensible cinematographer Agnès Godard renders the train yard environs and POV footage from the metro driver’s window mesmerizing and mysterious.) Rather, Denis and co-writer Jean-Pol Fargeau examine its four subjects, all in varying degrees of personal stasis, with their own brand of fluidity, empathetically legitimizing anxiety about the advent of change without endorsing the paralysis it can induce. Jo exhales a quiet laugh when her dad rings the bell before opening the door at night, as he does when she texts him; but their friction is stoked when he finds her pressing his shirts, so she conceals from him her purchase of a new rice cooker on the same day he’s brought one home. (Her functional redundancy, made manifest through kitchenware, is instinctively suppressed.) Gaby proclaims her love for driving a taxi to passengers—compared to Lionel’s stoic shepherding of his metro—then watches in solitude from her balcony for her onetime lover’s approach every night, chain-smoking as he does. Noé, living in his late parents’ penthouse rooms with their furniture—“I must have my reasons,” he sheepishly grins—vows to move overseas for a job, but he passionately eyeballs Jo’s closed door, and his brusque disposal of a pet suggests bravado meant to push the possibility of love away.

Perhaps as a result of channeling Ozu, Denis’s incipient humanism comes through more directly than in her existentially forbidding The Intruder or even her acclaimed, baroque Herman Melville remix Beau Travail. Her wide scope on life means there is social context to the interpersonal dynamics, both through other lives glimpsed and everyday postcolonial politics. Lionel’s metro colleague, eased into retirement, unsettlingly proclaims his alienation: “I don’t have this life in me.” On a visit to the sister of Jo’s late German mother, she and Lionel hear the frau lament a world where we’re “all in our little corners, every man for himself,” and Denis makes particular study of her characters when alone—studying, smoking, flopping onto a chair, and farting. These solo interludes suggest contemplation and bracing-up for reconfiguring relationships, reinventing one’s world; a corollary to the view of Jo’s anthropology classmate who cites Frantz Fanon on the need of the subjugated to revolt when they “can no longer breathe.” The bond between Jo and Lionel, so beautifully captured by her clutching his chest from behind on his motorcycle, is given an equally economical, spoken reassurance by the quiet patriarch to his child: “Don’t feel I need to be looked after…Just feel free.”