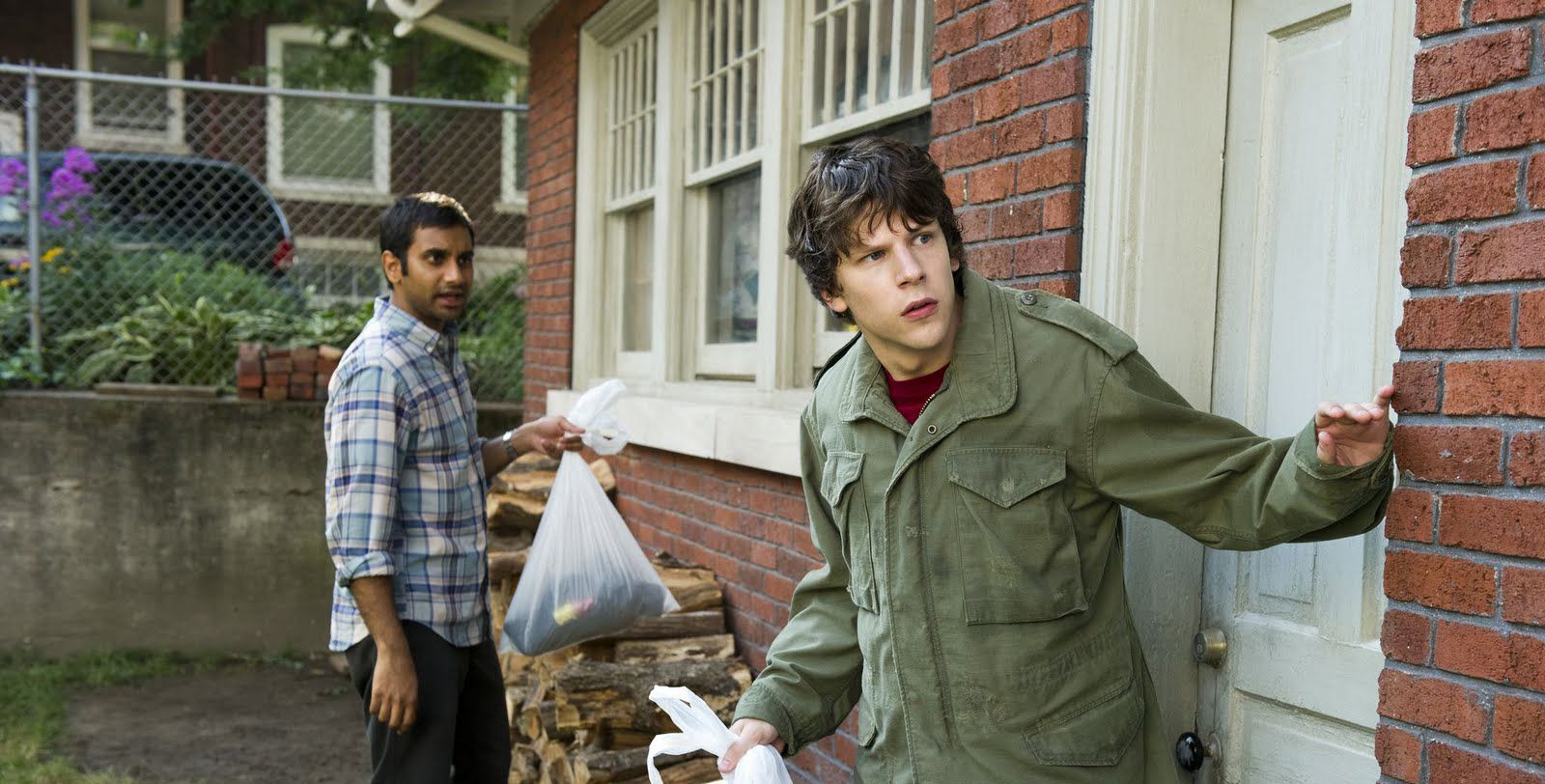 Watching 30 Minutes or Less, a proudly stupid action comedy that’s awfully lethargic for all its slam-bang propulsion, it’s tough to pinpoint who exactly Ruben Fleischer thinks he is. Just as he did with his overrated freshman feature, Zombieland, the director, who thinks in music-video shorthand, presides over a frenzy of wannabe-madcap nihilism; however, a Coen brother he is not. Holding tight on a pair of jabbering crooks in a dirty vehicle, he might fancy himself our 947th Tarantino disciple, but, then, the conversations he presents, penned by first-timer Michael Diliberti, aren’t all that compelling—unless you’re riveted by the novel notion of a tanning salon/whorehouse. The bass-thumping, stick-it-to-the-man soundtrack suggests he hails from the Todd Phillips School of Headbangery, but his zealous conducting of a chorus of pop-culture nods, whose unwieldiness hovers just a few notches north of those in a Shrek installment, insists that he is, indeed, just another godforsaken Apatow also-ran.

That Fleischer lacks a discernible directorial identity is one reason 30 Minutes or Less will likely skip right out of your memory within the titular timeframe. You know American comedy is in the toilet when even this, the One Where Jesse Eisenberg Plays a Pizza Boy Forced to Rob a Bank with a Bomb Strapped to his Chest, winds up in the same towering heap as every other wit-challenged man-child throwaway, its blithe racism, homophobia, and misogyny even more offensive for their dumbly presumed, misguided tongue-in-cheekness. Many of the laughs are the sort that make you hate yourself (like the giggle-gasps induced by a character slapping a Pakistani beauty with a “Slumdog” slur), and the dual tales of inept thieves are blandly obvious when they should be gleefully, farcically unhinged. A nondescript slacker with the usual developmental deficiencies, Nick (Eisenberg) is finally thrust into action when an older slacker, Dwayne (Danny McBride), and his dodo-bird-ish, sexually ambiguous sidekick, Travis (Nick Swardson), drug him on a delivery run and rig him up with a vest of C4, demanding that he come up with $100,000 in 10 hours, or else it’s kablooey. It’s all part of Dwayne’s hooker-inspired plan to hire a thug (Michael Peña) to kill his father (Fred Ward), a rightfully oppressive ex-Marine who offers a mean inheritance thanks to a multi-million-dollar lottery win.

Named for the delivery promise of the pizza joint Nick works for, 30 Minutes or Less is about seven slices short of the gonzo follow-through it needs to back up its batshit synopsis. An itch of conformity pervades the entire thing, and its only true distinction is that it may just boast more curse words per minute than any other film this year. But this isn’t fun profanity. Every actor is given a healthy mouthful of expletives to spew (even the bit players in a low-rent-Lumet bank heist, who coldly zing each other with f-bombs amid the confusion), but the winning tally surely goes to McBride, who was something of a comic revelation in Pineapple Express, but has since grown content with playing glorified, vocally nimble versions of your everyday asshole. To hear him whiz through pages of unmentionables is to feel punched and depressed, and that Fleischer lets it go on so relentlessly is one of his greater failings. Another is an uncertainty of what to do with Aziz Ansari, the gifted comedian from Parks & Recreation, who plays Chet, Nick’s slightly more responsible, if still bumbling, best friend. Though he only needs one scene to make a better bad teacher than Cameron Diaz (Chet’s a rude, recently promoted elementary sub), Ansari has a tendency to play each scene like he’s still on the stand-up stage, with every punchline preceded by a deliberate rhythm. As an actor, he needs wrangling that Fleischer isn’t ready to provide.

It’s good, then, that Eisenberg is playing the dude with whom we must identify. Coasting through this bill-paying project with the effortless instincts of a cool pro, he’s the best thing the movie’s spoiled-millenials-in-over-their-heads angle has going for it, his twitchy paranoia and baby-smooth complexion as awkwardly winsome as ever. He’s surely the greatest comedic asset, prompting more nyuks with a moment of wuss panic or eked-out aggression than all of McBride’s curse vomit. But one actor’s game performance is hardly a sufficient movie resuscitator, and Eisenberg can’t do squat for the story’s thin glaze of cop-out sentiment, which involves a romance with Chet’s twin sister, Katie (Dilshad Vadsaria), and a friendship-shaping backstory about Nick’s promiscuous mom that’s basically left dangling. If 30 Minutes or Less had the grit to buck up and settle on what it wants to be (an example for which might well be set by its director), it might not seem as uninspired and clutter-brained as the slouches who populate it. As is, though, it’s 83 minutes of noncommittal tripe that’s just about dead on delivery.