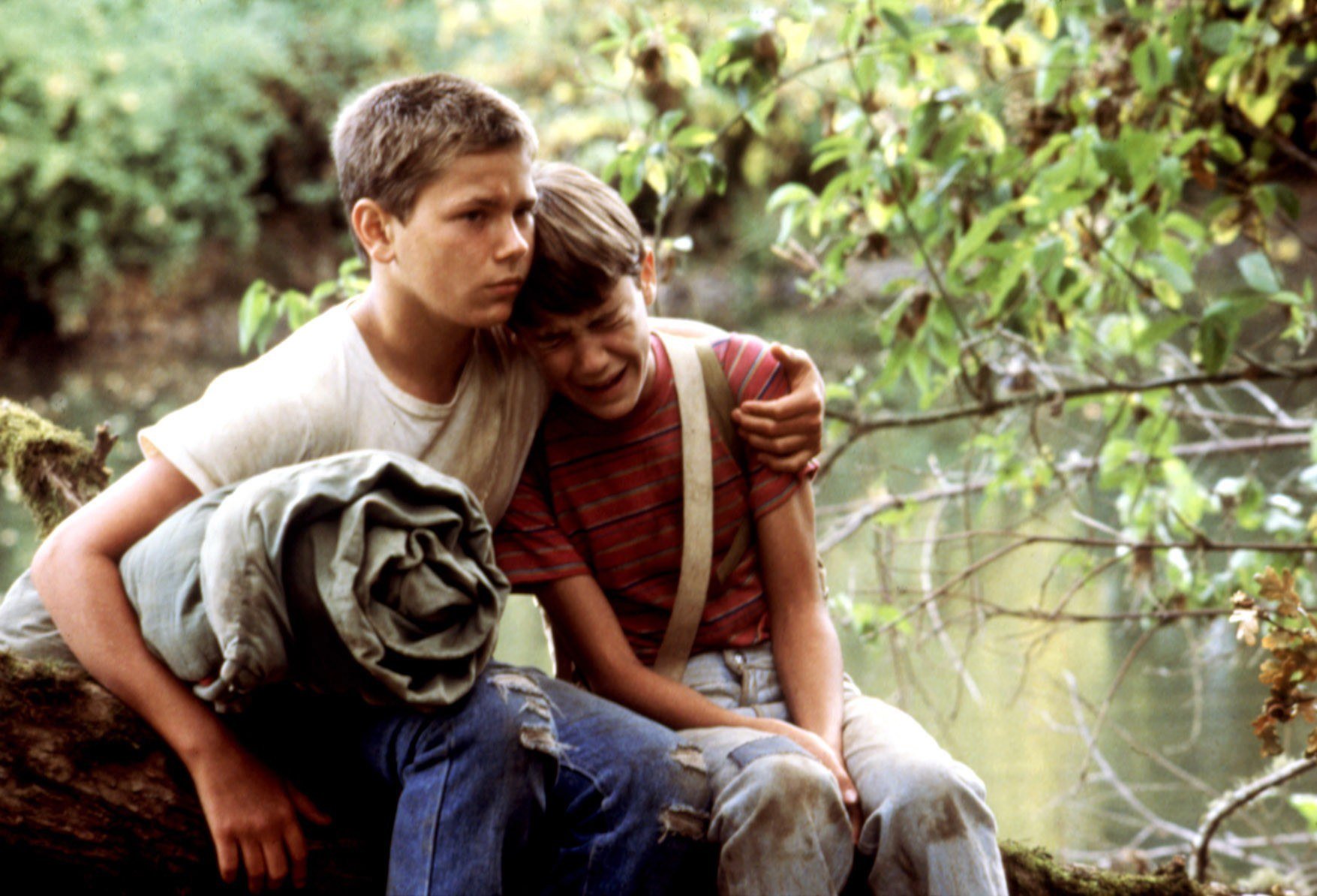 During the summer of 1986, my friends and I all thought Stand By Me was the greatest movie ever made, and we were sure it had been made for us, because though the characters in the film were a year or two older than we were, and though the story was set during our parents’ teenage years, we could all see ourselves in one of the four main characters. No film had ever seemed more real to me, more true, more beautiful. I was ten years old.

I know I saw Stand By Me in the theater, but I don’t remember with whom. Probably a couple of friends and at least one of our parents, because it was rated R and we were years away from being able to go to R movies on our own. How did we ever convince a parent to take us to a movie in which kids swear, smoke, and talk about sex? I have no recollection, but I expect it had something to do with the music.

The summer of ’86 for me was the summer of Stand By Me’s songs. Before seeing the movie, I scrounged up some money, or wore my parents down with whining, and got the soundtrack on LP. I remember my father’s delight with the album. He took a big cardboard box of 45 rpm records out of the closet and showed me the original singles of some of the songs on the album, singles he had bought at a record store when he was the age of Gordie and Chris and Teddy and Vern. I think I wanted the soundtrack because I had seen the music video on MTV, and I had certainly seen the trailer, which was ubiquitous on every channel. The title song was inescapable that summer, and though the brief scene with Corey Feldman and Jerry O’Connell lipsynching “Lollipop” is not in the trailer, I’m sure it was used in promotional materials. That song and Buddy Holly’s “Everyday,” also used prominently in the film, were two my father was especially nostalgic for.

Stand By Me is for me, then, the world’s largest ball of nostalgia—based on Stephen King’s story “The Body,” in which King deliberately set out to capture some of the events and feelings of his childhood; directed by Rob Reiner, who adjusted the screenplay (by Raynold Gideon and Bruce A. Evans) to focus on the character of Gordie (Wil Wheaton), with whom he most identified; told in both the original novella and the film as a frame story of an adult remembering his childhood; embraced by my and my friends’ parents, whose childhoods coincided with those of the characters; adored by us and made into a emblem of our own childhoods, so that now, twenty-five years later, it evokes similar emotions in me to those I expect it evoked in my parents in 1986.

My own nostalgia is intimately connected to something that happened after 1986, however: the death of River Phoenix.

For many people of my generation, especially filmgoing middle-class white kids, Phoenix’s death was, I expect, much like the death of James Dean for our parents. We’d had more time with Phoenix, though, than they had with Dean, and we watched him grow up with us. I’d never seen eyes like his, screaming sensitivity, yet also full of humor and anger and, it seemed, every emotion ever felt by anyone anywhere—but not melodramatic, not forced, just what, at ten, I would have considered beautifully, achingly real. I didn’t see too many of his other movies, but it didn’t matter, because his portrayal of Chris in Stand By Me seared my soul. And then came My Own Private Idaho, which I probably learned about from watching Siskel & Ebert, and which I would have had to somehow sneak a viewing of, for fear my parents might wonder why I was interested in a movie in which two boys kiss. I saw it shortly before Phoenix died in the fall of 1993, and my angsty teenage heart responded to him portraying Mike Waters in the same way my earnest pre-teen heart had responded to him as Chris Chambers in Stand By Me. The feelings were inchoate, but blunt: I wanted to know him, to look into his eyes, to hold his hand. He made camping seem vastly more interesting than I’d ever known it to be.

And then on October 31, 1993, a couple weeks past my eighteenth birthday and a few months into my senior year of high school, River Phoenix died of a drug overdose at The Viper Room. I’ve never been beyond the airport in Los Angeles, but the facade of The Viper Room stands vivid in my memory and imagination, because I remember watching the news report of Phoenix’s death, and the exterior shots of the club were interspersed with stills and scenes from his films, of which Stand By Me and My Own Private Idaho were particularly prominent.

The ending of Stand By Me gained extratextual resonance on that day. The film is an elegy for Chris, and so it became an elegy for the youthfulness and beauty of Phoenix himself. As the adult Gordie (with Richard Dreyfusss’s voice) narrates the story of the adult Chris’s death, the child Gordie watches the child Chris walk off into the woods and then literally disappear, a ghostly memory gone.

Until deciding to write about it, I had not watched Stand By Me since 1993. It was one of those relics I thought probably best left to childhood. It would, I was sure, seem sentimental and simplistic to me, and even if it didn’t, there was no way I could possibly feel as passionately about it as I did in the 1980s, when I not only saw it in the theater and bought the soundtrack, but then bought Different Seasons, the Stephen King collection that includes “The Body” so I could read and reread the story while waiting for the film to be released on videotape. (In the 1980s, there was a large gap between when a film was in theaters and when it was available on home video, months that felt like centuries.)

Thankfully, Stand By Me was not nearly as bad as I thought it might be.

There is, yes, a certain waxiness to it all now, a willfulness that lacks the spontaneity and lightness of a truly great film about children such as The 400 Blows (which is to Stand By Me as The Return of the Seacaucus Seven is to The Big Chill), but the performances remain endearing and the world of soft shadows and gauzy light conjured in cinematographer Thomas Del Ruth’s lens could enchant even the most jaundiced eyes. The script is schematic and predictable, but charmingly so, with guileless dialogue that is obviously aware of itself, especially in the mouths of boys for whom four-letter words possess the totemic power of taboo. The narrative has a simple quest structure from which can hang a moment of epiphanic truth and insight for each of the four boys. At the conclusion, Gordie gets a chance to stand up for Chris and himself against the bullies of the world, and so achieve a vision of Manhood at the end of a long tunnel of gawkiness. Their quest complete, the boys go off to their homes as if they are walking into the deepening shade of eternity, as if morning is a myth—and it is, because this is a memory movie, and more than that it is a textualized memory: as Chris fades away, we cut to a green-lettered computer screen, with the narrator’s words written out for us to see. Reality is mediated not only by the movie, but by memory metamorphosed into sentences and paragraphs. This is hokum at its most honest.

When I was ten, Stand By Me felt like the apex of realism because I’d never encountered a character who seemed so much like me as Gordie did. Twenty-five years later, it feels real for opposite reasons: for its naked artificiality. It gets right the way we shore up our fading memories by turning them into stories, by setting a soundtrack to them, by finding just the right words for every conversation and just the right lessons for every walk down the railroad tracks.

The last words of Stand By Me appear in silence on the computer screen: “I never had any friends later on like the ones I had when I was twelve. Jesus, does anyone?”

The moment is presented with extraordinary restraint: the words alone, no music, no sound at all. The truth is in the text. Richard Dreyfusss then turns off the computer and walks out the door of his study, off to take kids swimming. He closes the door, his past secured from chaos, his present rich with infinite realities, and the title song plays for the first time with lyrics, as the generations merge in a long shot through a window. It’s the window we stand at when we write and when we remember, and as viewers we’re placed on its dark side, the people in a movie theater looking at the projected light. Enthralled. Timeless. Reluctant to leave the realm of memory for the mess of all that’s on the other side of the exit door where the land is dark and the moon is the only light we’ll see.