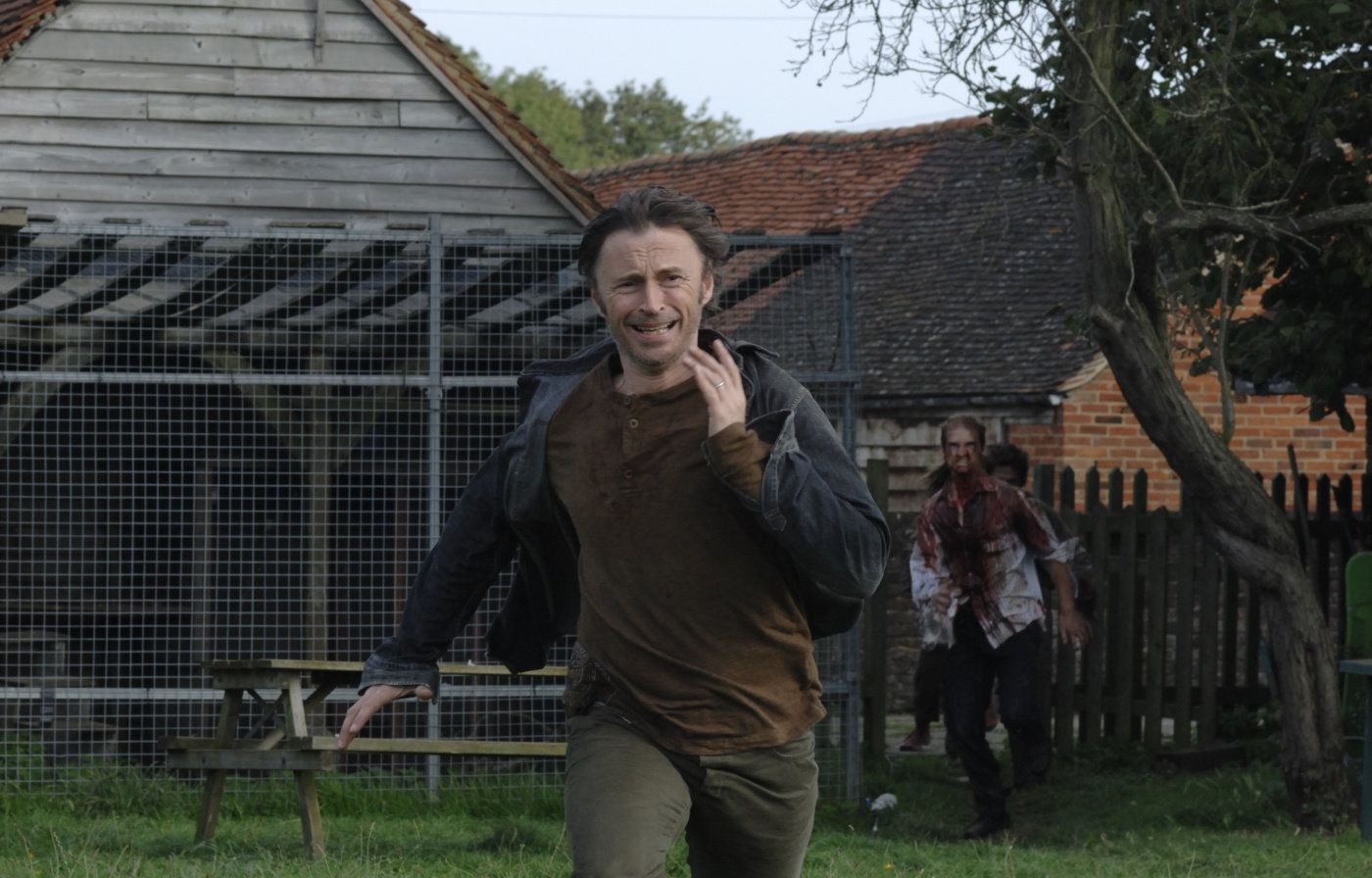 Basically, we’re all fucked and there’s no hope. 28 Weeks Later rolls in like a poisonous dust cloud of nihilism. The everyman hero this time around is Don (Robert Carlyle), who thinks he and his wife (Catherine McCormack) are safe in their wee rural cottage when the rage virus transforms most of mainland Britain into shrieking, blood-vomiting zombies that sprint head-on at their victims. The opening sequence shows how wrong Don is, and in a moment of panic he leaves his loved ones behind and races toward his own self-preservation. Perfectly cast in the role, Carlyle looks wizened and exhausted, hair graying at the temples and mouth grimacing in fear, as he races across a green field chased by a legion of monsters. The camera swoops above him across the field, and we’re plunged into the realm of nightmare. Step after step, pushing himself past the point of weariness, Carlyle takes one last look behind him as his wife is ripped away from the window by the infected. Already, this prologue sets a tone of unrelenting apocalyptic doom.

That doesn’t improve any when the American military shows up—28 weeks later. They smugly declare that the war against the infection has been won, and everything is under control. Don is reunited with his children, who were vacationing in Spain during the outbreak, and struggles to answer difficult questions about “what happened to Mum.” Things seem fine for a while, and the Yankee infantry is so bored by the country’s reconstruction that they pass the time gazing through the scopes of their sniper rifles past the windows of survivors. And, sure enough, it isn’t long before a new outbreak runs rampant throughout the swarms of refugees who survived the previous outbreak. To add to the demoralizing unfairness of it all, they’re also getting shot at and blowtorched by the Americans, who quickly reach “code red” status and start firebombing entire city blocks and setting off other biological weapons to prevent further infection.

28 Days Later was a tough and uncompromising horror film, but it’s all sunshine and laughter in comparison to the sequel. The thesis of this film is that the War on Terror is ultimately a self-destructive one for all concerned, from the bullying authority figures to the demoralized combat soldiers to the fractured family units. Director Juan Carlos Fresnadillo seems to place his empathy with the recently infected. Much like Philip Kaufman’s remake of Invasion of the Body Snatchers, there’s an understanding for what it means to be human—and the magic that is lost when that humanity is stripped away. As if giving the middle finger to Steven Spielberg’s cop-out ending to The War of the Worlds, this one sets up sympathetic characters (where even Don’s guilt-inducing cowardice is represented as chillingly understandable under the circumstances) only to absolutely decimate them whenever it feels like it, unfairly and often in horrible and unfair ways. (Most might single out Don as the “Janet Leigh” character of 28 Weeks Later, but don’t start guessing, because this one is a highly unpredictable version of the game “characters that don’t die in the order you expect.”)

The brooding, hard-driving score by John Murphy, with some memorable tracks repeated from 28 Days Later, grinds itself into your brain, inducing maximum paranoia as the survivors make their fight-or-flight out of the city. And the image quality is still rough around the edges, with roving handheld shots stalking the characters (or, more often, racing along with them). But Fresnadillo attempts to move beyond the scrappy digital video original, adopting an epic scope, with empty cities forming into haunted canyons. That opening shot of Carlyle running across the field is representative of how much larger the scope is on 28 Weeks Later. A bigger budget equals bigger explosions and more infected zombies roaming about, but what I like so much about Carlyle’s run is how it emphasizes his smallness in the face of looming disaster. Brace yourself, kids, because the movie never wavers from that theme. Running at a taut 99 minutes that seem to go by in the blink of an eye, the only question is whether 28 Weeks Later will pull its climactic punch to reaffirm the previous film’s optimistic statement that “not everything’s fucked.”