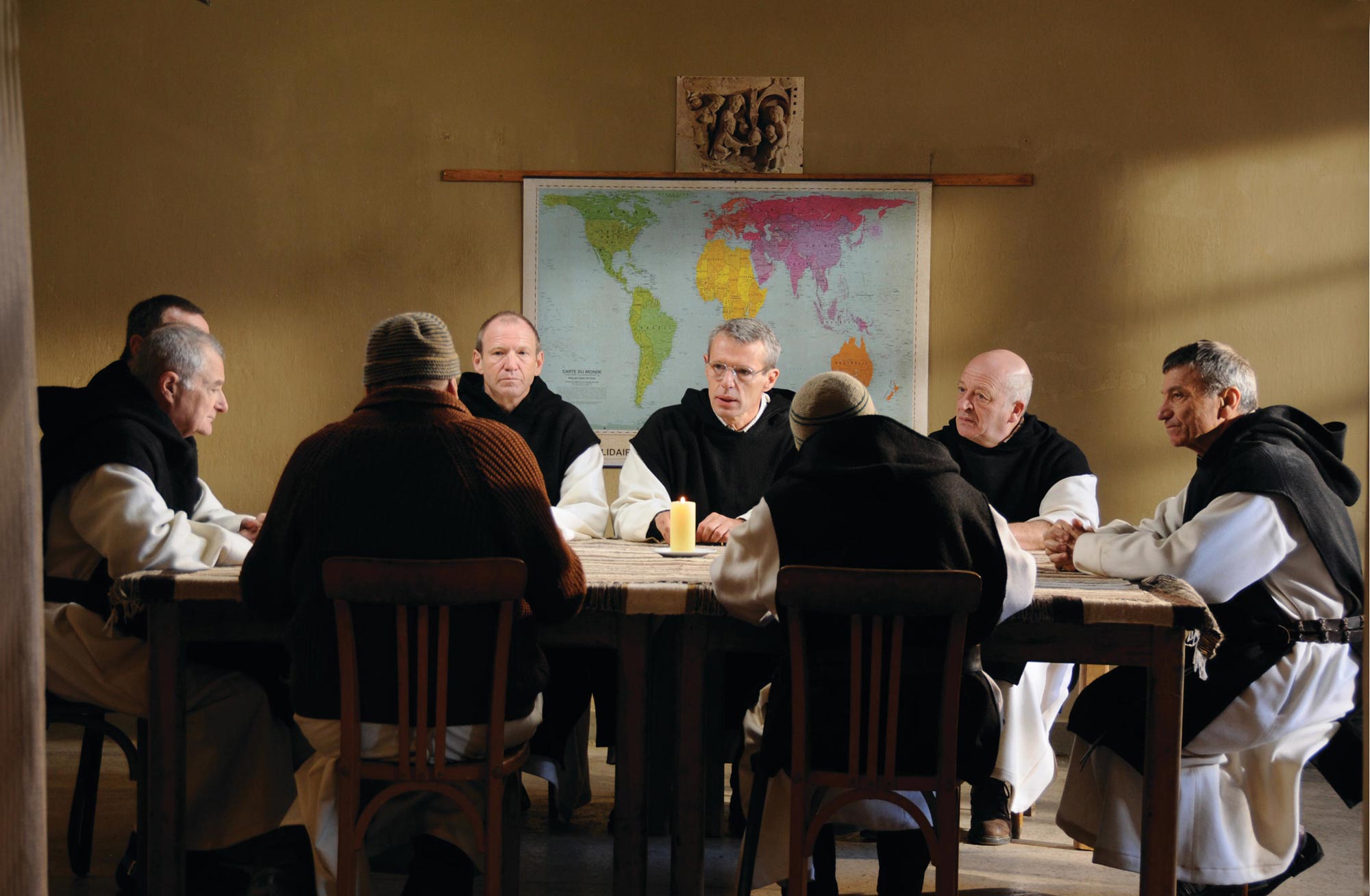 The true story of seven French monks in Northern Africa who in 1996 were kidnapped and murdered by Islamic extremists, Xavier Beauvois’s in-competition Of Gods and Men is, no more and no less, a handsomely mounted French prestige picture. Never less than perfectly competent, it’s still somber and respectful to a fault: the Cannes equivalent of Oscar bait.

Beauvois models his film’s rhythm on the monastic life, and a few moments in the monastery toward the beginning of the film have a similar meditative rhythm as Philip Gröning’s marvelous Into Great Silence. But that comparison soon falls apart, as Beauvois is less interested in humanizing the monks (played by an experienced cast of French actors that includes Lambert Wilson and Michael Lonsdale) than in sanctifying them.

Their sacrifice—despite orders from the military to return to France, the monks stay in Africa, knowing full well they will probably not survive—may indeed have been a noble one, in keeping with their commitments to their community and their faith, but it can’t have been an easy one to make. But with the exception of a few scenes of the monks discussing the decision, we never actually see them struggle with the choice. Beauvois treats them as nobly suffering martyrs rather than as human beings, a fundamentally anti-dramatic choice that renders their decision a foregone conclusion and prevents Of Gods and Men from carrying anything close to the spiritual weight Beauvois intends.

I’m not sure how to explain my rather nonplussed reaction to Russian documentarian Sergei Loznitsa’s feature debut, My Joy, without getting into spoiler territory, so suffice it to say that what begins as a mysterious and fairly gripping character study similar in style to the films of the Dardenne brothers or 4 Months, 3 Weeks, and 2 Days—its D.P. is Oleg Mutu, who also shot the Cristian Mungiu film—takes a bizarre turn at around the one-hour mark and doesn’t look back. Focus shifts from the personal to the allegorical, with one central narrative branching off into a series of strange vignettes and other seemingly unrelated narratives. I think Loznitsa intends these threads as a commentary on the corrosive effect Russia’s politics have had on its citizens, and I respect the project intellectually even as I can’t quite forget how off-putting the actual viewing experience was. But I’m sure that’s by design, and there’s no question that it has stuck with me in a way few of the festival’s other titles have. Besides Certified Copy, My Love is the only film in competition I can honestly say I think would reward another viewing. With so many bland mediocrities around, that’s something to be admired.

Derek Cianfrance’s Blue Valentine screened Un Certain Regard last night just months after debuting at Sundance, where it was one of the festival’s breakout critical successes. And, as has been the case with so many Sundance hits before it, I have to say I’m not really feeling the love. There’s plenty to like about Blue Valentine, a dissolving-marriage drama starring Ryan Gosling and Michelle Williams, but nearly everything that’s good in the film is counterbalanced by its flaws—the obvious, cheap, precious aspects that position it, mostly for the worst, as a prototypical Sundance movie.

Blue Valentine features a trendily fractured narrative that cuts back and forth between the start of Dean (Gosling) and Cindy’s (Williams) relationship and its end. Often this structure is used in exactly the way you would expect. It cheaply contrasts the happy moments in their relationships with the sad, as if it’s news that relationships usually start off well before going sour. Sometimes, however, it works in more subtle ways, suggesting a case not of paradise lost, but of Cindy simply choosing the wrong guy from the start; as the film continues, it becomes clear that the flaws that make Dean such a miserable husband were always present and just became more pronounced over time. It’s in this dynamic—as well as in several especially raw scenes—that it’s possible to see the genuinely insightful, powerful film Blue Valentine could have been.

Sadly, Cianfrance—who also co-wrote the screenplay—can’t resist indulging many of his hackier impulses. Among the most obnoxious of these is the score, made up by instrumental versions of songs by Grizzly Bear, a good band whose music in this particular context comes off almost insufferably twee. Especially when Cianfrance can’t let a single emotional beat go by without highlighting it with a musical cue. Similarly, every bit of diegetic music is almost comically on the nose (“You Always Hurt the Ones You Love?” Seriously?), as is much of the dialogue. Entire scenes exist for no purpose other than to enunciate theme, and for every sequence of bruising emotion there’s one consisting exclusively of exhausting marital-squabble clichés. Gosling and Williams—two of the finest actors working today—are both terrific, but they’re undermined by the script just as often as supported.

The Cannes Film Festival runs from May 12—23.