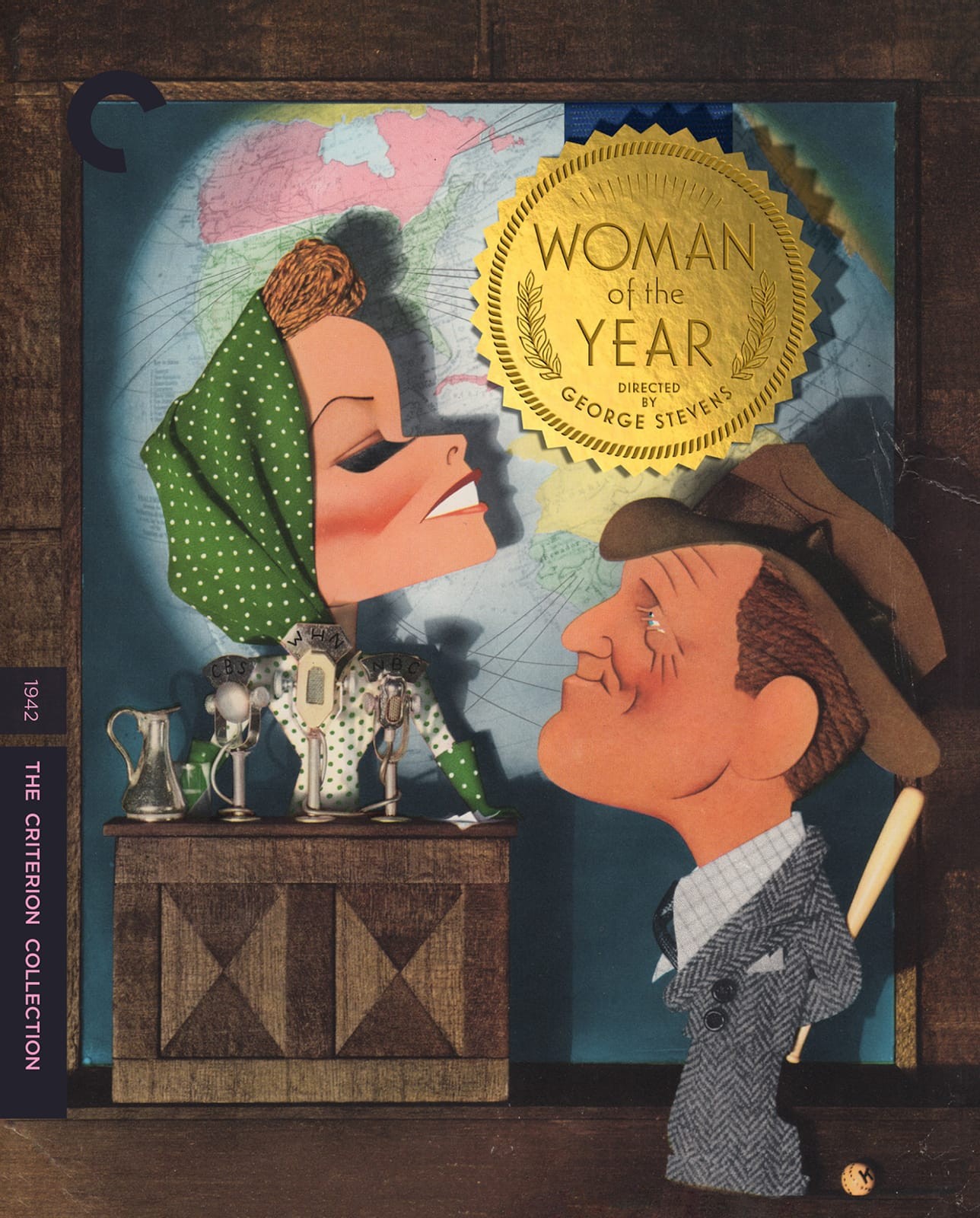 Halfway through George Stevens’s Woman of the Year, there comes a plot thread whose resonances with contemporary global events are hard to ignore. Married couple Sam Craig (Spencer Tracy) and Tess Harding (Katharine Hepburn) are in the middle of a discussion about the prospect of having a child when Tess decides to surprise Sam with a Greek refugee child, Chris (George Kezas). Sam, having just perked up at the thought of fathering his own genetic progeny, responds with barely concealed irritation to his wife’s gotcha maneuver (she literally brandishes Chris from behind the bedroom door), and grows no warmer to the idea of rearing an ethnic child in the subsequent days. But the wrinkle in this subplot, and the material from which Stevens’s film concocts its dubious central argument, is that until Sam returns Chris to the refugee center like an unwanted Christmas toy, he’s the one who spares consideration for the kid; Tess, too preoccupied with her career, can’t even be bothered to hire a babysitter when she needs to attend a social event.

The reactionary politics reflected by this plot development only get more cringe-inducing from this point forward, but they’re already present in embryonic form in the film’s superior first half. Our introduction to Sam, an unpretentious all-American sports reporter for a New York paper, comes at his favorite watering hole, where he and a few other red-blooded regulars are listening in to a broadcast in which Tess, a political writer for the same publication and a celebrated women’s rights champion, insensitively proposes that baseball be put on hold so that national awareness may be directed toward humanitarian efforts related to World War II. The men hiss in unison at the suggestion, which compromises the American way of life, and Sam later takes to the typewriter to air his grievances.

Such a scene epitomizes a cloying tendency in Michael Kanin and Ring Lardner Jr.’s Oscar-winning screenplay to stack the deck against Tess by saddling her with the assumed tastes and ideologies of a successful, independent, careerist female, then identifying those attitudes as un-American. When Sam and Tess’s editor insists that they declare a professional truce, the pair starts dating, and their first two outings are telling. At a baseball game, Tess’s hopeless obliviousness to the sport riles up an entire press box, with one hotheaded correspondent getting particularly miffed when she won’t remove the wide-brim hat that’s blocking his view. Later that night, Tess invites Sam to an international banquet where his lack of multilingualism proves prohibitive, though Tracy gets the scene’s final say when he calls a Middle Eastern man a “silly-looking little jerk sitting there with that towel wrapped around your head.”

Harping on the politics of a 1942 romantic comedy is a dubious game, especially when one considers that the context for Woman of the Year’s American exceptionalism was the pall of Nazism. But the film plays particularly poorly in 2017, and not only because its central narrative thrust involves the question of how to handle refugees, the relevance or lack thereof of the traditional blue-collar American male, and the place of feminism within American life. The film’s conservative agenda also shortchanges Tracy and Hepburn’s chemistry. The former’s earthy restraint and the latter’s electric sensuality are best collided in the early stages of the plot before Sam and Tess’s differing worldviews stir conflict (one alcohol-lubricated back and forth in which the lovers hesitantly flesh out their respective backstories features a sizzling arrangement of intimate close-ups). But the screenplay’s emphasis on Sam and Tess’s disparities quickly fosters an environment that runs counter to Tracy and Hepburn’s finest asset when sharing the screen together: the sense that the actors, and not just the characters they’re playing, can barely contain their affection for one another.

The film’s awkward ending, which Hepburn expressed frustration with, finds a guilt-ridden Tess finally assuming her proper role in the kitchen but still utterly failing to prepare a run-of-the-mill breakfast for Sam. Hearkening back to his work with Laurel and Hardy, Stevens stages the scene as real-time, slow-burn comedy, giving Hepburn plenty of room to find amusing gestural quirks like Tess’s goofy attempt to separate eggs through a sieve—all of which distracts from the scene’s fundamental cynicism. And Woman of the Year certainly has its other auxiliary charms: beautifully textured lighting by cinematographer Joseph Ruttenberg; a luminous, if limited, performance by Fay Bainter as Tess’s motherly aunt; and some enchanting simulations of soft winter snowfall. But it’s hard not to feel berated, in a time that’s seeing the resurgence of a pernicious nationalism, by both the film’s anti-feminist slant and its insistent compulsion to put a box around Americanism.

Clean and sparkling without being scrubbed to the point spotlessness, Criterion’s 2K transfer of Woman of the Year embodies the company’s finesse in capturing the beauty of Golden Age Hollywood for home viewing. Bright daytime exteriors have the same polish as the moodier sequences, like Sam’s late-night visit to Tess’s apartment, in which the ink-black shadows that fall across the lovers’ faces during a kiss still hold room for the revealing glimmers of the city light that streams in through the windows. The soundtrack is equally detailed, with Katharine Hepburn’s louder, brasher voice never upstaging Spencer Tracy’s more under-the-breath mutterings, and crowded sporting event mixes never becoming messy or muffled.

The centerpiece here is George Stevens: A Filmmaker’s Journey, a 1984 documentary on Stevens narrated by his son, George Stevens Jr., that moves chronologically through the director’s career, coloring in his backstory and providing film clips to reveal his industry accomplishments. It’s a treat to see so many then-living screen legends (Ginger Rogers, Frank Capra, Douglas Fairbanks Jr., and more) in one place to provide talking-head commentary, and the doc offers a good opportunity to see significant excerpts of WWII color footage that Stevens shot on assignment. Also noteworthy is 1986’s The Spencer Tracy Legacy: A Tribute by Katharine Hepburn, a comprehensive look at Tracy’s career narrated by an aged but still spry Hepburn. The remaining extras are par for the course by Criterion’s standards: a newly recorded interview with Stevens Jr., an analytical piece by Stevens biographer Marilyn Ann Moss in which she proclaims the director the “Walt Whitman of American film,” an archival audio conversation with Stevens, a fuzzy-looking original trailer, and enthusiastic liner notes by Stephanie Zacharek.