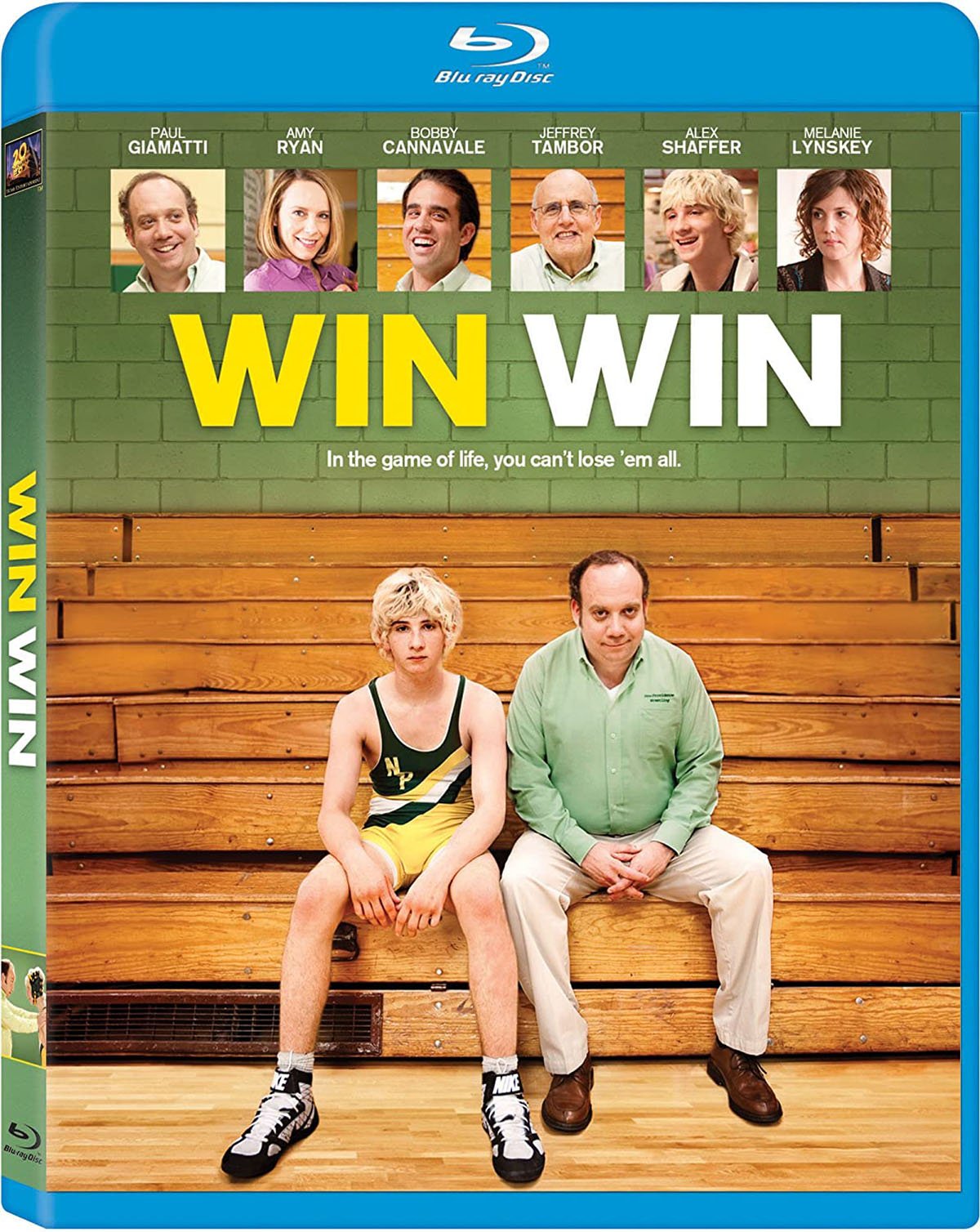 Tom McCarthy has an affinity for the bittersweet. “Whatever the fuck it takes,” a sort of mantra for his film Win Win, speaks to this predilection rather well. The phrase has a determined, even triumphant air to it, and yet it also highlights the desperation that necessitates such a declaration in the first place. Though McCarthy’s latest film is as character-driven and ever-so-slightly off-kilter as The Visitor, his previous effort, here the writer-director seems to favor laughs and resolution to introspection—at least at first. The story uses high school wrestling—both the act itself and the coaching of it as well—as an extended metaphor for control over one’s life: Kyle (Alex Shaffer), a troubled 17-year-old who’s a near-prodigy on the mat, has it; Mike Flaherty (Paul Giamatti), a fortysomething attorney/coach with financial difficulties, doesn’t. The interplay between the two serves as the heart of the film, and their understated father-son relationship represents a turning away from the filial dysfunction—an estranged mother, totally absent father, and mentally incapacitated grandfather—that’s defined Kyle’s life up to this point. Family comes in many forms here, and often blood ties are trumped by accidental devotion.

All the seriousness outlined above takes a backseat to the film’s more lighthearted goings on until the midway point. Win Win balances these two major elements in such a way as to allow some ambiguity as to which of them—the comedic or the dramatic—it’s ultimately more interested in, but the final act makes it clear that it’s the latter. What starts out largely untroubled gradually gives way to a host of fragile, damaged characters, and this proves to be McCarthy’s central concern. Win Win’s focal point is its people: how they do (or don’t) come through for one another, and what they are (or aren’t) willing to do to make that happen. There’s more than one lost soul here, and desperation, however subtle or masked by laughter, abounds. McCarthy presents it with such evenhandedness as to not overpower the whole milieu; it’s almost a cinematic sleight of hand.

Wrestling is not only young Kyle’s escape but that of Mike and his close friend Terry (Bobby Cannavale), who himself is embroiled in an ongoing divorce, as well. “This is your place—control it,” the teen is instructed; Mike is not only guiding the young man, but attempting to wrest back a semblance of control in his own life. Win Win is arguably a push toward more friendly, even mainstream territory for McCarthy, and yet his characters are imbued with such believable pathos by the director himself and the uniformly exceptional cast (with special mention owed to Amy Ryan as Jackie, Mike’s wife) that such formulaic set pieces as everything’s-going-okay montages and the admitted ease with which the film’s tangled narrative threads are resolved work in spite of themselves. McCarthy excels at making the familiar and even cliché ring true in his own way, all the while injecting these seemingly benign underpinnings with an undercurrent of sorrow not to be ignored.

McCarthy certainly focuses on trying times, and yet he comes across as so uncynical a filmmaker that Win Win’s ultimate resolution may be seen not as a reluctance to engage the real nitty gritty but rather as an act of cinematic optimism in a recession-themed film that, not unlike this year’s Bridesmaids, posits that unsentimental laughter may indeed be the best medicine in such trying economic times as these. Which isn’t at all to diminish the film’s most desperate moments: all involved frequently seem at their rope’s end, and not everyone emerges victorious over their own demons. Yet—and this is owed largely to Ryan’s character—we also get the sense that things will one day be okay. The rock of her family (and this film), Jackie is the sort of stabilizing force whose efforts are apparently most notable when absent, as is the case with Kyle’s mother, and almost brings to mind Fargo’s Marge Gunderson for the way she uses her estimable inner strength largely to prop up those around her. Such qualities tend to be easiest to notice when gone, which is exactly what makes Win Win’s best qualities so remarkable.

Excellent on both fronts. Win Win is a visually and aurally restrained film, but Fox’s transfer brings its most aesthetically pleasing qualities to the fore. It is, for instance, often lit by a sort of soft white light that cuts through the grain of the 35mm print to create a light-but-rich feel; color, detail, and contrast are similarly well represented by the 1080p/AVC-encoded transfer. This is the first Blu-ray I’ve watched on a newly purchased TV, and it took some tinkering with the settings to realize that the frequent off-whites which I mistook as an error are in fact an intentionally prominent part of the film’s subtle color palette, the effect of which is to soften the image in a surprisingly pleasing way. The disc’s lossless DTS-HD Master Audio 5.1 track brings a satisfying level of clarity to this mostly talky film, and the understated sound effects—a ceaselessly clanky radiator, bodies hitting the wrestling mat, children playing upstairs—add a nice density to the mix.

The usual batch of superfluous extras—two deleted scenes; the theatrical trailer; a series of three fluff pieces on the film which were likely released as promos before it premiered, none of which runs longer than three minutes; and a music video for the National’s “Think You Can Wait,” which plays over the credits—are backed by a sole semi-insightful featurette. In it, Tom McCarthy and co-writer Joe Tiboni, from whose lives several key aspects of the film were plucked, discuss these biographical details, as well as the fact that they had Giamatti in mind during the writing process. It’s not much, but it’s the best this extras package has to offer.

Tom McCarthy has an affinity for the bittersweet, and Win Win’s best qualities are of the kind that tend to go unnoticed.