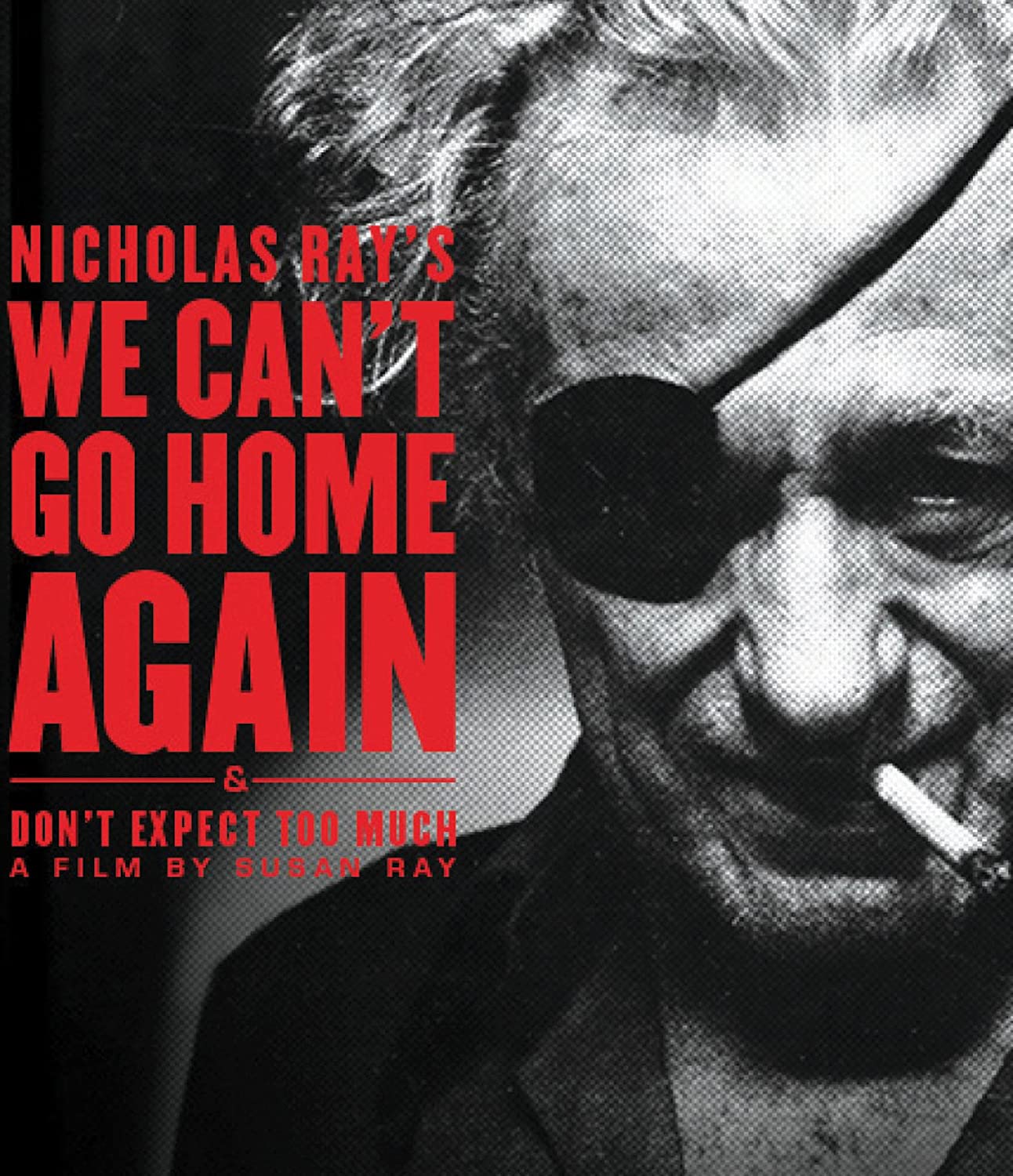 “We don’t think in straight lines,” Nicholas Ray wrote about his final film, the perpetual work-in-progress We Can’t Go Home Again, “and the celluloid strip recognizes neither time nor space, only the limit of man’s imagination.” Conceived and constructed over a three-year period in the early 1970s when Ray lived and worked alongside his students at SUNY Binghamton under commune-like conditions, the film employs a radical split-screen technique—“a multiple-image show” that orchestrates a number of occasionally overlapping images within the larger frame—to put across the endlessly reflexive account of its own production. Cribbing its title (pluralized and first-personalized to emphasize its collectivist bent) from Thomas Wolfe’s admonitory final novel, the film can best be seen as Ray’s valiant, if ultimately failed, attempt to come to grips with what he understatedly described as “the history of our youth over the last few years”—that tumultuous period of sociopolitical fractiousness we tend to monolithically subsume under the rubric “the ‘60s.” Inchoate and at times infuriating, We Can’t Go Home Again nevertheless remains an essential touchstone for understanding the turbulent career of a maverick filmmaker who was as committed to experimentation in his personal life as in his art.

What’s past is indeed prologue. The film opens with a sort of overture scored to the bluesy anthem “Bless the Family,” an impressionistic collage that sketches out recent history in thumbnail form: the ‘68 Democratic Convention, the trial of the Chicago Seven, and the murder of Black Panther leader Fred Hampton by the NYPD. Much of this footage was originally intended for nonfiction film projects that variously fell through, and as a result Ray’s documentary impulse was channeled into We Can’t Go Home Again, where he and his students play quasi-fictionalized versions of themselves. Like the sight of a snake swallowing its tail, the film is essentially the account of its own making. The often minimal narrative mostly falls to connect, undone by all the formalist tinkering, where multiple images tend to distract from, rather than enhance, the narrative through line. What you’re left with—and what remains consistently fascinating—is the daisy chain of teacher/student interactions, a series of semi-Socratic encounters that play out at times as psychodrama, confessional, even improvisatory performance art.

As that opening song makes abundantly clear, We Can’t Go Home Again concerns itself, more than anything other than its own construction, with establishing and sustaining a substitute family amid the maelstrom of social disintegration, and Ray soon sets himself up as everybody’s surrogate father, much as he did with the young cast of Rebel Without a Cause. Nurture isn’t always entirely within his nature, however, for as much as Ray berates those of his own generation for their aptitude for betrayal, he bears the mark of this selfsame perfidy himself: When one of the students lets slip a pathetic anecdote about deliberately contracting syphilis from her dealer, a naked ploy for attention and empathy, Ray signals the other students to pelt her with rotten tomatoes. Despite the fact that the moment was doubtless staged, and maybe even constitutes a cheeky takedown of such overtly emotive histrionics, it remains a disquieting moment with its abrupt, abrasive shift in gears.

On the flipside, there’s the almost conspiratorial complicity with which the camera observes student Tom Farrell as he disgustedly shaves off his beard, hacking away at it with a pair of rusty scissors, all the while lamenting the communication breakdown between his father and himself. Off-camera, Ray can be heard advising: “Make me believe you.” A funhouse mirror in which to observe the play of identification and distortion, the scene also provides the film’s emotional epicenter, a crystallization of We Can’t Go Home Again’s heady mixture of heartfelt emotional examination and deconstructive reflexivity.

Despite the rigorous way the film maintains its multiple-image format through most of its runtime, the dramatic (or even metaphorical) weight of certain scenes seems to call for full-frame treatment, and this is never more so than during the finale in which Ray accidentally hangs himself from the rafters of the commune’s barn. Staged like some backyard horror film, down to the audio constantly dropping out, and played at first almost for slapstick, the scene suddenly changes into an uncannily poetic encomium as the dangling corpse of the director advises his remaining students: “Take care of each other. It’s your only chance for survival. All else is vanity. And let the rest of us swing!” This eerily prophetic chronicle of a death foretold (the always self-destructive Ray would be dead from cancer within six years) surely must rank among the most bittersweet auto-critiques any major filmmaker has ever left behind on film.

The making-of documentary Don’t Expect Too Much, included as a supplement on the Blu-ray, takes its title from the punchline to an existential parable Ray tells one of his students partway through We Can’t Go Home Again: “Don’t expect too much from a teacher.” Picking up Ray’s career in Europe after the fiasco surrounding 55 Days in Peking, the doc illustrates how Ray was drawn back to the States by the turmoil of the late ‘60s, and wound up teaching film at Harpur College at SUNY Binghamton. (It was upon the recommendation of Dennis Hopper, whom Ray had helped edit The Last Movie, Hopper’s head-trippy follow-up to Easy Rider.) Released in tandem with the newly restored We Can’t Go Home Again in time for Ray’s centenary last year, Don’t Expect Too Much provides a fascinating and often moving glimpse into the mind and working method of the director. Fittingly enough, Spanish filmmaker Víctor Erice (who, early in his career, co-authored a book on Ray and his films) gets the last word here, summing up the experience of We Can’t Go Home Again as “a failure, but a film that remains exemplary in its failure.”

The recipient of an exhaustive audiovisual overhaul, We Can’t Go Home Again looks as good as it likely ever will, especially considering the resolutely lo-fi nature of the materials at hand (not to mention, the combination of 16mm and Super 8 film stocks, along with attendant video manipulation). Scrubbed clean and spiffed up, the film nevertheless still retains the patina of the amateurish student effort it admittedly was. Oscilloscope’s 1080p/AVC transfer is, all things considered, pretty irreproachable. Likewise, the inclusion of optional English subtitles helps to overcome any gaffes or hitches in the cobbled-together soundtrack.

Extended interviews with filmmaker Jim Jarmusch and biographer Bernard Eisenschnitz culled from the making of Don’t Expect Too Much present a study in contrasts: Jarmusch warmly recounts meeting Nick Ray during his time at NYU and working as his personal assistant, shares some of Ray’s filmmaking advice, and muses on his mentor’s continuing legacy. Articulate and abstract, Eisenschnitz delves into Ray’s aesthetic approach to widescreen CinemaScope and later multiple-image cinematography (what Ray called “breaking the rectangle”). “Camera Three—Profile of Nicholas Ray” is the same CBS half-hour interview that recently appeared on Criterion’s Bigger Than Life disc: essential viewing, even though interviewer Cliff Jahr, despite protestations to the contrary, never moves the focus off Rebel Without a Cause and the cult of James Dean, and literally licks his lips over every tidbit Ray relates.

Rounding out the bumper crop of extras, Oscilloscope offers some choice morsels that are certain to delight the Ray completists among us: rushes from the short film Marco, produced during Ray’s tenure at the Lee Strasberg Institute in 1977 (alongside recent interviews with members of the cast and crew), as well as “The Janitor,” a vignette (featuring none other than Ray in a dual role) from the 1974 artsy-erotic omnibus Wet Dreams. A study in criminality that bears more than a slight resemblance to the opening of Rebel Without a Cause, Marco comprises two scenes: The first shows the booking of a Black Maria full of student-vagrants, using a set that was clearly jerry-rigged in one of the Institute’s stairwells, followed by the seemingly interminable interrogation of a character who ultimately fesses up to infanticide. The latter scene is little more than an endless series of interrupted takes and retakes; after about 10 minutes of this, you start to feel like you’re watching a Law & Order episode scripted by Samuel Beckett.

“The Janitor,” on the other hand, is simply batshit crazy. Ray plays the disgruntled titular custodian, endlessly sweeping up an abandoned movie house, when he isn’t waltzing around with his broom braying, “Cuckoo,” as well as a puritanical preacher sporting the requisite black broad-brimmed hat and sweeping black cloak, whose two-faced sermon (“It’s a ‘Go Down, Moses’ sort of day”) morphs into an orgy that concludes with various female congregants going down on him, including a young girl who may or may not be his daughter. The double-barreled meta ending brings the fire, if not the brimstone. Lark though it may be, this snippet of dreamy ribaldry exhibits Ray’s continuing fascination with corrupt authority figures; his priapic preacher man even anticipates his cameo as the General in Milos Forman’s Hair. Lastly, there’s a profusely illustrated booklet containing thoughtful and informative essays from Susan Ray, Serge Daney, and Bill Krohn.

Nick Ray’s experimental final film finally finds a home on Blu-ray from Oscilloscope, glossed with plenty of contextual extras, including a late-period nugget or two for the completists out there.