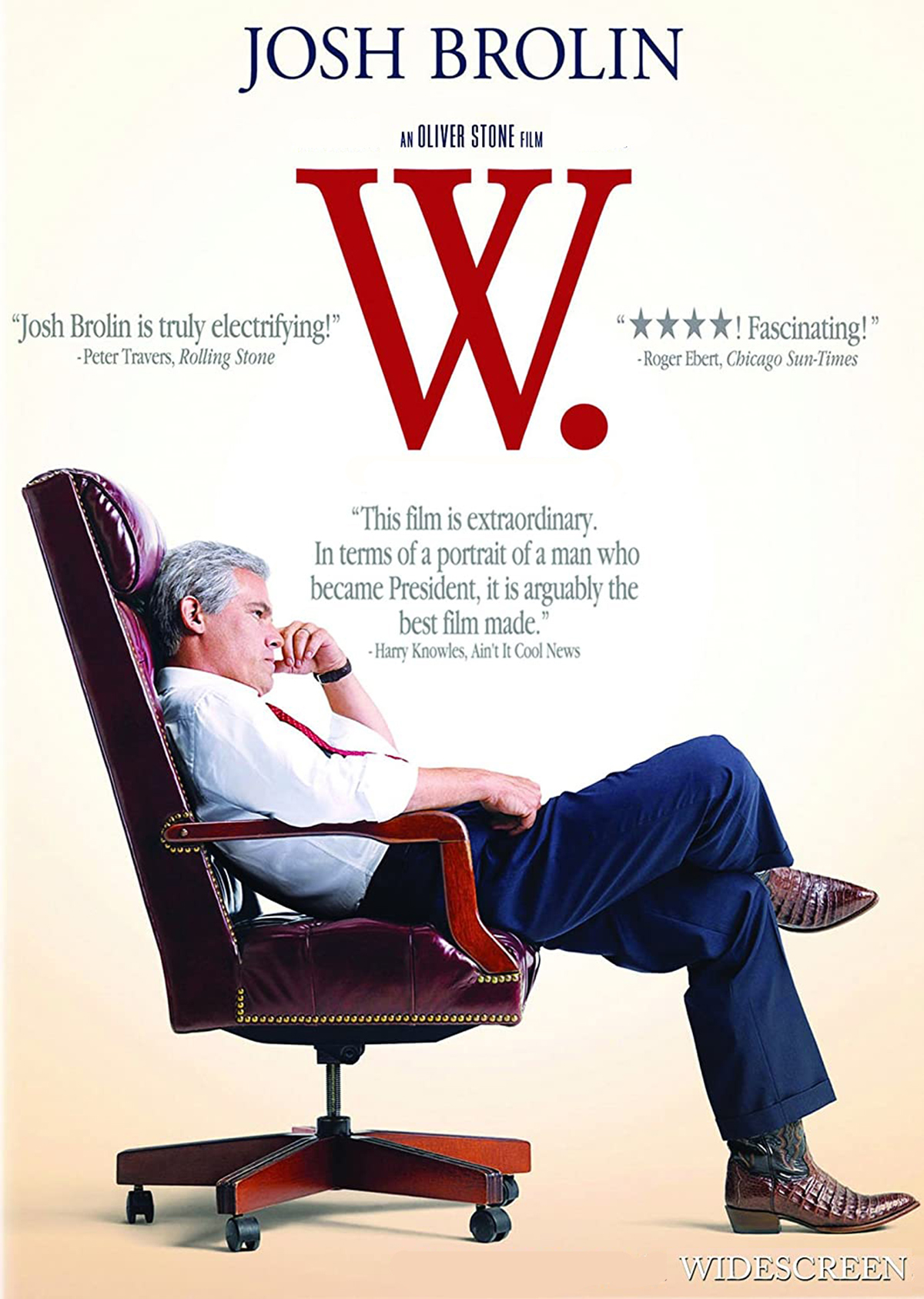 The Oliver Stone of the 1990s might have found something epic in the strange saga of George W. Bush, but he undoubtedly would not have made W., the contemporary Stone’s incomplete rush-job of a portrait of our embattled 43rd president. Hurried into production in order to hit theaters before this year’s election, Stone’s film proves a continuation of his two-decade exploration of titanic leaders and their knotty relationship to both their fathers and the State. Despite superficial ties to past work, however, his latest barely deserves mention in the same breath as JFK and Nixon, two monumental narrative and aesthetic achievements whose intricately constructed psychoanalytic investigations of Americans and America are here replaced by caricatures and Oedipal issues even more facile than those proffered by Alexander. Stone only feigns interest in scope, flashing back and forth between 2003’s buildup to the Iraq War and his subject’s unlikely path to power like a hastily sketched greatest-hits package: Dubya (Josh Brolin) gets drunk, meets Laura (Elizabeth Banks), helps out his father’s 1988 presidential campaign, becomes owner of the Texas Rangers, and then governor of Texas. And yet even with this highlights-only structure, W. is drearily scaled down, unfocused and inconsistent, cavalierly sidestepping countless events (the 2000 election, the war’s execution, Katrina, the ongoing economic crisis) that might have lent complexity and depth to its narrow, faux-evenhanded assessment.

The grandeur of Stone’s finest ‘90s efforts combined imposing aesthetic flair, exhaustive research, and a strong sense of myth, legacy and nation. Those qualities are in minimal supply throughout this misshapen film, which aside from a striking sequence in which the director cuts from the eyes of Dubya to those of a Jesus painting to those of Bush senior (James Cromwell)—thereby relating Dubya to the approving/disapproving gaze of competing paternal figures—employs a conventional aesthetic that furthers the impression that creative ingenuity was a casualty of release-schedule concerns. The blooming lights and deep blacks of war-strategy bull sessions recall Dr. Strangelove, though what Stone has crafted is more like Daddy Dearest: How I Learned to Love Jesus and Bomb Iraq, a seriocomic enterprise which argues that Dubya’s guiding life goals were to gain the respect, and escape the shadow, of his paterfamilias by becoming prez and righting Poppy’s mistake of not taking out Saddam in ‘91. This notion has been promoted by numerous biographers, but Stanley Weiser’s script simplistically and mundanely dramatizes it, with Bush Sr. overtly or passive-aggressively belittling his son while propping up Jeb as a favorable counterpoint, and Dubya responding to this lack of love by trying to punch out Pop, fuming to Laura, and retreating into leaden symbolic dream sequences in which he seeks adulation by making a game-winning outfield catch in an empty baseball stadium.

Whereas Nixon’s detail-laden examination burrowed deep into Tricky Dick’s mind to elicit both empathy and disgust, W. assumes that simply refraining from outright mockery is a means of acting equitably. Rather than frustrating shallow “He’s an idiot” analysis by depicting, say, Dubya’s management of the Rangers or campaign for the Texas governorship—two endeavors that surely required some degree of mental acuity—Stone merely pays glib lip service to the man’s people skills, believing that associating Dubya’s ability to remember frat brothers’ nicknames in 1966 with his use of pet monikers (“Vice,” “Rummy”) for administration staffers is enough to make a case that sociability was his ticket to the White House. The film jumps from one flashback to another without creating meaningful connective tissue between them, making Dubya’s backstory thin—he’s a spoiled alcoholic who through Karl Rove (Toby Jones) winds up president—and contradictory. Dubya begins as a dim, unmotivated boozer, then embraces evangelical Christianity and becomes his father’s suddenly shrewd campaign manager and politico (learning, after an early congressional defeat, that exploiting Southern heritage and religion is key), and eventually comes back to being a moron once he’s in the Oval Office. Huh?

While Dubya’s political ambitions are here driven by a desire to prove his worth to his father, his actual career path is barely glimpsed, so what remains are vignettes spaced out along a timeline, punctuated by out-of-context verbal gaffes and malapropisms—an artistic license that would be more permissible if it was driven by thematic purpose rather than just convenience—and easy jabs, such as the infamous sight of Dubya choking on a pretzel. Most of these digs occur in the film’s 2003 action, during which Dubya is often a backseat spectator to debates between loyal, pro-war cohorts Rove, Dick Cheney (Richard Dreyfusss), Donald Rumsfeld (Scott Glenn), Paul Wolfowitz (Dennis Boutsikaris) and Condoleezza Rice (Thandie Newton) on one side, and reluctant contrarian Colin Powell (Jeffrey Wright) on the other. Affording no insight aside from the commonly held opinion that Dubya’s policy was concocted by right-hand men, these scenes are primarily venues for public figure impersonations ranging from the mildly soulful (Wright’s sincere consideration of Powell’s moral compromise), to the blandly effective (Dreyfuss, Jones), to Newton’s horridly over-the-top, sub-SNL grotesqueness, which makes the surrounding cartoonishness seem realistic by comparison. It’s something like an apocalyptically bad performance, albeit one that—in its upfront admission that W. isn’t really serious-minded—perhaps also proves the most truthful.

American hymns underscore Dubya’s life story but unlike his past political bios, Stone rarely subverts national iconography to comment on American ideals. And though his conception of the elder Bush and hard-nosed Barbara (Ellen Burstyn) are respectful, they’re so slender that the central father-son dynamic comes off as textbook pop psychology. As for Dubya himself, Brolin nails the accent and gestures, yet his expression of the president’s mixture of boot-stomping entitlement and deep insecurity is undercut by Stone’s unwillingness to out-and-out show us many of his formative, pre-Iraq-blunder successes and failures. A late scene gets a chuckle out of the revelation that Dubya’s favorite play is Cats as well as nearly elicits genuine empathy via Brolin’s evocation of Dubya’s rueful regret over striving for and achieving a position of such responsibility. In light of the preceding skin-deep portrait, however, the potentially promising moment proves too little too late, as does a final press conference in which the flustered commander-in-chief fails to list any first-term mistakes. It’s a clichéd vision of vacuity in keeping with this Dubya’s status as a composite crafted from late-night comedians’ jokes and partisan editorial critiques. Like the outgoing president’s polarizing, extremist tenure, W.’s center ultimately doesn’t hold.

Dark scenes lack definition on this widescreen edition of Oliver Stone’s W., which is exactly how the Bush administration and its neocon shadow government liked things. Sound is good, though not as good as not having to hear Bush (or any of his myriad impersonators) trying to construct a sentence or talk about “war on terra.”

A featurette focusing on how the actors slipped into the shoes of the most corrupt, inept, and destructive presidential administration in history would have been nice (if for no other reason than to hear Richard Dreyfusss and Thandie Newton’s presumably differing approaches), but Lionsgate keeps things lean. Stone narrates his way through his audio commentary, referring to Donald Rumsfeld as “Rumsfield” and Condoleezza Rice as “the worst national security advisor” in history, describing his three-act structure, and how the so-called liberal media’s coverage of war was sanitized under Bush-Cheney. Stone also talks about how he got over his hatred for Bush by 2004, though he doesn’t say how or why, and how he tried to keep his film focused on Bush’s point of view. The featurette “Dangerous Dynasty: The Bush Presidency,” directed by Stone’s son Sean, is composed of interviews with academics, authors, historians, and former government officials including Gore Vidal and John Dean intercut with scenes from the film and Bush’s 2002 State of the Union address, which came in the wake of 9/11 and set the stage for the Iraq invasion a year later. The mini doc covers a lot of turf in under 20 minutes, from Bush Sr.’s abuse of power in Panama and the birth of neocon policy to Bush Jr.’s elimination of the judicial branch and politicization of the Department of Justice. Also included: A DVD-Rom that includes a research and annotations guide and theatrical trailers for the film and other Lionsgate releases.

I’m still not quite sure why we needed a dramatization of one of the country’s darkest chapters before it had even ended, but it apparently played a small role in my parents voting for a Democrat in the 2008 election, so I guess it was good for something.

Review: Bruce LaBruce’s Otto: or, Up with Dead People on Strand DVD