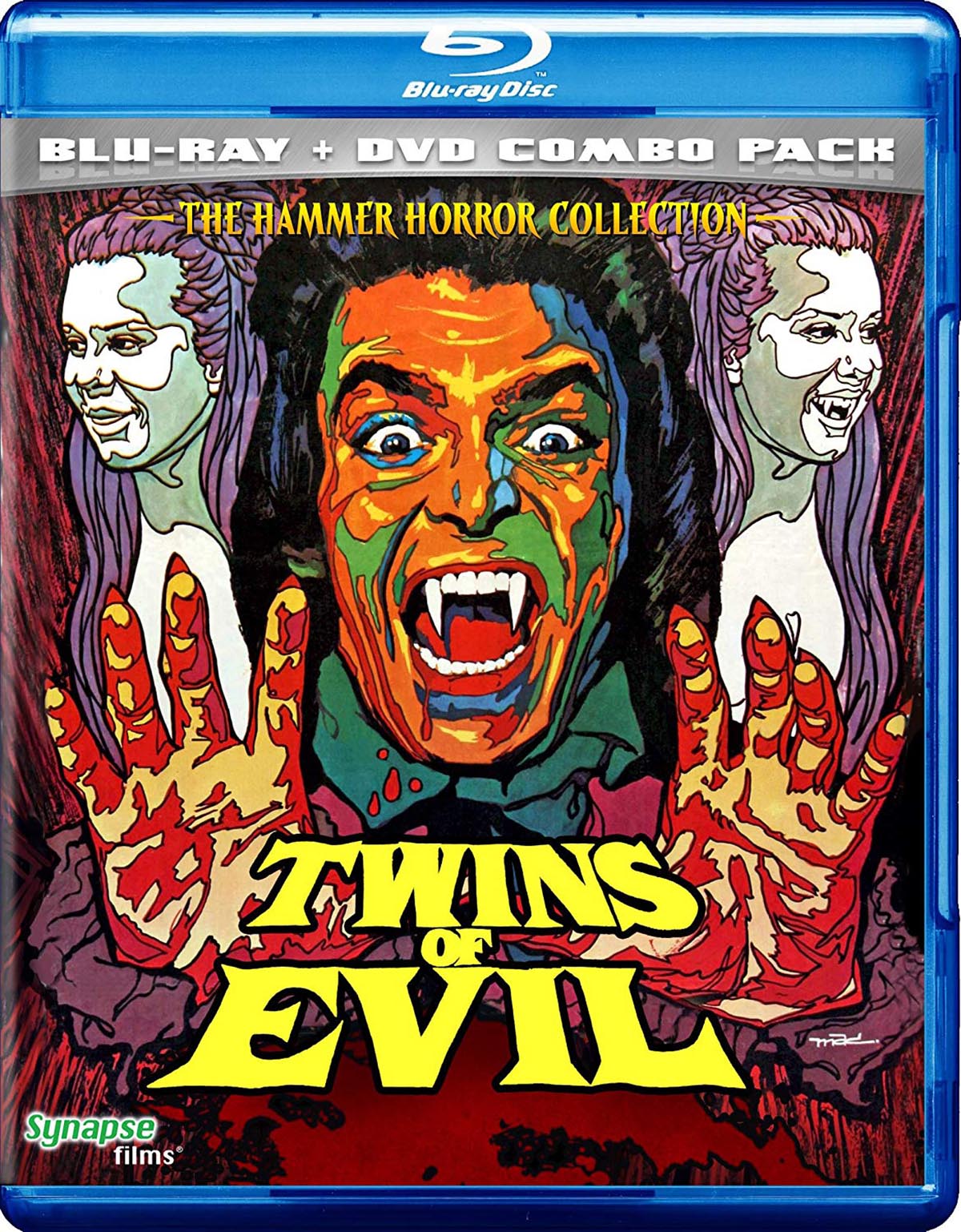 Joseph Sheridan Le Fanu’s 1872 novella Carmilla, an English gothic fever dream brimful with lesbian overtones, has served as the basis for any number of films ranging from Carl Dreyer’s sexless yet surreal Vampyr to Roger Vadim’s little-seen (and substantially sexier) Blood and Roses. Le Fanu’s story even inaugurated a minor cycle of “lesbian vampire” films in the early 1970s, foremost among which were Hammer Films’ so-called “Karnstein trilogy,” whose first installment (The Vampire Lovers) was a fairly straightforward adaptation. The third and final installment, Twins of Evil, is also one of the studio’s strongest late-period efforts, with excellent production values, moodily atmospheric cinematography courtesy of go-to Brit horror DP Dick Bush, and sturdy direction from John Hough, who displays a keen eye for subtle camera movement and striking depth-of-field compositions that make the most of abrupt juxtapositions between foreground and background.

Twins of Evil benefits considerably from seasoned performances by a veteran cast that includes genre icon Peter Cushing, Dennis Price, and Kathleen Byron. And, last but certainly not least, there’s a compelling storyline (penned by Barbarella scribe Tudor Gates) that’s also rich in sociopolitical subtext, sketching (amid bouts of bare bosoms and bared fangs) the predicament of an Austrian peasantry crushed between the intolerance of religious fanaticism and the depredations of a debauched aristocracy. Class ambivalence of this sort provides a welcome subversion of the ramrod-straight patriarchs who featured prominently in earlier Hammer films, and were often portrayed by Cushing himself.

Cushing here plays Gustav Weil (pronounced Vile, so you know precisely who you’re dealing with), the self-righteous leader of “the Brotherhood,” a puritanical sect of witch hunters that, in the film’s cold open, abduct a buxom blonde from her thatched hut, only to subject her sultry feminine vanity to its very own bonfire. Gates’s script freely incorporates elements of other British anti-authoritarian tracts that posed as period films, such as the Vincent Price vehicle Witchfinder General. Gates plays equally loose with the film’s vampire mythology (the vampires in Twins of Evil are free to walk about in the daylight), and establishes only the most tangential link to the Le Fanu source material, albeit in the film’s most successfully sustained set piece, a Satanic rite of bloody human sacrifice presided over by apathetically decadent Count Karnstein (Damien Thomas) that results in the reanimation of his long-dead ancestor Countess Mircalla Karnstein (Katya Wyeth)—Mircalla, of course, being an anagrammatic recombination of the name Carmilla.

Events are set in motion with the arrival in town of the titular twosome, Weil’s newly orphaned nieces Maria and Frieda (well-played by Playboy Playmates Mary and Madeleine Collinson). Sure enough, though the girls may look alike, their natures are diametrically opposed: Maria is shy and withdrawing, while Frieda is fiery and rebellious. Frieda, to boot, is inexorably drawn toward the principle of evil represented by bored Count Karnstein, who initiates her into the realm of vampirism along with some convenient palaver about only the truly evil surviving a vampire’s bite. Director John Hough gets a lot of mileage out of empty mirrors and dissolving reflections, reminiscent of Roman Polanski’s Fearless Vampire Killers, during this and subsequent sequences.

Twins of Evil also boasts a nicely ambivalent ending. With both figures of order and authority dead, the camera looms over the survivors, the prototypical romantic couple clutching each other for support on a mezzanine in the foreground, as though teetering on the edge of the calamitous plunge that has just claimed Gustav Weil. The final shot lingers on the decayed, skeletal remains of Count Karnstein, supplying a kind of visual analogue to the final line of Edgar Allen Poe’s story The Masque of the Red Death: “And Darkness and Decay and the Red Death held illimitable dominion over all.”

Fog-shrouded forests (both real and studio-bound), massive manorial halls filled with grotesque statuary lit by fitfully flickering torchlight, the mucky square of a remote Austrian village, Bush and Hough make the most of their limited locations, utilizing expertly rendered set designs and (near the film’s climax) some subtly suggestive blood-red and sickly green gel lighting. Synapse’s 1080p/AVC transfer is robust, if not unflawed, with little in the way of blemishes or artifacts, though the muted color scheme never truly pops, save for the abbreviated appearance of those aforementioned gels. Given the predominance of dark browns and deep blacks in the film’s palette, this is perhaps not as surprising as otherwise. The mono DTS Master Audio track carries the dialogue clearly and keeps Harry Robertson’s rousing, rhythmic score front and center. The Blu-ray disc also contains an optional track that isolates the music and effects work.

Synapse Films have really outdone themselves when it comes to the breadth and depth of the extras in this package. An excellent feature-length documentary, “The Flesh & the Fury: X-Posing Twins of Evil,” delves into the history of Hammer Films, the shifting tenor of the times and how it influenced the horror genre, the background and influence of Sheridan Le Fanu’s Carmilla, as well as providing a detailed discussion of Twins of Evil from conception to legacy. Talking heads include a veritable who’s who of horror and cult films experts, in addition to the film’s surviving cast and crew. Next up there’s a 30-minute featurette that tours the Kinsey Collection of Hammer-related props and memorabilia—only a few of which pertain specifically to Twins of Evil. It’s less essential viewing, perhaps, but nonetheless pretty fascinating stuff. There are various TV spots and different versions of the theatrical trailer. The justifiably deleted scene is a misguided (not to mention anachronistically flavored) musical number (!).

Review: Powell and Pressburger’s A Matter of Life and Death on Criterion Blu-ray