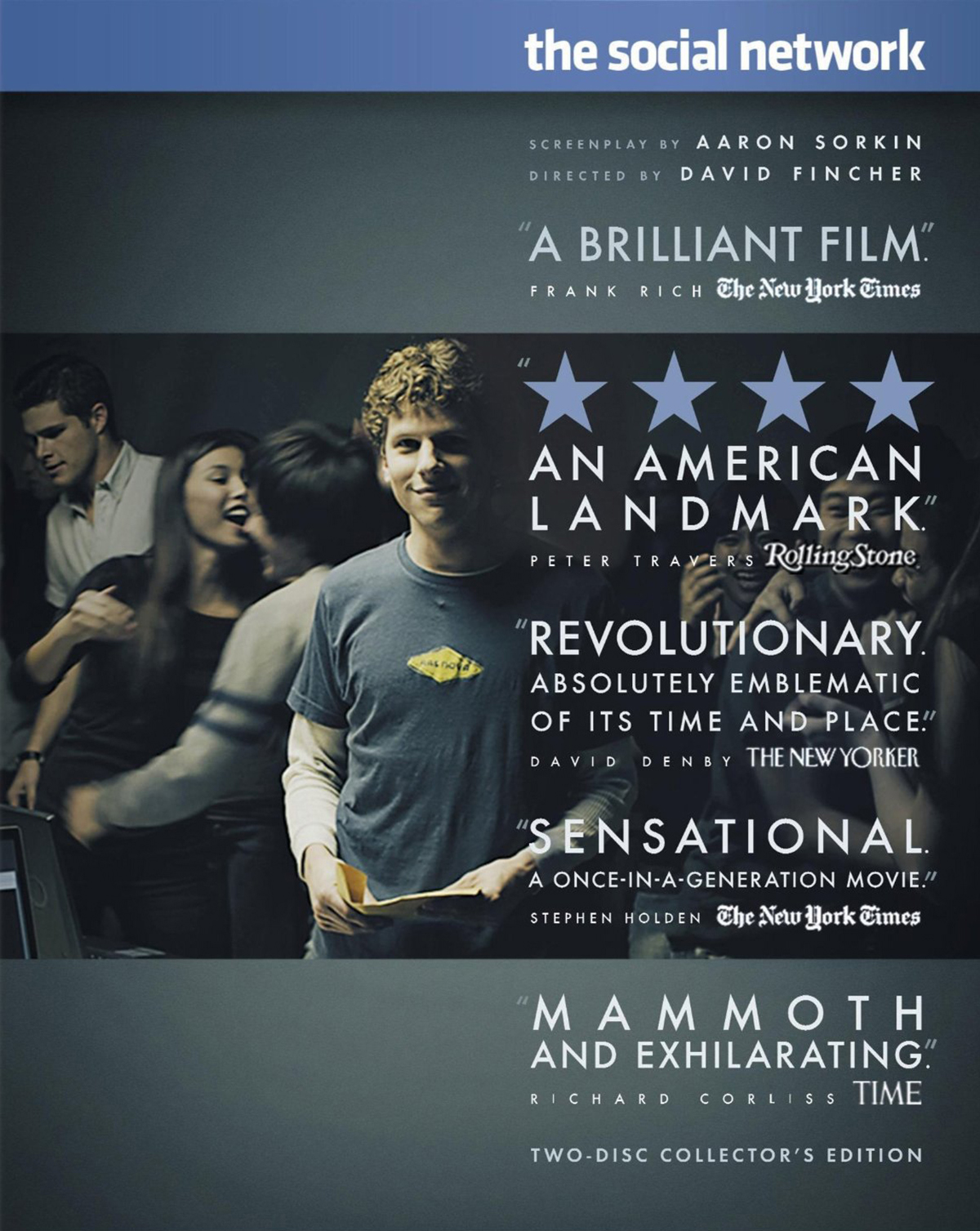 A portrait of the prick as a very young man, The Social Network uploads a fictionalized account of the birth of Facebook and the monumental success it reaped for noxious billionaire co-creator Mark Zuckerberg (Jesse Eisenberg). David Fincher’s film is, of course, concerned with the already-clichéd topic of “how we live now,” yet unlike a fraudulent poseur like Catfish, it occupies itself less with underlined questions about “the online experience” than with the relationship between the site and its forefather, a Great Gatsby-lite Harvard undergrad driven by a need for acceptance from the school’s elite, an ego consumed with Big Idea aspirations, and a nagging need to compensate for his personality failings through unbridled ambition.

As written by Aaron Sorkin (loosely based on Ben Mezrich’s The Accidental Billionaires) with his trademark brand of blistering rat-a-tat-tat verbal volleys, it’s a story ultimately rooted in Zuckerberg’s own personal Rosebud, Erica Albright (Rooney Mara), who in the borderline-fast-forward opening scene becomes so repulsed by not just his arrogance but the condescension that accompanies it (a dig at her B.U. education proves the final straw) that she dumps him, albeit not before explaining that, when he’s rich and famous, women won’t hate him because he’s a nerd: “It’ll be because you’re an asshole.” That slur scars Zuckerberg deeply, propelling him that evening to drunkenly produce a cruel online girl-rating game called Facemash (made with student profile pics stolen from the university’s databases), and soon afterward to design Facebook itself, a site that—as articulated by co-founder, CFO, and Zuckerberg’s symbolic conscience Eduardo Saverin (Andrew Garfield)—revolves around the simple desire to meet a girl. A subsequent encounter with, and brush-off from, Erica, who’s still smarting from Zuckerberg having called her a “bitch” on LiveJournal, doesn’t lead him to introspection and change but, rather, to immediately feel that “we have to expand.” Expand Facebook naturally does, morphing from a college campus niche service to a global goliath and, along the way, prompting two separate lawsuits from spurned former partners.

Throughout, the director cross-cuts back and forth from past events to present litigious depositions partly as a means of exploring and challenging his subject’s justifications for his actions. Yet Zuckerberg largely remains a static figure, or at least a man for whom revelations regarding his own character and behavior arrive only after the damage has been irreparably done. In that sense, Fincher and Sorkin’s study of success functions as a tragicomedy about a socially repugnant person who, in the film’s central irony, created a ubiquitous venue for friendship while achieving merely alienation for himself. Whereas Zodiac immersed itself in serial-killer case-file details, Fincher’s latest speeds along a veritable information superhighway, flying through conversations, scenes, locations, and time frames with an alacrity that evokes modern ADD media interfacing: consume, process, respond, move on!

Fleetness doesn’t mean glibness, however; Fincher segments and layers his material at a pace befitting the meteoric ascendancy of Facebook itself, and without the grandstanding that’s sometimes marked his work. The auteur can direct the holy hell out of a movie, yet in this case he refuses to indulge in vertiginous tracking shots and look-at-me CG tomfoolery, placing the focus less on overt aesthetic showmanship than on an atmosphere of impending doom born from Zuckerberg’s warring urges to erect and destroy—though cinematographer Jeff Cronenweth’s sleek, shadowy-brown high-def cinematography is to swoon over, as is Trent Reznor and Atticus Ross’s sexy, malevolent score. Fincher’s sumptuous evocation of Ivy League privilege is inviting and unnerving and his pacing is both zippy and sly, with the film swinging and popping so smoothly that it’s almost possible to overlook the fact that certain incidents, including Eduardo’s fiery quarrel with a possessive girlfriend (Brenda Song), border on broad sitcom terrain otherwise generally avoided by Sorkin’s sarcasm-overloaded script.

In a telling juxtaposition, Fincher jumps between Zuckerberg creating Facemash and a decadent party at one of the Harvard “Final Clubs,” whose admission the geek covets. It’s an acute reflection not only of the motivations behind his inspired computer wonkery, but also of the way his work will replicate—and cannibalize, as further suggested by an animal-cruelty subplot involving chickens eating chickens— such social relations. Desperate to be liked, Zuckerberg begets Facebook so everyone can be president of their own exclusive club. The idea of “exclusivity,” though, is what draws the ire of WASPy twins Tyler and Cameron Winklevoss (both played by Armie Hammer) and their friend Divya Narendra (Max Minghella), who, after hiring Zuckerberg to work on their Harvard Connect (a Facebook-ish site that would court users via the esteemed Harvard.edu suffix), become enraged over Zuckerberg pilfering their idea. An ensuing debate over what truly constitutes intellectual property theft, however, never quite materializes. That’s because The Social Network’s more pressing concern is Zuckerberg’s gargantuan sense of superiority, which is so rampant that he callously admits to a deposition lawyer that he’s paying the man little mind, and which is ultimately expressed by his triumphant attempts to circumvent Harvard’s exclusionary old-boy power structure (also spied in the Winklevosses’ U.K. rowing match) by creating a new Internet world order in which technology enables nerds to inherit the Earth.

Zuckerberg’s betrayal of the Winklevosses pales in comparison to that perpetrated against trusting Eduardo, whom he screws out of his share of the company, thanks, in part, to the influence of entrepreneur and Napster co-founder Sean Parker (a suavely sinister Justin Timberlake), who assumes the role of devil on Zuckerberg’s shoulder. “I was your only friend,” Eduardo mournfully tells Zuckerberg across a table surrounded by lawyers, and the sadness in both men’s eyes is compounded by the fact that Zuckerberg was compelled not by wealth, but simple jealousy—of Eduardo’s membership into the prestigious Phoenix Club, to be sure, but more fundamental still, of anybody more congenial than he was. Which was just about everybody. In this respect, The Social Network is at once a snapshot of a particular era and a universal story about trying to fit in, and the disastrous isolation such endeavors can entail. And at its core is Eisenberg’s bravura performance, which straddles a fine line between conveying the repugnance of his protagonist and making him pitiable, the actor capturing the intellectually domineering haughtiness of Zuckerberg as well as, in quick glances away from people and back to laptop screens, his comprehension of—and mild guilt over—his own reprehensible conduct.

In a final scene that mirrors its opening counterpart, a lawyer (Rashida Jones) tells Zuckerberg, “You’re not an asshole, Mark. You’re just trying so hard to be,” thereby raising the issue of perceived versus actual reality, and whether there’s any difference between the two. It’s a question The Social Network lets linger with regard to both Zuckerberg, a charmless, self-centered dickhead nonetheless capable, however slightly, of reflection and remorse, as well as to Facebook’s own status as some sort of culturally revolutionary institution. “We lived on farms, we lived in cities, and now we’re going to live on the Internet!” proclaims the cocksure Parker moments before he’s busted for cocaine possession, thereby ending his Facebook tenure. Yet Fincher confronts this potential 21st-century reality with ambivalence born not from the potential harmfulness of such a paradigm, but instead from the understanding that it affords no substantial step toward greater social evolution: In the end, in a pub or online, we’re all still waiting for our version of that desirable girl to see and validate our inner goodness and worthiness. In that astute uncertainty, his amusing, electric, keenly observed recent-history lesson proves a film to love, or to speak in Facebook’s lingua franca, to Like®.

I’ve been putting off calibrating my television since I bought it, in part because its default settings have been kind to just about everything I’ve played on the set in a month’s time—except for The Social Network, which appeared obscenely dark when I plopped it into my Blu-ray player. The film has been described by critic Nick Davis as resembling “a state funeral for the family cat,” and now that my TV has been successfully calibrated, I can report that the film is as somber as I remember it. Except for exceedingly inky black levels and some pasty skin tones that can likely be blamed on an overzealous makeup person, this representation of a needlessly “dark” film’s aesthetic is never less than striking. Every bit as memorable and dubious is the Trent Reznor score, which skulks above the crystal-clear dialogue like a rabid animal looking for a good fuck.

“New dick” doesn’t quite have the same resonance as BLEEP, admits David Fincher on his commentary track. And so The Social Network secured a PG-13 rating, but despite that lame concession to its studio, you can’t call the film a toothless dog. An amiable and interesting listen, the frequently bleeped-out Fincher is more open about praising the work of his collaborators than he is about elaborating on his obsessive directorial process (he tells us how many times Jesse Eisenberg had to throw a beer bottle before hitting the director’s desired mark, but that’s about all he reveals). But Aaron Sorkin and select cast members—Jesse Eisenberg, Andrew Garfield, Justin Timberlake, Armie Hammer, and Josh Pence—pick up Fincher’s slack on their own commentary track. Sorkin and Eisenberg, for example, reveal that Fincher filmed 99 takes of the opening scene, though neither is critical of the director’s approach. In fact, Eisenberg, sounding every bit as anxiety-inducing and prone to self-flagellation as he is typically does on screen, reveals that he wishes Fincher had shot a few more takes of one scene because he was tired when he filmed it and he sounded like he was in a commercial. Though Sorkin and the actors are unconvincingly spliced together to sound like they were all in the same room, their insights, especially Eisenberg and Garfield’s, into The Social Network’s making and significance prove more valuable than Fincher’s own.

On disc two, watch out for Garfield and Timberlake fishing for buggers throughout their sessions discussing the film’s screenplay with Fincher and Sorkin, perhaps proof of what Garfield later describes as the “comfort” he felt while working on the film. What’s most striking about the feature-length, four-part “How Did They Ever Make a Movie of Facebook?,” essentially a celebration of the film’s remarkable use of language, is not the sight of Fincher often being visibly pleased with the outcome of a take but the amount of time he and Sorkin and his actors devoted to scrutinizing their characters’ motives. Those wishing for even more technical elaboration on the film’s making will be pleased by the remaining featurettes: “David Fincher and Jeff Cronenweth on the Visuals,” on which Cronenweth extols the wide range of colors made available to him by the cameras the filmmakers decided to use; “Angus Wall, Kirk Baxter and Ren Klyce on Post,” which is constructed almost as elegantly as the film itself; and “Trent Reznor, Atticus Ross and David Fincher on the Score,” in which Reznor discusses producing music that will be applied to images that aren’t of his own making (though his score does sound as if it could just easily be set to a montage of rotting animal corpses). Rounding out the disc is a multi-angle scene breakdown, an interactive music exploration, and a featurette on the Swarmatron sound machine used for parts of the film’s score.

This elegantly and scrupulously produced Blu-ray essentially serves as an all-in-one For Your Consideration campaign for David Fincher’s film.

Interview: Jesse Eisenberg on When You Finish Saving the World and Fleishman Is in Trouble