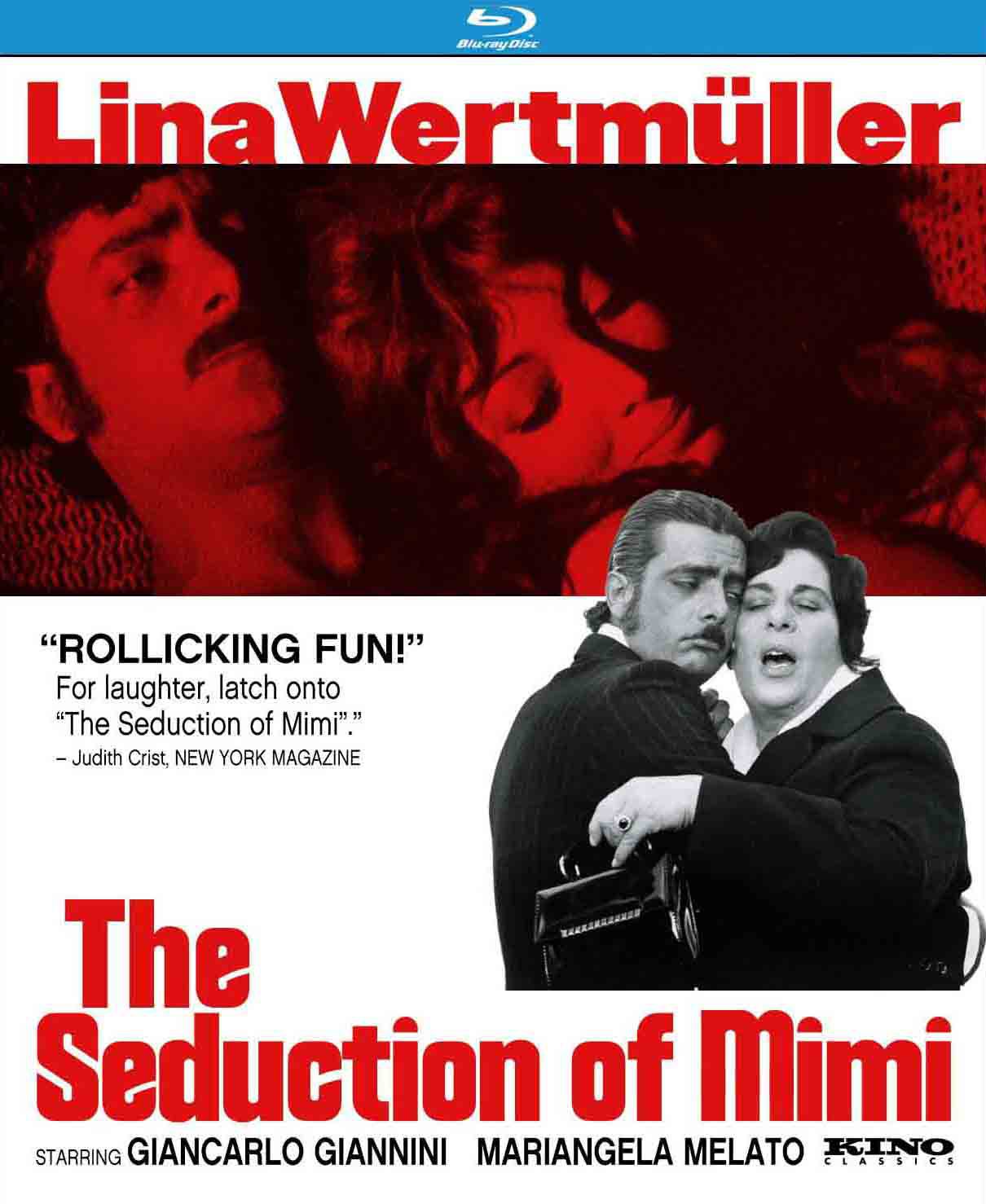 Even for Lina Wertmüller, The Seduction of Mimi is a body-conscious film, so much so that destiny is coded into flesh. Most works by the Italian director and provocateur pivot upon hyper-specific sex acts, often cringe-inducing ones; her characters exchange and withhold intercourse like currency, which would make the obese women that pop up in her narratives banks unto themselves. But in The Seduction of Mimi, the first of her movies to star Giancarlo Giannini and her first regional farce, the corporeal self is less a commodity than an inheritance: It both determines and symbolizes how far one can fling himself in life. That isn’t terribly far in the case of the title character (Giannini), a spastic Sicilian (i.e., an obligatory underclassman) whose facial hair even emotes.

Mimi toils as a day laborer, dirtying his body—his only true resource—with sulfur and returning home to a wife who’s too modest to make love to him. His frustration mounts until, in a general election, he votes communist to spite a local family of mafiosos that represent everything he despises about his patrie. For lashing out at tradition, he’s immediately blacklisted from his job; he ventures north to find work, but quickly realizes that the irritatingly two-party political system has followed him. The same mobster bloodline is recognizably in charge of everything, and the right cheek of every cousin in the powerful clan bears the same constellation of birthmarks. (Wertmüller zooms in hard on these facial features whenever Mimi is preparing to take an opportunity; the triad of moles becomes a motif, reminding him of his subordinate status.)

The only alternative to these freckled hoodlums is socialism, which Mimi could care less about when its practitioners don’t abuse him; many of the communists he meets have merely obscured their prejudices with a patina of Marxism, and they chide Mimi with the pejorative nickname “Sicily.” But then he falls for and shacks up with a big-eyed Trotskyite (Mariangela Melato), who knits Mondrian-esque patterned sweaters for her svelte frame. Inevitably, a cut to a close-up of a swollen belly heralds the joyous coming of a bastard son.

The farcical content, though just as regionally focused as that of Wertmüller’s most overtly political films, is weirdly compartmentalized here for the first two acts; we often feel like we’re watching a portmanteau film, with one side comprising Mimi’s social life and the other his domestic mishaps. The gag inherent in this setup is that Mimi is politically moderate enough to both work with fascists and pitch woo with commies, but the respective plotlines lay atop one another awkwardly, like olive oil and San Pellegrino. (In the lovey-dovey scenes, Wertmüller acts like she’s shooting and editing a rom-com; Giannini and Melato make gooey faces and hand gestures at one another, and time slows way down when they reach the bedroom.)

The third act is the payoff, wherein the film gnarls the domestic and the political spheres with sexual anxiety a la Pietro Germi: Mimi returns home to find his wife knocked up and himself a cuckold, and never mind that he’s already got a bastard with another woman. It’s Niagara Falls-broad irony, but not without purpose, because it reveals the singular principles that have been guiding the protagonist. A hard-working layman, Mimi believes in the people but not in the protest (he refuses to unionize after becoming a foreman at the Fiat factory), and believes in patriarchal virtue, but not in the petty violence that upholds it. He goes momentarily berserk on his fallen bride, with his limbs and hair locks erupting spasmodically and his eyes bulging with slighted perniciousness. But after cooling down, he plots a lineage-scrambling revenge of wits rather than brute force, and goes about impregnating a rotund, middle-aged housewife to accomplish his scheme. (Wertmüller empowers this husky woman with off-kilter sensuality; her engorged bottom becomes a proud and surrealistic distortion of normalcy we take for granted, a Dali clock of an ass melting itself out of sex objectification.)

The manner in which these situations poke fun at Italian society circa 1970, especially the anachronistic machismo that continues to dog it, isn’t entirely lucid. Mimi’s too gawky a transitional figure: He’s determined to defend his male honor, but to do so modernly, and his failure to compromise between antiquated obligations and the appeal of a newer, more civilized code isn’t easy to sympathize with. But whenever this battle plays out between Mimi’s mind and his body, along with the bodies of several other characters, the film’s message becomes more universal. Giannini’s a frustrated Buster Keaton, capable of audaciously physical derring-do, but set on holding back in prideful prudence until he can’t contain the primitive urge any longer. By then, however, it’s usually too late. Mimi was born with a flailing, assiduous body, but also a common body, lacking tokens of prestige. Silencing him is as simple as turning the other cheek to reveal a cluster of signifying beauty marks.

Wertmüller and cinematographer Dario Di Palma—nephew of Carlo, who shot the related Divorce, Italian Style—love crosscutting wide land- and cityscapes with small human details, until the cities Mimi inhabits appear dewed with gestural beads. The clarity afforded by this superlative 1080p transfer allows for better scrutiny of these macro/micro-swapping moments, and also gives breathing room to further regional subtexts; the aridness of the Sicily-set opening and denouement is cast in sharp relief with the overcast claustrophobia of the urban, northerly middle. The blooming colors are also seductive, from Mimi’s flamboyant ties (which lead to a risible misunderstanding) to his mistress’s mod shawls.

Goose eggs! No…wait, there are some production stills. But that’s all.

The Seduction of Mimi is socio-political discourse, Italian style: Sex speaks louder than words on any given subject.