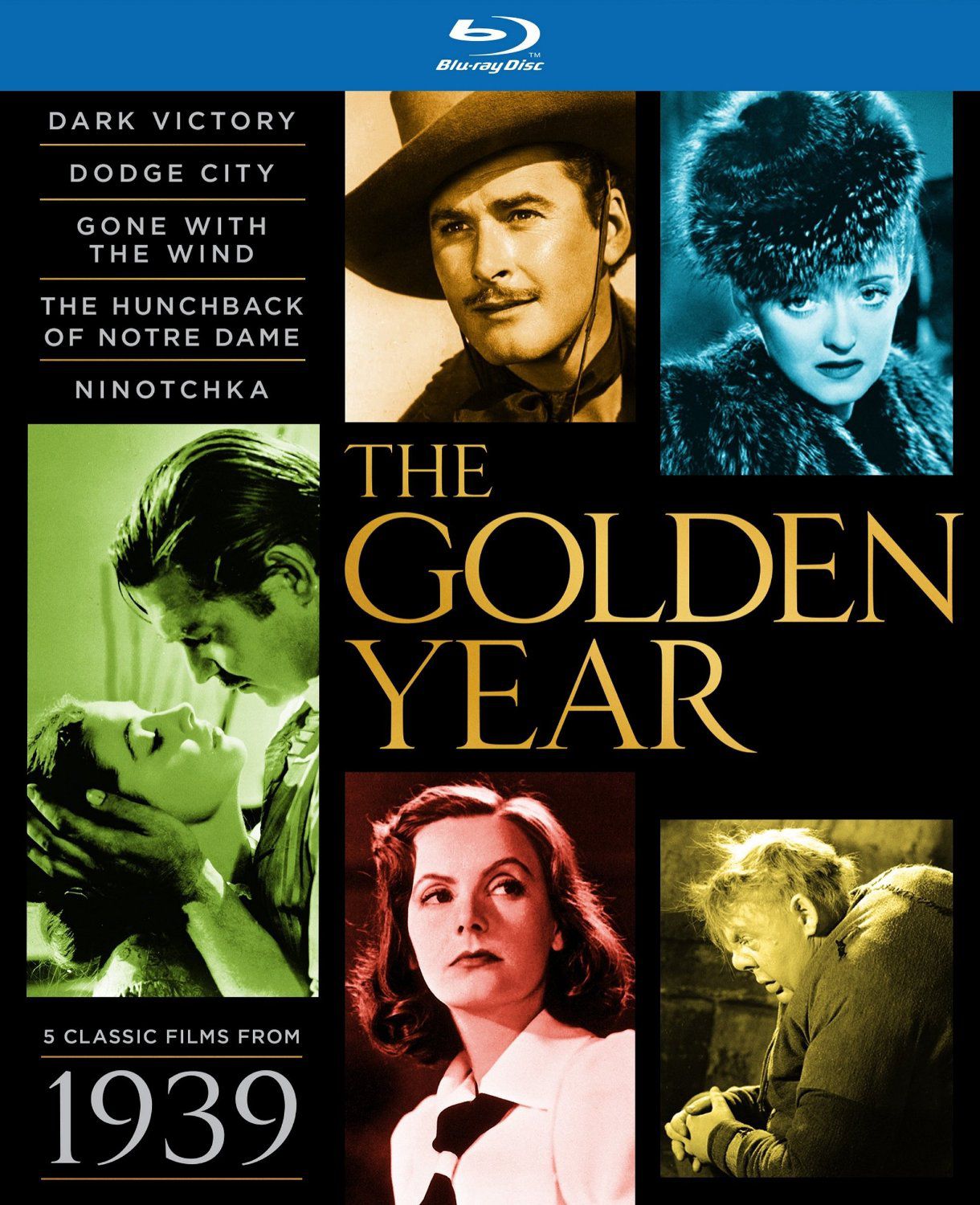 At the end of 1939’s Stagecoach, one man turns to another and says, of a soon-to-be married couple, that they’ll be “saved from the blessings of civilization.” Although director John Ford rarely constructed moments or films that played as self-reflexive commentary on the circumstances of film production, this is an exception. Depression-era constraints were steadily shifting into pre-war anxieties, but in Hollywood terms, the blessings of prosperity were bountiful, with little necessity for a savior whatsoever. Retroactively termed the “Golden Year” of Hollywood, 1939 represents a brief moment where socio-economic circumstance merged with technological innovation and was punctuated by social clarity, producing a slate of films that persist as not only signposts of the period, but emblems of corporate art that, even at its most sprawling in the case of Gone with the Wind or The Wizard of Oz, manage a sensibility that consistently reorients the proceedings through blending classical and modern notions of style, while relying on Fordist terms of efficiency. As scholar Thomas Schatz states it, the genius of 1939 was the genius of the system.

That genius allows for high quality films to hit all conceivable demographics. Dark Victory, for example, is a prototypical “woman’s film,” but there’s nothing automatic or stilted about it, beyond a requisite ending that sees Judith (Bette Davis), a young socialite, go blind following the effects of a brain tumor. That’s an inevitable end, since the film’s “medical gaze,” to borrow a term from scholar Mary Ann Doane, subordinates Judith’s subjectivity to the prognosis offered by Dr. Steele (George Brent), who peers, prods, and eventually puddles at the feet of Judith, whose loving affections are yielded through a Stockholm Syndrome-cum-Florence Nightingale effect. Aside from the film’s gender politics, what’s also notable about Dark Victory for 1939 is its genre-blending, taking more overt melodramatic elements and lending them an educational, even science-fiction bent, where the revelation of “prognosis negative” is treated as a moment for audience edification as much as a turning point for Judith’s unraveling. Rife with religious symbolism, the film nevertheless considers corporeal salvation via prayer a dubious proposition; when close friend Michael (Humphrey Bogart) tells Judith that looking at her, in a healthier state, “makes me believe in those prayers I’ve been saying,” it’s just moments before Judith’s blindness sets in.

A more severe and castigating critique of piety occurs within The Hunchback of Notre Dame. Director William Dieterle is clearly indebted to the films of Josef Von Sternberg, particularly The Scarlet Empress, for its heavily expressionistic visual style. Dieterle often shoots statues and objects as markers of cultural doom and ruin, despite their towering stature and alleged beauty. Few Hollywood films take the Catholic Church so ferociously to task as this one; when Esmerelda (Maureen O’Hara) arrives at a French church to pray, she’s told by Frollo (Cedric Hardwicke) that a “gypsy” isn’t welcome. That alone would simply be a caricature of power abuse, but when Dieterle glimpses those kneeling and praying, their requests are wholly solipsistic and vain, down to pleas for beauty and adoration. Of course, these are also the desires of Quasimodo (Charles Laughton), whose presence soon draws forth the church’s hypocritical claims, but the film stages these outcomes in such stark, ambiguous terms, that the moral trappings of Victor Hugo’s novel don’t reduce Dieterle’s adamancy that Catholic indulgences serve to propagate a discriminating, crippling tradition.

If Dieterle uses The Hunchback of Notre Dame, in part, to examine the status of refugees in the United States, Ernst Lubitsch’s Ninotchka takes that aim as its raison d’être. Even the film’s promotional materials evoke its status as an outsider product; not only does the film’s original poster promise that “Garbo Laughs,” but under the film’s title, it advises: “Don’t pronounce it—see it!” With Lubitsch directing, Billy Wilder and Walter Reisch as writers, and capped by Greta Garbo’s first talkie performance, MGM used the film’s exile credentials as its selling point, a decision that would be virtually unthinkable in contemporary marketing schemes that largely whitewash, or at least Americanize, the ethnic and cultural specificities of cast and crew.

Perhaps more noteworthy is just how remarkably the film plays, especially as a complement to Lubitsch’s To Be or Not to Be three years later. These are films of strident political critique, wholly politically incorrect, but thoroughly sensitized to identity formation via cultural factors; when Ninotchka guffaws at Leon (Mervyn Douglas) after he falls from a chair, it’s less important that she’s laughing than why, especially since Leon’s string of punchline jokes have failed to move her. Much like Sullivan’s Travels made two years later, Ninotchka is a profusely difficult work on the nature of comedy, not only in times of nationalistic strife, but as an idea, implicitly asking if human civilization could conceivably reach a point where it would be comprehensively inappropriate to laugh.

That Hollywood filmmaking afforded the space for such a philosophical mode of popular culture is endemic of the historical period, where technological innovation went hand-in-hand with verbose, considered themes—not in place of them. A film like Dodge City is an excellent example, since its Technicolor cinematography (among the first westerns to use it) provides director Michael Curtiz a carefully balanced and lensed color palette throughout, which doesn’t deter from Errol Flynn’s continued streak of films that consciously romanticize volatile heroes, picking up where The Dawn Patrol left off. Nevertheless, Curtiz balances those aims with a narrative that complicates West-moving mythology in sporadic critique of progress attained through violence, comparable to how Victor Fleming stages Gone with the Wind for the capabiltiies of technology to visualize and periodize while reducing the plights of a nation to the anti-romance of Rhett (Clark Gable) and Scarlet (Vivien Leigh). The diversity of output from Hollywood in a single, calendar year continues to refute temporal constraints, as 1939 has attained a mythology of its own and persists more as an idea than a wholly reconcilable or retraceable point of large-scale film production.

Warner Bros. Home Entertainment has assembled a beautiful packaging for these five films, four of which are making their debut on Blu-ray. The films come in a tightly bound booklet with a sleeve for each disc, protected by a thick slipcover. Some will inevitable complain about the lack of cases for each disc, but careful handling of the discs and sleeves should prevent scratching or damage. As for the discs themselves, each film has been given studious treatment, restoring image and sound to their fullest capacity, with only slight image issues throughout. Most notable is a slight problem with focus, especially on Dark Victory in close-ups, where a few shots appear inadvertently blurrier than others. Nevertheless, depth and clarity remain largely consistent, especially on the discs for The Hunchback of Notre Dame and Ninotchka. The color films look spectacular as well; Dodge City perhaps benefits the most from these upgrades, since its colors and saturation look wholly remarkable. Gone with the Wind is a repackaged disc from its 2009 release, as there’s no indication that this is a new transfer. Sound is stunning on all discs; each has been given a DTS-HD upgrade, which might seem superfluous for a monaural mix, but the difference is notable and worthwhile, especially on The Hunchback of Notre Dame, which has the most complex sound design of the lot.

Warner Bros. is fond of supplementing their features with an assortment of supplements that usually include a short, a cartoon, and a newsreel, termed a “Warner Night at the Movies.” That’s the case here, as six short films, six cartoons, two newsreels, and a handful of trailers—all from 1939—are scattered throughout the discs. The result is an overwhelming bounty of materials, almost enough to structure a college course around. Several of the cartoons and shorts are making their debuts on home video, lending this set even more urgency. The supplemental materials are less exciting, but still worthwhile and plentiful; most notable is a feature-length documentary titled “Warner Bros. Home Entertainment Presents 1939: Hollywood’s Greatest Year,” narrated by Kenneth Branagh. The format is informative, if soporific, as a succession of talking heads put checkmarks next to a grocery list of 1939 features, with clips to supplement. More akin to an AFI countdown than a critical perspective, the documentary is mainly useful for its listing of titles to see.

Dark Victory receives the most critical context; there’s a featurette that discusses the film’s contemporary relevance and a feature-length commentary by film historian James Ursini and CNN film critic Paul Clinton that points out, in particular, the way the film depicts physical illness. The pair also sprinkle trivia and tidbits about the cast, including juicy gossip information about the personal relationship between Bette Davis and Joan Crawford, but they’re prone to dropping out and letting the film play without comment a bit too frequently. Dodge City gets some attention as well, with an introduction by critic Leonard Maltin and a brief featurette about Errol Flynn. An interview with Maureen O’Hara rounds out the impressive assortment of extras.

As one scholar says in the accompanying documentary, “You could spend a lifetime studying 1939.” If that sounds like a viable prospect, this outstanding and carefully composed collection of Blu-rays from Warner Bros. Home Entertainment is an excellent starting point.