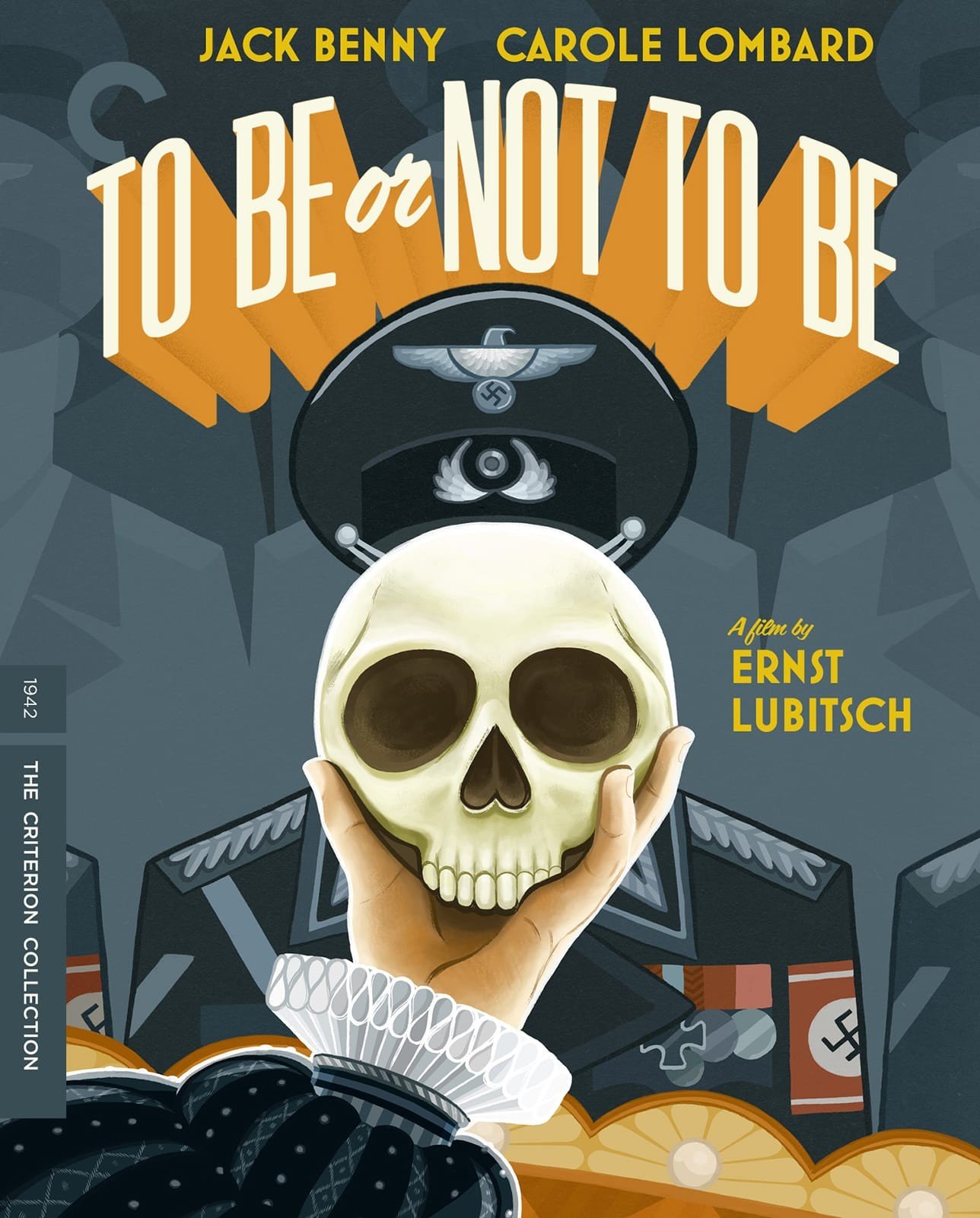 It’s not fair to judge too harshly the war-conscious films Hollywood made before Allied forces defeated the Nazis and revealed, for all the world never to forget, the depth and breadth of the Holocaust. Certainly, entertainments like Carol Reed’s Night Train to Munich and Leo McCarey’s Once Upon a Honeymoon would have taken drastically different forms, especially in their perception of concentration camps, had they been produced after 1944, rather than in 1940 and 1942, respectively. One can speculate, too, that Hollywood’s newfound sobriety, after George Stevens returned with footage from Duben and Dachau, would have made a film like Ernst Lubitsch’s To Be or Not to Be inconceivable. Lubitsch’s film, which pokes fun at Hitler and his sycophantic followers when it doesn’t arrange them to serve as villains in a thrilling espionage yarn, simply cannot answer the unanswerable, could not be made to try, and, thus, winks out of existence in a speculative, postwar Hollywood scene. Nevertheless, the alchemical miracle Lubitsch performed in 1942 is scarcely due to our beneficial vantage point, knowing now what he could not have known then. A Jew himself, Lubitsch drew on several millennia of persecution and intolerance; To Be or Not to Be, in conjunction with its farcical components, is enriched by an undercurrent of sorrows and lamentations, both for the history of his people, and the knowledge—cloudy, of course, as the evidence was still to come—of what was happening overseas.

If the result is a strange comedy where laughter often catches in the throat, as it does in Chaplin’s The Great Dictator, it’s only partly to be attributed to circumstances yet to come to light in the eyes of its makers. Its script adapted by Edwin Justus Mayer from a story by Melchior Lengyel, previous Lubitsch collaborators both, To Be or Not to Be is almost nothing without its bracing genre collisions, represented primarily by setting up Jack Benny to aid the Polish resistance, without for a second easing the throttle on the comedian’s trademark withered incredulity. Benny, by 1942 a known quantity as an entertainer and personality in radio and film, is expected to serve double duty as an indignant cuckold and an only slightly more pragmatic double agent behind enemy lines. If you can’t be certain where Lubitsch’s legendary sense of tact and delicacy fit into the film’s hybrid of backstage comedy and espionage thriller, observe the seamlessness with which Joseph Tura’s (Benny) lunkheaded pride as an actor and circumstantially betrayed husband dissolves into his ingenuity as a co-conspirator and strategist against several, often wiser Gestapo heavies.

Given a little familiarity with Lubitsch, the first-time viewer may not make it through To Be or Not to Be untroubled, so starkly does it stand against the demure-yet-barbed, saucy-yet-dignified comedies that otherwise spell his name in cinephilia. (On the other hand, fans of Inglourious Basterds will spot some third-act business to which Tarantino would later pay homage.) While leading man Joseph Tura struts and frets his hour, as only Jack Benny could strut and fret, the mechanics of that old chestnut, the “losers who win, in the face of overwhelming odds” plot, maneuver perfectly behind him at a relative whisper. The vignette that begins the film, concerning the ham, Bronski, who bristles at the notion that no serious audience will accept him as Hitler, paves the way for later scenes, in which one serious person after the next fails to accept him as anyone else. Lubitsch’s work often illustrates the lesson that people are only able to see what they absolutely need to see; rarely were the terms of these lessons more grave. While he may have intended merely to sing praises to the invisible hands and background players of the stage, his stern defiance of the fascist juggernaut, employing little more a string of delicately arranged theatrical conceits, could scarcely be more eloquent.

While there may be no lavish gowns or tastefully appointed villas on display in Ernst Lubitsch’s troubled Warsaw, just you try and catch sight of an un-coiffed lock of hair or a rumpled trench coat; if anything, history’s kitschiest monsters are prime inspiration for Lubitsch, who pits a comic ruse with long odds against a fascist war machine that won’t forgive a mistake. In a comedy that manages both to exalt and deflate theatrical contrivance, appearance is everything. With that in mind, Criterion’s crisp handling of To Be or Not to Be, photographed by the legendary Rudolph Maté, who lensed for Dreyer, Lang, and Hitchcock, isn’t an achievement to be shrugged off. The tale takes the “Lubitsch touch” through a dozen varied landscapes, some more hostile to his preferred mode of refined address than others, but, as Criterion’s seemingly effortless technical mastery will attest, all of it appears to have been gathered onto one, serenely lit mental stage. The uncompressed monaural soundtrack is equally up to the task.

Praise is due Criterion’s editors for the disc’s commentary track, authored and spoken by historian David Kalat, though the his walkthrough yields few surprises, well-read though he may be. Perhaps it’s a mistake to let anyone take you on something as vulgar as a tour of a master as subtle and delicate as Lubitsch? The notion is challenged by the 52-minute documentary, “Lubitsch le Patron,” written by N.T. Binh, who grounds future values such as appearance, precision, and material integrity to Lubitsch’s familial background: Well-known as it may be that his father was a tailor (the doc interweaves fabricated shots of a man being measured and a suit being cut), it’s also observed that his family was as much classed as immigrants in Berlin (as Russians) as Lubitsch would be in Hollywood (as a German). Better than Kalat’s flash-cards approach to the mystery of Lubitsch, whose multiplicity of layers may yet reveal no definite boundaries, “Lubitsch le Patron” benefits by restricting itself to clues, rather than conclusions.

For the enthusiast, taking respite from research into Lubitsch’s background and motives, a handful of supplements build an ensemble effect: a 1916 short, Pinkus’s Shoe Palace (in which he also starred), and two radio plays from The Screen Guild Theater, one featuring Jack Benny, Lubitsch, and Claudette Colbert, the other an adaptation of To Be or Not to Be starring William Powell, Diana Lewis, and the great Sig “So They Call Me Concentration Camp Erhardt” Ruman.

The definition of the term “screwball comedy” is so precise as to allow only a few entrants; among them, To Be or Not to Be stands tall as its irreverence and theatrical contrivance more than match the insensitive might of the Nazi war machine. Criterion’s well-produced Blu-ray release illustrates how Lubitsch aided the resistance, as only he could: with dignity, always dignity.