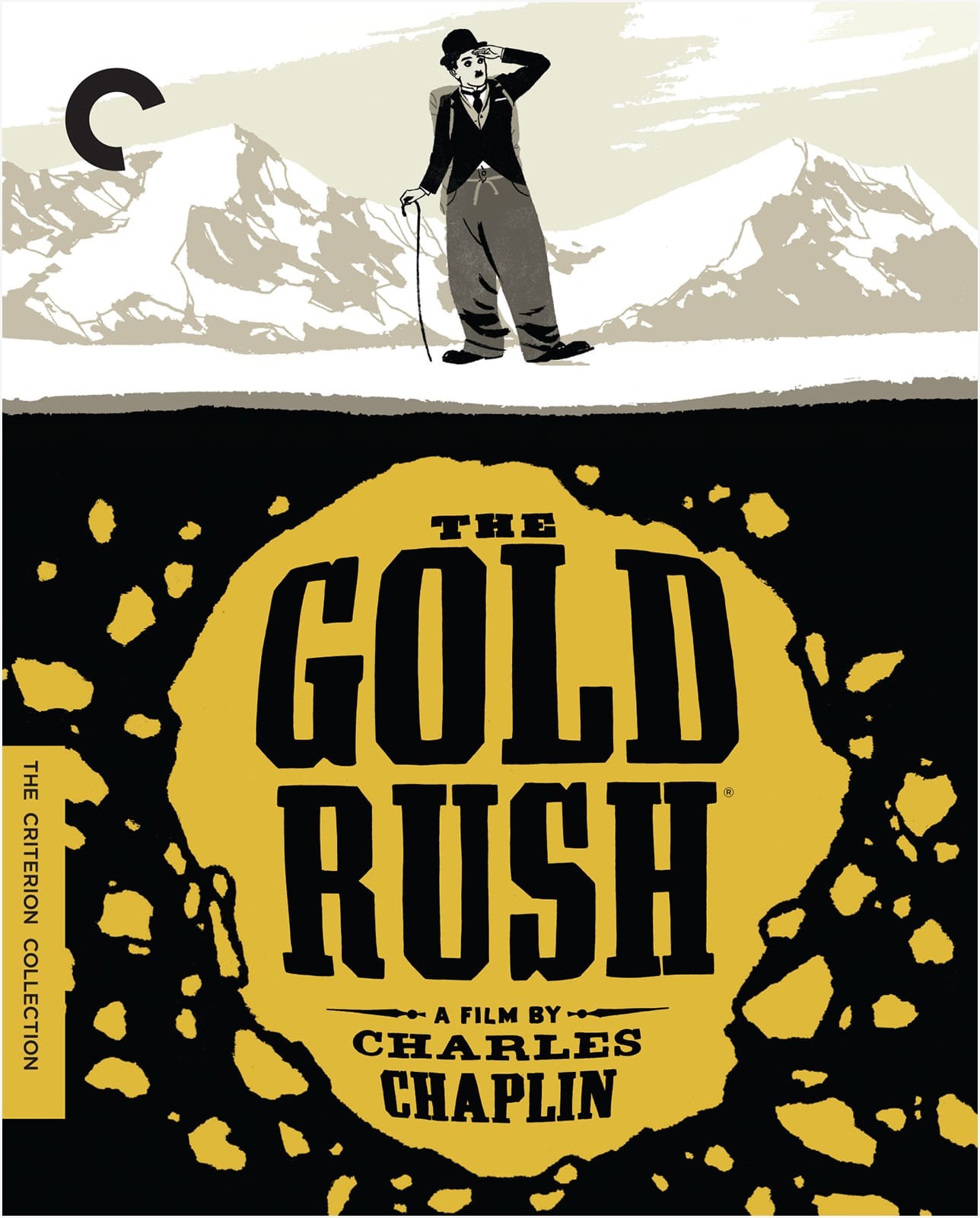 Though he’s still the best-known, most-studied filmmaker and star of the silent era nearly a century after his career began, is Charlie Chaplin’s level of craft and mastery of nuance still underestimated? In The Gold Rush (“A Dramatic Comedy” per a title card), Chaplin’s archetypal Tramp, here rechristened “A Lone Prospector” on the Alaskan tundra, enters the dance hall of a frontier town, weary from his labors and visually isolated from the revelers and floozies that fill most of the screen with a jubilant hubbub. We observe him hitching at his precarious, beltless trousers, and filching a drink from a passing tray. He fixates on a pixieish but iron-willed prostitute (Georgia Hale), retrieving a trashed photograph of her from the barroom floor, as he’s eyed by a passively sinister, plug-ugly miner.

Having once mistaken the girl’s beckoning to another for an invitation, he’s slower to believe when, out of pure spite toward a crude lover, she directly asks him to be her partner (“I’m very particular,” she hisses for the benefit of her jealous clod). And here Chaplin makes the meticulous exposition pay off as the couple waltz with minimal grace through the saloon, employing exquisite timing that seems preordained. The Prospector tips his derby at the grizzled miner, with characteristic striving for class; he repeatedly yanks up his pants with the inverted cane, never missing a step; and he finally improvises a rope belt, unknowingly from the leash of a dog, who soon spies a cat and sends the shabby hero sprawling. Before the Prospector can exit with a swagger, he must confront the alpha male (and incorrectly believe he’s knocked him out with one punch), but the dance alone is a perfect blending of character, slapstick, and mise-en-scène, a blissfully typical moment in this landmark film.

Since Hale’s “Monte Carlo girl” is mostly indifferent to the love of her courtly, impoverished swain, save for one pitying guilt-attack and the concluding scene, the Prospector’s passion is played for some sweet pathos rather than the tearjerking some of Chaplin’s saintly female characters inspired. The accent established in the first half hour is on comedic adventure—though it’s grounded, with the opening shots, in an epic tableau of an endless line of men trooping up a snowy mountainside. Removed from his usual urban setting’s ornery cops and curbside struggles, the transplanted Tramp’s life still revolves around food and its scarcity, when his stranded fellow cabin-mate (Mack Swain) mistakes him for a super-sized chicken, or the indelible sequence where Chaplin fussily seasons, serves, and munches on his boiled shoe for Thanksgiving dinner. Food only becomes an object of joy, rather than crisis, in the dream scene where the Prospector entertains the dance-hall girls with a sublime dance of dinner rolls. And in then cutting from an awakened Prospector facing the reality of an empty table, and a New Years sing-along of “Auld Lang Syne” that presents an affecting montage of sentiment-choked and keenly vulnerable faces, Chaplin presents a generous vision of human longing that endures as fully as the comic cliffhanger of a teetering cabin that serves as The Gold Rush’s climax.

Of course, the silent cinema, with a set of aesthetics and methods all its own, was dead within five years of the film’s release, though Chaplin stalled his entry into an all-dialogue milieu until 1940’s The Great Dictator. Two years later, wishing to make the out-of-circulation Gold Rush available to new audiences, he cut the intertitles, penned and recorded his own “descriptive dialogue” to replace them, and wrote a musical score, all to make his 17-year-old masterpiece commercially viable once again. It’s this version, reduced to 72 minutes from 88, that Chaplin called “definitive” (likely because there was now so much more of him in it), and because his estate persists in this claim, it’s so labeled on the sleeve of this Criterion Collection edition. Don’t believe it. While Chaplin’s narration isn’t as gassy as the worst of his talking-picture perorations, and he sometimes knew when to shut up and let a scene play, the spoken word adds nothing that can’t be gleaned from Kevin Brownlow and David Gill’s heroic restoration of the silent version. (Foreshadowing George Lucas: Chaplin also changed a plot detail to make hard-hearted Hale more of a softie, and altered the original ending by excising a kiss with her, perhaps to dismiss any remnant of his affair with the actress.) Play the restored 1925 cut, which is augmented with an adaptation of the fine 1942 score, and if you have kids, read the titles to them.

As a result of the decades-long scarcity of The Gold Rush’s 1925 cut following Chaplin’s withdrawal of it, there’s varying quality from scene to scene in the digital transfer of its 1993 reconstruction, but the clarity and brightness of the image is generally fine, and certainly a massive improvement from the cobbled-together public-domain prints that were exhibited and televised from the ’60s through the ’80s. Timothy Brock’s adaptation of the 1942 score, customized for the silent cut, sounds great, incorporating Chaplin’s melodies along with quotes of Brahms, Tchaikovsky, and “The Flight of the Bumblebee.” The monaural track of narration and music for the talkie release is more than adequate, and the well-preserved visuals are serviceable, but it hardly needs to be seen more than once when the mystery and splendor of the original is at hand.

The commentary track for the reconstructed 1925 silent version of The Gold Rush supplied by Chaplin biographer Jeffrey Vance is a tad fussy (he pronounces his T’s quite emphatically), but thoroughly covers the filmmaker’s unlikely inspiration from his childhood deprivation and the history of the Donner party’s cannibalism, the movie’s prolonged 17-month production, and the personal turmoil that threatened Chaplin’s very freedom when his original leading lady and paramour, 16-year-old Lita Grey, became pregnant. (He married her in Mexico, fudged the date of their son’s birth, and recast the part with Georgia Hale.) Vance’s defense of the 1942 sound version as an essentially “new film” that serves as “a fable” deemphasizing dark autobiographical elements in the original doesn’t quite persuade, given that the biggest casualty in the re-edit was Hale’s romance with the villainous bounder played by Malcolm Waite, but his view conforms to the idea that the artist always knows best, and perhaps represents the authorized view of Chaplin’s heirs.

The second disc is given over entirely to supplements, the first of which features Vance on the differences between the movie’s two editions, and archivist-filmmaker Kevin Brownlow on his 1993 restoration, with David Gill, of the 1925 original, luckily pieced together from a variety of sources after an initial period where, says Brownlow, “we had no footage.” “Chaplin Today: The Gold Rush” is a short 2002 TV documentary that examines the cultural legacy of the Lone Prospector’s saga, particularly in filmmaker Idrissa Ouédraogo’s testimony of his lifelong love for it, and an engaging scene of children laughing at the Tramp in a Burkina Faso classroom.

The remaining extras emphasize different elements in the spectrum of Chaplin’s prodigious “hyphenate” talent. A featurette on the movie’s miniature sets, in-camera editing, and other technical achievements are analyzed by contemporary effects specialist Craig Barron, and archival audio clips of cinematographer Roland Totheroh, who assured his director that the Klondike could be built with wood (and tons of flour for snow) at the Chaplin Studios when location shooting in the Sierra Nevada proved daunting. Most enlightening of all is Music by Charlie Chaplin, in which conductor Timothy Brock describes the complexity of adapting the scores written by Chaplin for his movies (beginning with City Lights in 1931, and later releases of his earlier work), mostly for live orchestral accompaniment to screenings. (Brock is on target in highlighting how music in The Gold Rush score virtually acts as dialogue, rendering Charlie’s storyteller narration “superfluous.”)

The set is capped by four theatrical trailers, made for various re-releases in Britain, France, Germany, and the Netherlands, and a booklet featuring an essay by Luc Sante, who describes the film’s plot as “a stew of elements drawn from dime novels, Jack London, and nineteenth-century blood-and-thunder melodrama,” and James Agee’s 1942 review of the sound version for Time, in which he declares that the “craftsmanship of (Chaplin’s) effortless performance…is still high comedy.”

Even with its (likely dictated) propaganda on behalf of the now-superfluous 1942 edition, this set restores a high watermark in cinematic comedy to nearly full glory.

Blu-ray Review: Charlie Chaplin’s The Circus on the Criterion Collection

Review: The Sailor Who Fell from Grace with the Sea on Shout! Factory Blu-ray