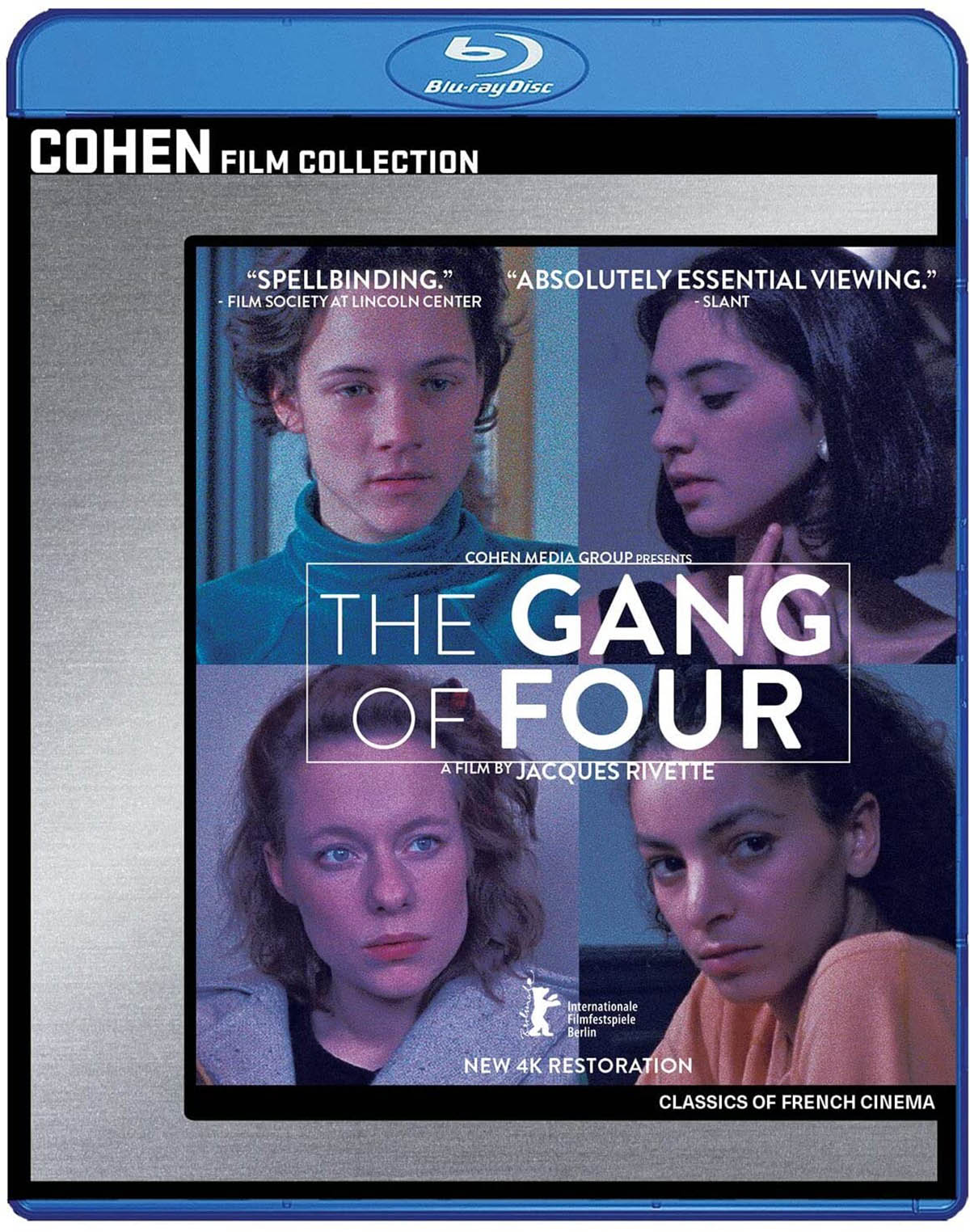 Throughout the late 1960s and ’70s, Jacques Rivette increasingly treated those in front of his camera as collaborators. The French critic cum filmmaker’s work already leaned toward improvisation, but he was depending more on the happy accidents that occur during the filmmaking process. Perhaps uncoincidentally, 1989’s The Gang of Four marked the start of a critical resurgence after a decade in the wilderness. The film grabs the baton of his earlier work and takes things one step further. Here, Rivette examines how actors can rebel against other actors, rejecting doctrinaire notions of their craft to bring their own truth and vision to the work at hand.

The Gang of Four is chiefly set among a small troupe of theater students in Paris, under the tutelage of a retired actress named Constance (Bulle Ogier), who has nary a kind word to say about the four young women in her class as they work through monologues and simple one-on-one dialogue scenes. Constance’s overbearing instructions and cutting evaluations contribute to a standard of acting that no one, perhaps not even herself, can meet. Constance may tear down her students, but the camera is consistently enraptured by even the most error-laden rehearsal, pulling out to master shots of the stage and gradually moving closer with eagerness as each aspiring actress gets deeper into their dialogue, which makes Constance’s intrusions and calls to stop that much more galling.

Much of the film’s early going simply regards the lives of its characters, especially the four students who share a cheap flat out in the suburbs: Anna (Fejria Deliba), Claude (Laurence Côte), Joyce (Bernadette Giraud), and Lucia (Inês de Medeiros), the latter of whom has just replaced the other three’s friend and classmate, Cécile (Nathalie Richard). All of these women come across as self-assured in their private behavior and well-aware that Constance’s classes are unlikely to advance their careers, yet one senses a kind of Stockholm syndrome in their view of the teacher in the way that their creative passion leaves them susceptible to manipulation.

That vulnerability also plays into the secondary plot involving mysterious man who goes by several names but most frequently Thomas (Benoît Régent) and claims to be some sort of agent who’s investigating Cécile. Warm pastel tones dominate The Gang of Four, but Thomas’s scenes abound in shadowy cinematography that rush the characters into a paranoid thriller. This mix of styles is textbook Rivette, but here that mélange’s subtext is more pointed than usual given the similarities between Thomas and Constance in their behaviors. It’s one thing for Constance to use her experience and success to lord over a group of actresses, but quite another for this strange, threatening man to cajole and deceive them. In a cruel mockery of James Bond-grade spy fiction, Thomas even sleeps with one of the women for information—and that the woman is Claude, who expresses doubts over her sexual identity throughout, is especially repellent.

As is Rivette’s wont, the film slowly bridges the two narratives, here by focusing on the way that everyone is an actor to some extent and we all make our way in life as an extended performance. For all his callousness, Thomas is playing a kind of game not unlike the acting exercises that the women perform in class, and overcoming his machinations ultimately gives them the confidence to assert themselves against Constance’s rigid notions of acting. Contrary to something like method acting, of a performer digging entirely into the lived reality of a character, The Gang of Four sees the art as reliant on the personal lives and hang-ups that an actor might subconsciously bring to a part, allowing something that exists only on a page to come alive in ways that even the original writer could not predict.

Sourced from a 4K restoration, this disc’s transfer perfectly captures the elegance of Caroline Champetier’s lensing. The bright daytime scenes really show off the subtle gradations of greens and blues alongside the occasional pop of primary reds and yellows, while the noirish after-dark interactions between the characters present the heavy shadows with no crushing artifacts. The soundtrack cleanly balances the emphasis on dialogue with ample ambient noise.

Cohen Media Group’s disc comes with a terrific commentary track by film scholar and former New York Film Festival program director Richard Peña, who extensively breaks down The Gang of Four’s themes and how both Jacques Rivette’s direction and the actors’ performances elucidate them. Peña rarely pauses, pointing out subtle aesthetic touches and Rivette’s many complications of narrative and continuity expectations, while drawing on a rich set of references to art and philosophical texts that only compound the film’s depth.

Cohen Media Group resumes its indispensable Jacques Rivette reissue series with a beautiful transfer of one of the director’s most beguiling works.