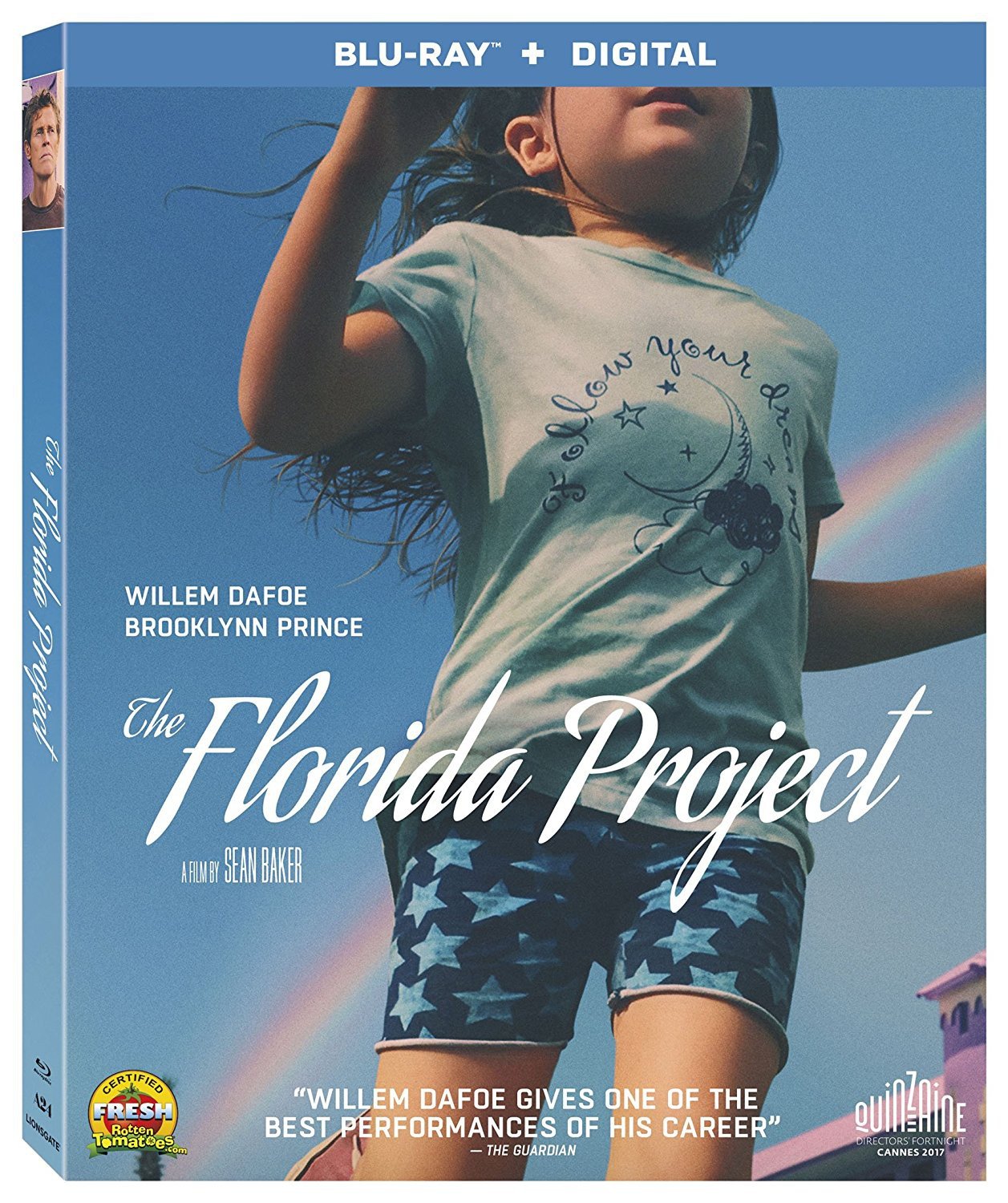 Every morning after the sun has risen above the Magic Castle, a purple-colored budget motel that’s near the Magic Kingdom and above which clouds resemble dollops of cotton candy, Moonee (Brooklynn Prince) gets to work. It’s summer and school’s out, prime time for a six-year-old who’s in the business of playtime, from her and her friends sharing jokes under stairwells to chasing after a pot of gold that they pretend exists at a rainbow’s end. Like all kids, Moonee lacks the foresight to follow her more mischievous actions to their logical conclusions, and in the world of Sean Baker’s The Florida Project, such oversights have unpredictable effects on the currency of friendship.

The film opens with Moonee and Scooty (Christopher Rivera) spitting on a car from a nearby motel’s second floor, and after being forced to clean up the vehicle, this band of misfits gains a new member, Jancey (Valeria Cotto). But later, after the trio accidentally sets fire to an abandoned condo, Scooty’s mother, Ashley (Mela Murder), no longer allows her son to play with Moonee. This is a small tragedy that Moonee’s mother, Halley (Bria Vinaite), is actually responsible for—a fact that neither Moonee nor Halley will ever know, or pretend to know, because underlying so much of the anecdotal events of this film is a sense of people, for sanity’s sake, needing to often trade in denial.

Baker spends much of The Florida Project charging in vigorously nimble fashion up and down the stairs of the Magic Castle, in and out of its rooms, investing the minutia of the down-and-out lives within this little ecosystem with a bittersweet energy and significance. For much of the film, calamity is never harsher than a father packing up to move to New Orleans and forcing his son to leave his toys, relics of memories, behind with the friends he’ll never see again. And almost always the camera is yoked to Moonee’s present-tense point of view, which explains why the forces battering these lives from all sides remain largely outside the film’s purview: They’re not only too big for this little girl to both completely imagine and understand, but it’s outside her field of vision where the film’s adults are content to keep these forces.

One take on the project of the film’s title is the unspoken social contract that binds these lives: the understanding that they’re in this life together, united in their love for their kids. The Magic Castle’s manager, Bobby (Willem Dafoe), spends much of The Florida Project fulfilling his contractually obligated duties while also empathetically taking on the extracurricular role of Father Goose. He breaks up skirmishes and repeatedly asks Halley for her rent, fake-begrudgingly granting her extensions. In one of film’s loveliest scenes, he moves his office chair back so Scooty and Jancey can hide from Moonee under his desk. And in one of its nerviest, he scares off an old man (Carl Bradfield) for hanging pervily around Moonee, her friends, and all the other children passing through the Magic Castle on their way to destinations unknown.

At one point, a man (Macon Blair) walks in on Moonee taking a bath, and just as he notices and acknowledges her existence, Halley pulls the man out of the bathroom. It’s telling how he’s unseen to us, and if Moonee knows why her mother is with him then you wouldn’t know it from her face—though when we do finally see the man, after he comes back to the motel demanding what Halley stole from him, you’ll know the nature of her work from the way Baker blocks the crisis between them that Bobby attempts to negotiate. Bobby looks away from Halley to the john and Halley instantly broadcasts her contempt for the man with her face and middle finger, and the scene’s slapstick-like construction attests to the filmmakers’ uncondescending look at Halley’s life.

Earlier, Moonee will ask her mother about why the security guard at a nearby resort tries to stop them from reselling wholesale perfumes to the tourists heading to and from the building. As she runs from the guard, Halley drops some of the boxes of perfume, which Moonee understands to be as precious a bounty as the free grub that the little girl picks up almost daily from the diner where Scooty’s mom works. But Halley doesn’t tell Moonee why she really left the boxes on the ground, because to do so would be to have to tell her little girl, and a little too soon, that she has to strive for more in life than recess—idle days of bugging strangers for ice cream money and spinning fantasies, as in Moonee and Jancey patiently waiting under a huge tree for the rain to pass and Moonee telling her friend that the cows in the distance are a gift to her.

It’s no accident that this scene recalls the opening of Post Tenebras Lux, as Carlos Reygadas’s film and The Florida Project are shot by Alexis Zabe and these scenes both evoke a child’s ritual of play as an innocent, almost holy form of tunnel vision. And throughout this film there’s always a subtle sense that Moonee will finally be forced to learn to see a little differently, probably when danger strikes in a way that can’t be held at bay by any adult. And until then, the film is so remarkable at synching its picturesque style to Moonee’s seemingly limitless freedom that the one time they do fall out of sync feels jarring, almost offensive: In long shot, Moonee and her friends charge past a series of stores and toward the promise of ice cream, and even after the children have exited the frame, the camera lingers on the sight of an obese person on a scooter riding in the other direction, the sound of the scooter going over a speed bump nothing more than a punchline, an easy potshot, at the expense of a person who isn’t even a bystander to Moonee’s life.

Some might argue that The Florida Project’s ending constitutes another such misstep, but that would be to misunderstand another of Baker’s fundamental projects. Joan Didion has written, and better than no one else, about Miami as a transient metropolis, one that’s been built in the image of so many Cuban cities, and one that seems like it will, if not exactly crumble, reveal its essential ephemerality when so many of its Cuban-born citizens feel like they finally have the license to return to their homeland. The same could be said of Orlando, a city which feels like it only exists in relationship to Disney World, a capitalist dependency that’s very much felt throughout this film. As lived-in and detail-rich as the lives in The Florida Project are, the environment where they’re rooted is fleeting, a place where one passes through but never stays.

It’s also telling how often the people who live at the Magic Castle spin stories around or simply give the finger to a symbol of all they can’t attain: a helicopter that repeatedly takes off nearby, probably from the resort outside which Halley sells her perfume and, unknown to Moonee, her body. Baker and co-writer Chris Bergoch understand the pull of Disney on young lives and they posit the Magic Castle as a temporary place, whose upkeep feels like a hard, desperate means to keep a dream alive for the young: a pit stop on the way to hanging out with Mickey Mouse. A bitter irony here is that, when the shit hits the fan and Moonee’s eyes open in ways they never have before, she makes a heartbreaking, last-ditch effort to run toward that dream, fulfilling something that her mother could never give her. But I’d like to think, given this girl’s precociousness, that she’s also hellbent on destroying this dream, if only to dream bigger: of a world not so small, after all, and as such not predicated on the self-containment that enables capitalism and turns us into its suckers.

Lionsgate Home Entertainment’s Blu-ray flawlessly transfers Alexis Zabe’s bright, humid cinematography to home video. The garish purple hues of the Magic Castle pulse with the absorbed heat of the humid Florida summer, as do the rich, hyperreal colors of Kissimmee’s other buildings, highlighting their tourist-trap intentions—how they use flash to lure customers like birds casting about for a mate. The transfer also preserves such details as the faded hues and permanent stains of the characters’ well-worn clothing, as well as the pale blue-green haze of the cheap fluorescent lighting inside the Magic Castle’s many rooms. A handful of shots recorded on film show brief instances of print scratches, but otherwise the image is pristine, no matter the shooting format of any given frame. Audio is equally impressive, as the 5.1 mix deftly weaves together the overlapping noises of the motel’s semi-communal life. The faint sounds of TV broadcasts coming from open doors, children playing around nearby picnic tables, and other ambience do as much to establish the specificity of the setting as the images, and these effects are as clear in the mix as the foregrounded dialogue.

A short making-of documentary eschews talking heads in favor of stitched-together footage of the production’s evolution from location scouting and rehearsals to the actual shoot. This fly-on-the-wall approach emphasizes minute elements of Sean Baker’s method, from feeding lines to Brooklynn Prince and Bria Vinaite, to the frustrations of dealing with ambient noise and unpredictable weather. There are also interviews with cast and crew discussing the film, with particular highlights being Prince and Valeria Cotto describing their roles with surprising intelligence and Baker talking about honing the script so realistically that actual people he met in the area would tell him stories about their lives that eerily synchronized with his own fictional inventions. The disc also comes with a brief blooper reel.

Sean Baker’s latest triumph of honest but warmly sentimental, observational cinema remains one of the highlights of 2017, and it looks just as beautiful on home video as it does on a big screen.

Review: George A. Romero’s Night of the Living Dead on Criterion Blu-ray