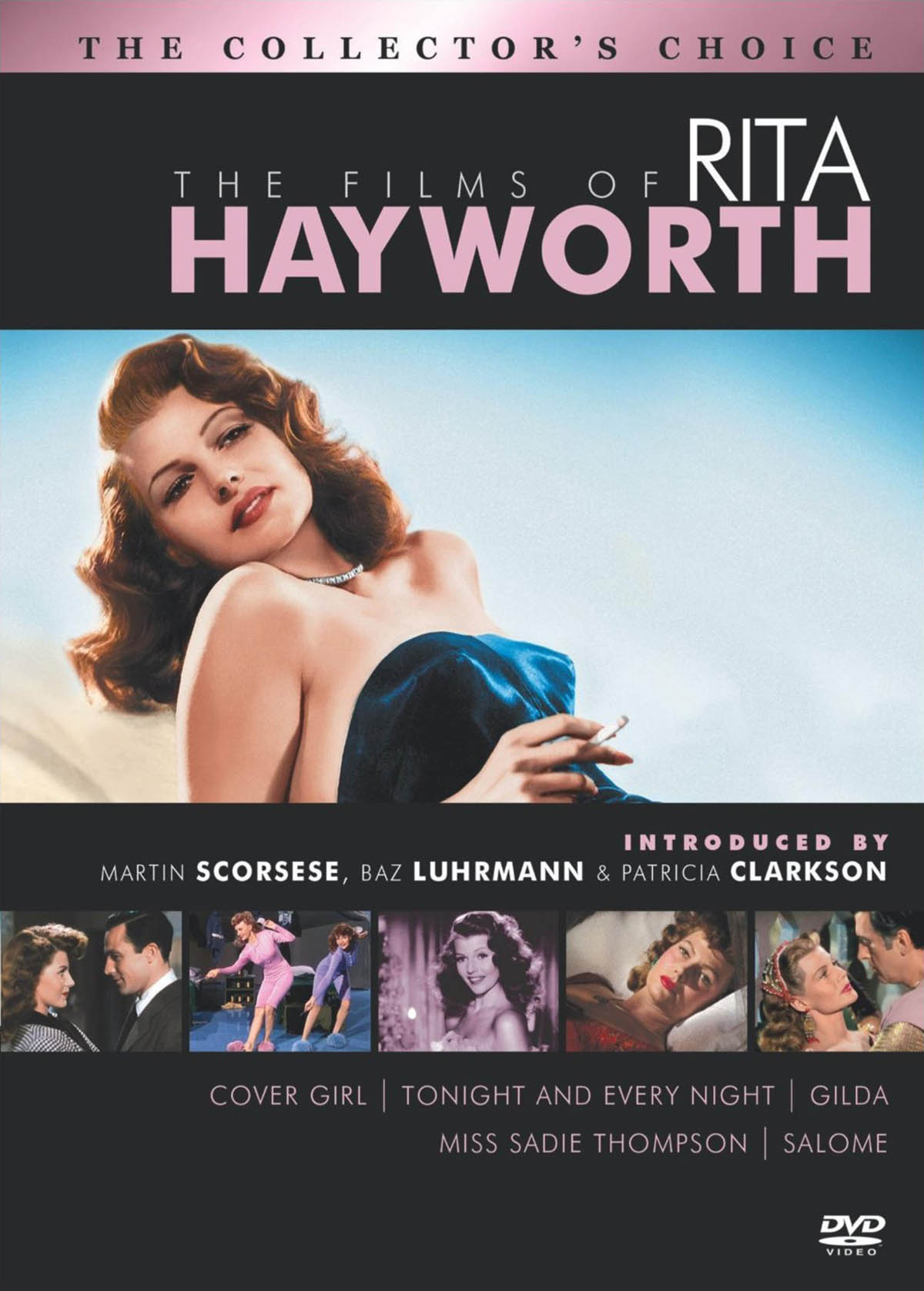 When people think of Rita Hayworth, it’s often as a pin-up queen first and as an actress second. Her iconically vampish eponymous role in Charles Vidor’s Gilda came five years after she posed for Life magazine in a series of, ahem, rousing photos that saw her lying on a bed in a negligee with a lacy bustier and satin bodice. So, if anything, by the time she made her famous striptease in Gilda, she was already playing to her audience’s gutter-level expectations. The film’s infamous “Put the Blame on Mame” striptease is a perfect introduction to the star as sex bomb, even more so than the way her character is introduced to the audience when she flings herself into view, ornately coiffed hairdo first, and coyly laughs, “Me?,” in response to her sugar daddy (George Macready) when he asks, “Gilda, are you decent?” The sheer appearance of sex reigns supreme over Vidor’s archetypal noir. So it stands to reason that Hayworth’s notorious dance number is the most memorable thing about it. She teasingly sloughs off one elbow-length glove from her right arm, musses up her hair with both hands, and bends over every so often to show off her ample cleavage. And did I mention that her satin sheath Jean Louis dress is shoulder-less? Hubba hubba.

Gilda’s banter defines its tangled, mostly superficial love/hate ménage a trios between Hayworth’s petulant titular plaything (“If I was a ranch, they’dve named me the Bar Nuthin’”), Macready’s distant and vindictive jilted lover Ballin (“Women are funny little creatures…odd things are important to them”), and Glenn Ford’s baby-faced protégé/other man Johnny (“Pardon me, but your husband is showing”). Ballin loves her and she loves him until Johnny steps in and she instantly hates Johnny for threatening to take Ballin away from her. So Johnny hates her right back for making him covet his neighbor’s wife. They glare at each other for the vast majority of the movie, exchanging barbed jousts now and again (“Where’s your bathing suit,” Johnny asks Gilda, to which she replies, “Under this. Want to see?”). And eventually, Johnny and Gilda consummate their mutual dislike with a kiss. Which means either Ballin or Johnny has to go (“Haven’t you ever heard of such a thing as justifiable homicide,” a detective asks Johnny rhetorically).

That image of Hayworth as sultry femme fatale is downright irresistible, but it’s also one that she was determined not to be trapped by. A major draw for Columbia Studios, she tried to establish herself as a performer of many talents in films like Vidor’s Cover Girl and Victor Saville’s Tonight and Every Night. Both are musicals set and produced during WWII that showcased Hayworth’s ability to sing, dance, and, in general, look more animated than any magazine spread could. Which is funny because while the pageantry of Tonight and Every Night’s set pieces do manage to make Hayworth look somewhat versatile, both it and Cover Girl desperately try to soften her fictional persona as a preening, vain Jezebel.

As a vehicle for Hayworth, Cover Girl is the more perplexing of the two titles. It operates under the gung-ho work ethic and team-spirit-above-all-else attitude of co-star Gene Kelly. By film’s end, Hayworth is effectively put in her place and forced her to be a good little team player instead of the radiant star she was. At one point in the film, she’s even told point-blank by a group of modeling agents that acting isn’t her strong suit and that she should just stick to posing silently.

Tonight and Every Night is at least more elegant in its “the show must go on” ethos: As a stagehand says at the film’s end, “One [performer] steps out, another steps in. That’s the way it is, civilian or soldier”. It also doesn’t try to tame Hayworth’s image as much as Cover Girl does: “The Boy I Left Behind,” a salute to British troops away at war, is especially unabashed in the way it sells its star’s unique sex appeal. Clad in baby-pink and blue pajama one-pieces, Hayworth and co-star Janet Blair both coo about how the British military “can’t regulate a girl’s sensations,” but only Hayworth is broadcasting with her body language what that cheeky line evokes. While Blair yawns comically, Hayworth pinches her one-piece suggestively, just a couple of inches below her bust, right around the middle of her hourglass figure. The gesture is enough to make one believe that Saville, a savvy actors’ director, could accomplish what Hayworth nonsensically says to reassure Marc Platt’s strictly platonic, always nervous male dance partner: “We’re going to teach you everything you know.”

While Hayworth’s charms would hardly burn out in the years to come, her beauty did already mellow somewhat in 1950s vehicles like Miss Sadie Thompson and Salome. Ironically, her roles in both of those films ineffectually seek to heighten Hayworth’s image as a sex symbol even after her looks were no longer as smoldering or just flat-out jaw-dropping as they were in Gilda. By the early ’50s, she had developed into a more mature kind of beauty, making filmmakers’ increased attempts to make her look like a comely Venus fly-trap with breasts that much more unflattering. Both Miss Sadie Thompson and Salome remind us that Hayworth’s greatest strength was always just looking like a gorgeous harpy.

Miss Sadie Thompson, the fourth film adaptation of W. Somerset Maugham’s story “Miss Thompson,” is the more limp of the two failed vanity projects. Originally theatrically released in 3D, the film follows Hayworth’s Thompson, a fallen woman that bewitches an island of U.S. Marines, including a young Charles Bronson and Aldo Ray. Deranged pastor Alfred Davidson (Jose Ferrer, of course) declares, “I know the look of immorality when I see it,” and insists on chasing her off the island with her demonic tail tucked between her legs. Thompson does eventually accept that she is a sinning heathen and breaks down sobbing in a jaundiced crying jag, her hands looking like arthritic claws as they rub at her eyes awkwardly so we don’t have to see Hayworth as she mouths her boo-hoo-hoo’s. The film’s use of 3D is pretty pointless, as there are no acrobatically salacious sex acts in the film. The highlight of the film is however purely physical, specifically a close-up of a drowsy-looking Hayworth waking up to God’s good word as Ferrer recites the 23rd Psalm to her.

Salome is an equally tedious and thematically muddled work. In this version of the bibilical parable, Salome’s mother, Herodias (Judith Anderson), wearing a pair of obscenely large earrings and a dress with giant sequin rose petals covering her bust, is really the reason why John the Baptist (Alan Badel) was murdered, not her snooty but relatively chaste daughter (Hayworth, natch). Worse still, Hayworth, a lightning rod for heterosexual male viewers’ attention, is conspicuously absent for most of the film, only appearing in a handful of key scenes.

Hayworth’s version of Salome is a monumental screw-up as it mostly downplays its story’s central physicality (this is, after all, an overloaded allegory mostly remembered for its climactic belly dance and subsequent beheading). And in director William Dieterle’s hands, it’s also probably the gayest film Hayworth ever starred in. A telling exchange between an exhausted male slave and Commander Claudius (Stewart Granger), Salome’s love interest, is the film’s most corporeally fixated scene. As Claudius gives succor to the parched, half-naked man, Pontius Pilate sneaks up behind him and cattily whispers, “I wish you were as concerned with my comfort, Commander.” The film’s inept and laughably choreographed version of Salome’s Dance of the Seven Veils is fatally kitschy: Hayworth must be wearing at least a dozen veils, and all of them look like they were ripped out of the sleeves of a third-rate conjuror. Charles Laughton’s King Herod is equally absurd, flicking his wrist theatrically when he accuses John of heresy. And all the while Hayworth disappears more and more into the film’s background, making her big dance number, where she’s gyrating wildly like an out-of-control top for Laughton as his eyes bulge and licks his lips, a last-ditch bid for attention.

The image quality of the five films in The Films of Rita Hayworth varies wildly. Gilda was restored by Martin Scorsese’s the Film Foundation and looks gorgeous in its new grain-free transfer. Other films, especially Tonight and Every Night and Miss Sadie Thompson, look terrible. A wavering, pastel-centric palette running throughout both films suggests that some slapdash attempt at color correcting was made, but both films look pretty blotchy and grainy at times. The films’ mono audio tracks aren’t dazzling but they’re all perfectly serviceable, free of noticeable pops and hisses across the board.

The few special features are only fitfully entertaining. Watching Baz Luhrmann excitedly talk about Hayworth’s charms and how it influenced his own films is mostly narcissistic, but sometimes fascinating when it revolves around personal anecdotes of his films (I especially like when he talks about how he found out the hard way about how elaborate Hayworth’s hairdos were). Patricia Clarkson’s introductions are perfectly fine but mostly dull and Martin Scorsese’s few words on Gilda are mostly just academic (his slow, deliberate delivery shows you that he’s in serious professor mode, which is weirdly not preferable to when he’s in ebullient cinephile mode). Film historian Richard Schickel’s commentary track on Gilda is pretty informative and well worth a listen if you’re looking for some context for the film, but other than that, the set’s supplementary features are negligible.

Sony’s new Hayworth-centric box set runs the gamut of the pin-up queen’s charms and is well worth a look if only to see the newly restored Gilda.