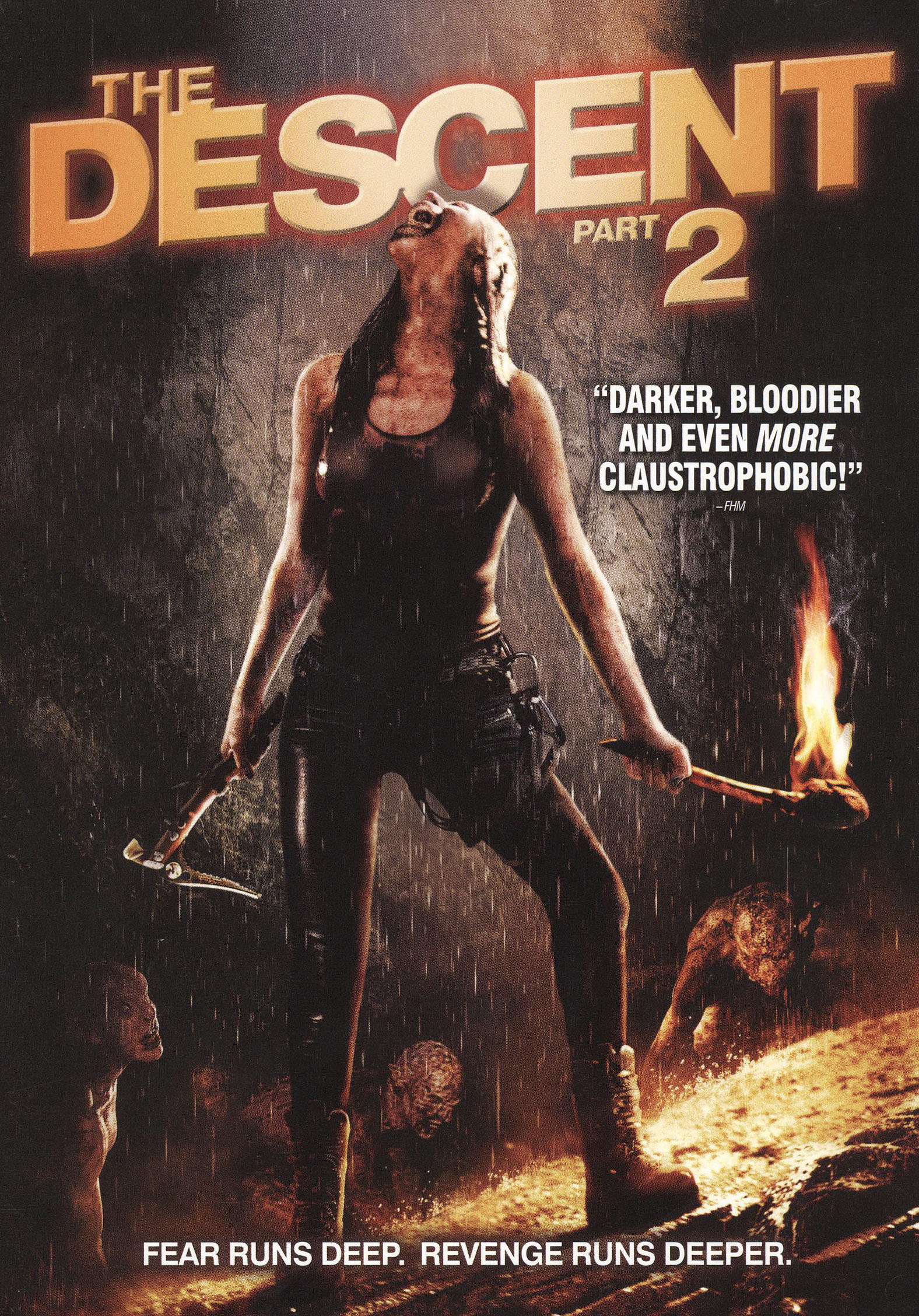 On its own, The Descent: Part 2 is a forgettable, inoffensive cave-monster movie; unfortunately, it’s a follow-up to one of the horror genre’s most pleasant surprises of the last decade. The new picture opens only a few minutes after the first concluded, but we can immediately tell that we’re in a different and considerably less rewarding place. This one is stripped of the qualities that made The Descent a memorable, surprisingly confident, pleasurable exercise: a relatively convincing, detailed portrait of climbing and spelunking; imaginative, canny, claustrophobic use of nearly total darkness; a refreshingly simple monster; and performances that were tough and pared of any pointless histrionics. There’s even a little subtext if you want it: The brutal, well-edited, and intense attacks have rape connotations, and the cast slowly splinters, not only from the beasties, but from a past infidelity that haunts them. The Descent is a battle-of- the-sexes picture with an all-female cast—a clever achievement on the part of the talented writer-director Neil Marshall.

The Descent: Part 2, directed by the first film’s editor, Jon Harris, never recovers from a too-absurd scenario. Sarah (Shauna McDonald), seemingly minutes after hospitalization following her escape from the bloodbath of the first film, is essentially kidnapped by small-town law and forced to return to the uncharted caves in the hope of retrieving Sarah’s friends, particularly one, Juno (Natalie Mendoza), with government connections. Sarah, of course, has amnesia (if she didn’t, she might warn them, i.e. there’d be no movie) and, of course, slowly rallies and takes charge as the new gang faces the monsters for, in her case, the second time in roughly 40 hours. One wants to applaud the picture’s creators for diverging from the “different group of unsuspecting people, same menace” structure that’s common to the horror sequel, but this alternative makes a compelling case for unoriginality (and the direct continuation shtick ultimately makes little difference anyway, as it is still “same monsters, more people”).

Watching the sequel, you realize how much Marshall did with so little. This picture is poorly acted by everyone, including returnees who were effective in the first film; the editing is surprisingly slack (particularly considering the director’s background); the monsters are silly and, worse, revealed entirely by notably lame, spacious, over-lit soundstage caves; and you can read every fake scare several seconds before it’s meant to be telegraphed. The Descent: Part 2 is recommended for two parties: those curious folk who like to split a six-pack and chuckle at bad movies, and those who left the first picture clamoring to know more about the creatures’ defecation habits. Others will find the picture a little sad.

The sound mix is immersive and subtle, and the only reason anyone will potentially jump watching this movie. The image is too bright, killing the suspense to be had from watching people trapped underground. It’s difficult to tell if this lighting is intentional or not, as director Jon Harris occasionally alludes to problems with prints being too bright in the audio commentary. Regardless, the image shortchanges the movie.

The audio commentary by director Jon Harris and actresses Shauna Macdonald, Krysten Cummings, and Anna Skellern is fun and anecdotal, if also unexceptional. Harris offers a few thoughts that seem to point toward a more ambitious sequel, particularly subtler scares (he apologetically, and correctly, refers to a number of moments as “broad”), and a longer beginning that spends more time getting the characters underground. Harris seems conflicted: He speaks of the need to take time with characters one moment, and of the importance of keeping things moving the next. This unsure, contradictory sensibility hangs over the final product, which might be a victim of that traditional argument of mass-appeal (money) versus something stranger and quieter (quality, but less money). But money, of course, is ultimately the only reason Descent: Part 2 exists anyway.

One could be forgiven for assuming that Harris is using the claims of cut footage and dwarfed intentions (common director scapegoats) to justify a picture he’s unsatisfied with, except that the deleted scenes seem to confirm this. An alternate beginning, in which we hear the voice messages of the original doomed travelers, is a succinct, logical recap that’s also scarier than anything in the actual movie. A nightmare scene, an extension of a similar moment in the first picture, also makes sense, and establishes the survivor guilt that’s laughably haphazard in the official cut (this footage allows our heroine more than 10 on-screen seconds of bed rest, and affords the creators another reference to Aliens—a film that has significantly influenced both Descent movies). Other various trimmed bits, primarily of people stuck in tight places, also seem to catch a little of the cramped eeriness of the earlier film. The other extras are typical: There are the requisite storyboards and trailer, and the making-of doc is a puff piece.

Another forgettable sequel to a surprisingly successful horror picture.

DVD Review: Ang Lee’s Ride with the Devil on the Criterion Collection