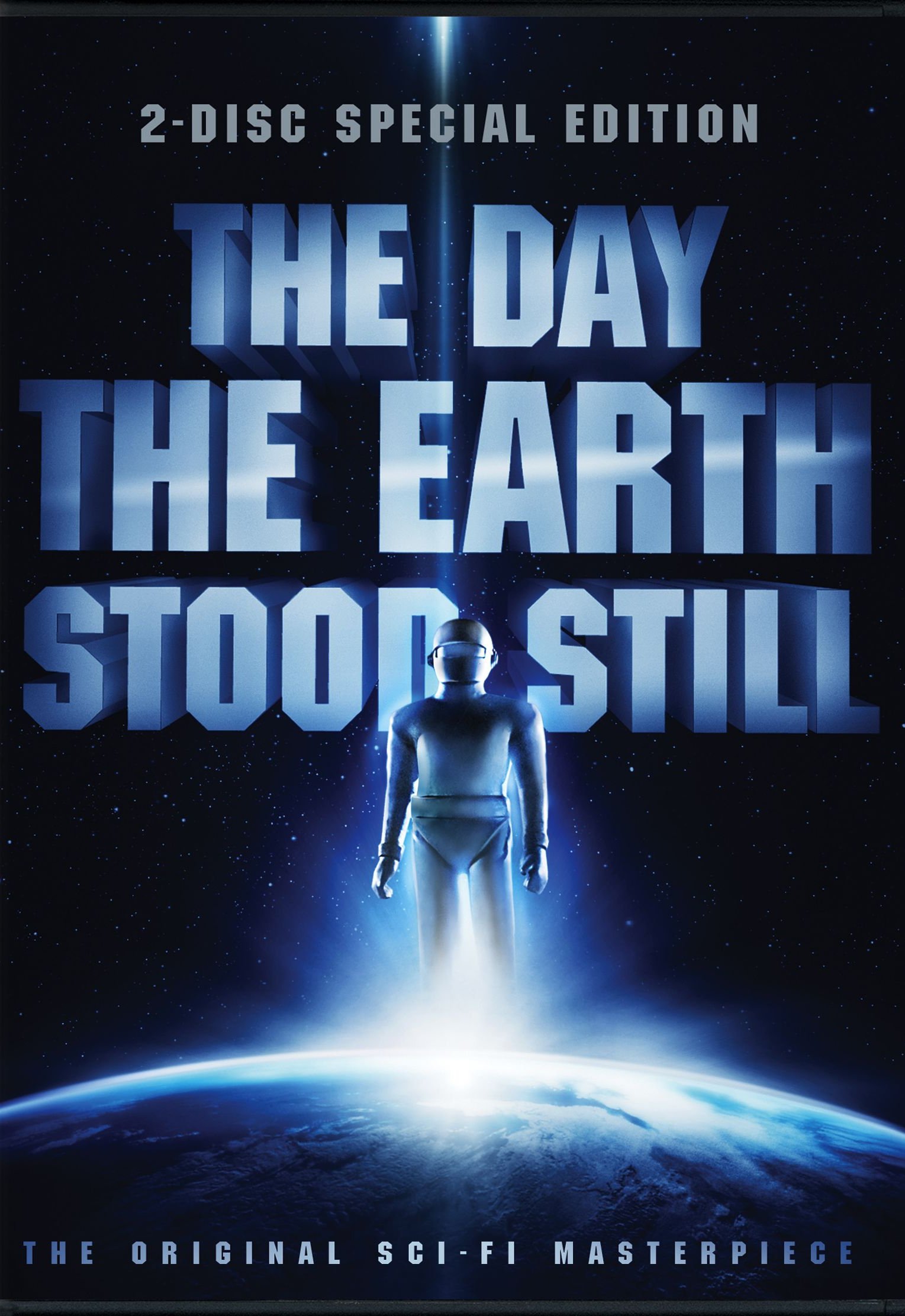 The quintessential alien visitation tale of its era, The Day the Earth Stood Still was mythically embedded in the minds of the pre-Spielberg generation that first saw it in childhood; viewed now, its influence on subsequent genre variations is as difficult to overstate as its number of ludicrous imitators. If not the first science-fiction film made by a Hollywood studio for adults (a distinction Kubrick always claimed for his 2001), it marked a leap past bug-eyed-monster serial juvenilia and attempted to defuse Cold War paranoia via anti-authoritarian wit and somber reckoning with Atomic Age danger. It’s a thinking kid’s movie, yet its crafty fun stays in balance with its self-consciousness as a prestige message picture.

Iconic from the get-go (the first line of dialogue is “Call headquarters!”), Day begins with a shimmering saucer hovering over the monuments of Washington, landing on the Ellipse to disgorge interstellar ambassador Klaatu (the angular, authoritatively British Michael Rennie). Surrounded by Army units, he is immediately wounded in the arm by a trigger-happy soldier, and his giant robocop companion Gort defensively vaporizes a tank and a couple of rocket launchers. When his efforts to organize a summit of all Earth’s nations are halted by geopolitical stalemates, Klaatu escapes a hospital room to observe Terran habits undercover in a D.C. boarding house, where he gradually confides in sharp but vulnerable war widow Helen Benson (Patricia Neal) and her spunky son (Billy Gray). After the alien reaches out to an Einstein-like professor (Sam Jaffe) to aid him in assembling the world’s scientists to hear his warning to the human race and engineers an eerie global demonstration of power, the authorities tighten the dragnet and the visitor must rely on Gort and Helen to save his life and mission. (Neal gets to unleash one damsel-worthy scream before delivering an order to the metallic sentry that’s the movie’s most enduring line.)

Released in the midst of the Korean War and the prime of McCarthy, the film achieved a unique relevance for a “spaceman” movie by unambiguously advocating for peace and grounding its pulp story in social reality. Beside the then-state-of-the-art effects and an indispensable, theremin-laced score by Bernard Herrmann, director Robert Wise and screenwriter Edmund North establish the anxiety and xenophobia of a Soviet-fearing populace as easily transferred to the messianic Klaatu (whose pseudonym is the Christian-tinged “Mr. Carpenter”). A frumpy boarder suspects the space traveler is actually a Red spy; the widow’s fatuous insurance-salesman suitor (Hugh Marlowe) asks, “What do you know about him?” as a preamble to envisioning himself as the richly rewarded captor of “the monster.” And the highly evolved Klaatu’s stern ultimatum isn’t bleeding-heart idealism but falls within the parameters of ‘50s statecraft: “Stop fighting or we’ll destroy you” fits Truman-style containment policy without many contortions. Despite the centrality of this severe admonition to the plot, Day’s capacity to entertain is still carried by its stylish visual assurance, Rennie and Neal’s touching faith in each other, and a boy’s pleasure in buying otherworldly gemstones from a “screwball” adult for $2. And Gort remains an awesomely cool robot.

Both Robert Wise and his cinematographer Leo Tover were genre hoppers, but their experience in noirish thrillers shows in The Day the Earth Stood Still’s nocturnal chase and suspense scenes, and in Rennie’s confession to Neal in a shadowy stalled elevator, all crisply rendered here in rich gradations of gray and black. The new surround sound mix is a perk that benefits Bernard Herrmann’s landmark score and its use of dual (high and low) Theremins; from the first moment of the opening titles, it’s the musical essence of ‘50s sci-fi film.

Quite a trove. Retained from Fox’s previous single-disc edition is a commentary/conversation between Wise, who died in 2005, and sci-fi auteur Nicholas Meyer (who made two Star Trek films to Wise’s one). Wise denies he was aware of Klaatu-Christ parallels during production and explains his emphasis on “everyday reality” to anchor the fantastic, while Meyer exults in the expressively thoughtful faces of the lead actors and praises the spare, character-driven framing and editing with, “This is all so simple.” The second commentary track features a quartet of scholars, including Herrmann biographer Steven Smith, who discuss the film’s countering of the 1951’s militaristic zeitgeist but focus on the composer’s indelible contribution to Day, his experimental orchestrations (playing a sting of cymbals backwards on the soundtrack), and fiery temper. Other musical supplements include short pieces on the theremin (with an audio clip of a dissatisfied Herrmann berating the player for a workmanlike take: “This isn’t linoleum!”), and a revelatory score-only track.

The making-of featurette recounts producer Julian Blaustein bringing the concept of a UFO-related “A” picture to Fox head Darryl Zanuck, his torpedoing of the chief’s idea to cast an overly familiar Spencer Tracy as Klaatu, the novelty of the extensive second-unit shooting in Washington, and the casting of Gort with 7’7″ Hollywood doorman Lock Martin. A reading of the not-so-short story source, Harry Bates’s Farewell to the Master, runs nearly as long as the feature film and tells a darker, more idiosyncratic tale than its spawn (Klaatu is killed upon his Earth landing, and the true power rests with the robot). There are profiles of Bates, who netted $450 from the film rights and died poor and forgotten, and adapter North, a five-decade studio pro who was both a military history buff and a liberal critical of the arms race, exemplified by his PSA Race to Oblivion, featuring a Hiroshima survivor interviewed by Burt Lancaster.

And there’s more! The Cold War social commentary (and a literal decoding of the famous directive to Gort) is batted around by historians and sci-fi experts in a “Science Fiction as Metaphor” featurette, with a parallel drawn between Day’s robotic peace police and the newly formed United Nations. A 1951 Fox newsreel serves up plenty of U.S.-USSR tension over the signing of a postwar treaty with Japan, followed immediately by coverage of a film promo event and Miss America’s crowning. “A Brief History of Flying Saucers” is a primer on Roswell and other purported close encounters, with home-movie footage of UFOs and dueling testimonies from “contactees” and skeptics. Photo galleries, press materials and trailers (including one for the imminent Day remake) round out the bounty.

Supplying even screenwriter North’s translation of “Klaatu barada nikto,” this classic’s new package has all a fan needs save for a model ship.