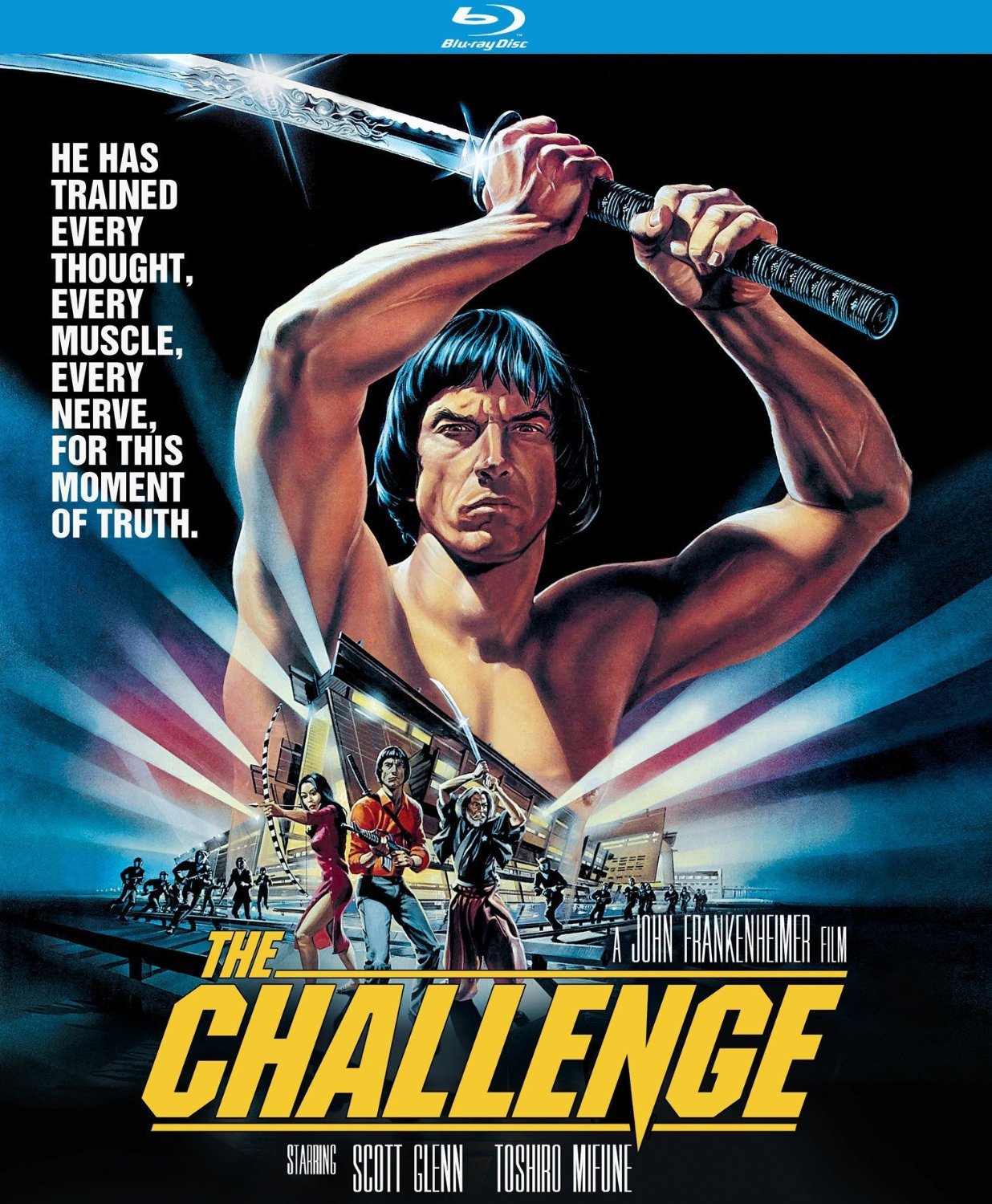 The phrase “East meets West” generally misrepresents the power relationship between cultures by implying a balance that’s absent and, instead, skewed in the West’s favor. Such is the case with The Challenge, even though the bulk of the film’s proceedings are set in Osaka, Japan, where ex-boxer Rick (Scott Glenn) serves as the missing piece for resolving a fractured relationship between two brothers: a samurai, Toru (Toshirô Mifune), and a wealthy industrialist, Hideo (Atsuo Nakamura). They’ve had a long-standing beef over a missing family sword, which for various plot reasons now resides in Los Angeles. Rick is hired to transport the sword back to Japan by a third brother, Toshio (Sab Shimono), though things go awry when Hideo’s goons, led by Ando (Calvin Jung), put a halt to Rick’s travel plans, firing multiple clips of ammunition at Rick’s head. All of the violence and sporadic genre pleasures serve to mask the film’s foundational disinterest in its own cultural appropriation, as Glenn’s Beverly Hills ninja learns the way of the sword without ever having to lay bare any of his ethnic privilege.

The screenplay, written by Richard Maxwell and John Sayles, appears to recognize much of its own lunacy and convoluted narrative developments, though director John Frankenheimer more or less plays the proceedings straight. The Frankenheimer of Seconds favored disorienting edits and claustrophobic camera distance; here, he cuts his action scenes largely in favor of continuity. Such a choice may incidentally play refreshing in an era of Chaos Cinema, to borrow Matthias Stork’s term, but the overall lack of risk or directorial flourish bleeds into the narrative as well, especially once Rick finds himself tucked away in Toru’s dojo. There, he meets Jiro (Kenta Fukasaku), a young boy who pouts because he’s unconfident he’ll one day become a great warrior, though the filmmakers use the boy less as a character in his own right than a motivating tool, so that when he’s badly injured after an attack on the dojo, it prompts Rick’s impending vengeance streak.

Culture clash comprises much of the film’s attempted humor, especially in a scene where live crabs are served for dinner. “Where do you cook ‘em?” asks Rick. Moments later, he’s made to drink down a leech as a right of passage, before chugging a glass of sake to replace the presumably bitter flavor. He ends up drunk and vomiting in a bush outside, after which Toru cracks a joke that Rick’s vomiting must have meant he enjoyed the meal. These are low-level stakes at best; instead of writing a dinner scene that would reveal either Rick’s vulnerabilities or interrogate his boorish hubris, the filmmakers fixate on the outermost differences that separate all involved.

The Challenge is intelligent, however, about updating the tropes of the western for the urban spaces of Japan, as Ando’s clan totes machine guns, while the members of the dojo rely solely upon swords, bows and arrows, and throwing stars. As in most revisionist westerns, the cowboy figures are the unfeeling savages, wholly dismissive of tradition and communal bond in favor of bolstering their economic bottom lines. When Ando shrugs early on and wonders why Toru’s clan is so “queer for swords,” there’s sharpness to the vulgarity that speaks to his underlying fear of difference in any form.

Nevertheless, that through line isn’t borne out by the film’s conclusion, as Rick, Toru, and female love interest Akiko (Donna Kei Benz) invade Hideo’s compound to end the feud. Naturally, Rick ends up in a battle to the death with Hideo after Toru is wounded, and the sequence gains surprising levity as each man’s sword proves less effective than nearby office products, as when Hideo shines a desk lamp in Rick’s eyes to momentarily blind him or in Rick’s use of a stapler to gain an upper hand. With these additions, there are fragments of an interesting film about the ways tradition, and traditional warfare, continue to be reshaped by new technologies, but the filmmakers ultimately seem more preoccupied with staging inventive death scenes.

Considering The Challenge never made its way onto DVD, this Blu-ray is a surprisingly clean and finely calibrated presentation, with the sound especially benefitting from the HD format. The picture is consistently clean and largely free of debris, though the transfer has clearly been struck from a 35mm negative with little additive effort to revamp and invigorate color, giving the film a bit of a washed-out feel that would likely change with a more rigorous overhaul. The DTS-HD sound mix, however, is stellar and balanced so that sudden bursts of music or action are heard as forcefully as they’re seen. In chase sequences, especially, Jerry Goldsmith’s score provides the proceedings a considerable boost.

None. Not even the meager pleasures of a theatrical trailer.

The Challenge, a perfunctory swords-and-shotguns entry in director John Frankenheimer’s oeuvre, arrives on home video without a single extra from Kino Lorber in a stellar but barebones Blu-ray presentation.