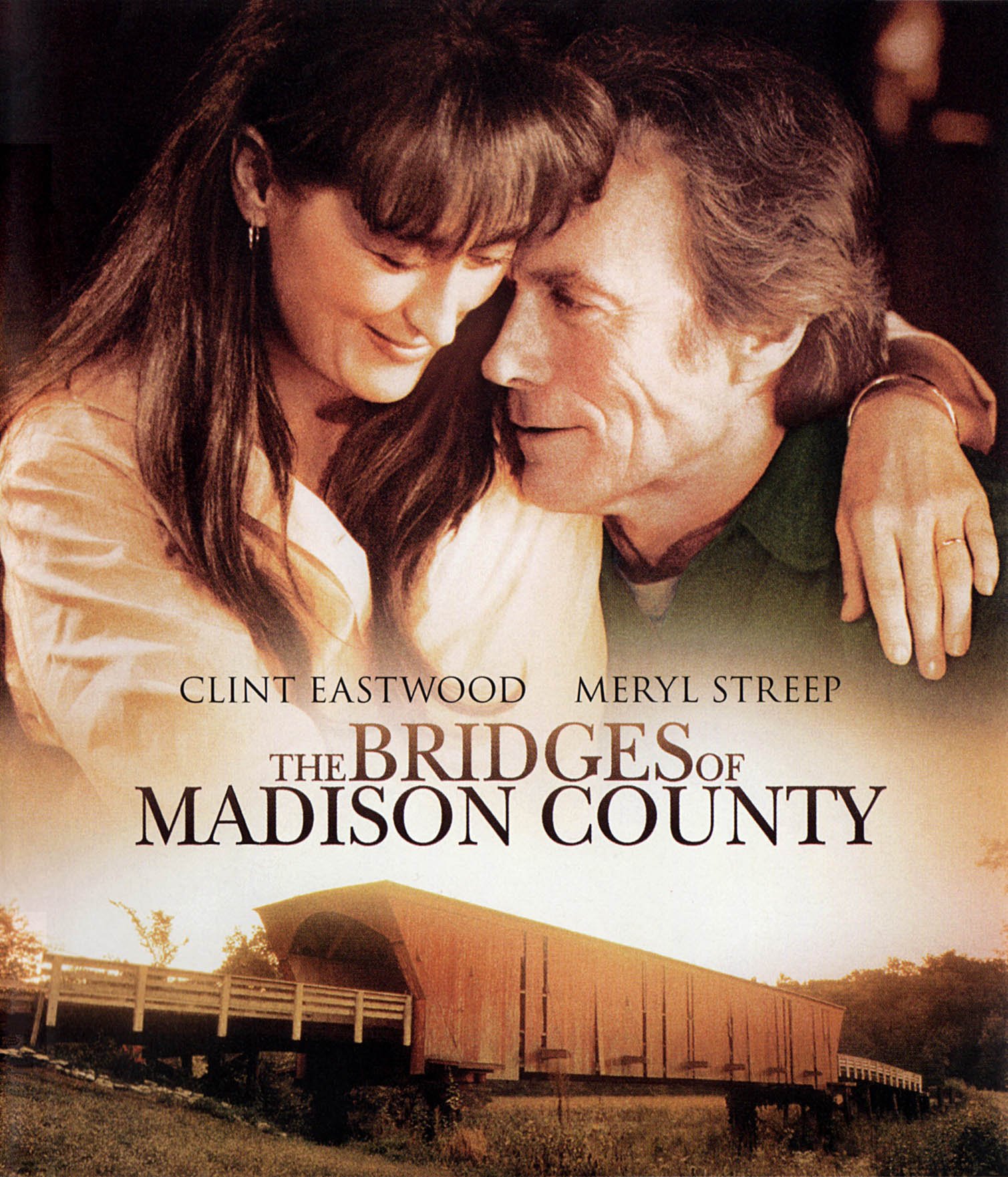 At its best, Clint Eastwood’s direction parlays its rigid functionality into a kind of minimalist poetry, where every shot shows thoughtful composition, but leaves the viewer to fill in the massive gaps of their unfussy design. It’s a trait that The Bridges of Madison County has in spades: Set in flat, grassy countryside in 1965 Iowa, the film bears the clear stamp of a filmmaker well versed in westerns, but who nonetheless adapts to the material at hand. For example, despite the nominal importance placed on the eponymous bridges being photographed for National Geographic by Robert Kincaid (Eastwood), the film largely lacks any natural vistas. Instead, the plains feel bordered within the frame, their expanse made constrictive.

That claustrophobic mood reflects the POV of Francesca Johnson (Meryl Streep), the Italian-born housewife who meets Kincaid while her husband and children are away at the Illinois State Fair. Streep fills her performance with infinitesimal pauses that give away Francesca’s sense of being trapped in this huge, empty space, never more obvious than when telling Robert how she came back to Iowa with her GI husband. Admitting she had no idea what Iowa looked like, Francesca says, “I just cared that it was America,” before hurriedly adding, “and, of course, being with Richard.” Streep avoids histrionics in showing how Francesca chafes with her surroundings, limning her freer spirit with overactive hand gestures that conflict with the softness of her voice or the façade of contentment she presents to the community. Only when confronted with Robert’s even greater reserve does she crack, attracted to him, but also resentful of the freedom he represents.

The underplayed performances are matched by the rest of the film, which foregrounds a delicacy in Eastwood’s filmmaking previously seen only in glimpses. True to the characters’ generational age, the film depicts the budding affair between Francesca and Robert with suggestion and caution over indulgence. Simple shot setups and long takes prioritize the acting and place special focus on body language and glances. As Francesca slothfully walks on a covered bridge as Robert sets up his camera below, the camera slowly tracks after her, and a cut to close-up as she peers through a gap between boards leaps from a sympathetic meshing of actor and camera movement to a full synchronization of the two. When Robert looks up toward the camera in a subsequent POV shot of Francesca watching him, the effect is not unlike Raymond Burr at last looking up in Rear Window, a jolt to the viewer as much as Francesca that shatters the reverie of her idle gazing.

Eastwood only compounds this coy approach when dealing with the love scenes. Dissolves fade between images as Francesca and Robert give in to temptation, eliding over any R-rated material. But sometimes the transitions don’t even omit anything graphic, moving laterally from scenes of dancing and kissing to more dancing and kissing. That adds a second dimension to the dissolves beyond ratings practicality, a means of illustrating the fleeting nature of the couple’s tryst. Indeed, the most concrete, unambiguous scene in the film may be that of Robert bearing witness to the community silently rejecting an adulterous woman, seeing in an instant the permanent consequences that would befall Francesca if anyone found out about them. The film never tries to hide how doomed their affair is, but that doesn’t make its conclusion any less devastating.

The Bridges of Madison County capped off an impressive streak of films that saw Eastwood put numerous aspects of his persona under the microscope, from directorial tyranny in White Hunter, Black Heart to the fatalistic disgust with violence that imbues A Perfect World with palpable regret. Yet if The Bridges of Madison County is not the best of these films, it may nonetheless offer the most startling revisionism in the director’s oeuvre. Eastwood’s auto-critique reached its fullest expression in the Christ-like martyrdom that closed Gran Torino, but he never looked more vulnerable or less iconic than in Robert’s final encounter with Francesca. With his hair matted in thin strips over his forehead as pouring rain masks his tears, Eastwood looks like an abandoned dog more than a leading man. And though Robert drives off ahead of the Johnson family, Eastwood gives the distinct impression of at last being the one left at the homestead watching as the woman rides away into the sunset.

The Bridges of Madison County is one of Eastwood’s most beautiful films, which makes the amount of DNR and edge enhancement applied to some shots bitterly disappointing. Everything in long shot looks great, and colors are well balanced throughout, but close-ups and medium shots of faces reveal a waxiness at odds with the film’s earthen quality. In some later scenes, set against dimmed, dull interiors, Robert and Francesca are so sharply defined against the background and look so plastic that they resemble models in one of Gregory Crewdson’s warped domestic photographs. Overall, the disc looks better than the old DVD, but some of the warmth of the film has been lost. The audio fares better, faithfully capturing the film’s quietness, especially the hollow, faint echo of lines spoken inside the main house.

A commentary track featuring editor Joel Cox and cinematographer Jack N. Green provides ample detail about the production, but for two guys who worked so much with Eastwood, the pair devote a large portion of their time simply marveling at the man’s talents in front of and behind the camera. “An Old-Fashioned Love Story: Making The Bridges of Madison County” is a standard, half-hour EPK documentary, yet it manages to impart a surprising amount of information about the location scouting, the approach to the screenplay, and the direction. Most importantly, the film clips used in the documentary haven’t been updated to pull from the Blu-ray transfer, offering a chance to see what this new disc gained and lost. An unnecessary music video for the film’s love theme, “Doe Eyes,” and a theatrical trailer complete the package.

One of Clint Eastwood’s best films comes to high-def with an aggressively scrubbed image that robs it of some of its beauty.