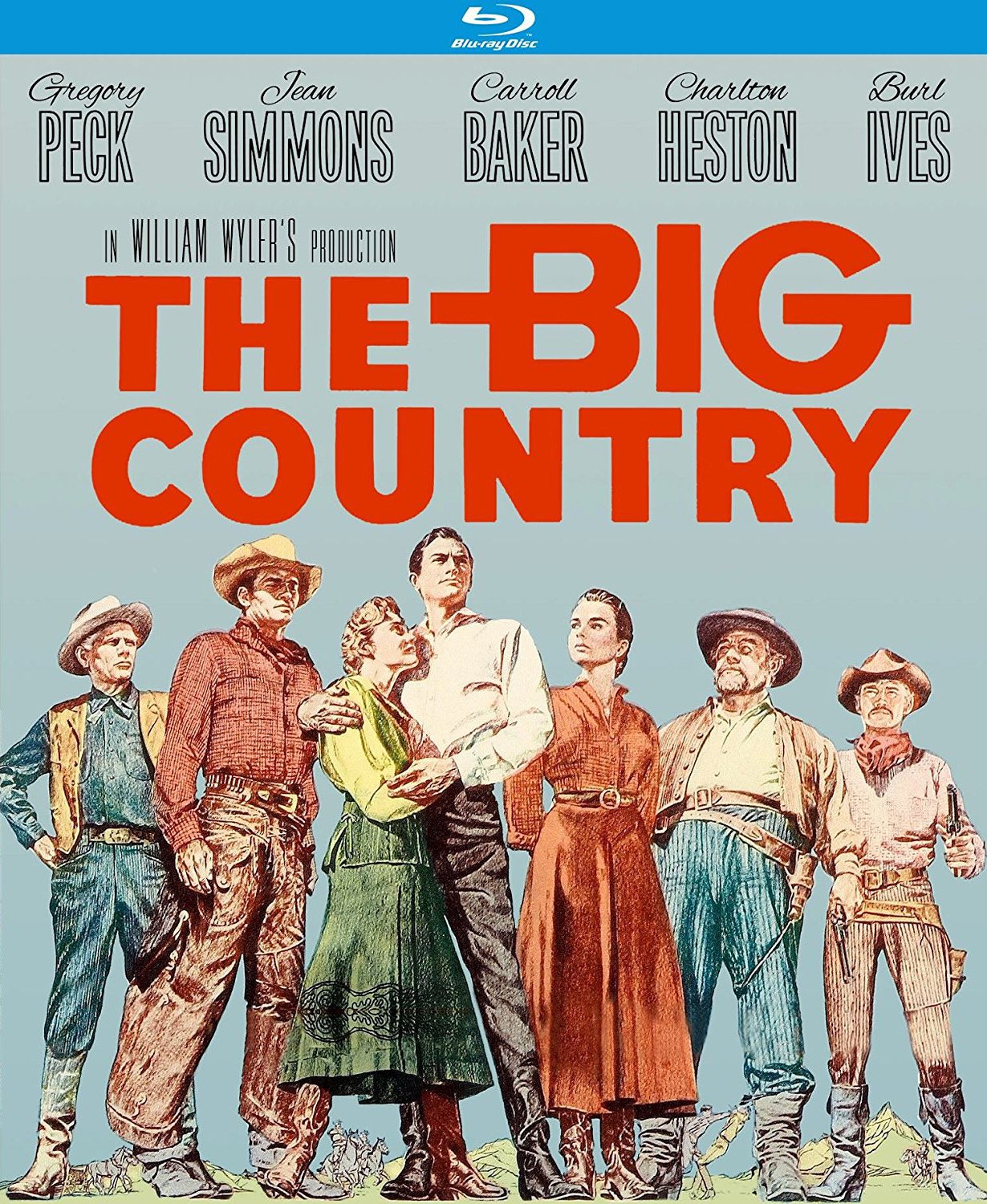 In 1962, Jean-Luc Godard claimed that, “The Americans, who are much more stupid when it comes to analysis, instinctively bring off very complex scripts.” One can’t help but think of The Big Country as epitomizing the sort of screenplay Godard had in mind. The adaptation of Donald Hamilton’s novel is credited to three screenwriters and juggles over half a dozen main characters, teasing out their latent desires and masculine hang-ups, ranging from apparent incest fantasies to violent outbursts that cover for repressed sexual energies. The film was made in 1958, so none of this is made explicit by William Wyler’s direction, yet the subtextual seeds of a New Hollywood plant are sewn here, in what is certainly one of the kinkiest and angriest westerns of the ’50s, second only to Nicholas Ray’s Johnny Guitar.

As in John Ford’s subsequent The Man Who Shot Liberty Valance, Wyler’s film uses the western to make sense of contemporary socio-political debates in American culture. Jim McKay (Gregory Peck) arrives in the Old West, hailing from “back East”—presumably the New England area—to marry Patricia Terrill (Carroll Baker), the daughter of Major Henry Terrill (Charles Bickford), a wealthy rancher. West and East may as well be political parties, with the former advocating vigilante justice through fisticuffs and the latter arguing for conversation through judicial due diligence. Henry Terrill is suspicious of Jim’s collective reluctance to ride wild horses, carry a loaded pistol, or defend his beloved with violence when the Jim and Pat are taunted by the Hannasseys, a group of local roughnecks led by Buck (Chuck Connors).

Wyler initially establishes the expansive mountain ranges of Arizona and California as a kind of idyll; a credits sequence is punctuated with the main theme of Jerome Moross’s score, a hopeful-sounding motif that accompanies Jim’s attempted pastoral bliss. Gradually, Jim realizes the land’s sublime potential is being tarnished by a “civil war” between the Terrills and the Hannasseys, made concrete once the Hannassey patriarch, Rufus (Burl Ives), crashes a dinner party by delivering a caustic speech that fully announces the animosity of the years-long rift over land disputes and cattle farming.

Beyond the evident technical prowess that roundly defines Wyler’s filmmaking, The Big Country dares to assert gun-toting diplomacy as a deviant pathology that isn’t without its sexual undertones. Pat’s increasing frustration with Jim stems from her belief that he could “never be half the man” her father is, a third-act punchline set up earlier by Pat’s seeming infatuation with Henry’s status and willingness to physically assert himself. Conversely, Buck’s lust for, and attempted rape of, schoolteacher Julie Maragon (Jean Simmons), who owns the property both families covet, is related directly by the film to his own lack of formal education. He constantly refers to her as “teacher” in a manner that hardly conceals his psychological fragility; in turn, he taunts Jim’s “gentleman” status because he’s unable to define himself with any discernible purpose beyond slinging booze and stirring up shit. As conceived by the filmmakers, Buck is a figure of complex, even tragic proportions whose only outlet for his inexpressible frustrations is violence.

The film relates character psychology to a landscape that becomes the stage for some highly theatricalized spectacle. When Terrill’s foreman, Leech (Charlton Heston), finally goads Jim into a fistfight to settle their squabbles, they do so with miles of mountain ranges and desert land as the backdrop. Wyler frames almost the entire event in extreme wide shots, reducing these otherwise towering men to the size of insects, conceiving a hilarious visual metaphor to accentuate Leech having made, as the Southern phrase goes, “a mountain out of a molehill.” Bruised and battered, Jim stares down an equally thumped Leech and utters, “What did we prove?” It’s one of the most satisfyingly homoerotic anti-climaxes to a dick-measuring contest in the entire western genre. Although The Best Years of Our Lives remains Wyler’s most essential assessment of the American psyche, The Big Country is stunning for how it meshes the intimate strife of a particularly white American stripe of self-resentment with the epic vista of Technirama Technicolor.

Kino Lorber’s Blu-ray transfer of The Big Country highlights the film’s extensive use of deep focus in wide shots to an extent that previous home-video releases of William Wyler’s classic haven’t. The result is nothing short of remarkable. Early scenes of McKay’s arrival are best at highlighting the depth of field, with figures moving in a multitude of directions behind the action in the foreground, all in sharp focus. Colors are roundly crisp and robust, without any blurring or bleeding effects. The precision is especially evident in the fistfight between McKay and Leech, as the smallest pieces of dirt and rock are rendered in full, breathtaking view. There are, though, sporadic white or black specks of debris on the otherwise stellar image; if anything, though, this is evidence that the grain and emulsion are still present in the image and that they haven’t been tampered with or reduced by digital combing. The two-channel DTS-HD audio track is lossless and seamless, at its best when bellowing Jerome Moross’s memorable score. Dialogue is mixed at an appropriate level, as are sound effects.

On his feature commentary track, historian Sir Christopher Frayling brings his usual acumen to the film’s production, themes, and critical reception. Those familiar with Frayling’s excellent commentaries on releases for Sergio Leone’s films will find his musings to be of equal quality here, particularly in discussions of image construction and how The Big Country fits within the scope and history of other revisionist westerns. Equally useful for William Wyler fans or historians is a one-hour biographical episode of American Masters from 1986 titled “Directed by William Wyler.” Tons of famous faces offer their perspective on Wyler, from Bette Davis to Barbra Streisand. Wyler himself speaks at length about his own career, having given the on-camera interview just three days before he died of a heart attack. Also included are outtakes from the documentary, with Gregory Peck, Charlton Heston, and Billy Wilder offering more recollections of their work and collaboration with Wyler.

The remaining supplements are enjoyable, if inessential when stacked against the commentary and documentary. Three separate extras offer interviews with members of Peck, Heston, and Wyler’s families, respectively, which delve into each of their personal remembrances. Writer-director Larry Cohen chimes in for a brief appreciation of Chuck Connors, arguing that the actor could have beaten Clint Eastwood to the punch as the ’60s bad boy of westerns had he linked up with the right filmmaker rather than starring in five seasons of The Rifleman from 1958 to 1963. “Fun in the Country” is a brief featurette produced during the film’s production, composed almost entirely of on-set footage. Additionally, there’s a roll call of original promotional materials, including image galleries, a theatrical trailer, and a TV spot.

Kino Lorber’s majestic Blu-ray presentation of The Big Country is nearly an essential presentation of William Wyler’s masterpiece, on a disc loaded with enough extras to satisfy casual and rabid collectors alike.