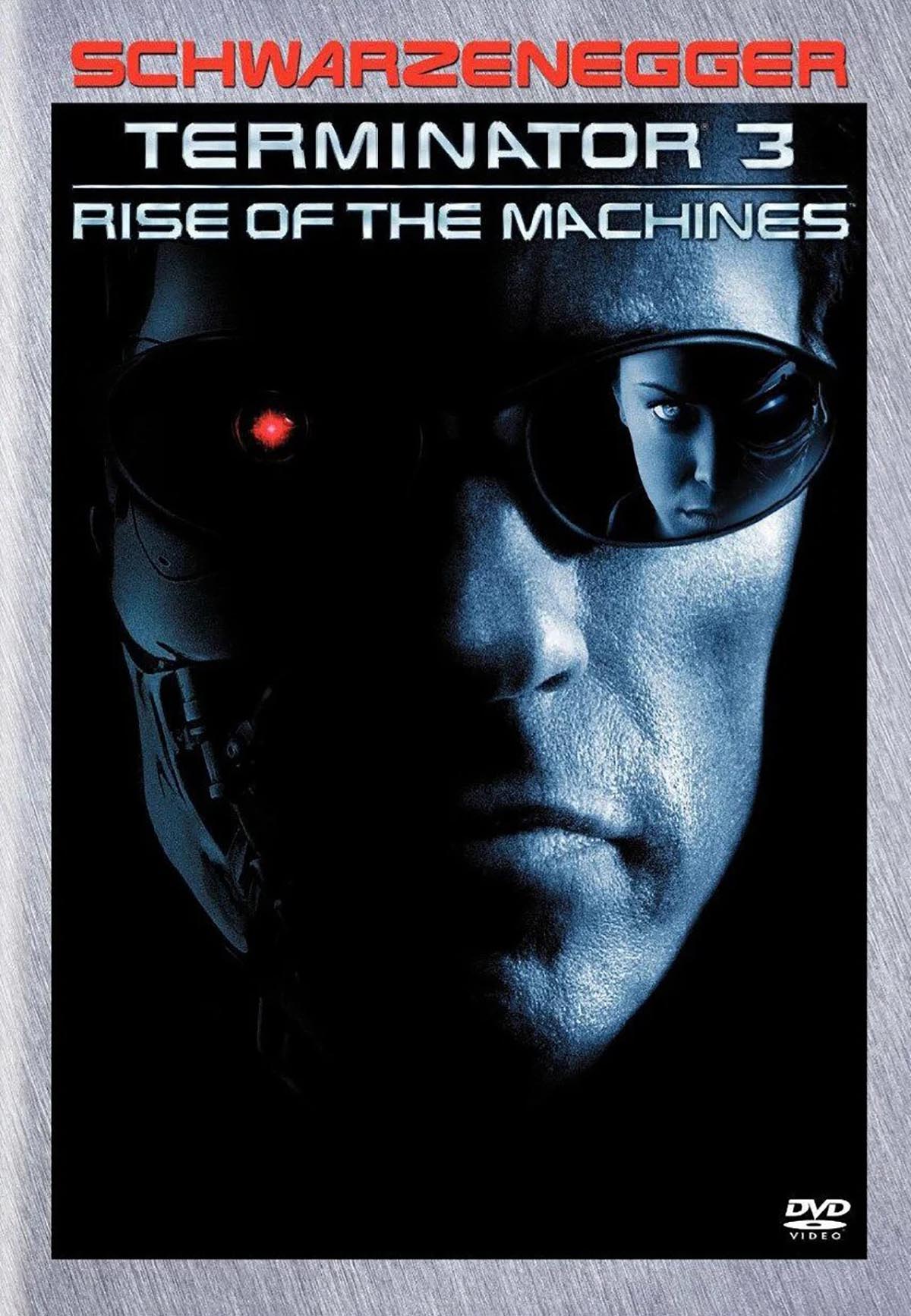 A naked man. A naked woman. A slithering snake. A burning bush. No one scene in Jonathan Mostow’s Terminator 3: Rise of the Machines comes close to approximating the feral apocalyptic swell of James Cameron’s Judgment Day but it’s certainly drunk on bibilical allegory. Arnold Schwarzenegger’s Terminator returns to save John Connor (Nick Stahl) and his future wife Kate Brewster (Claire Danes) from the wrath of a sexy, seemingly indestructible T-X (Kristanna Loken). Because the film’s ruminations on destiny and time travel are by now redundant and certainly not without their paradoxical blind spots, screenwriters John D. Brancato and Michael Ferris (responsible for David Fincher’s undervalued paranoiac nightmare fantasy The Game) choose to call attention to the unbending nature of fate. Not that the filmmakers spend all that much time justifying the film’s existence, but it’s a relief that they’ve acknowledged the inevitability of the war between man and machine. And if there’s a cumbersome been-there-done-that quality to the film, the filmmakers choose to poke fun at rather than deliberately trump Judgment Day. From the leather-clad Terminator’s penchant for sunglasses and cornball one-liners to Connor’s wounded-dog routine, no shtick is immune. Because Loken’s T-X is less liquid-based than Robert Patrick’s T-1000, her tricks are arguably nowhere near as cool. But Mostow more than compensates with a series of exciting and ridiculously over-the-top set pieces, none better than an elongated road chase that pits T-X, a crane, and a horde of unmanned police cars against Kate and John inside an animal hospital van. Both T-X and Brewster are very much in control of the film’s chaos, and the combination of Loken’s deadly catwalk strut and Danes’s gut-busting one-liners (my favorite: “Just die, you bitch!”) almost makes up for the fact that neither woman is remotely as ferocious as Linda Hamilton. When the shit hits the fan, the dust settles in a somber art deco purgatory. Predicated on all sorts of chance encounters and somber resignations, Terminator 3: Rise of the Machines reimagines the Adam and Eve myth but with a post-industrial edge and a distinctly feminist slant.

Lots of blacks, lots of opportunities to mess things up. As such, it’s no small feat that this transfer looks as good as it does. Colors (see Loken’s red suit) are pristine and skin tones are fantastic. Want proof? Skip to chapter three to see Loken naked and skip to chapter five to see California governor (insert laughter here) Schwarzenegger in his birthday suit. As for the sound: it will blow your T1 to smithereens.

Disc One: a movie and video game trailer and two commentary tracks. Because Schwarzenegger, Danes, Loken and Stahl were all recorded separately, the composite “stars and director” track is a complete and utter mess. Schwarzenegger points out the obvious, Loken takes things too seriously (all she talks about is how physical the role was for her), Red Bull fan Danes plays the chicken-with-her-head-cut-off (Mostow does say that this was the actress’s first commentary track), and Stahl gets lost in the shuffle. Skip it entirely and check out Mostow’s solo track. Not only is he informative and easy to listen to, he knows how to cut to the chase. He admits at one point that he was always conscious of the fact that he needed to be “constantly selling the jeopardy and the drama” of the film. Disc Two: a stupid Schwarzenegger intro (the commentaries are on the first disc, Mr. Governor) and numerous features. First up is a run-of-the-mill HBO First Look making-of documentary. That’s followed by the fascinating and genuinely funny “Sgt. Candy Scene,” which was deleted from the film no doubt because it doesn’t fit the tone of the rest of the film (frankly, I can only see a scene like this fitting into a Paul Verhoeven movie). Next is a “Terminal Flaws” gag reel, then an intense, six-part “Visual Effects Lab” (sorry, no Play All function) that culminates with a cheesy “create your own visual effects” function. Failure to create your own “eye-popping action sequences” will result in termination. Oooooooooooooh! The “Skynet Database of Weapons and Personnel Dossiers” makes for a really cool trivia game and the “Terminator Timeline” should clear up for some people what’s pretty much un-clearable. Also included here are zippy storyboards, a mini “Dressed to Kill” piece, a look at the films toys, a trailer and making-of featurette for the film’s PC game.

Despite the fact that one feature on this DVD actually has the nerve to threaten us with termination, this is a pretty un-dorky two-disc set.