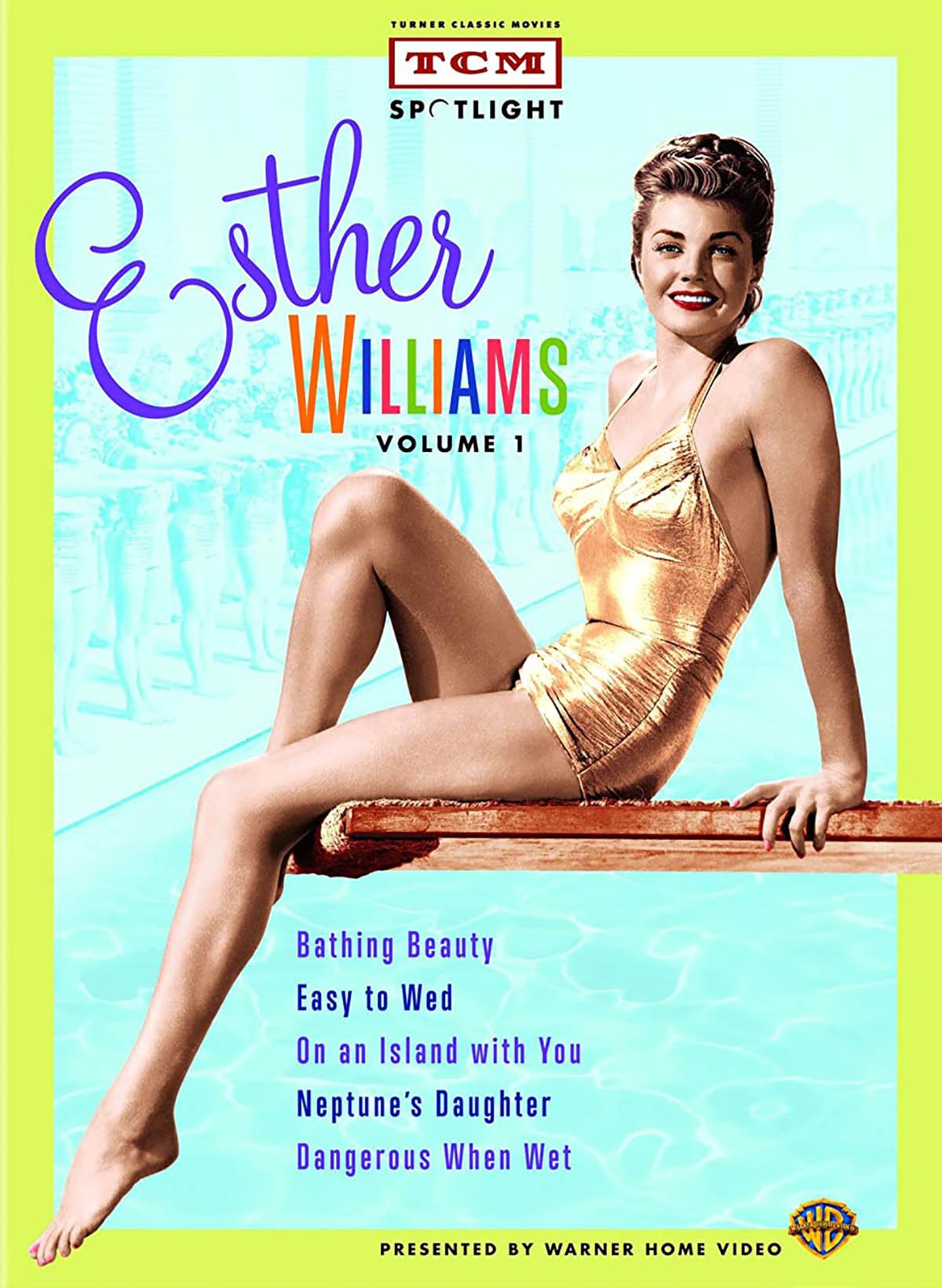 Bad movie guru Michael Sauter was being a tad unfair when he surveyed the career of Esther Williams and declared, “As an actress, she was a good swimmer. As a singer, she was a good swimmer. As a dancer, she was a good swimmer.” But a swimmer she predominately was, and MGM fashioned for her a tidy (or should that be tidal?) career by surrounding her with as much musical-comedy flotsam and jetsam as they could while champion swimmer Williams stood around and waited for her chance to dip, stroke, or dive into the nearest Olympic-sized pool. Your typical Esther Williams extravaganza would feature vaudeville sideshows, copious musical interludes, hastily sketched out comedy routines, and even hastier romantic entanglements. All the goings on would be mere prelude, though, with each film ultimately winding up in an extended boffo splashy funtime during which Williams and her aquatic chorus would parade their sheer lamé-encased water wings, dive sidelong in a cascading ripple of pink thighs, and paddle their way into leg-spreading neo-Busby Berkeley patterns of geometric eroticism. It’s pretty safe to say that, during these numbers, Williams and her girls were hardly the only ones holding their breath.

But Lord if the girl couldn’t act her way out of the shallow end. Turner Classic Movies has collected the evidence in the first volume (of a purported series) of DVDs spanning her first decade in Hollywood. Beginning with her first starring vehicle, 1944’s Bathing Beauty, and wrapping up with the Anchors Aweigh-swiping Tom and Jerry antics of 1953’s Dangerous When Wet, the set makes a pretty convincing case for WWII-era studios’ relentless application of moviemaking craft to assault viewers into joy (the better to slip war bonds into their pockets). Though each film is blissfully unaware of auteurism, there is the constant guiding hand of gag writer-cum-scripter Dorothy Kingsley, who keeps the formula consistent even when updating a plotty script for 1946’s Easy To Wed. Just like sharks who have to keep moving forward lest they die, Kingsley’s scenarios usually try to ignore your standard narrative pit stops in favor of getting to the next big attraction.

Bathing Beauty, which someone updating Wikipedia claims was MGM’s third biggest hit ever at the time, just after Gone with the Wind and the 1925 Ben-Hur (though I can find no other independent source claiming the film was that massive a hit), is the template for all that followed. If it isn’t the best film in the set, it certainly is the most definitive. So much is going on, in fact, that Williams is very near reduced to a supporting presence in her own film. She plays a fetching young swimming teacher who ditches Red Skelton at the altar when a woman with two noisy kids crashes the ceremony claiming (falsely) Skelton is their father. Since Williams didn’t escape before they were pronounced man and wife, she hides out at an all-girls college until she can secure an annulment. Skelton finds out the school’s charter doesn’t specifically rule out the possibility for men to enroll. Before you can say “farce,” he finds himself dressing up in a tutu for ballet class and Williams finds herself upstaged. With musical numbers in just about every conceivable style—trumpet-blaring jazz, floorshow conga, ‘40s pop, even a touch of way-dated Hammond organ pyrotechnics courtesy Ethel Smith—Bathing Beauty ignores both clauses in the title until the last 10 minutes, in which Williams accepts her lot in monogamy by switching careers from schoolteacher to flirtatious pool showgirl. Appropriately, columns of passionate fire are surrounded by quenching, extinguishing fountains of water. Never before had the metaphorical conjugal bed been suggested with so much piss and vinegar.

That this formula, pardon the pun, only holds so much water is obvious. Nonetheless, Williams was able to coast through dozens of pictures without anyone ever expecting her to do much else than tread in place and smile for the camera with her broad, athletically handsome face. If the other films in the DVD set have failings, it’s that they try to stray too far from the template. Easy To Wed, probably the most unwatchable, recruits the oddly muted Lucille Ball for a fussy reenactment of the Jean Harlow-Myrna Loy screwball classic Libeled Lady. What seemed loose and carefree in Bathing Beauty instead comes off as haphazard and cluttered in the follow-up. As if trying to put quotation marks around its disposability, 1949’s Neptune’s Daughter uses a perpetually underwhelmed narrator to undercut its central love story, surrounded by polo antics and swimwear fashionistas. Even by this point, the charm had begun to wear off and, when Williams brought it in closer to home with Jupiter’s Darling, her B.O. draw was pretty well lost in space. Before that, though, Williams swam her way to a new horizon of desperation with Dangerous When Wet’s mirthless animated interlude, in which she is repeatedly drawn away from her attempt to swim the English Channel by opera-singing octopii, schools of seahorses, and an unintentionally auto-critical lack of direction. (Ironically, helmer Charles Walters was probably the only reasonably professional director in the entire DVD set.)

If the set has a hidden gem, it’s 1948’s film-within-a-film On an Island with You. Williams plays, with surprising aplomb, an actress who is falling in love with her co-star on their Pacific location shoot. This is completely understandable, as said co-star is played by olive-skinned Ricardo Montalban in his rowr prime), which is sending the already runaway production into an out-of-control tailspin and turning its actors complexions into rich, Corinthian leather. While stopping short of bonkers, the attractions of the film are diverse and persistent. Jimmy Durante plays the put-upon assistant director, who reminds Xavier Cugat and his pet Chihuahua that the days of vaudeville aren’t over until he’s had his chance to lord over the piano and sing a mouth-clicking novelty tune. Cyd Charisse makes up for Williams’s inability to dance on dry land with a couple of first-rate dance numbers, including one riotous travesty of Polynesian ritual that involves Charisse being flung around at the ends of spears. (Montalban, incidentally, turns out to be a fantastic dance partner both in and out of the pool.) Peter Lawford (also at what I guess would pass for the prime of his life) plays a Marine on set to make sure Montalban’s collar stays stiff, though he’s more interested in keeping Williams’s lips moist and well fed with the cans of Spam he keeps buried in his remote island hidaways. What does this all add up to? Not a whole lot beyond the accrual of emphatically entertaining bits and pieces, but it will have to suffice until they release the second volume with (one hopes) Million Dollar Mermaid.

With the exception of a drab-looking Easy To Wed, these transfers look vivid, almost brash. There seem to be a few focus problems marring Neptune’s Daughter, but the two outstanding features in the set-Bathing Beauty and On an Island with You-are blessedly the most well-presented. Audio is standard mono.

Though it initially seems as though the set is stocked to the gills, most of the bonus features on the various discs are of the “night at the movies” variety typically found in Warner Bros.’s catalog releases, meaning a lot of these features have very little to do with the Esther Williams mystique and a lot more to do with raiding the vault for educational shorts and cartoons. Bathing Beauty features a one-on-one between Williams and TCM host Robert Osborne in which Williams, charming and down to earth, admits she never considered herself a movie star, or didn’t really feel the need to be one at any rate. Neptune’s Daughter and Dangerous When Wet both feature musical outtakes and radio interviews. Otherwise, get ready to learn all about how a man’s wife can give him insomnia, and how people with shitty jobs should just be thankful they don’t earn their paychecks by jumping into pools from 50 feet up.on horseback. Point taken.

Tawny and all wet, the bare skin of Esther Williams in her earliest features probably kept up the morale (and other things) of the boys fighting overseas.