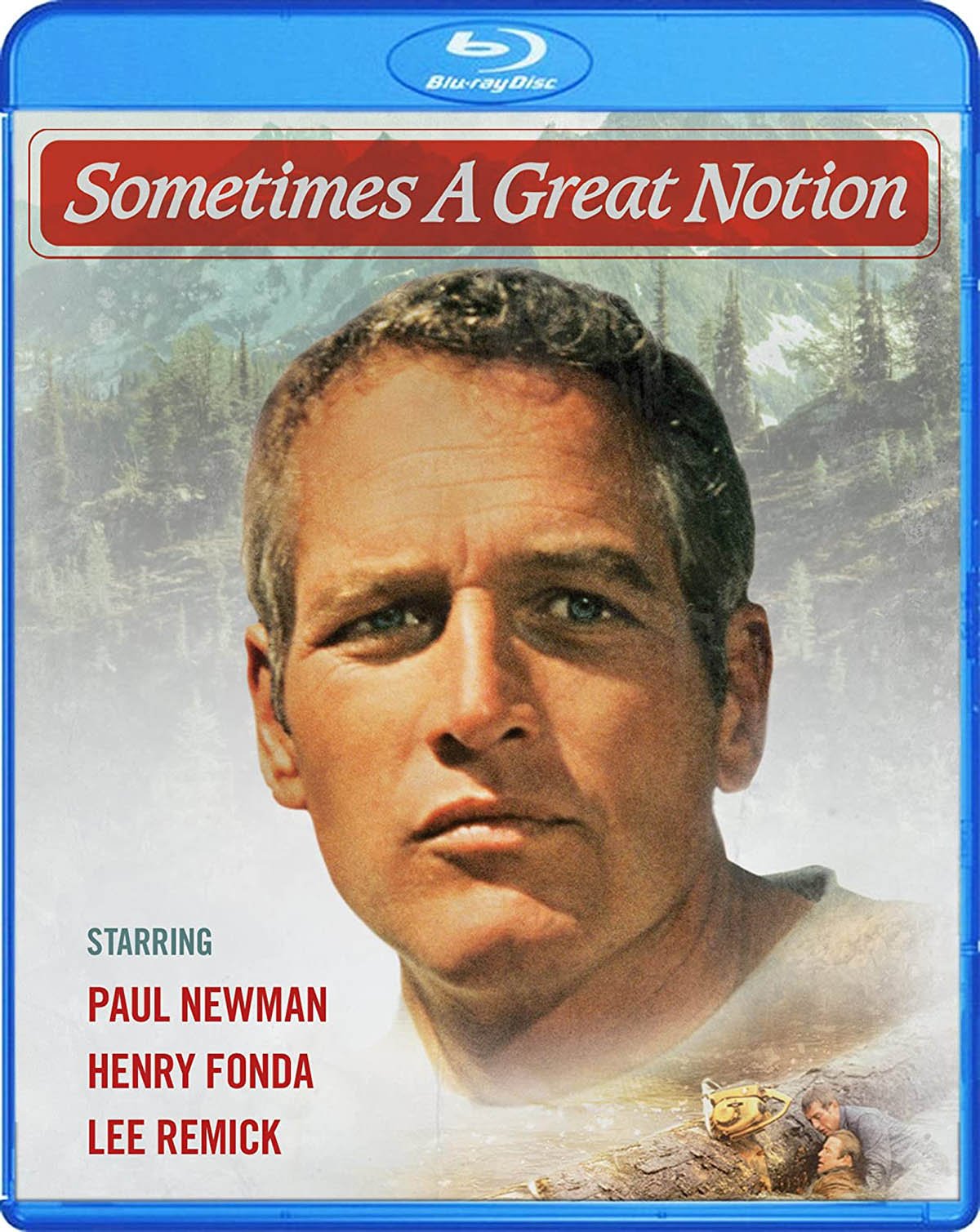 Business and the quotidian labors that drive enterprise are extensions of a singular political and social mindset in Paul Newman’s adaptation of Ken Kesey’s Sometimes a Great Notion. As such, the movement to unionize local loggers which looms over the business dealings of the Stamper family—the film’s central focus—is seen as a movement toward conformity far more than a one based in humanitarian need or fiscal responsibility. Indeed, the bigoted, cantankerous head of the family, Henry (Henry Fonda), throws live dynamite at a union delegate as the film opens.

Of course, Kesey’s beloved, hard-bitten tome plays on the concept of labor as identity, and Newman makes a lovely, if noticeably uneven, blue-collar sonata out of Kesey’s potent ideas. Henry and his loyal sons, Hank (Newman) and Joe (Richard Jaeckel), are happy to send a second, more intimidating team of union organizers packing not long after tossing dynamite, but are then burdened by the arrival of Leland (Michael Sarrazin), Henry’s left-leaning bastard son, who’s looking for work and a bed. He gets both, and a great deal of the film’s leisurely narrative is devoted to his acclamation to the physical rigors of hard outdoor labor and the oft-overlooked, crucial skill of such work.

For Newman, Stamper’s strides of singularity against the union’s certain uniformity, to say nothing of the casting of Fonda, provided parallels to his career as a Hollywood actor, his fiercely independent political activism, and the tremendous public scrutiny that befalls those who refuse to cleanly separate these to facets of identity. The allegorical implications suggest a stroke of risible self-aggrandizement, and Newman occasionally skirts posturing, but he locates a stirring pulse of pure life in the busy, agitated community underneath the majestic, bristling emerald vistas of wooded Oregon. Everyone has something to hide in the community that the Stamper family has kept purposefully removed from, and their secrets and indiscretions glow bright green when their fiscal station is threatened. Money buys façades, and Newman makes lively and lovingly detailed drama out of the shedding of the second skins.

The Stamper family has its own shameful, hushed history (Leland’s mother’s affair with both Henry and Hank, the emotional lacerations laid against Hank’s mother), but there’s no hiding it, and their social standing in the town reflects that. And it’s that great stalemate between refusal of atonement and endless abstention from progress that helps bring about the downfall of Henry and a slight redefinition of Hank. Working from John Gay’s excellent script, Newman relates potent, unique political ideas through the symphonic friction between social, even national progress and the defiant idiosyncrasy of personal choice. The film’s distinctly tragic climax, involving a logging accident, testifies to the irrefutable peril of hard labor, but the film’s true haymaker is Hank and Leland’s delirious concluding act of macabre symbolism, laced with triumphant stubbornness.

The burdens and seemingly unavoidable, haunting certainties of legacy can be found in the thematic bedding of nearly every film Newman was involved in, but Sometimes a Great Notion is perhaps his most politically engaged and challenging dissertation on the subjects of legend and lineage. If the film is visually unprovocative and a bit inconsistent, there’s certainly no lack of poetry in the earthy visuals Newman and DP Richard Moore build. Newman handles the film’s more intimate exchanges—between Leland and Hank’s burgeoning independent wife, Viv (Lee Remick)—with aplomb, and he lends a booming universality to the crossed political wires of an independent lower middle class on the cusp of disintegration. Even more striking, Newman averts the pitfalls of easy, heroic metaphor by keying into a something both small and immediately recognizable: the rhythms and conflicts of physical labor and the workaday grind.

The most glaring issue with Shout! Factory’s transfer is the sharpness corrections that is, at times, almost distractingly noticeable. Thankfully, it’s mostly ignorable, but then there are also problems with clarity, which can get a bit soft in certain scenes. Textures are regularly well-defined, from the bark of the trees being knocked down to the fibers of Leland’s coat, and black levels are solid and inky. This is all to say that visually the transfer is serviceable but only serviceable, and the movie deserves more attention than that. The audio, however, has been transferred with admirable care. Dialogue is crisply out front, with sound effects and Henry Mancini’s oaky score filling out the back nicely.

Shout! Factory deserves credit for giving Paul Newman’s oddly invigorating second film as a director a better A/V transfer than previous releases, but offer nothing in the way of extras.