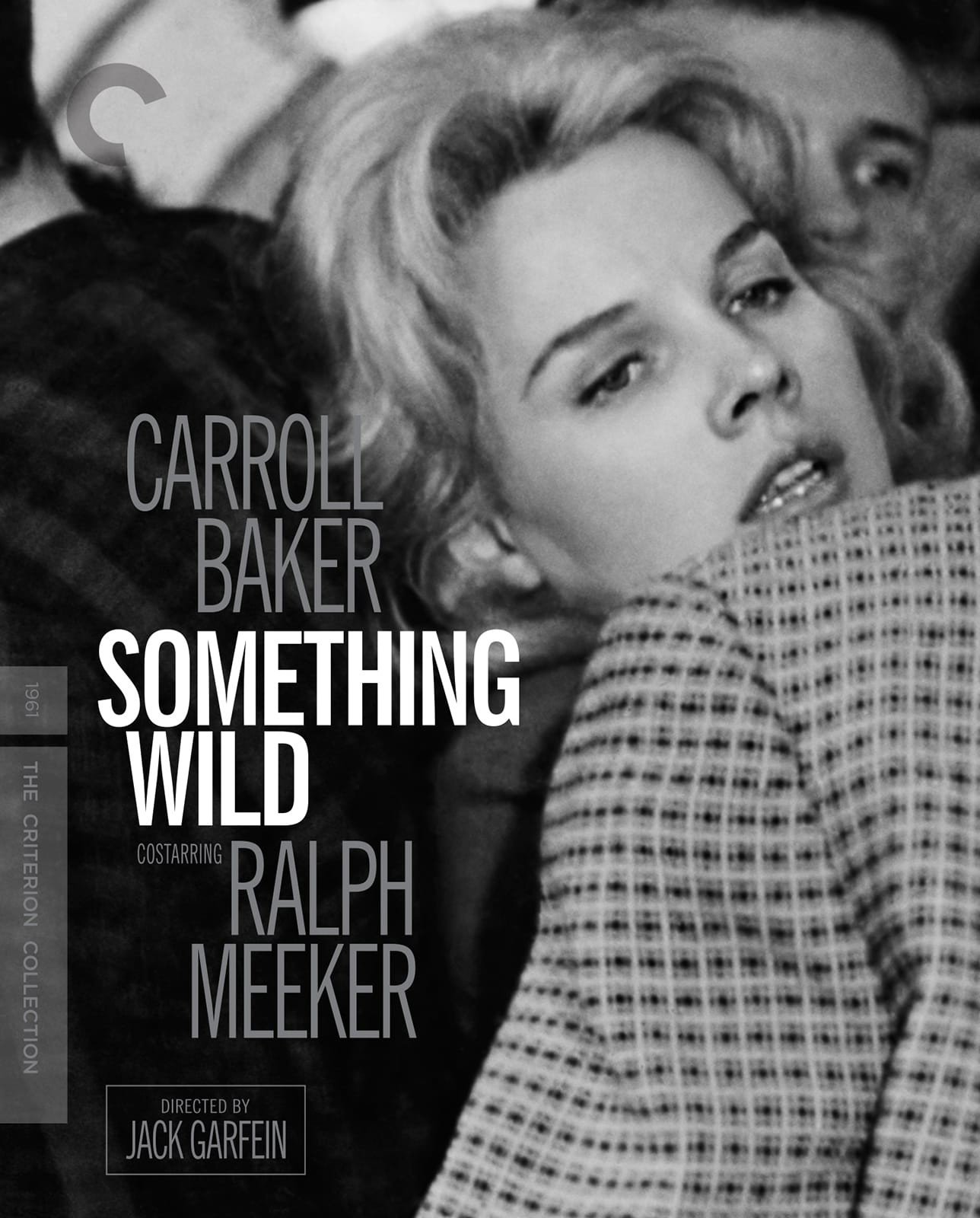 Jack Garfein’s Something Wild opens with a title sequence by Saul Bass that stresses the teasing duality of lightness and darkness. Skyscrapers, in an image reminiscent of Bass’s title sequence for North by Northwest, are imposingly vertical, composed of harshly symmetrical glass walls that suggest a designer prison. Running down the middle of a central building is a line of shadow, demarcating light on the left side and blackness on the right. Bass then cuts to crowds of people that have been arranged in geometric diptychs and triptychs that complement the shape of the cityscape, suggesting that cities mold us according to their patterns, subliminally influencing our notions of good and bad, which are the enabling wellsprings of repression.

This sequence perfectly sets up the film that follows, which cultivates an alienated realm brought on by profound trauma and exacerbated by repression, which notions of light and dark are pitifully inadequate to explain. In the first scene, Mary Ann (Carroll Baker) gets off a train. She’s a pretty young woman, clearly a student, who looks back at the train she’s just exited, regarding a kissing couple with an expression that conveys hopeful curiosity. Retrospectively, this is a brutal moment—a final breath of possibility before Mary Ann is ushered into a dimension of unending revulsion. She skips on the street along the park and notices a broken branch. She’s then snatched by a large male stranger, pulled behind the bushes, and raped.

The rape scene encapsulates the brilliance of Something Wild, which takes a highly politicized atrocity that outsiders can’t hope to understand, humanizing it with a mercilessly empathetic devotion to detail. This rape scene is chaste by contemporary standards of on-screen violence, but Garfein and Baker offer us something more illuminating than gore: intimacy. When the rapist pulls Mary Ann’s dress up, we see the flesh along the side of her body as it’s poked by a rock, and the suffering and humiliation of Mary Ann’s violation become painfully explicit. Another astute and heartbreaking image follows: The rapist stands up when he’s finished, and steps on pages that have scattered out of Mary Ann’s schoolbooks. The association is unmistakable, as she’s been treated by this interloper as something to be used and discarded like trash.

The rapist has killed the woman who was capable of skipping and regarding kissing strangers with awe not five minutes prior. We barely knew that version of Mary Ann and we feel the loss, spending the rest of the film with a woman of coiled, slumped, careful guardedness who’s always on the verge of panic—a woman who’s both stronger and weaker than the one we first saw getting off the train. Many stories of rape are bifurcated into “before” and “after” narratives, often paving the way for disreputable catharsis. So is Something Wild, but it’s almost entirely concerned with “after,” manipulating and eventually dispensing with the audience’s expectation that Mary Ann heal by the convenient demands of a three-act screenplay. Garfein and Baker devote long, mostly silent passages to creating a highly stylized yet behaviorally exacting portraiture of Mary Ann’s psyche after the rape, continuing to offer details so intensely right they feel privileged.

Garfein follows Mary Ann as she unsettles her life: quitting school, leaving her cloying, conformist mother, getting a job at a five-and-dime, and renting a room in a cheap boarding house. Garfein and cinematographer Eugen Schüfftan render New York City a looming nightmare world of encroachment. We can almost smell these people and discern their body heat, as we’re in unmooring sync with Mary Ann’s newfound disgust with the human animal. There’s menace everywhere in the expressionist pockets of darkness in the boarding house and along alleyways. Even the rain fails to cleanse or heal Mary Ann. Running in a storm, she encounters an old man who’s either homeless or dead. Driven to the brink of dislocation or hopelessness, she walks along the Brooklyn Bridge in a zombified state, the shimmering water beckoning her with its slivers of whiteness, a promise of sweet annihilation.

Just as we’re ready to be released from Mary Ann’s misery, by either her death or salvation, Something Wild morphs into something truly daring. Mary Ann is saved from suicide by Mike (Ralph Meeker), and it would have been so easy for the filmmakers to caricature him as a white knight, either as the sexless simpleton or the sensitive stud, and to have him restore Mary Ann’s trust in society. And Garfein plays with this expectation of the audience’s, expanding the film’s sense of space. The interior of Mike’s apartment, clearly a stage, is open and roomy, offering pointed reprieve from the cramped, hot stickiness of Mary Ann’s plight in the boarding room and the five-and-dime.

Mike, though, proves to be more disturbed than Mary Ann, locking her up in his apartment, which exists at the end of a subterranean hallway that suggests a mythological labyrinth, rendered by Garfein and Schüfftan in poetically cramped angles. This association is affirmed when Mary damages one of Mike’s eyes, turning him into a kind of cyclops. Even at this point, it would have been easy to end Something Wild on a reassuring note, having Mary face and conquer Mike as a pat way for her to confront her rapist by extension. Instead, she marries Mike, voluntarily, after he sets her free.

The film’s ending is probably more shocking today. We’re now pressured to be well-mannered and above reproach as atonement for our ongoing sexism, even at the expense of acknowledging the distortions and mysteries of human nature, especially desire and longing in extremis. Contemporary films are so interested in asserting a woman’s “agency”—so as to pass the Bechdel test or score the right grades on the newest battering ram of think pieces—that they often forget to make their women actual characters, prone to human irrationalities that might refute an ideal political agenda.

Mary Ann is torn from her life by an atrocity that reveals existential fragility. Like many survivors, this knowledge separates her from society, marking her in her mind as a damned “other” incapable of discussing her past. This is a sensation with which Garfein, a Holocaust survivor, is familiar. Mike can smell this otherness on Mary Ann, sensing a kindred soul through the scrim of his own damage. His awareness of this alienation is enough for Mary Ann, possibly representing a potentiality for an escape from her figurative netherworld back to the harbor of the living. Or maybe none of these motivations are true, forged, instead, by this critic, who’s trying to assemble psychological shards into a meaning that’s disturbing yet reassuringly coherent. We don’t know what’s in Mary Ann’s mind, and Garfein and Baker don’t pretend to. They follow their story to an instinctual, seemingly inherent emotional destination—to a place of wildness, ungoverned by canned predetermination, where the pretense of black and white is a cruel joke.

The image abounds in an immersive hyper-clarity that’s important to a film concerned with someone who’s intensely averse to touch. Textures are vividly defined, particularly the bare skin of the protagonist as well as the clothes of oppressive city dwellers. The contrast between the blacks and whites is extraordinary, underlining the advanced, ambitious artistry of the film’s compositions, which abound in figurative deep-focus shots that are clearly indebted to the films of Orson Welles. The monaural soundtrack informs Aaron Copland’s score with a bright, intentionally harsh vibrancy, while underscoring the minute flourishes of the film’s intricate diegetic soundscape. A beautiful and essential restoration.

Two supplements bracingly contextualize Jack Garfein’s pivotal involvement with the Actors Studio, including his work with Elia Kazan, Stella Adler, Ben Gazzara, and many others. As scholar Foster Hirsch informs us in a new interview recorded by Criterion, Garfein was the first director to work with the group, recognized for his ability to coax truthful performances out of his casts. This reputation is directly affirmed by the best featurette: nearly 40 minutes of footage assembled from a couple of actors’ workshops with Garfein in 2014, in which the legend waxes commandingly on the acting art, while offering astute observations on specific exercises. Most memorably, Garfein pinpoints the hesitation existing between a couple when they debate on whether to diverge from the strictures of an assignment and let their instincts lead.

A new interview with Carroll Baker establishes the underrated breadth of her career, which included collaborations with legends such as Tennessee Williams, James Stewart, and Clark Gable. Throughout her career, Baker was vexed with a dilemma that’s all too common of female actors: her sex appeal. If she overplayed it, she might’ve been typecast, and if she underplayed it, she might not get to work. Eventually, Baker embraced full carnality in The Carpetbaggers, after long resisting a return to the sexuality that she mined in Baby Doll. Baker’s recollections are tough and casually provocative, including her insistence that the studio system was kinder to women than the modern age of celebrity freelancing (an assertion also famously proffered by film critic Molly Haskell). Rounding out this terrific, unusual package is a new interview between Garfein and critic Kim Morgan, an influential modern champion of Something Wild, and an essay by critic Sheila O’Malley.

This is a gorgeous and important restoration of a neglected rape melodrama that deserves immediate admission into the canon of great American films.

Review: Tate Taylor’s The Girl on the Train on Universal Blu-ray