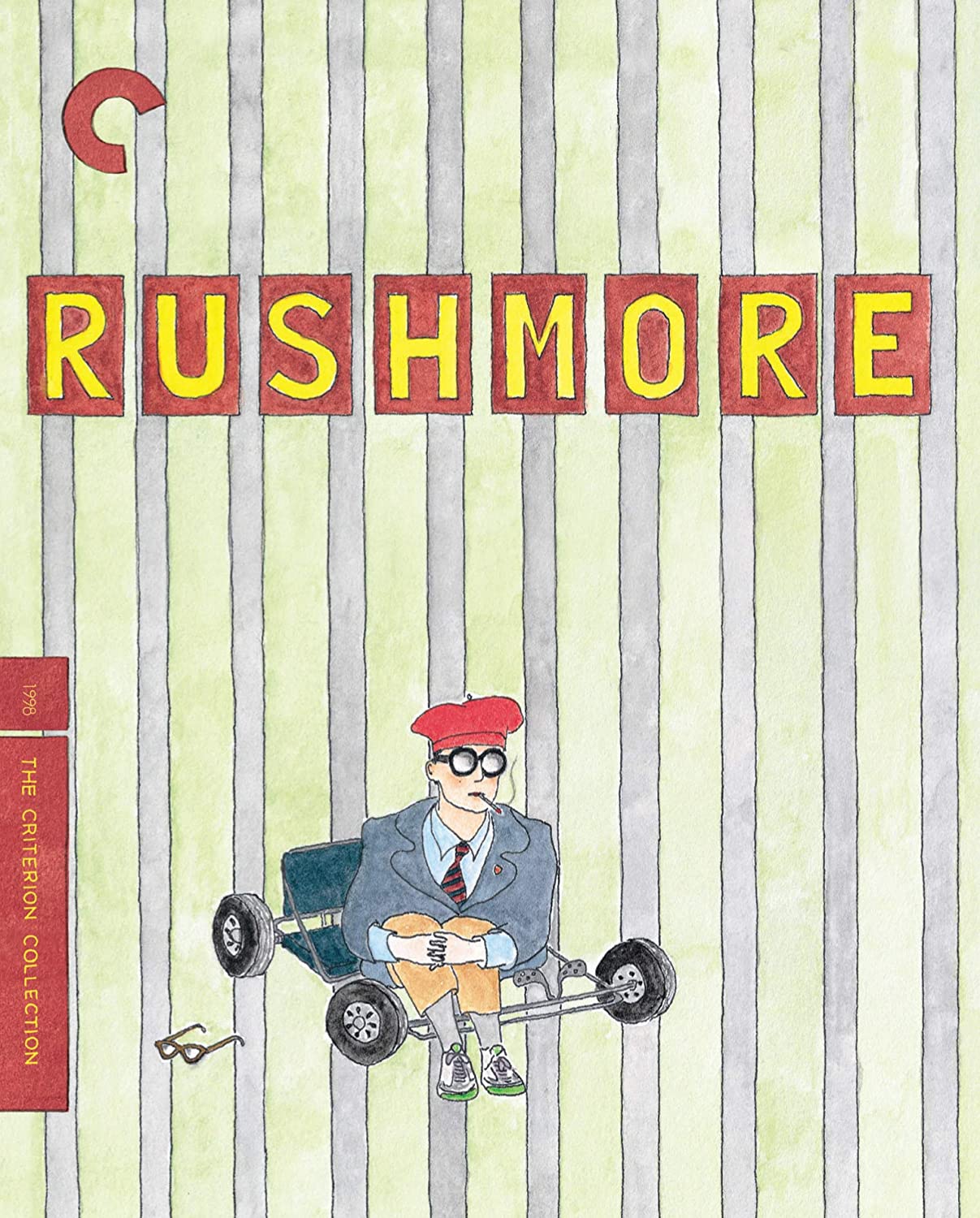 Wes Anderson’s Rushmore begins with a dream. Max Fischer (Jason Schwartzman, in a career-defining performance), bespectacled and with eyebrows as thick as a coniferous forest, fantasizes about becoming the hero of his class at the titular private school by solving an impossible equation that has stumped both his teacher and his teacher’s MIT professor, in perfect calligraphy no less. He’s swept off in a swarm of adoring peers before awaking to Rushmore’s weekly chapel sermon, which is being read by Herman Blume (Bill Murray), a local industrialist and father of two Rushmore students, a pair of bullying, crude, and crimson-haired twins.

Blume is essentially what Max dreams of being: a wealthy, charismatic man of experience and pragmatic knowledge whose social agenda and self-deprecation are nicely summed up when he tells the Rushmore students to “take dead aim at the rich kids.” But then, Max, when introduced to Blume post-sermon by Rushmore’s dean (a superb Brian Cox), turns out to be something like a dream to Blume, or, more correctly, some enchanting ghost of what Blume remembers himself as in his youth. They make quick friends, despite the gap in age, but soon find themselves in an unlikely war over a woman’s affections: that of Rushmore teacher and widow Rosemary Cross (Olivia Williams).

Like Blume, Rosemary is drawn to Max because his immense ambitions stir up memories of something she lost (her late husband), and in a way, it’s the recognition of a cumbersome sense of loss and grief similar to her own that brings her into Blume’s arms. Max, in fact, is representative of many things, not the least of which being Anderson in his youth, but it’s to Anderson’s credit, and the film’s co-writer, actor Owen Wilson, that this ostensible ghost story is told from the ghost’s point of view. The focus of the film—Max and the fussy emotional and physical turmoil he puts himself through in the hopes of invoking his own fantasy of being a great man without the benefits of tragedy or life experience—forms the core of this ingenious, wholly sincere, and deeply personal comedy.

Not only is it a comedy, but it’s very much a comedy of adolescence, in ways not unlike an inverted, far more stylistically daring The Graduate. A great deal of Max’s turmoil derives from his obsession with status, a trait that outs his delirious, hilarious sense of maturity and knowledge as a wobbly act birthed of pure adolescence. His friends often segue into enemies, and vice versa, because of this obsession as well, none more humorous than his quasi-mentorship of Dirk (scene-stealer Mason Gamble) and his glacial romance with Margaret Yang (Sara Tanaka). But it’s also prevalent in the way he keeps his father (a first-rate Seymour Cassel) at arms difference, and the way he treats one of Rosemary’s beau, a surgeon played by Luke Wilson.

These relationships and arrangements are consistently augmented but never lost as the film progresses, and if nothing else, Anderson is an astounding practitioner in his ability to not only balance a menagerie of lonely, lovely souls but to evoke a constantly fluctuating private life for nearly every one of them. The actors respond robustly by suggesting unique, amazingly varied inner lives for their characters and no praise is enthusiastic enough to describe the pleasure of watching Murray and Schwartzman battle it out, each wrestling with the physical approximation of their inner demons.

There’s no lack for guffaws in their war, but each expertly crafted scene feeds into something bigger that plays to the heart of Rushmore, that of an insatiable appetite for creation and invention and a thunderous artistic passion. Both Wilson and Anderson have commented on the fact that, though Rushmore is something of a fable, many of its facets are drawn mainly from their youth: Along with innumerable other personal touches, the Rushmore of the film is actually St. Johns, the Texas private school that Anderson attended as a child. All but helpless in academia, Max literally can’t stop creating, much like the young Anderson who constantly put on school plays and shot 8mm shorts. Unlike Anderson, however, Max’s habits seem to be, in part, spurred by the passing of his mother, whose absence hangs heavy over the entire film. What Rosemary and Blume see in Max is almost hysterical ambition, a need to make and do everything, from bee-keeping to fencing to, most prominently, theatrical adaptations of and variations on popular films.

Death, disappointment, and adulthood have seemingly dissolved the ambition and romance with life in Blume and Rosemary, but they see and feel both in Max, who uses them to fabricate an entire Oedipus complex for himself that even he’s seduced into. The gaps that exist between who we hope our kids will be and who they eventually become, and who we think our parents should be and who they truly are, have always been favorite themes of Anderson’s, and here these themes unfurl beautifully within the perceived love triangle between Max, Blume, and Rosemary. By the end of the film, with the Faces’ bemusedly heartbroken “Ooh La La” putting a fine point on it, Rosemary, Max, and Blume can reconcile with a final dance, and Max has at long last acquired something that he has been feigning for his entire life: wisdom.

Criterion’s 1080p transfer brings out the best in Wes Anderson’s attentive, evocative work. The film itself has a singular sense of color and each shade looks amazingly pronounced in this transfer, with special attention paid to blues, greens, and reds. The black levels are excellent and inky (see the confrontation scene in Blume’s car outside Rosemary’s house) and the overall sense of detail and texture is consistently astounding, a particularly impressive feat considering the level of detail Anderson packs into each frame. Any evidence of digital manipulation is fleeting, if not non-existent. The audio portion is also brilliantly handled, with dialogue crisp and out front and Anderson’s routinely wonderful soundtrack selections beautifully mixed and balanced with sound effects, atmosphere, and Mark Mothersbaugh’s excellent score.

A hugely entertaining and informative audio commentary featuring Owen Wilson, Anderson, and Jason Schwartzman leads this tight gathering of supplemental material. I’m a huge fan of the commissioned shorts that Wes Anderson made for the MTV Movie Awards and they are all here, along with some fascinating footage from casting auditions, including Schwartzman’s original audition. Dave Kehr’s piece on the film is short but sweet and expertly written, and the video interviews from Charlie Rose with both Bill Murray and Wes Anderson are fun and moderately insightful. For my money, the making-of featurette is too brief, but it’s an otherwise enjoyable 17 minutes. Storyboards, posters, drawings, and a trailer are also included. A solid gathering all tolled.

Review: Ghostbusters: Afterlife Dispiritingly Peddles Nostalgia for Its Own Sake