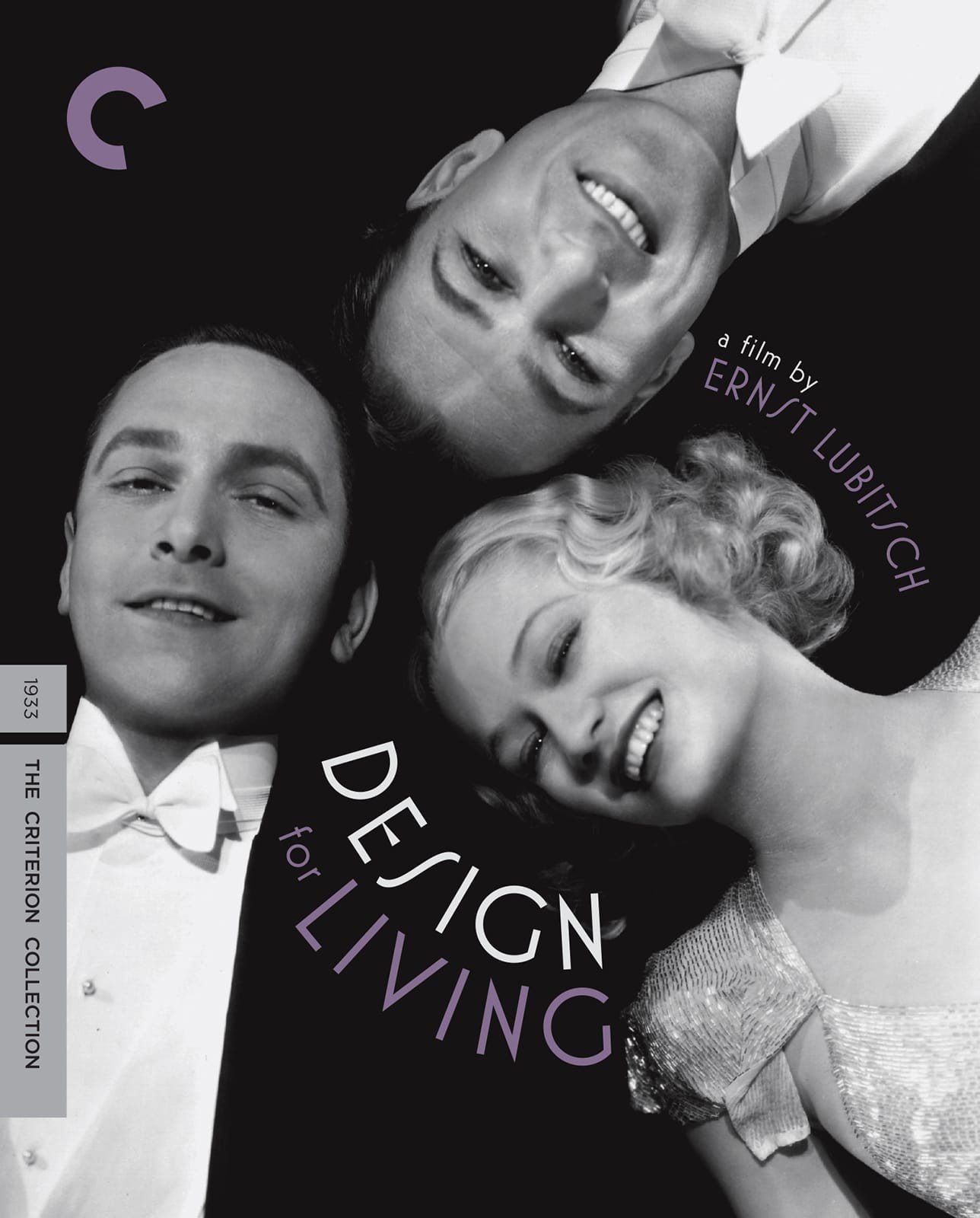 It would likely disappoint some contemporary viewers of Ernst Lubitsch’s 1933 comedy Design for Living—and put others at ease—to learn that the verb “to make love to” was not a popular American euphemism for intercourse until the mid ‘50s. Before that, the phrase could denote practically any sort of amorous attention—a purplish gradient running from polite and courtly to hot and bothered, from flowers and smiles to interrupted groping and sighing. It was, if we can forgive a sexualized metaphor, a sort of sly, blank space to be filled by context and the imaginative listener’s discrimination.

With this idiomatic etymology in mind, Design in Living becomes franker than ever: When the characters say “sex” they mean sex, without quotation marks. But the bohemian configuration it limns may be less casual than it appears. Artists Tom Chambers (Fredric March) and George Curtis (Gary Cooper) have “made love to” their Tiger Mom-like muse Gilda (Miriam Hopkins) when she decides to move into their expressionistically shabby Parisian flat, but they haven’t, ahem, slept with her yet—which is why they’re so willing to attempt a celibate three-way. This “gentleman’s agreement,” of course, turns out to be more difficult to uphold than initially anticipated. And the stakes for these three, who at this point in the story are still “unknown” to one another in the bibilical sense, are enormous.

The niceties of this delicate balance are key to understanding Tom’s emotionally ashen response to its disruption. When he ventures to London to see through the production of his first play and then learns that George and Gilda have consummated the hitherto unconsummated, he’s emasculated and down-trodden. (It doesn’t help that he gets the news in front of his elderly, librarian-like assistant, who balks at dictating his punchy slang.) The narrative is a jokey pathway toward this ultimate betrayal, and its, ahem, tit-for-tat retaliation; these are enclosed, hierarchy-enforcing sex acts in what would otherwise be a fluid and egalitarian, if teasingly tense, environment. Because of the bargain of the three-way, whoever has the girl is a thief, and whoever doesn’t is a quasi-cuckold.

This “sex-as-social-currency” reading makes further sense as a Depression-era reversal of fortune. Consider the crustily upper-crust ad man Max Plunkett (Edward Everett Horton), whom Gilda eventually marries after confusingly retreating from her flunky art boys. At the hilarious climax of this plot twist, the new bride and groom retire to their bedroom, and a lighting cue signals the transition from night to day. Max swiftly emerges, furious but timid, and kicks a potted plant with two phallic bulb peeking out of it that the couple received as a wedding gift. The sex act is discussed surprisingly freely in this adult landscape, yes, but engaging in it still comes at a price.

Due to the uncommonly risqué, if comically clunky, plot points described above, Design for Living is often considered minor Lubitsch and major pre-Code—but it’s more accurately major Ben Hecht. The storyline, “inspired” by Noel Coward’s partially autobiographical stage play of the same name but drastically rewritten, maintains an oddly proto-His Girl Friday cadence throughout. This isn’t always successful; March and Cooper don’t quite know how to treat lines that aren’t funny themselves but are rather meant to establish a comic rhythm, and you wonder if certain overlong scenes weren’t meant as placeholders for musical numbers that were never written. But the script was clearly important to Hecht’s development, and to the progression of cinematic comedy as a genre independent of silent clowns, George S. Kaufman’s Broadway, and the Marx Brothers. Lubitsch fills the screen with objects like the aforementioned potted plant and Tom Chambers’s broken typewriter; they aren’t gag props, but almost incidental characters themselves, with their own tragic and comedic weight.

The script, too, represents every limit of possibility within early Hollywood’s subject matter permissiveness. Put another way: The lack of innuendo drove the censors wild, but its perspective of human sexuality never quite oversteps the boundaries of tradition. Two men compete for the favor of the character played by Hopkins, who reprises her “comedienne of empowerment” from Lubitsch’s Trouble in Paradise, and she doesn’t allow herself to be penetrated by anyone she doesn’t love. The primary sexual freedom rendered on the screen is the freedom to confess—to express attraction, or to admit dalliances that will cause hurt. In one faux-feminist monologue, Gilda marvels at the luck she’s been given to be able to try various men on, like hats, and decide to keep two in her closet. And when March’s playwright succeeds in stealing away Gilda from Cooper’s painter for a night, the conversational results—an exchange of words and fists—are uncomfortably candid.

But ultimately, what’s most likeable about Design for Living is how the low-rent central menage-a-trois acts as a metaphor for the film’s own gawkiness. Cooper and March are just about as successful as comedians as their characters are as artists; we don’t feel like either one of them really deserves any success professionally or sexually. Glida, however, as Lubitsch’s counterpart, understands her boys as two halves of an irresistible composite, and she shepherds them into triumph with scolds, teases, sex, and hard-boiled eggs. Describing the scenario sounds like an old joke: Take a mediocre painter and a mediocre playwright and put them together, and you’ve got…well, double the mediocrity. But at least it’s sturdy, easily manipulated mediocrity.

Ernst Lubitsch and cinematographer Victor Milner create a downright dreamy expat’s world in Design for Living; Paris is all small corners, throw rugs, and spidery staircases, while London is a washed out, Art Deco heaven. The fact that the characters don’t change with their milieu is a lot funnier when the additional clarity provided by 1080p underscores just how dramatically their milieu does change from city to city and rags to riches. The soft lenses sparkle seductively and Gilda, draping herself across a bed to invite George’s gentleman’s-agreement-smashing embrace, looks deceptively pure and white against the dust-expelling comforter. Lubitsch exercises the same expressionistic extravagance here as he does in his musicals, and the seriousness of the visual beauty actually helps the jokes. The transfer is pristine aside from some damage in the final scenes, and the sound is a hell of a lot clearer than that of Criterion’s Trouble in Paradise disc, which sorely needs an upgrade.

Design for Living sports some of the strongest and most fascinating extras on any Criterion set this year. An interview with Joseph McBride and selected-commentary by William Paul read the film’s unconventional role in the universe of “the Lubitsch touch,” and there’s a 1080i transfer of the two-minute-long Lubitsch/Charles Laughton black-out from If I Had a Million. Best of all, Criterion’s included an entire production of the original stage play for British TV, allowing us to see by comparison what little of Noel Coward’s script wound up in the film. Interestingly, what might have inspired Ben Hecht most of all was Coward’s arrhythmic bon mots; what connects both iterations of Design for Living is their fearless sagginess. The booklet features a pop-feminist essay by Kim Morgan.

Though more of an anomaly than a blueprint, Lubitsch’s Design for Living is sexy in ways we’re still trying to, ahem, wrap ourselves around.