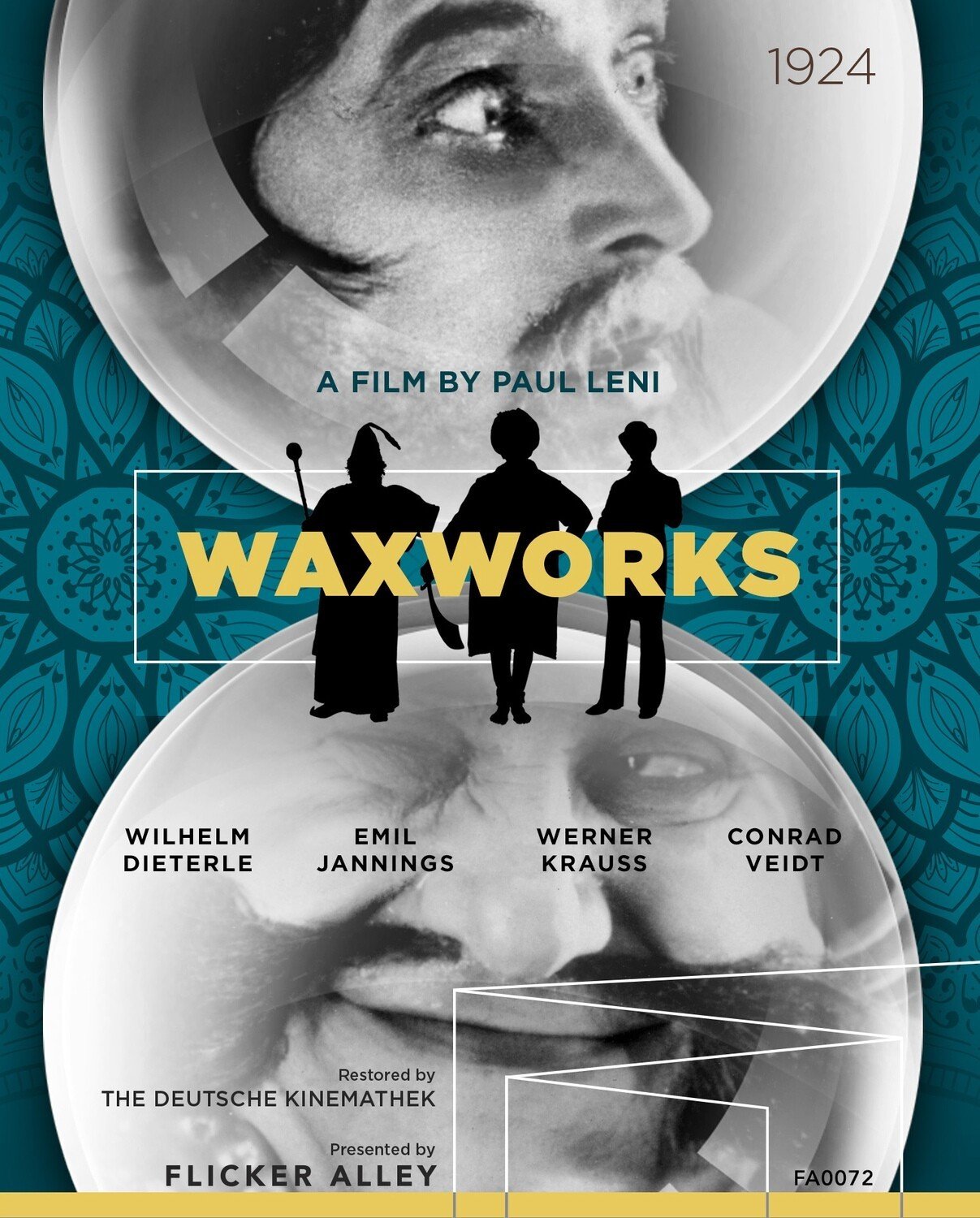 Paul Leni’s Waxworks is often considered the swan song of German Expressionist cinema. Its German title, Das Wachsfigurenkabinett, which translates to The Cabinet of Wax Figures, calls to mind Robert Wiene’s 1919 classic The Cabinet of Doctor Caligari, the quintessential work of the movement. Waxworks is also an early example of the anthology film pioneered by the likes of D.W. Griffith with 1916’s Intolerance and—more importantly, given the uncanny subject matter—Richard Oswald’s Unheimliche Geschichten from 1919. Generically speaking, Waxworks is a bit of of a hodgepodge, incorporating elements of ribald comedy, historical fantasy, and outright horror. But Leni and screenwriter Henrik Galeen manage these tonal shifts with total assurance, lending each segment its own particular and rewarding flavor.

The frame story has a young poet (future director William Dieterle) arriving at a carnival, distinctly redolent of the one in The Cabinet of Doctor Caligari, in search of a job at the wax museum. The proprietor (John Gottowt) hires him to write some lurid backstories for his exhibitions of Caliph Harun al-Rashid (Emil Jannings), Ivan the Terrible (Conrad Veidt), and Jack the Ripper (Werner Krauss). (Not coincidentally, the latter two actors were the stars of The Cabinet of Doctor Caligari.) The resultant segments play out in a narratively lopsided manner, diminishing in duration as they intensify their emotional register.

Interestingly, aspects of the wax figures work their way into the stories themselves. Art thus imitates life. The Caliph’s broken-off arm morphs into a severed limb. The automaton mechanism that animates Ivan the Terrible becomes the robotized nature of his madness. And Jack’s looming bulk insinuates itself into the poet’s dreamlife. Within each story, there’s a similar doubling at work. The Caliph has a wax dummy made to take his place when he sneaks out into the city at night. Ivan swaps roles and robes with the father of the bride, who’s then assassinated in his place. The entire final segment, in which Jack relentlessly pursues the poet and the proprietor’s daughter, Eve (Olga Belajeff), comprises layers of double exposures that work to thoroughly unmoor our sense of cinematic time and space.

Adding further to the bewildering process of duplication, Dieterle and Belajeff play different roles in each segment. In the Caliph’s tale, he’s Assad the baker, and she’s his wife, Zarah, whom the Caliph hopes to bed. In the second segment, he’s a boyar groom who’s thrown into the dungeon, so that Ivan can seduce his new bride. In the finale, the poet feels Jack wants to kill him and take the proprietor’s daughter away from him. The first two episodes represent the conscious insertion of reality into fiction. The last enters fully into the realm of dream, where these conflicts with tyrannical authority resolve themselves, much to the dissatisfaction of the poet, who ends up skewered by Jack’s blade. Luckily for him, it was only a dream, a notion Leni cleverly underscores by having Jack’s knife dissolve into the poet’s pen, thus tidily illustrating both the pleasures and pains of the human imagination.

Flicker Alley presents Waxworks in a new 2K restoration that’s simply stunning, a quantum-leap improvement over the Kino Lorber DVD from 2004. Clarity and depth are greatly improved, and the color tinting is bold and striking. Given the nature of the restoration, there are, of course, numerous artifacts still extant, but none so glaring as to be terribly distracting. There are two scores: a piano score by Richard Siedhoff and an instrumental track by Bernd Schultheis. Both are available in either Master Audio stereo or surround mixes. Each one imparts a different texture to the film, and both sound excellent.

Flicker Alley provides a handful of top-shelf supplements. The commentary track from film critic Adrian Martin is dense but meaty, peppered with quotations from influential film historians like Siegfried Kracauer, Lotte Eisner, and Thomas Elsaesser. Martin has a lot of interesting things to say about situating German Expressionist films in different contexts, each of which yields varied perspectives. An interview with Julia Wallmüller of the Deutsche Kinemathek covers the restoration process, the film’s release history, and differences between various cuts of the film, including the BFI version, from which the new restoration largely derives. With his usual aplomb, genre expert Kim Newman discusses the history of the anthology film, as well as subsequent films that were influenced by individual episodes of Waxworks. Also included is one of director Paul Leni’s Rebus-Films, a dizzying attempt to create a cinematic jigsaw puzzle that audiences could play along with in the theater. An illustrated booklet includes an essay on the film by Richard Combs, an overview of Leni’s career from Phillip Kemp, and further information on the restoration.