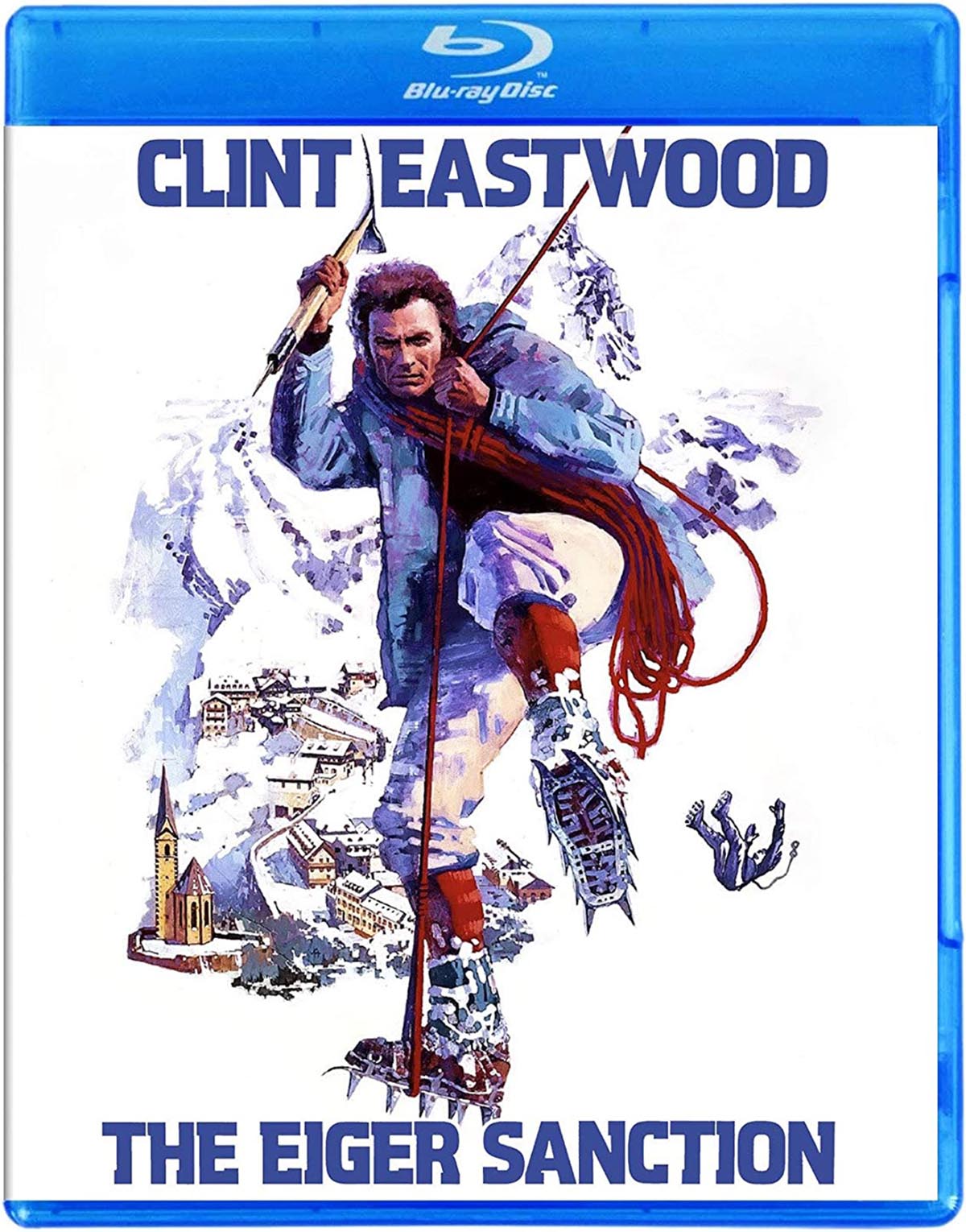 As much as the Bond films that its source material simultaneously pays homage to and parodies, Clint Eastwood’s The Eiger Sanction is a lavish tribute to scenic locales and beautiful human bodies. Its byzantine narrative spans the red rock spires of the American southwest to the breathtaking peaks of Switzerland and showcases Eastwood at a breathtaking physical peak of his own, running, rappelling, and romancing his way across each of these landscapes—and often doing so without a stunt double. He plays Jonathan Hemlock, a retired assassin turned turtleneck-wearing elitist, and he’s about to be pulled back into international espionage work for the federal government by an albino former Nazi collaborator known as Dragon (Thayer David).

The kinetic virtuosity and self-conscious sexual charisma displayed by Eastwood in The Eiger Sanction is right in line with his entrenched screen persona as a stoic alpha male. What’s less associated with him, at least before 1995’s The Bridges of Madison County, is the smug intellectualism that he ably flexes by way of Hemlock’s position as a classical art collector and general connoisseur of finer things, pithily exemplified when, wearing thick-rimmed glasses, he dismisses a piece of literary criticism as a “shabby piece of research, obscured by involuted style.” Such language feels calibrated as a playful tweak on Eastwood’s image, just as the film itself is frequently toying with our expectations of a titillating spy thriller, often by simply dialing up familiar qualities of the genre to the level of camp.

The film’s source novel, written under Rodney William Whitaker’s pen name Trevanian, is regarded as a burlesque of the unseemly representations coursing through the Bond movies, and Eastwood carries over the author’s characterizations while muddling the distance between irony and sincerity. One of the film’s heavies is the outlandishly effeminate Miles Mellough (Jack Cassidy), who calls his dog “faggot,” while Hemlock’s love interest is a black woman called Jemima (Vonetta McGee), a subject of bemused scrutiny for him the moment he hears the name. These provocations, and many more like them, make The Eiger Sanction one of Eastwood’s more unabashedly uncouth works, though the homophobia and racism they would seem to espouse cannot be so easily written off as such, since Hemlock is himself emasculated more than once throughout the film, while Jemima emerges as a more complex and empowered character than her stereotypical naming would suggest.

Similarly difficult to pin down is the film’s take on Cold War intervention and American foreign policy, which skirts the rah-rah jingoism that many who’ve bought into the caricature of Eastwood as a cranky conservative would be eager to foist on the director but which also allows room for patriotic assignment done only in the name of brotherhood. Hemlock’s former WWII pal, Ben Bowman (George Kennedy), is slotted to oversee the treacherous climb that will enable him to execute Dragon’s “sanction” (or assassination) in Switzerland, and even when an early act of deception by Jemima, Dragon’s employee, exposes the shadiness of the entire deal, Hemlock is ultimately sucked back in by the prospect of some fraternal tomfoolery.

The film’s arresting middle section sees Hemlock and Bowman embarking on training sessions in Monument Valley, then cracking beers and ogling swimsuit-clad women back at Bowman’s Zion National Park ranch. A strict adherence to plot necessity might have kept this section under 20 minutes, but instead it stretches to a leisurely 40, and it’s clear that this is where Eastwood’s heart lies. Simple scenes—a workout montage and a car chase, for instance—become occasions to soak in the spectacular vistas of the location, with helicopter shots of Hemlock’s orange Ford Bronco cutting wildly across a Monument Valley off-road trail achieving a painterly beauty. It’s also here where Eastwood leans fully into his charisma, using swaggering body language and wry insinuation to oust Miles Mellough, then finding the same instincts backfiring when he’s nearly killed by a hired seductress (Brenda Venus).

The fraught behind-the-scenes alliances come to a head when Hemlock and Bowman decamp to Switzerland’s monumental Eiger mountain to join an expedition led by a Swiss team that Dragon has alleged contains the man Hemlock is to slay. With so much exposition, it’s easy to lose the thread in The Eiger Sanction, but no matter, since there’s so much to look at around every corner—and the Eiger itself provides the film’s most extraordinary spectacle.

With special assistance from a team of mountain photography consultants, cinematographer Frank Stanley frames Hemlock and company’s ascent in a number of dizzying deep-space compositions, their often-wonky center of gravity practically vertigo-inducing, which in turn inspires great respect for the athleticism of the performers. This muscular climax, which at one point finds Hemlock dangling from a rope against the distant backdrop of Grindelwald, was the main source of acclaim upon The Eiger Sanction’s release and remains potent evidence of the visual lucidity and highwire ambition of Eastwood’s filmmaking, qualities that undoubtedly shine through the film’s more inflammatory elements.

Kino’s transfer is hit or miss, generally pulling superb detail out of daytime exteriors while suffering in the darker scenes. One shot in the Zurich-set credits sequence is so murky that we can barely see what’s happening. To be fair, it’s tough to discern whether that flaw is inherent to the original print or not, but in several other cases nighttime sequences have the muddy quality often associated with shoddy digital conversions of ‘70s film stock. Fortunately, key passages—such as the Zion National Park section and the climb at the Eiger—are free of such blemishes, and the natural splendor of the locations is aided by pristine sharpness and lush color. Meanwhile, there’s not much to complain about with regard to the clear and even sound quality, with John Williams’s score commanding a particularly shimmering spot in the mix.

Replete with trivia about the cast and crew, including some fine-grained detail regarding Williams’s score, film critic Nick Pinkerton’s copiously researched commentary track is the standout here. Pinkerton makes a strong case for this often-maligned film as a work of “dunderheaded poetry” and for Clint Eastwood as a great populist artist. Beyond that, there’s a pair of interviews: a newly shot piece featuring Reiner Schöne, who recalls the comfort he felt under Eastwood’s direction despite the treacherous circumstances, and an inconsequential archival clip in which Heidi Brühl is interviewed by a flirtatious Italian. A few original marketing materials—a long promotional reel and TV and radio spots—round out the package.

“Dunderheaded poetry” or distasteful Bond rip-off? Kino’s The Eiger Sanction Blu-ray invites us to reassess an undervalued oddball from the height of Clint Eastwood’s stardom.