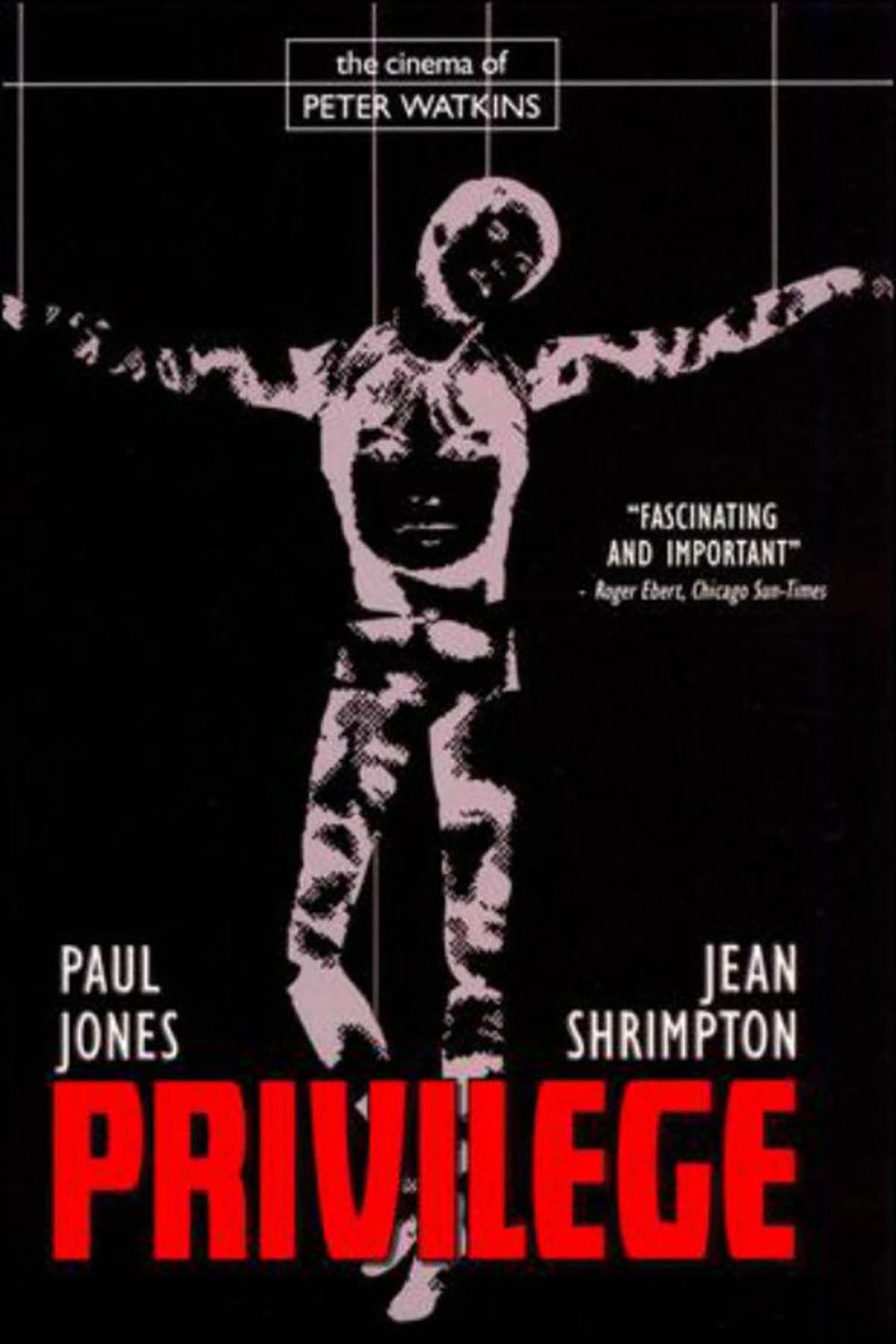 The familiar 1960s sight of screaming, slackjawed, and weeping young girls reacting to a beloved pop music idol on stage appears in an early scene of Peter Watkins’s Privilege, but it’s a teen-dream spectacle with a twist. Instead of shaking his hips or belting out three-chord paeans to puppy love, Steven Shorter (Manfred Mann’s singer Paul Jones) enacts a social-rebellion playlet that finds him handcuffed and imprisoned in a cage by theatrically grinning policemen. “Set me free,” he pleads to the audience over the rumbling riffs of an unseen band, his arms outstretched in supplication, wrists bleeding (for real). Indulgently liberated from his cell, he rips at his shirt in anguish, absorbs punches and kicks in a fight with the cops, and stumbles off stage as a mini-riot commences. In this Britain of “the near future,” a hushed narrator (Watkins) informs us, Shorter’s meteoric career has benefited from a one-party government’s directive to entertainment companies that they should channel the aggression of young folks with their product and “keep them out of politics.”

Watkins, in the wake of controversy and acclaim (including an Oscar) for his BBC-sponsored nuclear-fallout faux documentary The War Game, did not originate Privilege but used rewrites and improvisation with the cast to mold it into a far less conventional, symbol-heavy “youth movie” than Universal Pictures could have expected. Working on a rare occasion in color and 35mm, he produced a commercially alienating satire of state, faith, and pop whose transgressions can be best understood in the context of its era. The brouhaha over John Lennon’s claim for his band’s bigger-than-Jesus renown coincided with Privilege’s shooting in the summer of ‘66; Watkins’s film sees the devotional passion and atavistic lust stirred by pop stars as entirely compatible with prostration before “God and flag,” and his poker-faced bureaucrats and bishops set about co-opting musical “revolt” with chain-store commerce and stadium revivals.

The pop star as ideological cipher (and tool of the Man) here seems to be the cinematic midpoint between the media messiahs Lonesome Rhodes, created by Budd Schulberg for A Face in the Crowd, and Howard Beale in Network—both more conventionally entertaining rabble-rousers than Shorter, who as embodied by novice actor Jones wears his self-hatred with a sickly smile or a grimace suited to gastric distress. (Rhodes and Beale’s initial sermons burned in their hearts; Shorter knows he’s a fraud from the start.) An iconic face of the era, supermodel Jean Shrimpton, is cast as a portrait artist who becomes both Shorter’s lover and the vehicle to his turning against his paymasters. Her occasionally flat line readings and quiet, tentative physicality don’t suggest a catalytic conscience-raiser, but the pair have a touching, stranded quality in their intimate scenes—the ones that lie furthest outside Watkins’s usual neo-doc aesthetic—that works for their increasingly engulfed characters.

Before Shorter’s sponsors decide that he needs to transform his image from persecuted jailbird to repentant Anglican (in the arena show that is the movie’s second and last performance set piece), Privilege has some fun with Shorter’s coterie: His jokey press agent (Mark London, fast and funny) and a fossilized record-label exec (Max Bacon) share a strategy-swapping scene in a washroom that nicely anticipates This Is Spinal Tap. But aside from this lampoonery of professional leeches (and a broad sketch of a TV ad aiming to relieve a U.K. “apple glut”), Watkins prefers to keep the major power players’ ominous manipulations in his sights. In the baldest “message” scene, a Mr. Big tells Shorter as they look down on London from an office rooftop that the hoi polloi will never fulfill the liberal myth of egalitarianism through education, but must be led into “a fruitful conformity” by the star’s wattage.

The showbiz glitz, while essential to the film’s concept (and budget), works against the director to a degree in both tone and performance. When the desperate idol finally protests, “I’m a person!,” it’s not entirely clear he still is. In Shorter’s singing-evangelist debut, Jones is eclipsed by a Byrds-like band doing a chiming-guitar arrangement of “Jerusalem.” Ruthless fascists would likely bail on this depressed mascot long before these villains do.

While not primarily intended as prophecy, Watkins’s tale of Shorter’s reign and fall has resonances of celebrity activism from Bob Geldof to globe-hopping lobbyist Bono, as well as post-9/11 country-hit jingoism and Kanye West and the Dixie Chicks’s fussed-over smackdowns of George W. Bush. As for Privilege’s conceit of totalitarians playing puppetmaster to the nation’s entertainment industry, it remains intriguing but too elaborate for the early 21st century. Corporate-marketed pop spectacle alone seems sufficient to keep millennials distracted from the substance of politics, wishful collegians’ projections upon Barack Obama notwithstanding. In his subsequent Punishment Park, Watkins addressed police-state tendencies in the contemporary West more directly, this time in America.

A 26-minute vérité short about the circus surrounding early-‘60s pop crooner Paul Anka, Lonely Boy, was a major source for Watkins in creating Steven Shorter’s milieu, and it’s the chief supplement on the disc. On the verge of turning 20, Anka appears to be the opposite of Privilege’s neurasthenic mess, barking out backstage orders to his staff, plying the owner of New York’s Copacabana nightclub with gifts and flattery, and coyly planting kisses on the cheeks of adoring fans nearing collapse. The purity of his manager’s delusion that Anka will be the “biggest star ever” is such that Watkins places some of the flack’s hyperbole directly into the mouth of Shorter’s agent in Privilege: “God has given you a gift that he hasn’t given anyone in 500 years.” Given the Anka camp’s facility for inflating a writer-singer of schlock into a burgeoning superstar, the then-imminent British Invasion has never seemed more of a deliverance.

Watkins contributes a “self-interview” in the disc’s booklet, protesting that critics have insufficiently grasped Steven Shorter as “an extended metaphor” for the excesses of modern capitalism and consumerism. In an excerpt from his 1979 book on Watkins, Joseph Gomez details Privilege’s pastiches of Lonely Boy and Triumph of the Will and the misunderstanding and anger with which the press greeted its release. In a new postscript, Gomez reevaluates the film’s echoes in today’s pop-political crosscurrents. An essay by Barry Keith Grant analyzes the Anka documentary’s investigation of pop-idol construction and the control of adolescent desire.

Though Watkins delivered sharper countercultural-themed films later, Privilege had the jump on Easy Rider in telling a generation that they were going to blow it.