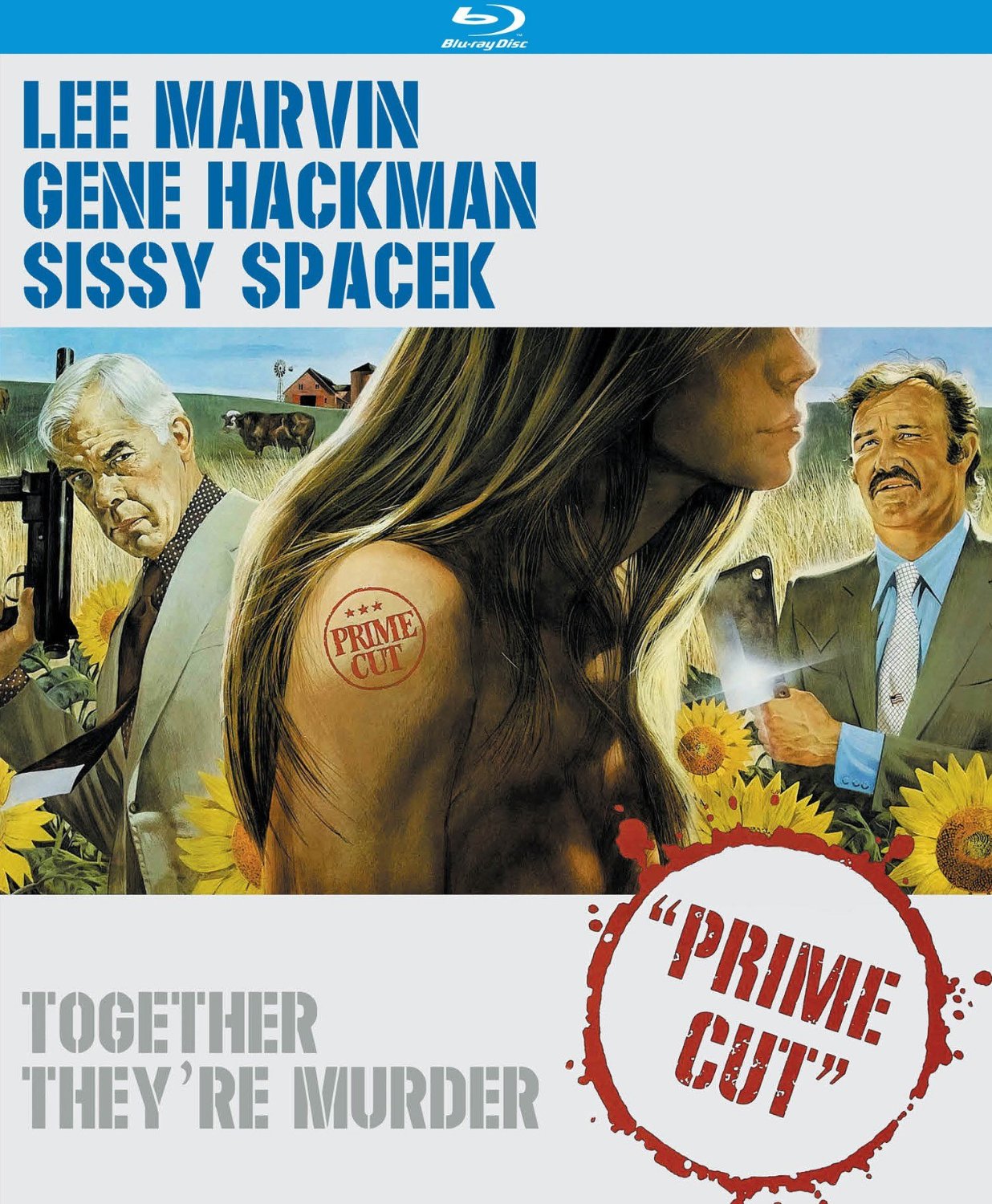 Michael Ritchie’s Prime Cut never entirely recovers from an early botched opportunity. Up until then, Ritchie effectively primes the audience for the reveal of the film’s big bad, seemingly eavesdropping on characters in a Chicago bar as they trade exposition pertaining to Mary Ann (Gene Hackman), the owner of a meatpacking plant who uses his business as a front for running drugs and whores. The trouble is that Mary Ann’s supposed to pay up to some folks in Chi-town, who claim he owes them half a mil, and that’s where enforcer Nick (Lee Marvin) comes in, swinging down to the former’s fortress in Kansas City in a limo fully decked out with guns and expendable goons. Nick and Mary Ann have a history, of course, working for the same bosses, sleeping with the same gold-digging henchwomen. After first stopping at an atmospherically sleazy flophouse, Nick walks right in on one of Mary Ann’s cattle calls, where he keeps drugged sex slaves in pens, treating them quite literally as livestock. (This is the film’s most perverse and resonant image.) Mary Ann is smugly talking business with hangers-on, eating a big, steaming pile of spicy, fried beef guts, when Nick saddles up and tersely taunts him as only a Lee Marvin character can. And then, splat. They go their respective ways, Nick stealing a slave, Poppy (Sissy Spacek), from Mary Ann out of sympathy for the woman’s drug-induced stupor.

The build-up to this encounter, which includes an unnerving opening credits sequence that appears to show real cattle being grounded up into sausage, is piffled away by the abject pointlessness of Nick and Mary Ann’s initial re-meet-and-greet. One clearly doesn’t expect the two to kill each other in this scene, but there’s a reasonable expectation that Mary Ann will capture Nick, or that one of them will evade the other’s murder attempt. Or something, anything, to shift Prime Cut into the next gear. When Al Pacino and Robert De Niro’s opposing characters merely have coffee at Heat’s halfway mark, for instance, the scene is understood as a joke on the actors’ respective iconographies as well as a sly acknowledgement of the pretense of civility that keeps the two men from immediately settling their irreconcilable differences. That sentiment is macho and derivative of hundreds of westerns, but it suits the film’s comic-book existentialism, elevating the stature of the duo’s parallel obsessions. The characters in Prime Cut, however, are all outlaws entirely within the parameters of their own shadow world. There’s no logic, and no punchline, to this delay of minor visceral gratification. The antihero and the antagonist walk away from one another simply because there are two acts left in the narrative, though everyone remains subsequently stuck on page one.

Consequently, everything that follows this sequence is unavoidably suggestive of treading water. Nick wanders around Kansas City, intimidates a few of Mary Ann’s associates, enjoys some sexy innuendo with a memorably outfitted moll (Angel Tompkins), assumes a creepy surrogate father/lover position in Poppy’s life, and generally screws around until it’s time to kill Mary Ann for real, in time with the climactic finish. Along the way, Ritchie offers self-consciously striking images of cars driving toward the foreground of the frame, and a well-staged shoot-out that’s set, with somewhat studied eccentricity, in a sunflower field.

Hackman, the film’s gaudy life force, is off screen for far too long during this stretch, though Marvin commands the audience’s attention with his elegantly unsentimental sense of curt physicality. (There’s a reason John Boorman spent so much of Point Blank’s running time trailing the actor as he marched down hallways. That walk contains more excitement than most conventionally elaborate set pieces.) But there’s little tension to anything that happens. Most of the film’s scenes are competently orchestrated on their own terms, but appear to exist in isolation, detached from every other surrounding moment. Prime Cut lacks the rude, propulsive intensity of Marvin’s best vehicles.

The image boasts appealingly soft yet clean textures that honor the film’s gritty early- 1970s-thriller aesthetic. Colors have a nice sharp punch, most notably the yellows of the sunflowers that figure in a key sequence, and the browns, which have a suitably unhinged aura of muddiness that’s purposeful and almost certainly true to the source materials. Flesh tones are well-shaded, often disturbingly so for a film concerned with sexual exploitation. The soundtrack is a little tinny in the non-diegetic department at times (Lalo Schifrin’s score could occasionally use more heft), but the diegetic effects in the action scenes display a strong sense of aural dimension, particularly the rattling of gunfire or the clinking and clanking of the machinery in a meat packing plant.

Kino does reasonably right by this relatively obscure 1970s sleaze-fest, which fails to entirely capitalize on the pairing of two of the great tough-guy actors of American cinema.