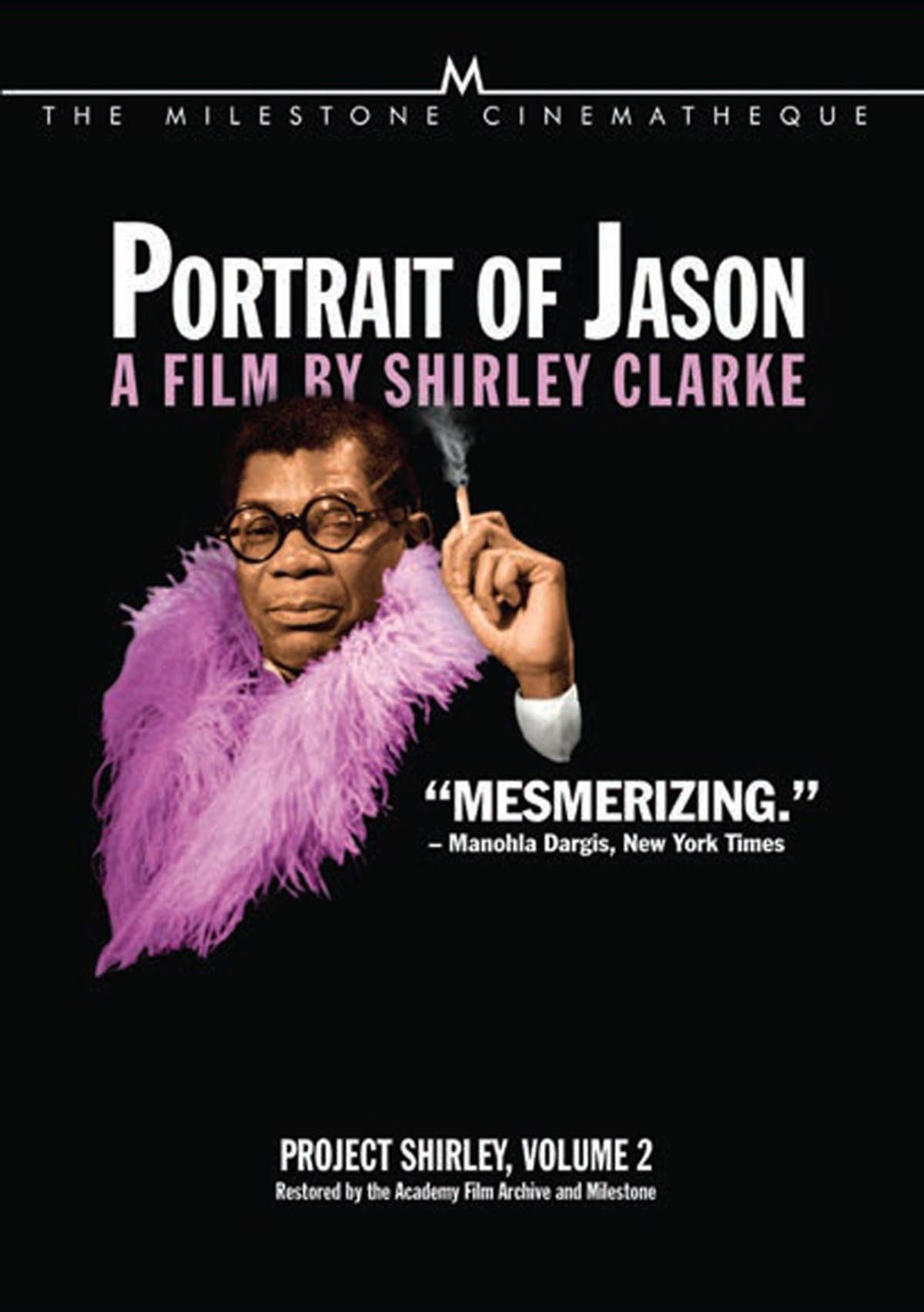 Jason Holliday, a black, gay street hustler, claims to have been “created in San Francisco,” but Shirley Clarke’s sensibilities are pure New York, where she played a significant role in establishing the Film-Makers’ Cooperative in 1962, alongside the likes of Jonas Mekas and Stan Brakhage. The midnight screenings of avant-garde films at the Bleecker Street Cinema in Greenwich Village throughout the early 1960s are infamous, but by 1967, Clarke’s Portrait of Jason was high-profile enough to premiere at the fifth New York Film Festival and be highly touted by the likes of Ingmar Bergman, who called it “the most extraordinary movie I’ve seen in my life.”

Bergman, however, wasn’t clear on exactly what made the film so extraordinary. Conventional wisdom would give the label to Holliday, who occupies, by himself, every on-screen second of the film’s 109-minute runtime. Yet, through formal intervention, Clarke is never absent, though her voice is only seldom heard off screen. Before Holliday even introduces himself, Clarke is heard giving the command to roll film. As Holliday speaks, focus pulls, at first only slightly augmenting his face, but gradually a full rack focus renders him a complete blur, though he continues to speak.

Immediately, Clarke imparts that even though her film’s title suggests something honorific, by no means is she guided by mere grandstanding or voyeuristic fascination. Instead, Clarke subtly takes emphasis away from Holliday during what would typically be a crucial moment of introduction by asserting that the subject is never in control of the frame, no matter how performative or theatrical the proceedings become. Indeed, the film could equally be titled Portrait of Shirley for the emphasis placed on dismantling a sense of cinema vérité as an objective mode of filmmaking. Although a self-professed portraiture, this is not Giorgio Vasari writing a hagiographic biography of Michelangelo, but nor is it Robert Flaherty staging sequences to seem natural in Nanook of the North. Clarke enters a comprehensively self-reflexive mode by tampering with temporality throughout, inserting abrupt edits, fades, and disruptive off-screen demands (“keep sound rolling”) to intimate that even though the film appears to be unfolding roughly in real time, there’s no way of knowing the lapses between Holliday’s stories of hustling, nightclub performing, and joking how he’s “been in love once, many times.”

These are crucial formal decisions which steadily reveal that Clarke’s interests are only nominally invested in Holliday proper, since his role as the film’s subject grows largely incidental to Clarke’s aims at undermining her own filmmaking process. That is, Holliday’s laughing, gesturing with a glass of scotch in hand, and movement throughout the film’s solitary room while telling stories (at times instructed by off-screen interviewer Carl Lee) fill the frame with the strident command of a one-man show, at least while Clarke allows the proceedings to unfold. Nevertheless, the “show,” as it were, is clearly being manipulated in order to engage peculiar measurements of dividing lines between filmmaker and viewer culpability. Holliday is on absolute display and that proximity seems to bother Clarke, who attempts to negate it in service of an aesthetic commentary, to an extent that her directorial hesitance to be deemed exploitative as a filmmaker is oddly amplified by these overriding concerns.

Portrait of Jason doesn’t exactly personify Norman Mailer’s concept of “The White Negro” by appropriating black culture for white consumption, although it’s difficult to suspend those critical inclinations since Clarke’s film plays up Holliday’s homosexual and African-American-specific idiosyncrasies (amplified by off-screen commands to “tell the story about…”) as preambles to later scenes of him crying, even going so far as to claim he “never really had any fun at all.” Clarke chose to make a documentary about Holliday for reasons not communicated within the confines of the film itself, so that lingering questions of motivation and intent are foregrounded throughout, with the relevance of Holliday’s litany of tales numbed by a filmmaker rather uninterested in their exterior implications or, at least, not seeking to address them.

The film is intended as performance for both Holliday and Clarke, but Clarke inevitably wins the battle, rendering a supposedly empathetic portrait of Holliday’s humanity subordinate to an intellectual exercise intended to intervene in filmic academic discourse more than meaningfully address American sociocultural politics. Finally, Clarke can’t provide portraiture of Holliday, because her film is adamantly suspicious of cinematic sincerity. As such, one can never shake the sense that Clarke would have preferred to go with a title reflecting her true interests, something like Portrait of the Cinematic Apparatus Laid Bare.

Milestone Films has gone to great lengths for this restoration, even helming a Kickstarter campaign to raise $25,000. The result is a gorgeous transfer, albeit afflicted with some blips and marks expected from the film’s original 16mm negative. Besides these minor afflictions, this transfer proves just how fortifying the restoration process can be, such that a once lost and unavailable film now reappears as Shirley Clarke intended. Jason Holliday’s dialogue is clear and easily audible throughout, as are the crucial off-screen screen requests, which are absolutely essential to grasping what Clarke is after here.

Milestone has provided a healthy plethora of extras, including numerous featurettes and restoration demonstrations to adequately supplement the film’s historical context. The highlights range from a featurette called “Where’s Shirley?” that provides an in-depth exploration of the film’s lengthy restoration process, to a clip of the 1967 film Underground New York, which finds Clarke explaining why she must live in New York to do her work and having a brief run-in with Michelangelo Antonioni. Finally, and most fascinatingly, there’s a nearly hour-long interview with Clarke shortly following the film’s release, in which she emphasizes her interest in promoting camera awareness as it pertains to cinematic truth and her sensitivity to the context of an interview, where a subject will speak and behave in a certain manner, based on who’s in the room.

Milestone Films has gone to great lengths to restore and contextualize Portrait of Jason on this superb Blu-ray, providing home viewers with all the tools necessary to evaluate Ingmar Bergman’s highest of compliments for themselves.