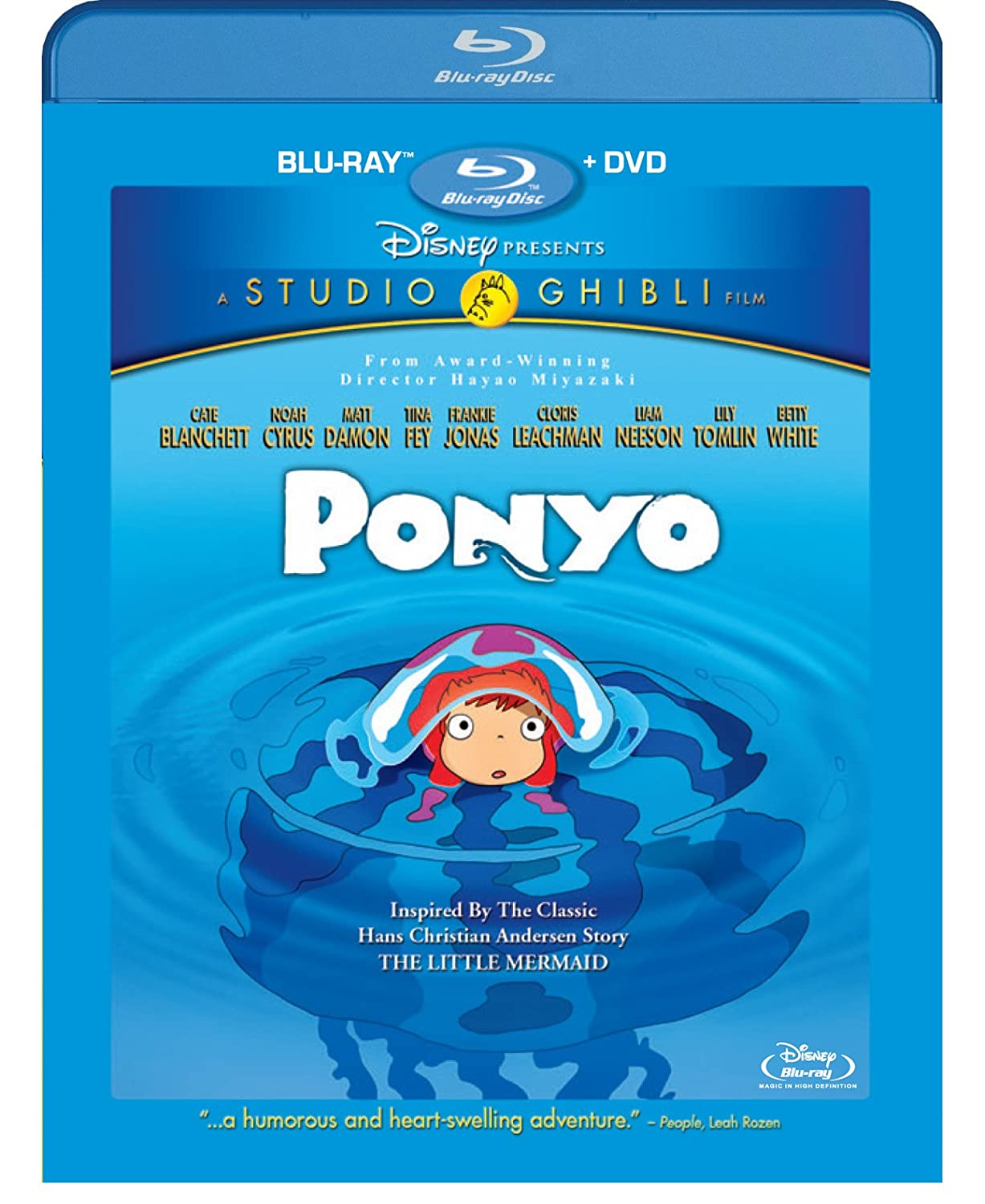 Until its fizzle of a finale, Ponyo, Hayao Miyazaki’s latest artisanally-crafted animé daydream, brims forth with an appealingly willy-nilly inventiveness pitched to a child’s sense of wonder. The story of a boy who finds and befriends the titular goldfish only to have that creature transform into a young girl, the entire film operates according to a childlike logic in which such things happen as a matter of course. “Mom, Ponyo came back and she’s a little girl now,” exclaims five-year-old Sosuke (voiced in the English language version by Frankie Jonas, younger brother of the singing trio) without the least hint of surprise, and Miyazaki creates an environment where to expect these random intrusions of illogicality is to begin to understand the way the world works.

Opening with a spectacular wordless sequence that establishes the order of the oceans—an androgynous male hag lords over the seas, birthing an endless series of red-bodied human-faced goldfish—as well as standing as a triumph of the crisp, hand-drawn animators art, the film then moves above the surface as Ponyo (Noah Cyrus, Miley’s younger sis) washes up onshore and immediately befriends Sosuke. The boy, who lives on an isolated seaside cliff with his mother and frequently absent father, quickly welcomes this odd-looking goldfish who, it turns out, possesses a store of magical powers. When Sosuke cuts himself, Ponyo licks the wound, healing it instantly, and the single ingested drop of blood effects a transformation in the goldfish, which gradually morphs into a school-age girl.

Although Ponyo provides a fit companion for the lonely Sosuke (the girl’s anarchic notion of play mixes well with her new friend’s more cautious sense of fun), her defection from the oceanic world upsets the balance of the planet and a tsunami is visited upon the seaside town, leaving an entire community submerged. This natural disaster allows Miyazaki to stage two of his greatest set pieces: a desperate car ride through the storm, complete with slanting lines of rain, Hokusai-inspired waves and a not-negligible dose of dramatic tension, and a post-storm boat ride where the young pair observes grotesque fish swimming through what used to be the town’s streets. In another side effect of the global imbalance (and another happy bit of invention), the waters on the high seas rise to the point where the gold disc of the moon beckons dangerously close to the ocean surface, its pull beckoning sailors into its orbit.

If the film finally seems a little confused about what direction it wants to take (early hints at social critique involving the stresses of the nuclear family and man’s deleterious effect on his environment, for example, are raised only to be dropped), then its lack of definite direction jibes well with its preteen viewpoint, which makes a virtue out of random and finely imagined bits of business. Only in the film’s ending does this lack of cohesion become problematic, as Miyazaki attempts a tidy resolution, papering over any narrative contradictions with some trite claptrap about the power of love. The result is a conclusion whose abruptness feels at odds with the leisurely unfolding of the rest of the picture. Still, if you can attune yourself to the film’s whimsical wavelength (exemplified by Sosuke’s description of his friend: “Her name is Ponyo, she likes to eat ham and she does magic”), there are some real pleasures to be had in Miyazaki’s latest, even if the film is clearly a far cry from the Japanese master’s previous triumphs.

Ponyo may be bottom-shelf Miyazaki as far as narrative structure and character development are concerned (compare the babyishly mystic antics of the titular aquatic life to the nascent feminine shrewdness the protagonist of Spirited Away displayed), but it contains what might be his most confident visual world to date, and on Blu-ray it’s resolutely brilliant. The smooth, brackish azures seem to capsize and swallow one’s eyeballs, and the delicate daubs of skittishly mobilized oranges and reds—the colors of only vaguely anthropomorphized miniature crabs and small fish that still possess more personality than most of Disney’s fruits des mer—jut out triumphantly from the screen’s diverse palette while enriching it. The film backgrounds, entirely created with impressionistic pencil strokes, are jarringly static at first, but the added resolution of high-definition eventually allows the foreground cels, which are so sharply pellucid every nuanced movement is deeply felt, to melt into them. The power of Miyazaki’s hyper-observant characterizations is undeniably dulling; though he hasn’t lost his respect for jejune magic, I still miss the manner in which he “got” kids so intimately and forgivingly in films like My Neighbor Totoro. But there’s genuine sorcery in the aesthetic of Ponyo, and it makes the stale plot entirely worthwhile, especially in high-def: It’s discs like these that further convince me that Blu-ray was made for animation. The DTS audio track is also remarkably detailed in the film’s more dramatic moments (the waves whiplash around you, utilizing every speaker when most efficacious), but the soundtrack isn’t diverse enough to truly maximize the power of 5.1. The superlative Joe Hisaishi score really shines though.

Most of the supplements on Disney’s Studio Ghibli releases are more geared to the younger crowd than anime aficionados, and Ponyo is no exception. Still, via the interactive “Behind the Studio” feature there are a handful of brief featurettes—most under five minutes—regarding the film’s production. My personal favorite is a discussion by Miyazaki about the character of Ponyo and the odd, Electra-esque relationship she has with her epicene, underwater carnival barker of a father, but most provide intriguing if not essential insight. Hisaishi’s exceptional score also gets a brief, appreciative featurette that’s well worth watching. And there’s a token conversation between Miyazaki and fanboy John Lasseter, who once again seems to succeed only at making the Japanese master markedly uncomfortable.

The plot may be anemic by Miyazaki standards, but on Blu-ray the vibrant seaside universe of Ponyo blows The Little Mermaid and Finding Nemo out of the water.

DVD Review: Lee Daniels’s Precious: Based on the Novel Push by Sapphire