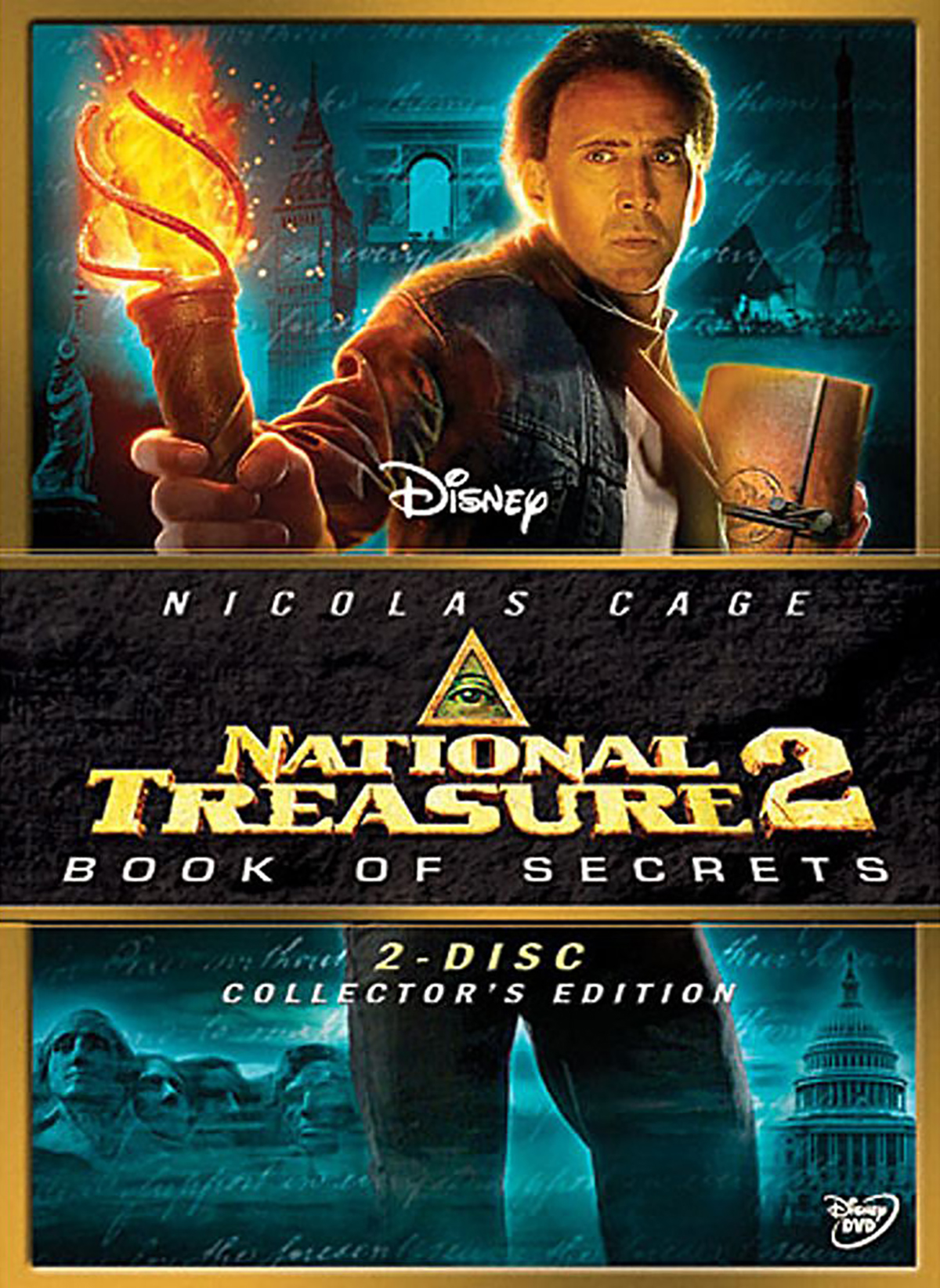 Even more than Disney’s Pirates of the Caribbean franchise, National Treasure: Book of Secrets is designed to emulate the effect of an amusement park ride, providing its customers a few cheap, fleeting thrills by jostling them about with disorienting, whiplash speed. As with its predecessor, John Turteltaub’s sequel involves treasure hunter Ben Gates’s (Nicolas Cage) quest to locate sacred American artifacts by deciphering puzzles whose clues are located on famous historical items. In this case, the coveted booty is the lost Native American City of Gold, the discovery of which would help refute evil Mitch Wilkinson’s (Ed Harris) claims that Ben’s great-great-grandfather was the mastermind behind Lincoln’s assassination (a theory backed up by a priceless missing page from John Wilkes Booth’s diary that Mitch only now saw fit to publicize).

That premise is the jumping off point for globetrotting nonsense involving Buckingham Palace, the Parisian Statue of Liberty, the Oval Office, and Mt. Rushmore, but since Book of Secrets doesn’t take its faux-intricate story seriously, there’s no reason this review should either. The narrative template employed by screenwriters The Wibberleys is to set up a ridiculously difficult task for Ben to solve with his cohorts—bickering ex-girlfriend Abigail (Diane Kruger) and wisecracking assistant Riley (Justin Bartha)—and then to have Ben immediately concoct the ideal, equally ridiculous solution and execute it with aplomb, a pattern that keeps things moving briskly at the expense of lending anything coherence or significance.

Of course, a lack of gravity is to be expected from such a trifle, but the degree to which Turteltaub’s film shuns nuance is somewhat startling, from its rapid-fire conspiracy theories that seem to have been invented on the spot, to its plethora of characters so cursorily conceived that they demand only autopilot performances from the legion of respectable (or, at least, once respectable) actors participating. Of course, I don’t mean to deny thesps like Harris, Harvey Keitel, and Jon Voight the right to cash in on their former glory. However, one would at least think that an actress the caliber of Helen Mirren—less than 12 months removed from Oscar glory—could find a more dignified way of selling out than swinging from a branch as the crotchety Jane to Voight’s goofy Tarzan.

Just because the print is clean doesn’t mean it’s good: Skin tones are pasty, orange or sickly depending on the scene, and in the case of the opening five minutes, all at once. Blacks are gooey, giving the whole thing the feel of a live-action comic book, which was probably the intention. The sound is an acceptable enough ear-sore.

It should probably not come as a surprise that Jon Turteltaub is as big a cheeseball as the movies he makes. On his commentary track, which he shares with Jon Voight, the director references the people who enjoy Nicolas Cage and Justin Bartha’s scene with the French police and how some have asked him, “Why are they wearing such silly helmets?” Who could possibly care so much about this movie and this inane little scene to harp on something so insignificant? More likely, Turteltaub probably just made the question up so he can delight in telling us that bike-riding police officers in Paris have to wear helmets. Imagine that! On disc two: five deleted scenes, the unfunniest bloopers and outtakes of all time, and a series of making-of featurettes covering such things as the titular book of secrets, the Library of Congress, and the London chase scene, which Turteltaub says is a great one because it’s always fun to see cars speeding through interesting places!

You know a film is going to be the pits when the director blows his artistic load on darkening the colors of the Disney logo and then boasts about it on his commentary track.