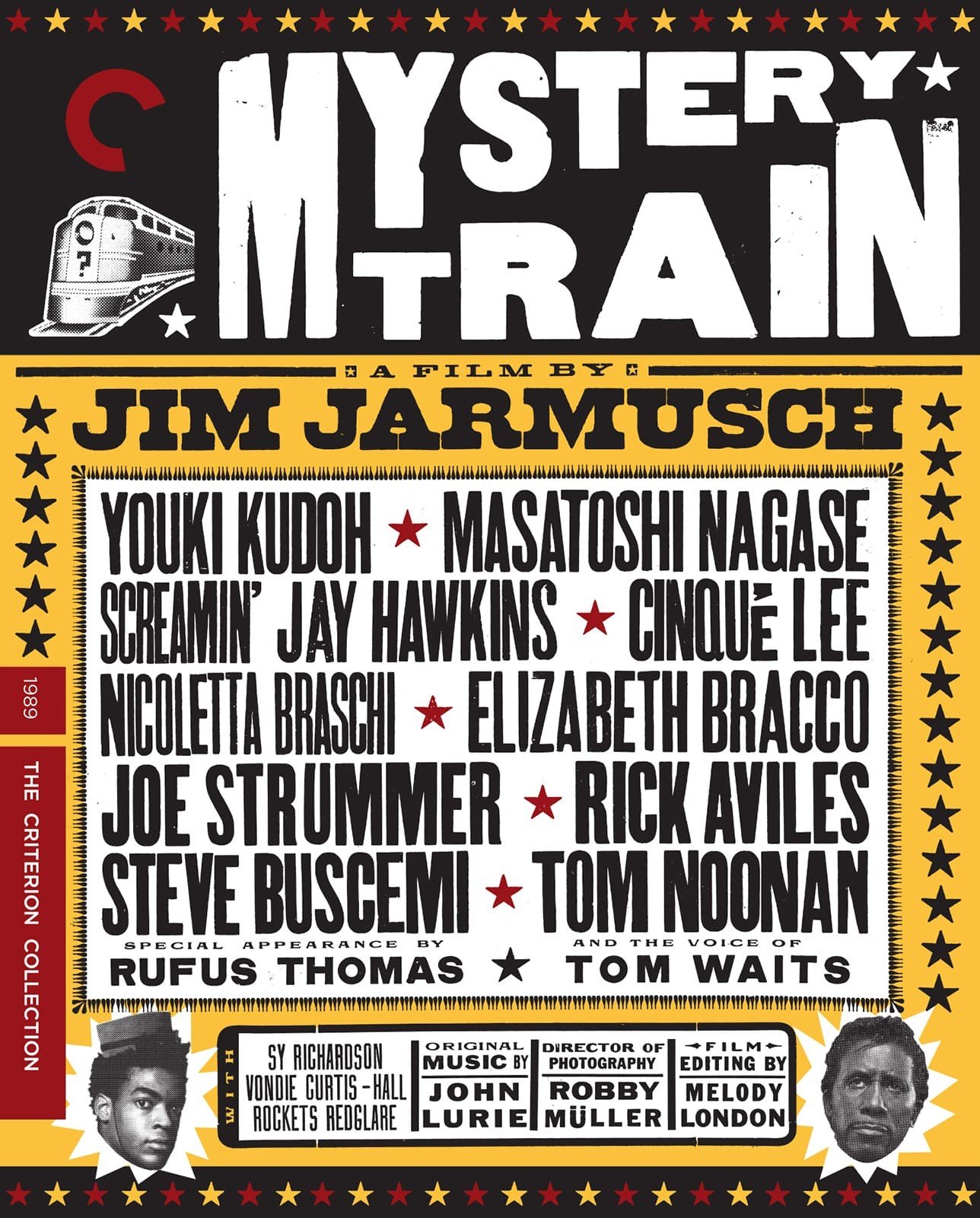 It might not say much to assess it as such, but there’s little doubt that Mystery Train is Jim Jarmusch at his most emotionally forthright. True, the closing, dawn-tinged Finnish segment to Night on Earth, his chronological follow-up, grasps at a more indelible, traditional despondency (the aging cab driver’s tragic tale brought me so near to tears that I instantly forgave the distancing self-identifiers from his backseat passengers), but as with the charming if planate surface of the masculine-chic Down by Law, the apparent candor of Night on Earth is channeled through cinematic connoisseurship first and foremost. Jarmusch doesn’t express “feelings” toward characters or situations in these movies; he affectionately dotes, instead, on slightly, and purposefully, misaligned references to proletariat-obsessed auteurs like Aki Kaurismäki and foreign-buff mainstays such as The Grand Illusion, stitching together a tapestry of appropriated plot points and stylistic influences that a subdued cast can be brusquely prodded through. That he manages this with an impressive dearth of film-school amateurisms is proof enough of the postmodern expediency of his trademark directness; everything, rather comfortingly, is always precisely as it seems in Jarmusch’s universe, even if that requires us to take quotidian restlessness and twentysomething heartache entirely at their vapid face value.

And yet, Mystery Train remains anomalous in the Jarmusch canon, following an ethnically diverse and loosely interconnected collection of characters who are all drawn, either pragmatically or cosmically, to one dilapidated Memphis hotel at various intervals over the course of a single evening. The genre potpourri that would later inform Ghost Dog and The Limits of Control is curiously absent despite the film’s elliptical, vignette structure, and even the film’s glittering, deadpan aegis possesses visible chinks through which we spy genuine, even animated, compassion. In a scene toward the end of the film’s first story, “Far from Yokohama,” an ersatz-suave Japanese teenager, Jun (Masatoshi Nagase), is criticized by his girlfriend, Mitzuko (the irresistibly effervescent Youki Kudoh), for his perceived stoicism and unresponsiveness. “I’m very happy,” he replies while she smears lipstick across his stony, unamused visage as an attempted gag. “That’s just the way my face is.” It’s a compellingly meta moment, one that not only chides American audiences for their pervasive and insipid stereotyping of Asian tourists, but also acts as a subtle directorial self-apology. The rock n’ roll-infatuated Jun may not exactly be the Jarmusch philosophy incarnate, but his über-sober mannerisms, meticulous hair-and-attire configuration, and esoteric preference for Carl Perkins over Elvis Presley provide a passionate defense for the honest, if seemingly emotionless, niceties of cool.

That Jarmusch waited until his fourth effort to offer such a lucid argument for his ethos says much about his affinity with the milieu of Mystery Train. The sleepy, barely urban Memphis seen here is no less artificial than the New Orleans of Down by Law or the California frontier of Dead Man (does the Sun Records landmark really receive so few daily visitors?), but it’s been comfily incubated by the earthy warmth of music, rather than film, history. And while the director’s clear debt to the latter is often manifested in disorienting and cryptically allegorical allusions, his determination to render a world informed, if not always inspired, by proto- rock, soul, and blues yields a reverential tone poem of startling warmth and perspicacity: As an auteur, Jarmusch is obligated to toy with and claim ownership of movie language, but he’s more than willing to admit that the golden prong of popular music is plugged into something beyond him. As the Japanese couple enters the main hall of the Memphis train station, Mitzuko yelps and then applauds the space’s echo in a quiet tribute to rockabilly slapback delay; a pridefully nomadic Rufus Thomas then holds out a cigar and asks the pilgrims for a flame. By the time Screamin’ Jay Hawkins, dressed to the nines in a garish red suit, enters as a cocky concierge spouting condescending aphorisms, it’s apparent that Jarmusch is “dancing about the architecture” of pop’s poor South etiology.

Even the narrative events and details that force the dramatis personae into unknowingly sharing the same hotel space throughout the one-night stand of the running time are borrowed and embellished from the textbook of American balladry: Newlywed and newly widowed Luisa (Nicoletta Braschi) is transporting her husband’s cadaver back to Italy when a drifter (a delectably creepy Tom Noonan) entices and intimidates her with a hitchhiker’s ghost story; lovers Dee Dee (Elizabeth Bracco) and Johnny (Joe Strummer) fall out of both luck and love, compelling the former to flee to the folksy Mecca of Natchez and the latter to engage in over-compensatory male bacchanalia with his unwilling nebbish barber of a brother-in-law (Steve Buscemi) and a clumsily operated firearm. The familiarity of the characters suggests their entrapment with stifling, homespun fatalism—just as the shadows of Elvis and Jerry Lee Lewis have seemingly disallowed municipal progress in Memphis, dooming its inhabitants to a backward zone of TV-less motels, oleaginous diners, and purgatorial taverns, the notion that the lives of people like Johnny and Dee Dee have been gravely predestined by Johnny Cash lyrics fills us with morbidly entertained empathy. After all, the infamously incarcerated murderer didn’t shoot a man in Reno to merely watch him die; his hedonistic misfortune is our cautionary novelty, and our smug freedom implicates us in his crime. Similarly, the flourish of violence that ends Mystery Train is like a shoddy insurrection against the causeless rebel motif, expressions of existential confusion from a bullet-punctuated voice.

And in spite of the third-act television culture quotes, one sincerely wants to imagine the senescent and deceased Nephilim of Memphis’s sound studios governing every inch of the film’s world, from the bright, brittle, country affectations of the Sun-like morning to the woeful horns and sinful piano of the cold Stax nights. Not even Jarmusch himself seems above the star-studded legislation; when Screamin’ Jay Hawkins dismissively turns to his diminutive, poorly dressed bellboy and insists that “clothes make the man,” we can sense the director listening hard to his conviction—and, perhaps, plotting an explanation for the muted, No-Wave hipness of his own threads. And while Elvis’s ghost might be a mite confused to find himself and his regal, gold lame suit transubstantiating in a hotel with hourly rates, the example of his innocently groundbreaking black mimicry is at the heart of the film’s protean cultural approach. Mystery Train is a singularly enthusiastic American anthem that trenchantly interprets the cult of audiophilia as filthy gas stoves roasting marshmallows, raspy radio DJs hawking fried calamari, and ill-equipped racial armies ignorantly clashing by night.

It’s been a full two years since I purchased my first Blu-ray player and I’m still taken aback at how high-definition restoration can transform a film’s significance. Of course, many 1080p discs confirm the cinematographic poetry we merely caught glimpses of on VHS or DVD (the Masters of Cinema Sunrise issue and the Criterion Collection’s Days of Heaven being the most representative examples), but others, like Mystery Train, seem to have exfoliated a callous layer that had been obfuscating utterly unknown detail. None of Jim Jarmusch’s films have seemed particularly humanistic; he’s fascinated by behavior, obviously, but not necessarily sympathetic to it, and maintains a histrionic-free atmosphere where intimacy is rendered as a piquantly mechanical, hopeless response to alienation. But on Blu-ray, Mystery Train is resolutely about people. It might even be, perversely, about race: The skin of Screamin’ Jay Hawkins glistens with sable imperiousness just as Steve Buscemi’s pasty mug seems camouflaged in the occasional swatches of coarse film grain. And as usual, Robby Müller’s palate of diverse gradients is its own character: Many of the conspicuous red splashes and soft, arid greens make this film a kind of locale-oriented companion to Wim Wenders’s Paris, Texas. But where the dust-and-neon environ of that American odyssey seemed plaintive and delicate, the concrete and dry brush of Jarmusch’s ghost-town microcosm is stolidly otherworldly. Mystery Train, especially in high-definition, is a kind of abstracted thriller where tension is futile, the supernatural is elided (aside from one instance), and where longeurs of ennui are broken by eerie frissons. The monaural sound on the disc is as clear as it can get; one can hear John Laurie’s eerie, ambient score and the primitive, soulful sound of those inimitable 45’s caulking the cracks between the prosaic dialogue.

Criterion may have bottomed out on Jarmusch supplements after their Stranger than Paradise DVD, but Mystery Train still features some items of curiosity. Like Woody Allen, Jarmusch refuses to watch any of his movies after they’re released, so in lieu of commentary he answers submitted questions. The track recorded for Mystery Train includes a plethora of fascinating inside production information, though his fans are beginning to repeat themselves (do we really need more lists of novelist influences?), and his stream-of-consciousness occasionally succumbs to idiosyncrasy; he starts off, for example, by reading from the newspaper and launching into a humanitarian tirade about the Haitian earthquake of 2010 (for posterity, one must assume?). There are also a handful of behind-the-scenes stills and a brief featurette about the Memphis locations used in the film, but the real highlight is I Put a Spell on Me, an excerpted documentary about Screamin’ Jay Hawkins’s career that Jarmusch participated in. There aren’t enough interviews included that grill Hawkins on the formation of his signature growl, but he waxes philosophical while imparting his intuitive perspective on acting and stage performance (and dig those fossil pendants!). The booklet includes informative if benign essays from Dennis Lim and Peter Guralnick.

Jim Jarmusch managed to abreact his interest in pop music, spectral Elvises, interlocking storylines, and cheesy TV in one brilliant, poetic burst. Why the hell is it taking Tarantino so long?

Review: Mark Steven Johnson’s When in Rome on Touchstone DVD