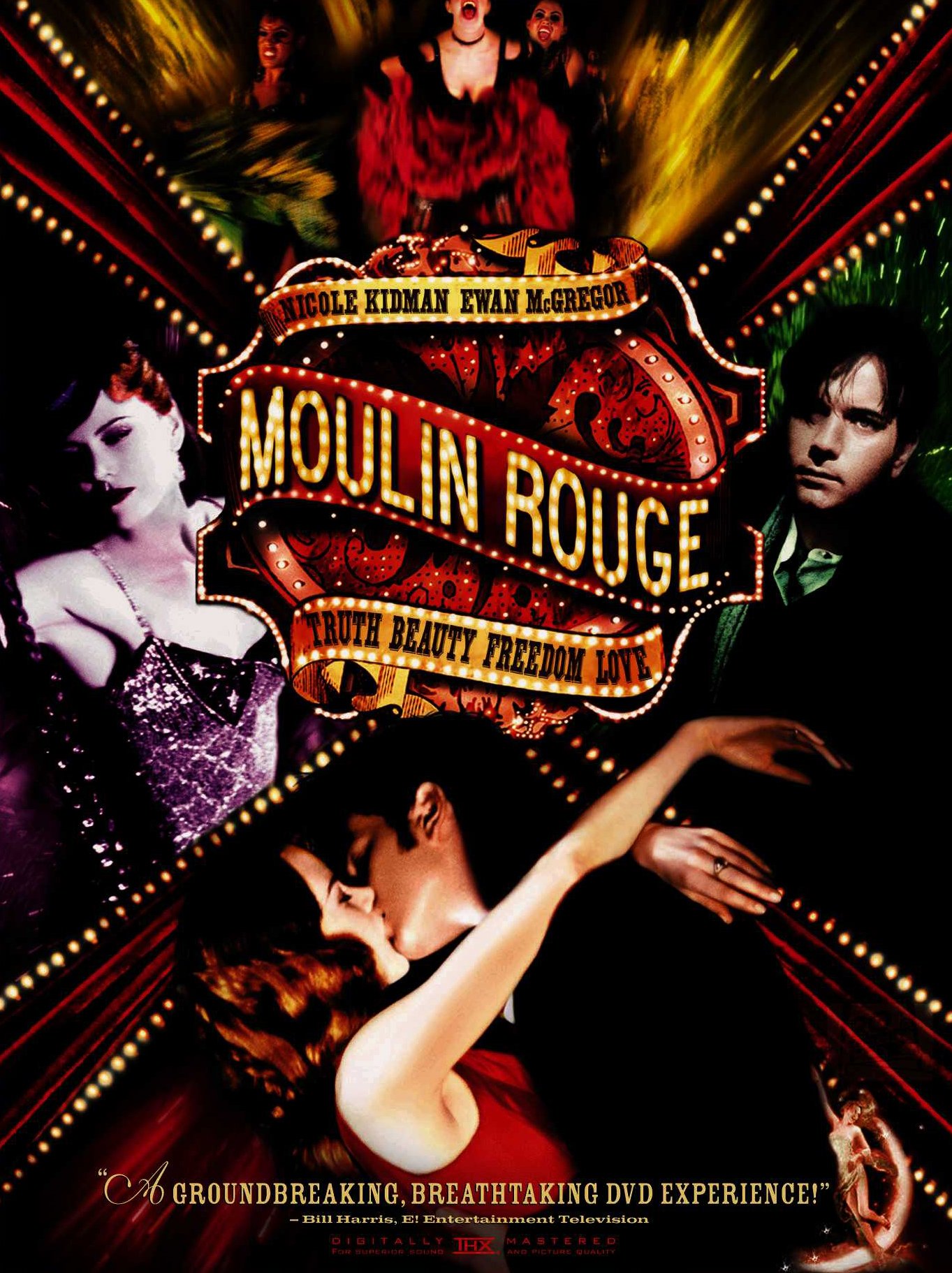 I have this image of Baz Luhrmann as a little boy, sitting before a papier-mache house in the Australian outback next to toy trucks painted in bright colors and toy soldiers dressed in tutus. Sometime after Strictly Ballroom, Luhrmann must have come across the kind of budget that would pamper to his youthful, wide-eyed obsession with the color wheel. Less a filmmaker than circus ringleader, Luhrmann transforms Moulin Rouge into the biggest party since Steve Rubbel and Ian Shrager’s Studio 54. His Moulin Rouge is a hyper-energized house of burlesque where women like Satine (Nicole Kidman) pillage the hearts of men with their coy declarations of love. This pseudo-whore mistakenly falling in love with writer Christian (Ewan McGregor), thinking him to be the Duke of Monroth (Richard Roxburgh), the man who will supposedly turn the gorgeous can-can chanteuse into the best actress since Sarah Bernhardt. Less a film than a collection of short music video clips, Moulin Rouge is a celebration of artifice that is at once glorious and exhilarating as it is loud, soulless, and obnoxious. Despite some remarkable musical pastiches and riveting set pieces, this postmodern wank-job doesn’t have much of a heart. If you like sugar highs, though, Moulin Rouge will not disappoint.

Moulin Rouge’s anamorphic widescreen transfer couldn’t possibly look better. Every color scheme, every light and shadowy corner of Don McAlpine’s cinematography is hyper-elegantly preserved. Considering how much prancing, prowling, screaming and strutting is happening on screen at any given moment, it’s a minor miracle how this transfer was so precisely saturated. Thankfully, the film’s sound is considerably less garish than you would think. The overall dynamic range is spectacularly clear, doing justice to every background effect of the film’s nuanced musical soundtrack.

Not unlike Fox’s fabulous Fight Club DVD, this two-disc Moulin Rouge collection is both exhilarating and exhaustive to the point of distraction. Diehard fans of the film, though, will have no problem spending hours travelling through the disc’s seemingly endless array of features. The disc’s highlight is the production commentary from Baz Luhrmann, Catherine Martin and Don McAlpine. Factoids are notably available: that’s no stunt double coming down the Moulin Rouge’s rafters (Kidman’s a brave woman). Luhrmann and cinematographer McAlpine provide the kind of priceless historical and technical insight that is notably absent from the otherwise banal dissertation provided by Baz Luhrmann and co-screenwriter Craig Pearce on a second commentary track.

The second disc features HBO First Look’s The Making of Moulin Rouge, an adequate if now wholly redundant documentary on the film’s making. For an intense breakdown of the film’s many historical, technical and sonic constructs and engagements, one should go no further than the first commentary track. The most notable feature on the second disc is the The Stars section, an interview gallery featuring the film’s principal players (McGregor, Kidman, Leguizamo, Roxburgh and Broadbent) which is preceded by an awesome, old-fashioned clip of Kidman and McGregor exchanging love glances. The Story is About Section shows Luhrmann and Pearce excitedly reading from early stages of their screenplay while The Cutting Room features an interview with Luhrmann and editor Jill Bilcock and abandoned edits of various scenes from the film.

Since the film’s features are as bloated as the film itself, I’d say the DVD makers did the film justice. Moulin Rouge is a must-own for fans, a steal at its current retail price. Kylie Minogue’s Green Fairy is our delirious guide through the disc’s many features. Hoping for time-capsule status, Fox has inundated their two-disc DVD of Moulin Rouge with enough features to make anyone feel like they conceptualized, produced and marketed the film themselves.