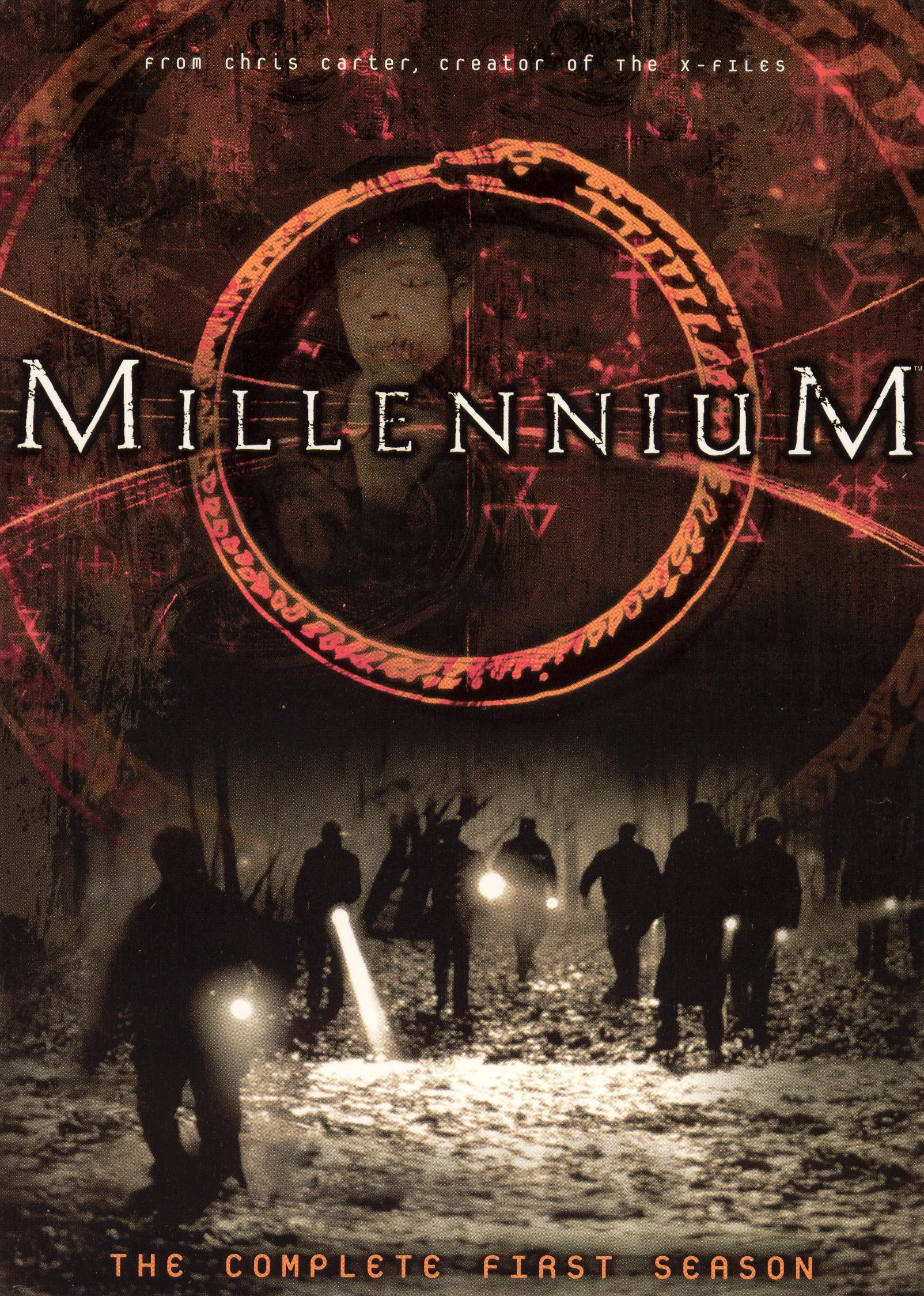 Chris Carter’s television work always improves in retrospect; his seemingly haphazard, on-the-fly narratives become more coherent when taken out of the hellish, commercial break-happy context wherein they spawned. Best viewed as a mosaic storyteller—with the connections between episodes more often hidden in off-screen subtleties as opposed to surface action and dialogue—Carter’s long-term themes are big, hence broad (explorations of apocalyptic prophecies, of alien invaders both literal and metaphorical, of human beings’ fragile scientific and spiritual fabrics), but he focuses his concerns through all too earthbound lead characters, laconic personalities whose stony countenances parallel both the futility and necessity of their ongoing quests.

In Carter’s greatest series Millennium, it’s literally one such man against heaven and hell, the criminal profiler Frank Black (Lance Henriksen), formerly of the F.B.I. and now working for the mysterious Millennium Group. In the series’s first episode Frank moves his wife Catherine (Megan Gallagher) and daughter Jordan (Brittany Tiplady) to a big yellow house in the Seattle suburbs. It’s a glaring safe haven, too perfect, too much a symbol. And, indeed, as Millennium’s first season progresses the Black family home comes to resemble the height of mortal arrogance, a vain attempt, as one character notes, to “shut out the darkness.”

Of course, with a little effort and denial such illusions can be maintained. For the first half of the show’s first season the yellow house is Frank’s dividing line between his family and his work. With the Millennium Group at his side, along with frequent help from Seattle Police Department detectives Bletcher (Bill Smitrovich) and Geibelhouse (Stephen James Lang), Frank seeks out a variety of serial killers (all white males) who embody the worst of mankind. “There’s only been one incident of a black male serial killer,” Frank says in the pilot episode, a line that hints at the character’s unspoken biases which eventually come back to haunt him.

Following “Pilot,” the initial run of episodes earned Millennium a dubious “serial-killer of the week” description, an unfair and limited judgment that the series’s DVD release will hopefully remedy. Certainly one can sympathize with viewer frustration, especially when Carter himself set the serial-killer bar so high from the start. Blessed with a month-long shoot and minimal interference from network executives, the pilot episode has an everything-and-the-kitchen-sink narrative that features seedy strip bars, bleeding walls, apocalyptic writings of Nostradamus and Yeats quoted in French, gay cruising, live burials, eyes sewn gruesomely shut, a decapitated head, and Henriksen, that great intimidating skull-face of an actor, presenting his young daughter a puppy.

After such a brilliant smorgasbord of images and ideas it takes some resolve to work your way through the next 11 installments (pretty much all variations on the pilot’s “evil-that-men-do” theme and limited by the vagaries of television production) to the more purposeful second half where the Black family’s false sense of security is slowly, but irreparably pierced. It’s worth the journey, for the numbness one experiences over the first season’s initial 12—a feeling Frank himself terms “psychic Novocain”—is fully appropriate to the characters’ development. At their best (“Gehenna,” “The Judge,” “The Well-Worn Lock,” “Weeds”) the stand-alone, moral tale structure of these episodes—O. Henry by way of Flannery O’Connor—capture a distinct feeling of millennial unease, the sense that the violence perpetrated is a direct result of impending apocalyptic events to which Frank and his family are inextricably attached. At worst these episodes are daring experimental failures (“The Wild and the Innocent”) or weak, though still thought-provoking reiterations of better stories (“Wide Open”), and even the series’s nadir (the goofy and parody-ready “Loin Like A Hunting Flame”) has some redeeming visual plays on character point of view.

Taken as a whole, the initial 12 build up an anticipatory dread that comes to a head through the final 10 episodes. After the great 13th installment “Force Majeure” (about a modern day Noah’s Ark), Frank’s personal demons get a workout in “The Thin White Line,” “Sacrament,” and “Walkabout,” which question the past, present, and future of his near-psychic insight into the minds of murderers. The great standalone “Covenant” seems a requiem for Frank’s work/family divisiveness, a self-imposed psychological line smashed by the androgynous demon Lucy Butler (Sarah-Jane Redmond) in the subsequent two-parter “Lamentation” and “Powers, Principalities, Thrones and Dominions.” The season comes to a satisfying thematic end in “Maranatha,” which deals with the myth of the Russian antichrist Yaponchik in big, bold style. Frank’s final line of dialogue in the episode, “He is coming soon,” foreshadows the tragic events of the season’s hasty coda “The Paper Dove.” The cliffhanger of this darkly comic episode seems too much of an afterthought, though one that, for those in the know, has long-lasting and catastrophic ramifications. Indeed, through the episode’s final invasive act, the first season’s pre-apocalyptic signs and portents give way to the normally observant and removed Frank Black’s true test of character. Like many a Carter protagonist, Frank’s greatest enemy may ultimately be himself.

Millennium: The Complete First Season comes to DVD on six dual-layer discs, all episodes presented in the original 1.33:1 full-frame ratio. For the most part these are excellent transfers with blacks holding solid-so important considering the series’s dark visual palette-though there are a few inconsistencies one assumes are inherent to the video masters. Nothing so horrible as the botched transfer of Carter’s X-Files episode “Triangle” on The X-Files: The Complete Sixth Season DVD set, which I plan on taking every opportunity to point out to the suits at Fox who have declined to fix it. Sound is Dolby Surround over three audio tracks (English, Spanish, and French), all of which ably represent Millennium’s ominous aural design. The drumbeat intros and memorable Mark Snow theme song never sounded so bloody good.

Two audio commentaries highlight this set, the first by Chris Carter on “Pilot” and the second by director David Nutter on “Gehenna.” Carter’s is a very dry track, dealing more with creative anecdotes than thematic interpretation, though he does drop one delicious bombshell I’d never heard: the Millennium theme was inspired primarily by a Kylie Minogue track. Nutter’s commentary is more engaging. He offers a fascinating interpretation of Millennium as a show primarily about point of view, which goes a way towards informing the stylistic choices of his four episodes (“Pilot,” “Gehenna,” “522666,” and “Loin Like a Hunting Flame”). “Order in Chaos” is a near hour-long documentary about the making of the first season. Carter is front and center, considerably more interesting than on his commentary track, and he’s joined by Henriksen and Gallagher and several other crew members, all of whom reminiscence about season one’s challenges and accomplishments. “Chasing the Dragon” is a featurette profiling the Academy Group, the real-life inspiration for the Millennium Group. It’s a rather dull talking-heads affair featuring old, balding white men waxing philosophic about evil. Next to these geezers Lance Henriksen is the entire male cast of Troy. A selection of TV spots for the Millennium premiere episode and three Fox movie trailers round out the disc.

I prophesy: You will buy Millennium: Season One. You can’t stop it.