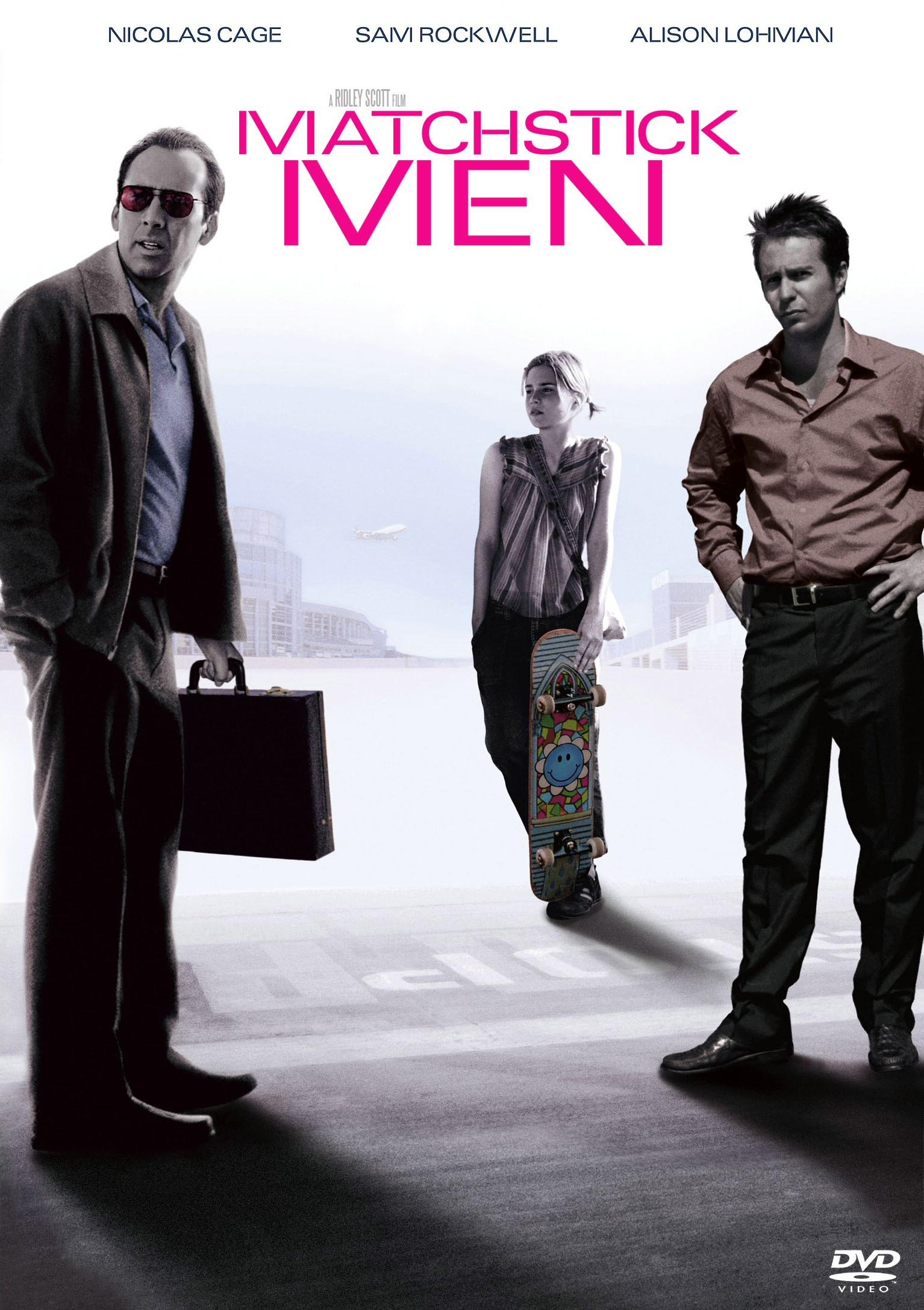 In Ridley Scott’s retro concoction Matchstick Men, a phobic con artist played by Nicolas Cage decides to turn one last fraud after meeting the 14-year-old daughter he never knew. The script by Nicholas and Ted Griffin is a mess of clichés—it’s only a matter of time before the obsessive compulsive Roy (Cage) meets daughter Angela (Alison Lohman) that the facial ticks slide off and he forgets to take off his shoes inside his mod living room. Twist endings are a dime a dozen nowadays, but Matchstick Men’s final clincher isn’t unique because is forces us to reconfigure everything that transpires prior, but because it makes its very predictability part of its master fraud. The film’s con is written in everything from the sometimes tongue-in-cheek dialogue (“For some people, money is a foreign film without subtitles” may be the best line of the year) to the steely backdrops and retro songs that make the film difficult to place on an actual timeline, and part of the film’s genius is how Scott repeatedly pokes his audience with this aesthetic framework. Then again, Scott is usually his own worst enemy, so there’s no real excusing the cheap film-school tricks he employs throughout the film’s first half to evoke Roy’s compulsive behavior. Scott’s frequently blurry, fast-moving camera merely exaggerates what an overly mannered but impressive Cage evokes just fine on his own with his character’s unharnessed blinking and compulsion to close doors not once, not twice, but three times. This stylistic noxiousness predictably subsides along with Roy’s compulsive behavior as soon as the incredible Lohman enters the picture. But if you’re enticed by the clever con written in the film’s mise-en-scène, it’s still a disappointment that the filmmakers don’t treat the sentimentality of the film (especially everything that transpires after the final trump card) with the kind of wit that governs its aesthetic. Those who’ve pleasantly coasted along with Matchstick Men’s sleek, retro groove may find themselves reminded of how Robert Altman coyly and viciously rubber-stamped The Player’s mordant Hollywood molestation with a clever bun in the oven.

What went wrong here? Matchstick Men looked great on the big screen but you’d never know it from the DVD. Skin tones are good and edge enhancement is virtually nil, but the print is on the muggy side and exceedingly grainy, and shimmering is pretty constant throughout, especially in more shadowy scenes. The Dolby Digital 5.1 surround track isn’t exactly a stand-out, but dialogue is crystal clear and the track employs left and right channels effectively enough.

First up is a composite audio commentary track featuring Ridley Scott and the writers of the film, Nicholas and Ted Griffin. Because Scott is an absolute bore and the two separate tracks are spottily interwoven, it’s anyone’s guess why Warner Home Video didn’t offer the two separate recordings in their entirety. The brothers are consistently engaging and their commentary is largely anecdotal, from their encounters with an “effusive” Robert Zemeckis to their first meeting with Scott. Better yet is “Tricks of the Trade: Making Matchstick Men,” which runs for 77 minutes and covers every aspect of the film from its casting and costume fittings to post-production test screenings and showcases, not one, but two on-set freak-outs. Also included here is the film’s theatrical trailer.

Ridley Scott fans: Imagine for a second what Matchstick Men would have looked like if Robert Zemeckis had directed it.

The Old Way Review: Clichés Are in the Saddle of Nicolas Cage’s First Western

Review: The Devil Rides Out and Rasputin the Mad Monk on Anchor Bay DVD