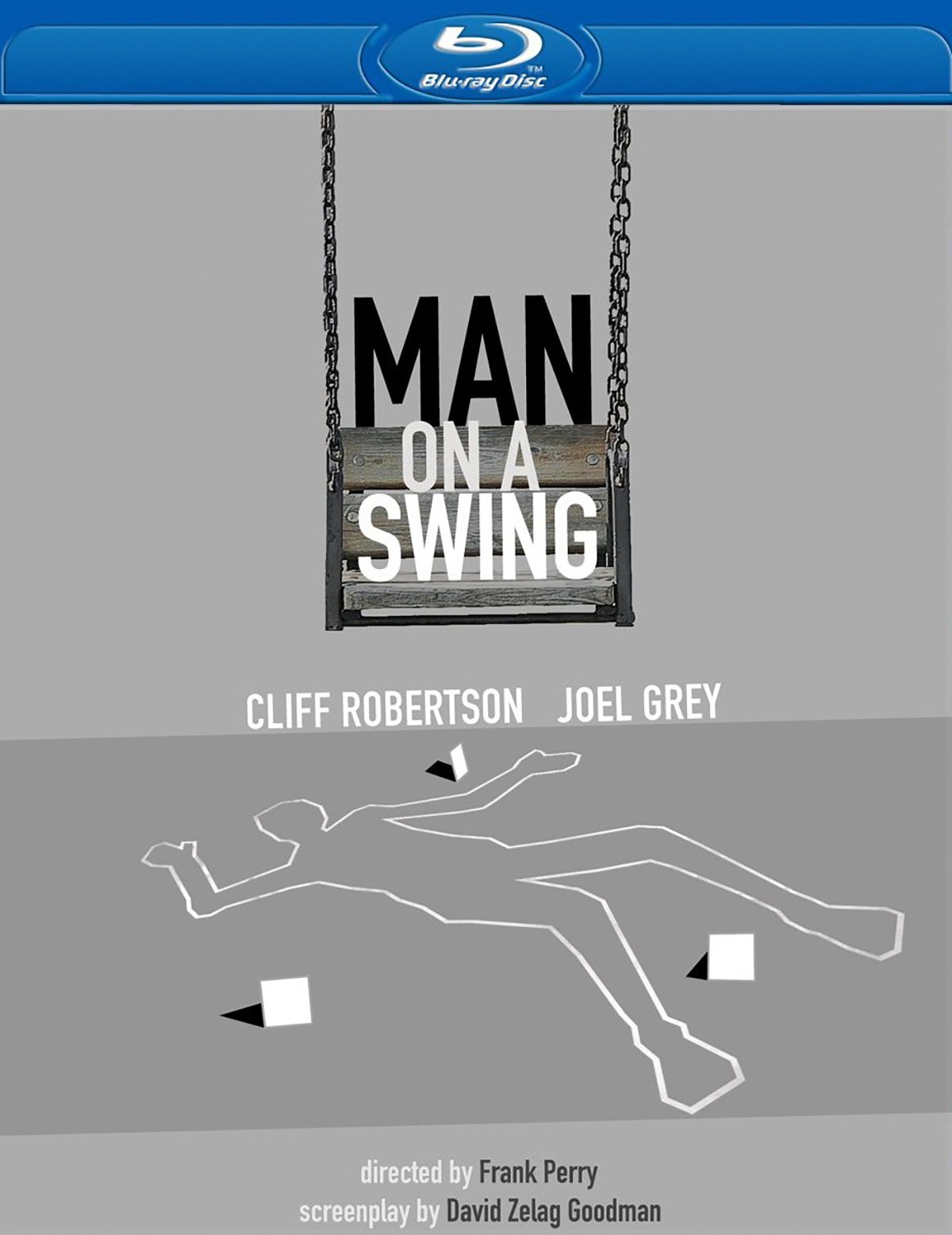 A jagged transitional fossil between Peyton Place and Twin Peaks, Frank Perry’s Man on a Swing teams a laconic, ruddy-faced police chief (Cliff Robertson) with a spastic, self-described clairvoyant (Joel Grey) on the occasion of a teenage murder in suburban Indiana. The film opens, much like David Lynch and Mark Frost’s bathetic melodrama, with the discovery of a promiscuous girl’s corpse in an unceremonious resting place. (In this case it’s the passenger side of a Volkswagen, which is parked near a shopping center—an overstatement of the script’s deeply nested skepticism toward mass culture.) When Chief Tucker arrives at the crime scene, he finds the vehicularly entombed body swaddled in a picnic blanket, with a pair of yellow shorts bunched at the ankles and a soiled tampon nearby; he examines the girl and she peers back through sultry, not-quite-open eyes, her smugly parted lips frozen in pre-Raphaelite facsimile.

A series of stream of consciousness-like sequences follows, sans rhythm-wrecking establishing shots, wherein the chief hunts for suspects among the deceased’s blank-eyed, shaggy-haired classmates; his pregnant wife (Dorothy Tristan) back at home, meanwhile, demands attention of her own, bringing the obstetric motif (or MacGuffin, rather) full circle. None of these crudely drawn ancillary characters has the believable tangle of motives that made even the slower parts of Twin Peaks so mind-tickling; the kids that Tucker tries to browbeat into confession have been emptied of complicated desire, presumably by what was then-de rigueur marijuana use. But the flat, stick figure-populated milieu proves narratively crucial. The big break in the case is the resolutely un-flat Franklin Wills (Joel Grey), who phones the police station claiming to be a psychic, and then astonishes Tucker and his staff with extensive knowledge of confidential information related to the girl’s murder. (This introductory scene, in which we hear Wills’s crackling, impish voice over a fuzzy intercom while Tucker and a sheriff exchange nervous glances, has the uncanny plainness of magical realism; it’s an absurd séance not only occurring in broad daylight, but within an institution meant to uphold concrete laws.)

Wills is swiftly, if tentatively, assigned to assist the investigation, and his alternately flamboyant and professorial presence blasts through the town’s booze- and reefer-aided staidness. His lanky frame and oval, hair-daubed head have all the charm of a sleek forearm with a mosque-like pimple capping the elbow; Grey’s antic staginess, meanwhile (he spins around the room and contorts his face while his character communicates with the dead girl’s “spirit”), suggests that of a fume-potted Delphic Oracle for the American Midwest. Wills’s charisma also distracts from the thinness of what has been, up to the point of his entry, the central plot, and allows Perry and screenwriter David Zelag Goodman to grow a “what if” within their “whodunit.”

The remainder of the film, indeed, departs from the murder investigation and concerns Tucker’s attempts to invalidate Wills’s transcendental attunement—the fallacious assumption being that the man’s clairvoyance, if proven real, would both preclude his involvement in the killing and help reveal the actual perpetrator. This logic is, of course, hardly sound: Extrasensory perception and manslaughter aren’t mutually exclusive activities. And the ending twist, which Twins Peaks inherited schematically from the film, implicates not simply a single, human killer, but a spiritualist parasite/host relationship that involves homicide. This denouement boomerangs back, slicing through our comprehension of the preceding content with sociopolitical sharpness, much like the revelation of Lynch and Frost’s specter-villain BOB does.

A dense, if subtle, allegory emerges retrospectively: The Indiana teenagers are clearly ensconced in the anesthetized, free-love philosophies of the late ‘60s and early ‘70s, while the authority figures drink themselves more traditionally into apathy. (“Want another beer?” is the cops’ mantra, on- or off-duty.) Wills’s controlled and seemingly innocuous mania, however, is the anachronism, more redolent of the collegiate-oriented, Beat-hipped anxiety of the previous decade—an era during which intellectuals (Aldous Huxley and Jack Kerouac, for instance) suggested substance abuse as a kick-starter for private, cerebral experimentation rather than as the agent of social change Timothy Leary would later brand it as (or the catch-all analgesic/aphrodisiac it became later still). True-life conspiracies like the C.I.A.’s now-declassified LSD mind-control experiments exemplify the dark side of this earlier, headier trip; what could unlock the brain’s hidden compartments could also enslave the entire organ.

Wills’s spasmodic sooth-trances, during which he claims to inhabit the consciousnesses of several other people, isn’t so unlike a drug-induced hallucination, and his spry, otherworldly acrobatics effectively hypnotize on-lookers. His character, then, collapses the two sides of Project MKUltra: He not only facilitates the lysergic trip, but also takes it personally, because his ability to manipulate others begins with the intense acuity of his own body/mind awareness. And the fact that Wills maintains an ordinary job at a manufacturing plant in spite of his gift—that he’s infiltrated the marketplace with ease—completes the paranoid fantasy, converting him into a kind of überman sleeper cell. A scene in the film’s third act pits him against a pair of psychiatrists who readily intuit his megalomania; Wills’s ability to see what others do not, to “use the trip” (or “trance,” in his own parlance) advantageously where others simply get high to relax gives his sentience a god-like fluidity.

Wills is, symbolically, neither pusher nor addict, but someone who “trips” so effectively that he deifies himself above the masses made impotent by downers; he is, finally, Charles Manson—another anachronistic non-hippie, and another proponent of the brainwashing potential of narcotics—as seen through Manson’s own eyes. (Perhaps not coincidentally, around the time that Man on a Swing’s source material—a true-crime novel—was optioned and adapted into a script, Manson was again national news due to California’s elimination of the death penalty and the resultant commutation of his sentence.) This interpretation renders the film’s cautionary feel somewhat moot; how the hell can monsters like Manson be safeguarded against? But Man on a Swing remains successful as a counter-cultural, Manichean mythology, one that orders America’s wildly transforming socio-narcotic landscape into a subtle hierarchy of consciousness.

Although altered here from its original 1.85:1 aspect ratio, Man on a Swing is adeptly presented by Olive Film’s 1080p release; the bland skin tones and vividly sour wardrobes are suggestive of spiritual asphyxiation, and a hint of film grain keeps the image loose and mercurial. The print chosen for transfer thankfully has few blemishes despite the affably manic jump cuts; director Frank Perry and cinematographer Adam Holender carve up space and time like so many sides of beef, sprinting from close-up to close-up and scene to scene without much logical warning, to keep the audience’s toes and free-associative skills exercised. The telecine process seems to have robbed some wider shots of their depth (there’s a sickly flatness to everything), but this, too, suits the film’s themes. The mono sound mix rather delightfully showcases Cliff Robertson’s Popeye-like muttering and Lalo Schrifin’s creep show score, which is one of the composer’s more graciously understated.

A competently made ESP thriller with knotty socio-political overtones, Man on a Swing is ripe for rediscovery by Twin Peaks and Lalo Schrifin fans alike.