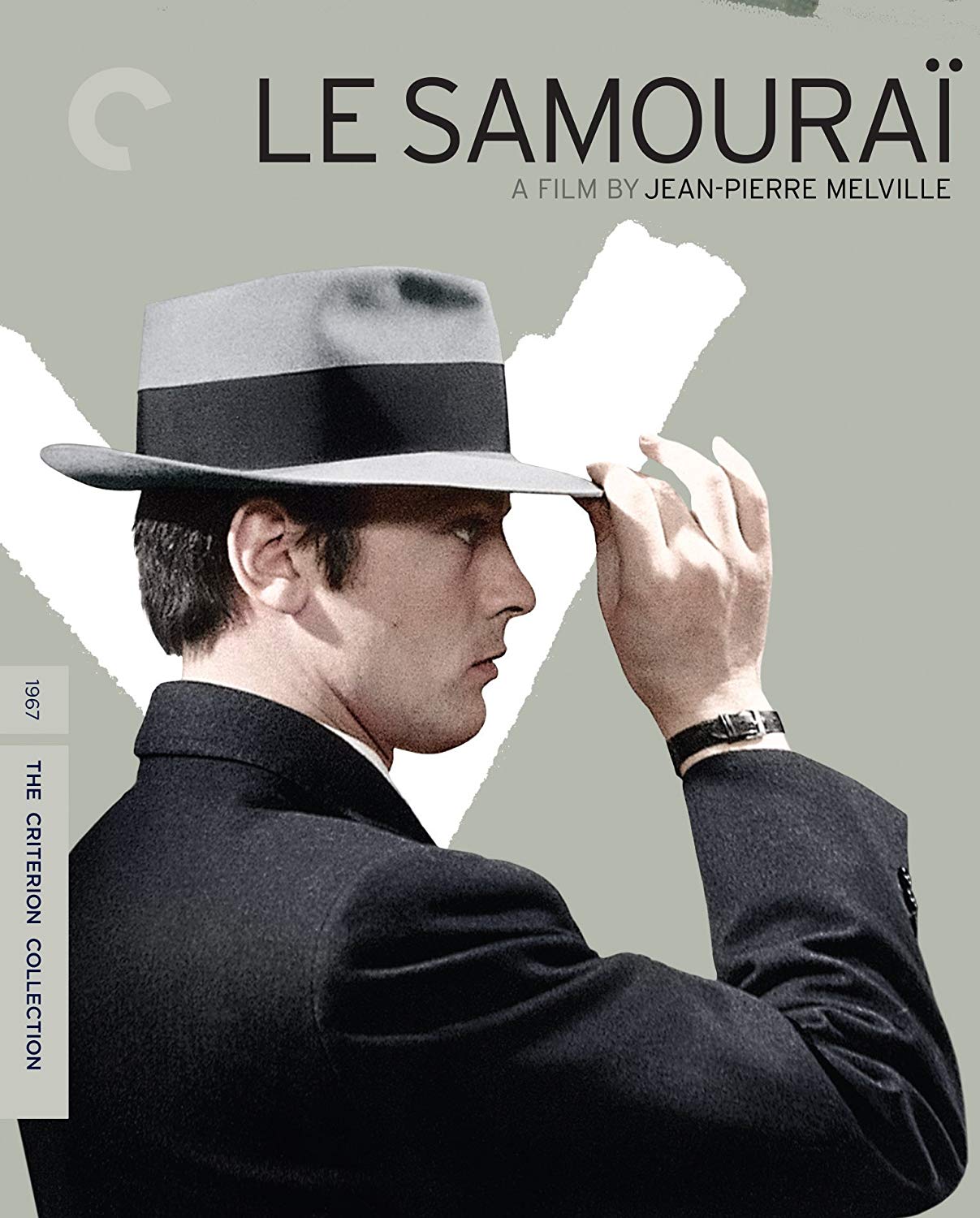 Like Pickpocket’s titular thief, Le Samouraï’s hitman Jef Costello (Alain Delon) is a man governed by method, the meticulous execution of his work being the core facet of his character. Calmly and carefully choosing the right key from an enormous key ring to steal a car in broad daylight, or deliberately evading the cops who are trailing him by circuitously navigating the Parisian subways, Jef is a man for whom life is but a series of tasks to be carried out with purposeful efficiency, his every mechanical movement and blank-eyed stare conveying the fact that an adherence to ritual, to technique, is what defines him. However, unlike Bresson’s petty crook, Jean-Pierre Melville’s murderer derives no spiritual transcendence from the process of his vocation; his is an existential existence in which the rigorously defined rules that guide his behavior simply prevent him from drifting off into a lethal void of purposelessness. Yet though Jef’s dedication to his criminal undertakings doesn’t offer catharsis of either a secular or religious nature, the same cannot be said of Melville’s 1967 masterpiece, which—through assuming the same systematic attention to detail as its iconically cool protagonist—achieves an atmosphere of mesmerizing, otherworldly beauty and grace.

Painstakingly charting Jef’s killing of a club owner, his creation of dual alibis, his interrogation by the police, and his subsequent efforts to evade both the law enforcement superintendent (François Périer), who’s convinced he’s guilty of murder, as well as the employers who want him dead for potentially squealing to the cops, Le Samouraï progresses with a finely honed precision that’s equally indebted to classic noirs (especially those with elaborately staged heists), then-contemporary ennui-inflicted European films, and Japanese samurai cinema. Whether with regard to Périer’s superintendent turning the screws on the girlfriend (Nathalie Delon, Alain’s wife at the time) covering for Jeff, or during a sequence in which two officers bug Jef’s barren apartment, Melville’s silken, minimalist direction is measured and patient, maintaining an intense focus on the particulars of each character’s verbal and physical activities. This clear-eyed concentration is married to a cinematographic preference for chromatically bleak iron-grays (Le Samouraï marked Melville’s second color feature) and gorgeous, slightly askew compositions that—shot by expert Melville collaborator Henri Decaë—nonetheless seem, right around their edges and in their nimble movement, slightly unreal. It’s as if, by fixating so diligently on the unhurried events at hand, Melville finds a middle ground in which the realistically mundane and the entrancingly ethereal seamlessly blend together.

Such a dreamlike aura is amplified by Delon, whose piercingly vacant blue eyes and rigid, expressionless countenance radiate ghostly emptiness and a fatalistic resignation to the unalterable nature of life. A jarring mixture of feminine beauty (his skin and features almost as porcelain-delicate as his spouse’s) and no-nonsense toughness always lay at the heart of Delon’s appeal, and here, his near-total silence shifts the burden of his poised performance onto his simultaneously refined and rough mannerisms. When coupled with Melville’s entrancing mise-en-scène and François de Roubaix’s sweetly melancholic (and seldom used) theme music, Delon’s bordering-on-comical solemnity (enhanced by his unflashy ‘40s-era fedora and trenchcoat) generates a mood of romantic pessimism that speaks to the genre’s characteristic hopelessness. Jef’s emotionless demeanor and reflexive actions are those of a man—or a samurai, as Melville’s title and intro text from the (purely fictional) Bushido: Book of the Samurai implies—who sustains (and gains some modicum of control over) himself via formulaic, dispassionate procedure. And thus Jef’s ultimate doom is set in stone the moment he unwisely spares the sole witness to the crime—a pianist (Cathy Rosier) at the club whose selfless kindness proves fatally intriguing to Jef—a deviation from his masculine code of conduct that marks him as another of noir’s myriad antiheroes who foolishly attempt to stray from their life’s path.

Or does it? In the beguiling opening shot, Jef is barely discernable lying on his bed until—as his caged pet canary, which he later communicates with in the film’s funniest moment, chirps away—a puff of cigarette smoke draws our attention to his inert presence. A magic-tinged entrance in which Jeff seems as much a mythic phantom as a flesh-and-blood entity, the scene immediately establishes an alternate interpretation of the subsequent proceedings as merely the slumbering fantasies (or deathbed fever dream) of a dying Jef. Through this prism, Melville’s hypnotic gem seems less a gangster-tinged variation on Bresson than a kindred spirit to John Boorman’s Point Blank, another stylistically adventurous 1967 neo-noir dominated by a cold, robotic figure beset by emotional and psychological alienation. Of course, there couldn’t be two screen actors more diametrically opposed in terms of temperament or physicality than the dainty Delon (all smooth elegance) and the brutish Lee Marvin (a furious battering ram). Yet the more one becomes immersed in the gloomy moroseness and sense of tragic inevitability that infuses Le Samouraï, the stronger the impression becomes that their detached, gun-toting characters—both forces of nature compelled by impulses out of their control—function as complementary sides of the same “heads you lose, tails you also lose” coin.

Melville’s deliberately dull palette is accurately reproduced on this spiffy Criterion disc, which exhibits few blemishes and only minor edge enhancement during any decently lit action. Unfortunately, this strong visual presentation is somewhat marred by poor black levels, a heavy layer of film grain, and slight shimmering during more than one nighttime-set scene. Given the minimal score, the mono soundtrack is mainly asked to deal with quiet, atmospheric noises and dialogue, a task it ably handles.

Interviews are the main course on this somewhat meager single-disc edition of Le Samouraï. A 24-minute collection of archival interviews with Melville, Alain Delon, François Périer, Nathalie Delon, and Cathy Rosier are unenlightening and only moderately interesting, save for Delon haughtily gushing about his director on a talk show, Melville’s discussion about his recently burned down rue Jenner studios-including footage of him speaking about the fire while fireman work on the wreckage in the background-and the weird decision to have Melville occasionally talk from behind a giant oak desk à la The Godfather. New interviews with Rui Nogueira (author of Melville on Melville) and Ginette Vincendeau (author of Jean-Pierre Melville: An American in Paris) are more engaging supplements, with Vincendeau providing critical analysis of the film and Nogueira focusing most of his attention on historical background details regarding Melville’s career (and place in French cinema) and the production of Le Samouraï. In particular, both authors’ comments about the film’s ending (as compared to an alternate, more theatrical one that Melville ultimately decided to nix) are fascinating. A theatrical trailer is also included.

A poised tiger navigating an urban jungle, Delon’s samouraï is the epitome of noir cool.