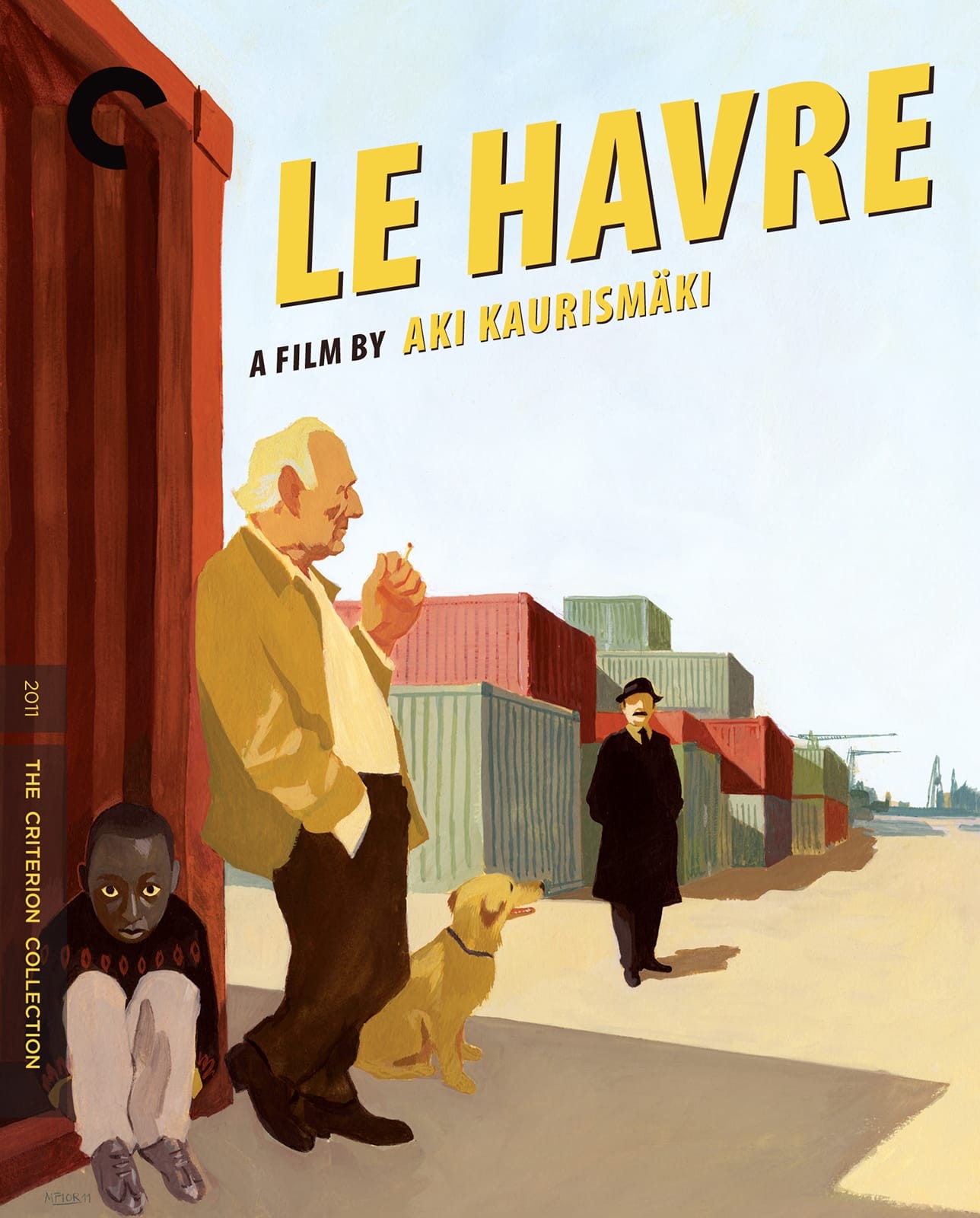 The cinema of Aki Kaurismäki is so often reduced to either deadpan machination or austere absurdity that it’s threatened to leave even the most unfortunate political or societal conditions which inspire these works completely unacknowledged. While he’s certainly dabbled in straight farce (his Leningrad Cowboys films are works of high, impressive buffoonery), the Finnish master’s best films have traditionally been those which parlay their nascent sociological themes into stark critiques of contemporary Europe without sacrificing the black humor which has painted the surface of his work for nearly three decades. Le Havre, Kaurismäki’s wonderful utopian fable from 2011, in many ways epitomizes this synthesis. Darkly comic and outwardly sensitive, but laced with anger and a passionate distrust of cultural strictures, the film embraces humanity over political precedence and ultimately arrives at a place of quiet resolve.

Another in a long line of Kaurismäki’s understated, proletarian fairy tales, Le Havre and its sympathies lie this time at the heart of the pointedly named Marcel Marx (André Wilms, reprising a character he first realized in Kaurismäki’s 1992 film La Bie de Bohème), an aging shoeshine who crosses paths with a young African refugee who quite literally floats into the port town of the film’s title. The plight of the young boy, whom Marx houses and hides from the local authorities, and the flames of immigration that the film stokes are fed through, on a macro level, the country’s cyclical enterprising, while Marx’s relationship with his wife (longtime Kaurismäki muse Kati Outinen), who quickly falls ill and is relegated to hospital care for much of the story, is dissected on a more micro level. Kaurismäki weaves and contrasts the idle lives of these and other townsfolk (a French-speaking immigrant of Asian descent at one point verbalizes one of the film’s major themes, answering that it’s “Hard to say, since I don’t exist,” in response to Marx as he queries his opinion on immigration), even as he speaks more broadly of a universal issue with intimate, even dyer, repercussions.

Kaurismäki’s uniquely referential style—with a Bressonian flair for narrative elision and an austere compositional sense, along with a Renoir-derived empathy for the working class and an Ozu-like eye for color coordination and detailed mise-en-scène—has surely played a part in the thematic ignorance which has greeted much of his work. But just as his narrative text inevitably translates as subtext, so too does his aesthetic drift from jarring to comforting to imperceptible as the viewer eases into his singular world. He and cinematographer Timo Salminen’s playful use of theatrical lighting and patterned color motifs play up a heightened reality (reminiscent in its best moments of Kaurismäki’s 1996 masterpiece Drifting Clouds, which thus far represents the apotheosis of these techniques), thus allowing his actors to imbue their creations with a warmth at times lacking in Kaurismäki’s more stilted characterizations while the less self-parodic dynamic and formal inflections of the narrative result in a freshness absent from the comparatively slight Lights in the Dusk.

If a less bleak outlook has breached Kaurismäki’s worldview over the last decade-plus (think of his 1990 classic The Match Factory Girl, which arrives at one of the cinema’s most blank conclusions), so too has this maturation manifest in a growing sympathy between character and composition, less a dialogue than a marriage of sensibilities at this point, represented to serene perfection by the film’s closing shot, an Ozu-nodding symbol of promise to the perseverance of true love and a grace note of uncommon delicacy. In a 2011 interview in Film Comment, Kaurismäki alluded to as much, stating, “Without the love story, one would’ve been forced to toughen up the justice part, and the descriptions of the system would have been harsher. The film as a whole would have been a couple degrees crueler.” What separates Le Havre from much of Kaurismäki’s prior work, and thus elevates the film to the top tier of his filmography, is the seamless way he braids these seemingly oppositional narrative strands into a beautiful whole. If the fusion is so expert, so unassuming in its cohesion, that he risks translating his message to more casual viewers, then the inherent power of the filmmaking carries that much more potential to quietly stun those attuned to its utopian underpinnings and universal displays of humanity.

Criterion has done its part over the last few years in bringing the cinema of Aki Kaurismäki to a wider American audience with their two Eclipse sets dedicated to the director’s early work. But with their release of Le Havre, they’ve finally brought the filmmaker into the high-definition landscape, debuting his most recent film in a wonderful 1080p transfer. More so than most filmmakers, Kaurismäki utilizes a very precise, heightened color palette, and this high-def digital transfer translates these primary hues to rich effect. Many indoor scenes are tinted teal, almost metallic (a look Kaurismäki claims to have been influenced by Jean-Pierre Melville), while outdoor sequences are provided with the appropriate depth and warmth. Overall, they’ve done justice to a uniquely visual film.

Sound, meanwhile, is given a DTS-HD Master 5.1 makeover, and while this is a mostly dialogue-driven film, Kaurismäki’s sharp deployment of sounds and dislocated effects is handled adeptly by the mix. A concert sequence late in the film gives the rear channels more of a work out, while the center channel deploys dialogue with a crisp, uncluttered authority. Optional English subtitles are accurate when translating the film’s French, regional dialect.

Interviews, interviews, interviews. Beginning with nearly an hour of hilariously flippant press-conference footage from the film’s premiere at the 2011 Cannes Film Festival, the extras thoroughly cover the question and answer gamut. Kaurismäki takes the lead for most of the Cannes queries, but both André Wilms and Kati Outinen are given time to expound on the experience in their own separate interview segments. Wilms speaks to the Criterion Collection in a new interview commissioned for this release, while Outinen is featured in a lengthy 2011 sit-down on a Finnish television series, covering her entire career and her working relationship with Kaurismäki in the process. Video extras are rounded out by a two-song set by Little Bob, the musician featured in the film. Another typically lovely and beautifully illustrated booklet augments the package, including an informative essay by Michael Sicinski and the aforementioned Kaurismäki interview from Film Comment.