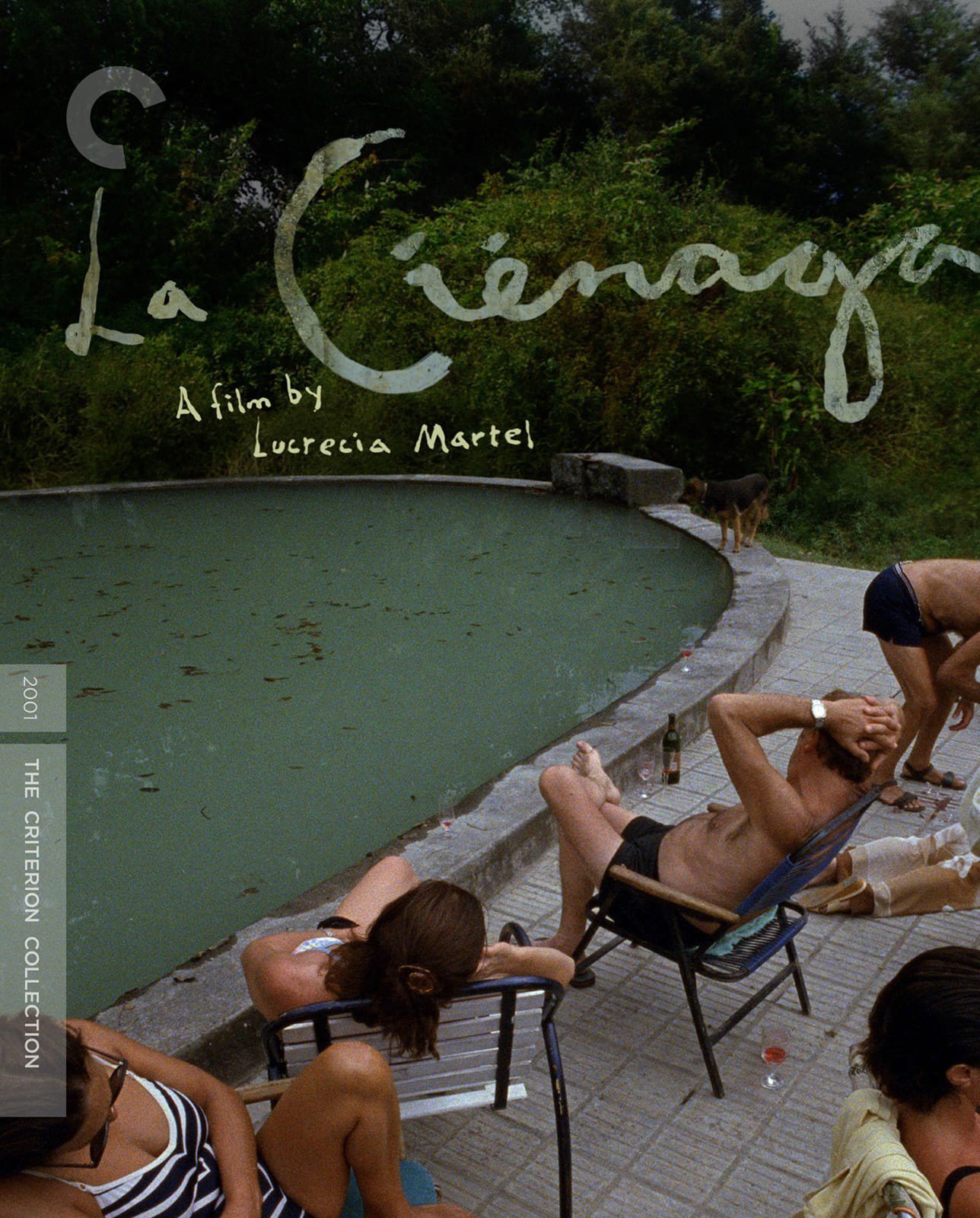 The humidity in La Ciénaga is so palpable it’s a wonder the screen doesn’t peel. Even the title credits look affected by the moisture in the air, gradually coalescing from puddles into words. The film takes place on the country estate of a bourgeois Argentinian family who retreat to their villa to escape the city heat, a move whose futility can be traced in the beads of sweat on every character’s face. Lucrecia Martel establishes the home with symbolic decay centered on a large, unused pool discolored from lack of care and teeming with leaves and untold numbers of mosquito eggs. Within seconds, Martel captures a sense of faded aristocracy, of a loss of status that certain families suffered generations ago that nonetheless weighs heavily on family members long removed from their noble past.

Around the fetid, stagnant pool sits a middle-aged couple and their friends, whiling away the time guzzling wine like water. As swiftly as she uses the country home to impart a sense of social and historical context, Martel frames the characters in such a way that the film attains a comic tone that suggests the demented family crises of Chekhov by way of the expressionistic grotesquerie of Buñuel. Long shots from high angles arrange the sunbathers like scattered corpses, atrophied beings whose only fully operable joints are the elbows that raise wine glasses to lips. Close-ups home in on sagging breasts, bulging bellies, and topographic outlines of stretch-mark rivers and hilly cellulite, all unflattering confirmations that these characters’ best days are behind them.

The narrative, such as it is, shifts into motion when Mecha (Graciela Borges), the family matriarch, falls while cradling several wine glasses and cuts herself, prompting numerous family members to converge onto the estate to be with her as she convalesces, among them Mecha’s eldest son, José (Juan Cruz Bordeu), and her cousin, Tali (Mercedes Morán), who arrives with her husband, Rafael (Daniel Valenzuela), and their children. Normally, this influx of dysfunctional family members would light a long fuse leading to a climactic powder keg, but the film diverts a protracted escalation of tension with the immediate outbreak of smaller fires that send the camera scurrying back and forth between various displays of interpersonal friction. An incestuousness runs between immediate and extended family members, and even partners from outside the family are drawn into the family’s insular sexual tension, as when Tali notes that Mecha’s husband, Gregorio (Martín Adjemián), cheated on his wife with, among others, José’s current partner. Tali frets over the possible revelation of this, but, in another thematic diversion, this mainly illustrates the power dynamics between Tali’s submissive relationship to Rafael versus Mecha’s consolidated control of her own husband.

The film takes numerous detours with individual characters, but the through line that links all of them is the family’s racism toward its servants, all indigenous aborigens whom the family members constantly accuse of theft and laziness. Mecha in particular cannot speak to or about one of the servants without lobbing accusations or criticizing them for not taking care to every single need in her life. Even Mecha’s teenage daughter, Momi (Sofia Bertolotto), who shares a close bond with head maid Isabel (Andréa Lopez), casts aspersions on the woman for lingering by a wardrobe for too long. Both Momi and José exhibit an eerie possessiveness of Isabel that warps fondness, even desire, around power: Momi regularly slips into Isabel’s bed without her permission, tacitly viewing the servant’s quarters and the servant who lives in them to be her property. José, meanwhile, starts a fight with Isabel’s boyfriend simply because she talks to that man instead of him, betraying his resentment that she should focus her attention on someone less worthy. It’s here that the film’s study of a rotting bourgeoisie comes into greatest clarity, and after a time, one gets the impression that the family accuses the servants of stealing so much simply because they now have to provide a wage for those who once would have been slaves.

On paper, all of this sounds like a work of social realism, albeit of the satiric variety, but Martel uses her debut to introduce a number of visual tics that lend the film an idiosyncratic edge. Like Bresson and Kiarostami, she employs ambient noise to triangulate off-screen space, but she also heightens rainforest sounds and dripping water to the point that it becomes a kind of torture, communicating dread more than simple place. Martel also displays an unorthodox method of shooting close-ups, preferring to crop at least part of a person’s head out of frame despite an abundance of available negative space. This lends the whole film a woozy, vaguely unsettling air that mimics the characters’ malaise, as well as their inability to find their appropriate place in the present world. This omissive style peaks in the L’Eclisse-esque finale, in which Martel crops the people out of the frame entirely as the camera regards the country home one last time. The human vacancy of Antonioni’s film bleakly confronted a future beyond its characters’ understanding, however, while Martel’s recapitulates a recent and deep history that is, troublingly, no easier to solve.

Hugo Colace’s muted cinematography previously appeared washed-out on prior home-video releases, but Criterion’s Blu-ray preserves its rich textures and exceptional detail. The transfer proves its worth within the film’s first few minutes, capturing every skin discoloration or loose patch of flesh on the shiftless adults, as well as the verdant, mud-slicked areas on the surrounding grounds. Colors are perfectly balanced, and healthy grain ensures that even the most sweat-slicked face never looks smooth or unnatural. The lossless stereo track likewise highlights the care that went into the sound design, maximizing the film’s enveloping unease.

An interview with Lucrecia Martel delves into the director’s approach to filmmaking, as well as autobiographical details that shaped her consciousness and ethos. It’s a dense feature, and Martel’s own eloquence neatly summarizes a complex artistic process even as she delivers it all with poetic diversion and metaphor. Andres di Tella, cofounder of the Buenos Aires International Festival of Independent Cinema, narrates a video essay in which he delineates Martel’s debut from other New Argentine films, highlighting how her character-based social commentary differed from the polemic, lecturing tone of many of her peers’ post-dictatorship work. The disc also comes with a trailer, and a booklet containing an essay on the film by University of Buenos Aires professor David Oubitia.

Criterion is long overdue for more canonization of South American cinema, and Lucrecia Martel’s strange, aesthetically and thematically intricate debut feature is one of the most energizing additions to the company’s roster in some time.