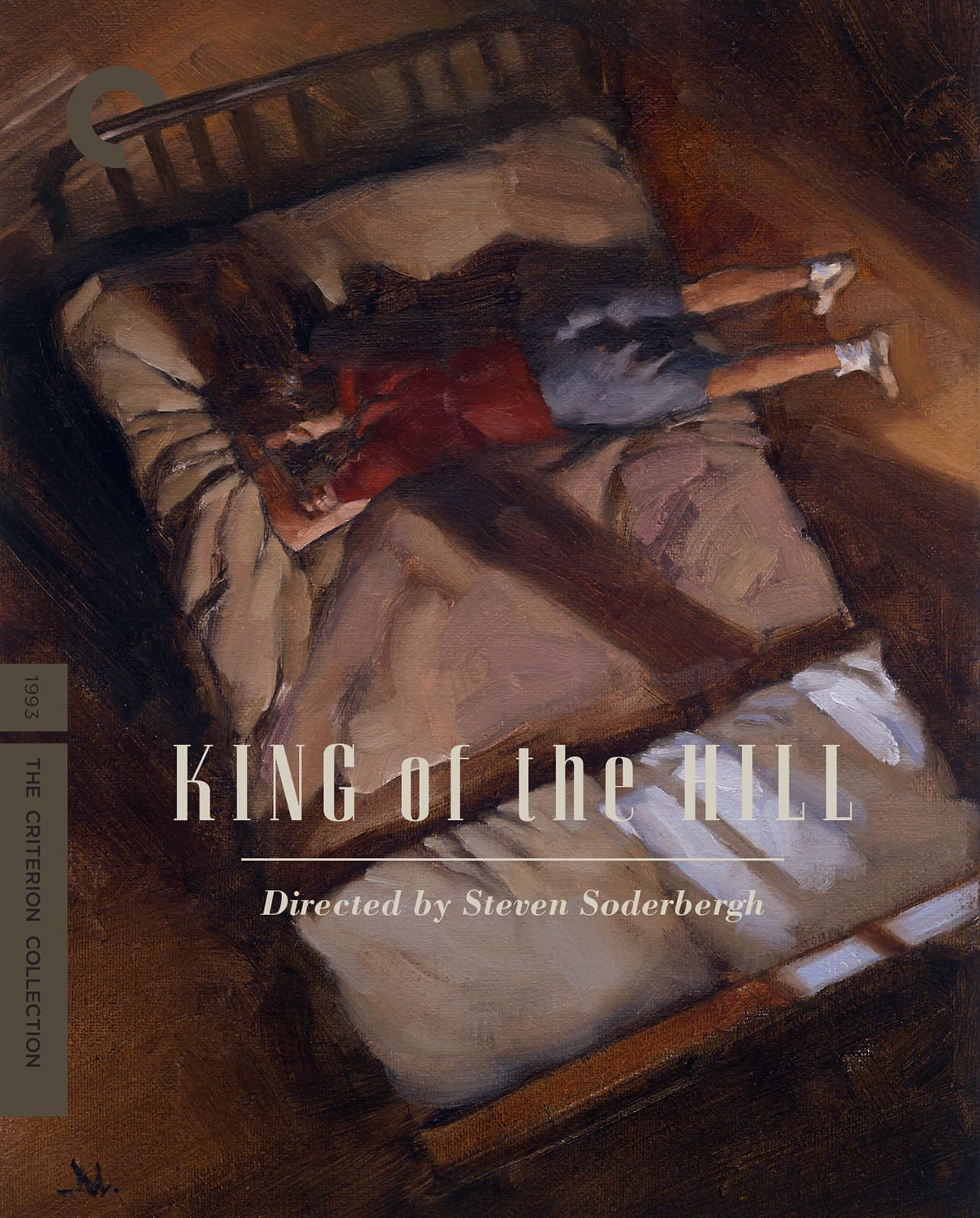 Adapted from A.E. Hotchner’s account of growing up during the Great Depression, King of the Hill has a subject that readily invites the indulgences of the usual bromides concerning hope and the pluckiness of the human spirit and the indomitable wonder of children. One can easily imagine the fraudulent, greatly profitable con job that a Ron Howard might have made of it, but there’s a lucid pragmatism coursing through King of the Hill, familiar to most of director Steven Soderbergh’s films, that resists unearned sentiment. That pragmatism has often been criticized as cold or even cruel, but it’s actually an indication of a deep well of qualified humanity. Soderbergh allows his characters breathing room as well as an air of mystery; he doesn’t reduce or condescend to them (or us) with pat explanations.

We directly experience the ravages of the Depression through the point of view of 12-year-old Aaron Kurlander (Jesse Bradford), but there’s also a suggestion of hindsight, as if the film’s perspective is partially shared by a future Aaron who’s looking back on his past with heartbreak and wry amusement. Moments that might normally lend themselves to conventional warmth are often unsettling because they’re marked by this impression of creeping, dreadful retrospection, particularly the passages near the beginning in which Aaron plays with his little brother, Sullivan (Cameron Boyd), in the street as they walk home from school.

Soderbergh covers these encounters with distant mid-to-master shots that compel an examination that resists the tear-jerking empathy that Cliff Martinez’s poignant score encourages, and this contrast establishes a prevailing push-and-pull effect that never entirely allows you to get comfortable with the film’s tone. On the periphery of these childhood reveries, often near the fringes and far foreground of the frame, are where the telling details of the larger world of the Depression quietly seep through, such as images of people matter-of-factly looking for food and work on the streets. This portentousness soon yields its first narrative catharsis when Aaron and Sullivan return home to their quarters on the third floor of the unkempt and rapidly emptying Empire Hotel to discover that their out-of-work door-to-door salesman father, Mr. Kurlander (Jeroen Krabbé), has decided to send Sullivan away to stay with relatives for a while.

The decision makes fiscal sense. The Kurlander family is starving and can use all the assistance it can muster, but there’s a smack of cruelty to it, as Mr. Kurlander has stripped Aaron and Sullivan apart with no apparent respect for the comfort they provide one another in the midst of the unrelenting drudgery of poverty. In fact, Mr. Kurlander often appears to serve as the human embodiment of the perverse luck that hounds Aaron all through the film: He’s eventually revealed as loving, to an extent, but he demands from his son a series of ambiguous challenges that must be completed in order to allow Aaron to arrive at the comfort that his snobbish blueblood classmates take for granted.

Sullivan’s departure marks the beginning of a rapidly accelerating strife that will strip everything from Aaron. Obviously a warm, bright child, Aaron discovers that he’s a human being of profound strength and invention. Eventually reduced to living alone in a room that no longer belongs to him, eating cut-out magazine pictures of a delicious steak dinner that appears to mock his dire straits, his stomach cramping from the consumption of the paper and from the onset of starvation, Aaron retreats to his interior flights of invention for refuge. In a hallucination scene of amazingly precise formal construction (which anticipates a number of the director’s future projects while priming you for the Soderbergh adaptation of The Sound and the Fury that’s, sadly, never been considered), Aaron seizes upon his rage, primarily at his father, and transcends it.

Soderbergh understands something, in his pragmatist empathy, that many conventionally minded filmmakers would miss: that there’s a sense of puzzle-solving exhilaration to Aaron’s misery. Aaron’s youth serves him because he can fashion the loss of his family and the shortage of food into a game that keeps the inherent challenges in front of him while minimalizing the stakes just enough to render them palatable. Aaron’s plight is an adventure not so awfully removed from the stories he contrives for his classmates—full of daring deeds and vivid supporting characters such as Lester (Adrien Brody), Aaron’s cool, older bad-boy friend, and Mr. Mungo (Spalding Gray), an unusually sympathetic embodiment of the wealth that blew away with the stock-market crash. Aaron doesn’t pity himself because there’s no time for it, and because the principle of pity doesn’t even seem to be a part of his remarkable constitution, and that lack of self-importance complements Soderbergh’s own clear-eyed aversion to melodramatic hyperbole.

King of the Hill ultimately has a familiar shape, though, and that might be why the filmmaker evinces such an obvious and unwarranted discomfort with the film in the interviews included with this Blu-ray. It’s a coming-of-age story, and everything in the movie prepares you for the final images of the family reunited and particularly for the last scene between Aaron and his father, where the selfish parent understands the full extent of his son’s resources, and symbolically recognizes that his son’s a man. This type of narratively obligatory communion might retrospectively chafe Soderbergh, who’s grown into a specialist of interior disconnection and introversion, but he earns this closure because he’s rendered Aaron’s pain so vividly and coherently up to this point that we recognize this bliss, in the tradition of all human bliss, for what it truly is: fleeting.

Supervised by director Steven Soderbergh, this 2K resolution digital transfer is impressive even for the Criterion Collection. The results are transformative, emphasizing the film’s lush colors and immersive attention to textural detail with a vibrancy that wasn’t even suggested by the VHS edition. Some occasional softness, but that’s probably intentional. The English 5.1 DTS-HD Master Audio surround mix is similarly rich and crisp, and particularly expands on the depth of the soundtrack with a subtle accentuation of the little diegetic details, such as the blaring of car horns, the crunching of feet on the debris-littered streets, and so forth.

The most unexpected and generous get here is the entirety of Soderbergh’s fourth film, The Underneath. It looks great, but the almost pointedly empty and unconvincing noir is interesting only for retrospectively charting the director’s evolution as an artist, as its failed experimentation would soon lead to thematically and formally similar gems like The Limey and Haywire. Two new excellent interviews afford Soderbergh the opportunity to discuss both King of the Hill and The Underneath in the context of his first four films, which also include Sex, Lies, and Videotape and Kafka. Soderbergh is perceptive and allergic to platitude, as usual, though it’s a little dispiriting to hear him essentially reduce King of the Hill to a footnote in a career that would yield greater victories. The filmmaker’s mercilessness regarding The Underneath, however, is fully justified, often amusing, and of potentially great use to blossoming filmmakers.

The interview with author A.E. Hotchner provides additional context on the lives that inspired his book, sadly confirming that the mini-closure implied to have been reached by the characters at the end of the film never entirely occurred in reality. (His remarks pertaining to his brother are particularly bittersweet.) “Against Tyranny” is a remarkable work of visual criticism that deconstructs King of the Hill’s hallucination sequence, highlighting its subtle encapsulation of the protagonist’s evolving emotional health. Rounding out the package are trailers and a booklet that includes an essay by critic Peter Tonguette, another superb interview with Soderbergh conducted near the initial theatrical release of the film, as well as a portion of Hotchner’s memoir. One could be greedy and regret the absence of a full-length audio commentary by Soderbergh, but that would almost be looking a gift horse in the mouth.

This unjustly obscure film, a key work in the development of one of the most important voices in contemporary American cinema, receives the Criterion red-carpet treatment it has long deserved.